Haley Anderson’s father brought friends and family to tears Sunday as he delivered an emotional eulogy describing what a ‘joy’ and ‘light’ his daughter was.

More than 1,000 mourners gathered at Donohue Cecere Funeral Home in Westbury, Long Island on Sunday morning to say goodbye to the 22-year-old nursing student, who was found strangled March 9 in the bedroom of an ex-lover and classmate who had become ‘obsessed’ with her.

Anderson’s father, Gordon Anderson, delivered the heart-wrenching 40-minute eulogy reflecting on the moment he had to clean out his daughter’s bedroom following her death.

‘A quick look about gave great insight into who she was and where she was going: light colors, dreamcatchers, collectibles, keepsakes from good times. The room spoke of happiness, dreams, aspirations, and joy,’ he said, according to the New York Post.

‘Over the window, straight ahead as you walked in, cut out of wood and painted purple, was the word ‘love’. 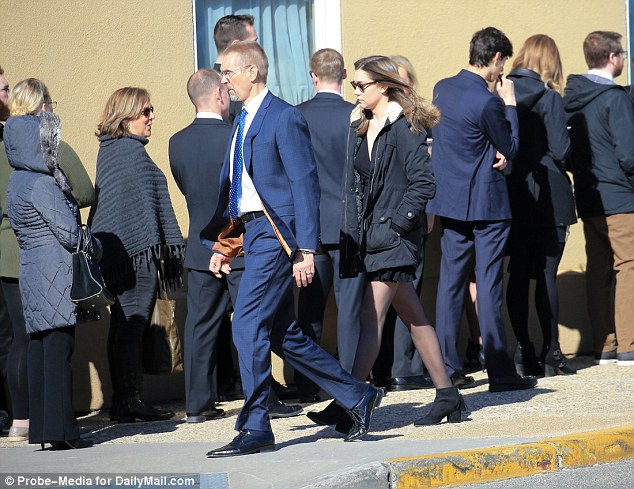 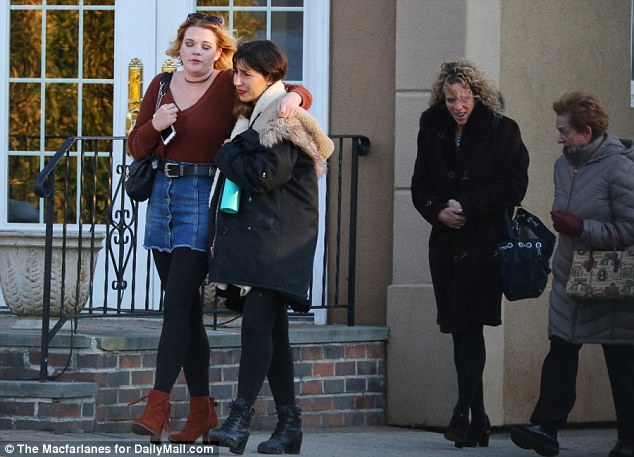 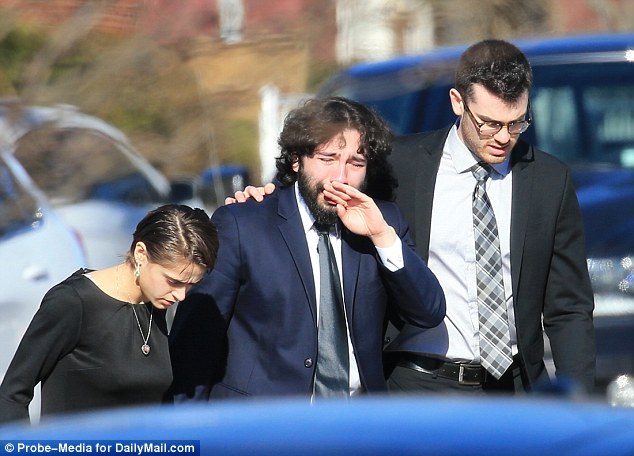 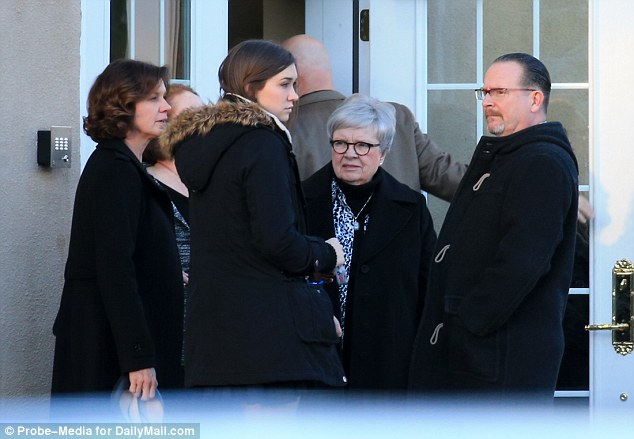 Anderson’s father, Gordon Anderson, gave a heart-wrenching 40-minute eulogy describing what a ‘light’ and ‘joy’ his daughter was. Pictured are mourners at the young woman’s funeral 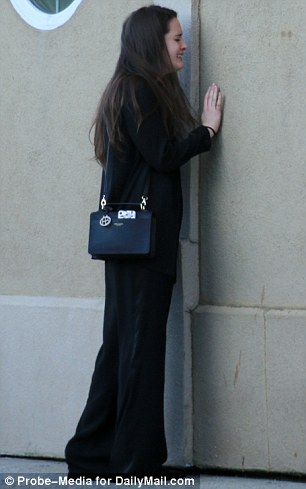 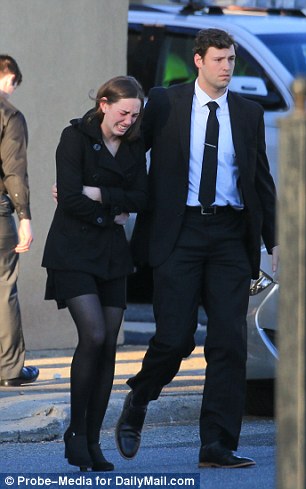 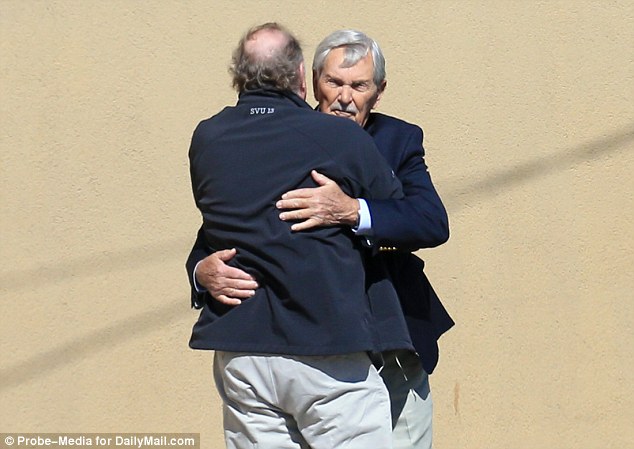 More than 1,000 people attended the young woman’s funeral on Sunday

The grieving father encouraged gatherers to ‘try and keep that joy when you leave’.

‘Leave here with a smile and that warmth that comes with it. Because, simply, that’s what Haley would have wanted,’ he said.

Mourners sobbed as Gordon Anderson spoke about his daughter. The girl’s mom, Karen, and sister, Maddie ‘wept and trembled’ in the front row,’ the Post reports.

Friends, family and classmates of Anderson’s were seen embracing and crying outside of the funeral home.

After her death he fled the country to Nicaragua where he has dual citizenship, and was arrested by Nicaraguan authorities Tuesday.

However, a police report filed on September 16, six months before her death, reveals Anderson was suspicious of Tercero’s violent nature. 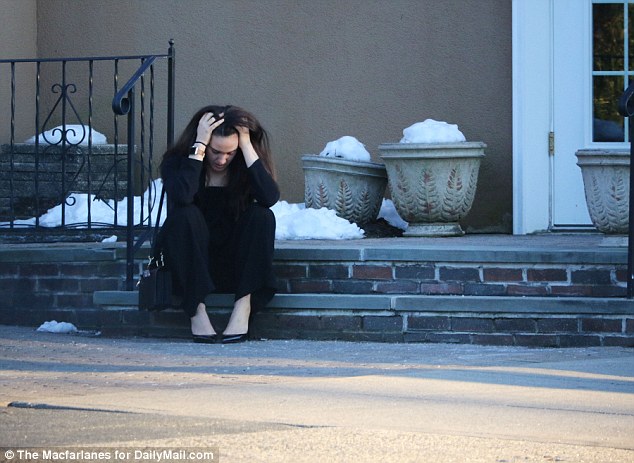 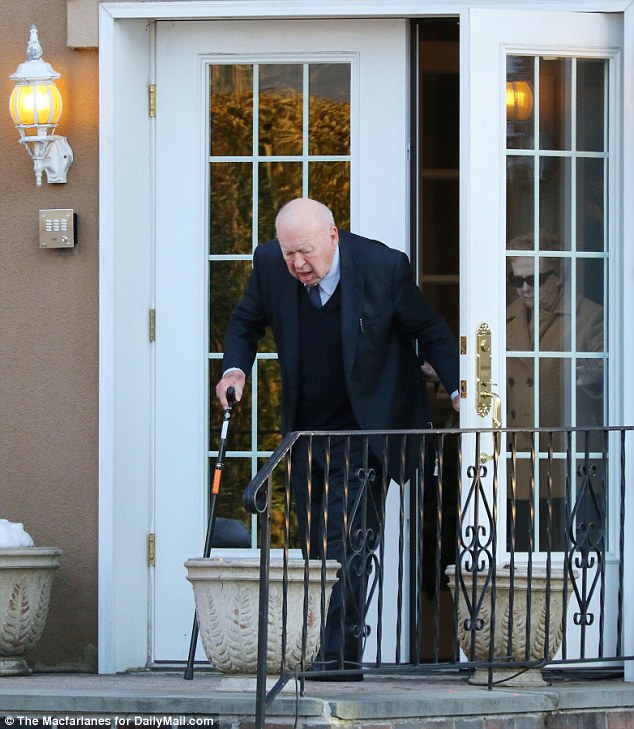 Leave here with a smile and that warmth that comes with it. Because, simply, that’s what Haley would have wanted,’ Anderson’s father Gordon told mourners 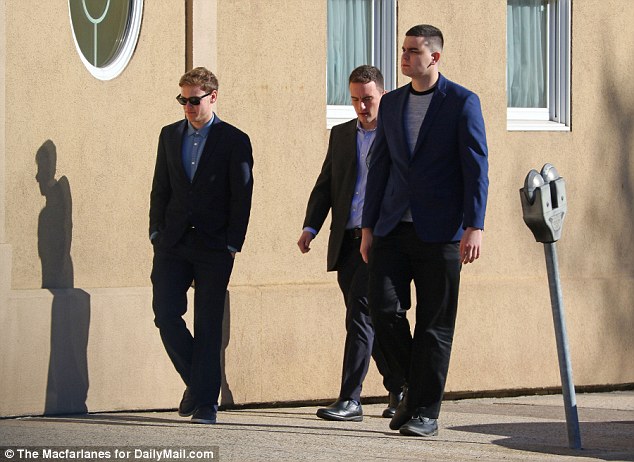 Anderson was a nursing student at Binghamton University in New York. She was found in the bedroom of her classmate who is said to have become ‘obsessed’ with her 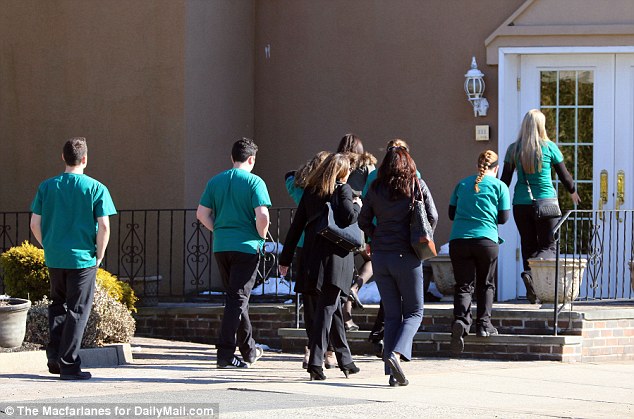 According to the report obtained by WBNG, Anderson believed Tercero, 22, was behind the slashing of all four of her car tires after the two got into a spat the day prior at a party at his home.

At the party Tercero, with whom she had a previous relationship, got mad at her. He angrily confronted her and shouted at her, supposedly angry at her for dating her on-and-off boyfriend.

He then tried to make amends by pouring shots for Anderson and her friends.

He drank too much and became sick. Anderson reportedly helped him get into bed.

The next morning she found her tires flat.

‘Haley stated that she believed but wasn’t sure, that a male named Orlando Tercero, may have been involved with the damage of her vehicle,’ the police report sates.

‘Haley stated that she and Orlando dated for a short time, and that she had gone to a party at his house, 23 Oak St, on 09/15/17. She stated that Orlando had confronted her about dating his friend, her now boyfriend, and that he got very upset and was shouting at her,’ the report said. 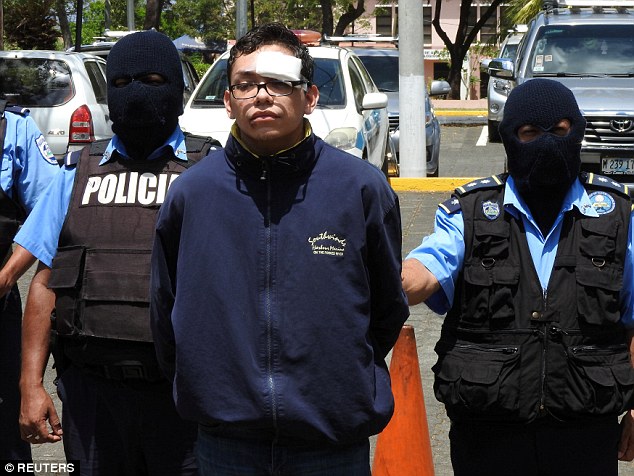 Tercero has been charged in Anderson’s murder, and was detained by Nicaragua police on Tuesday. He is pictured sporting a head wound and a fat lip 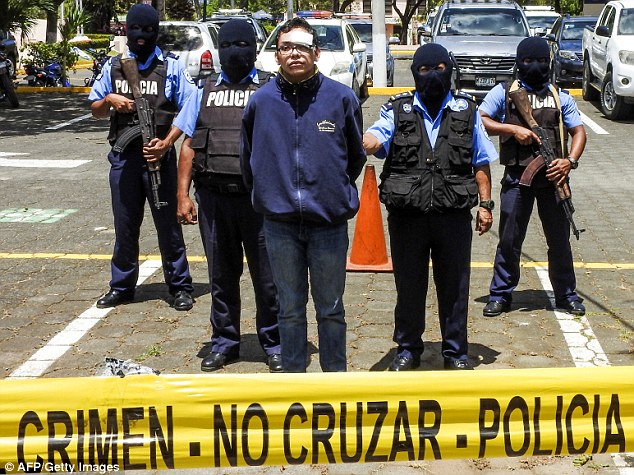 Tercero was photographed surrounded by armed police in balaclavas, bleeding from the lip with a bandage across his left eye 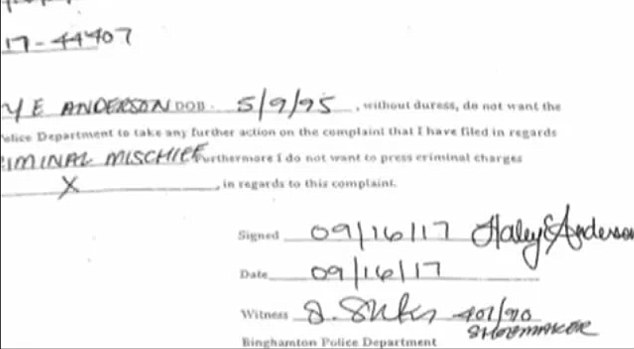 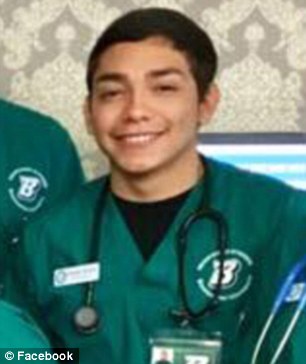 Orlando Tercero, 22, has been charged with second-degree murder

‘While I (the investigator) deposed Haley, she advised that she believed that Orlando may have slashed her tires but that she wasn’t sure, and that she did not wish to pursue charges for the damage to her vehicle at this time,’ the report added.

Anderson posted a video of the slashed tires on Snapchat, to which Tercero replied saying his rear tires were also slashed.

He then sent her a screenshot of text messages he sent to his roommates asking if they had slashed his tires.

When she said she was going to file a police report, he said it wasn’t a good idea.

He himself never reported the incident to police.

She told police she would sort out the matter between Tercero and herself. 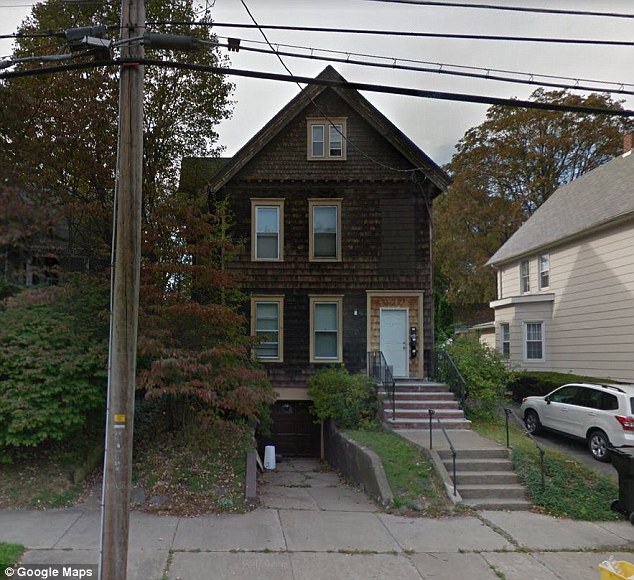 Scene of crime: This is the home where friends found Anderson’s body in Tercero’s bed 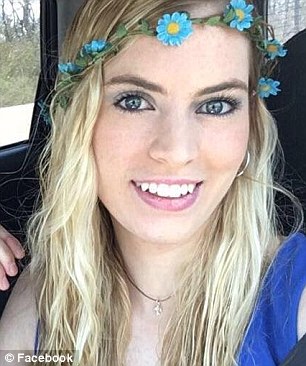 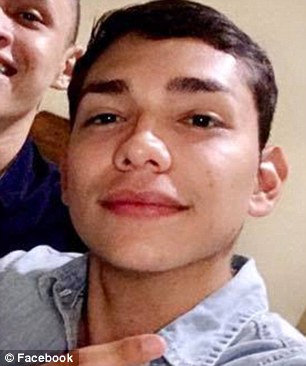 Anderson, left, and Tercero, right, had dated. In September he got mad at her for dating her boyfriend and yelled at her at a party. The next day he allegedly slashed her tires 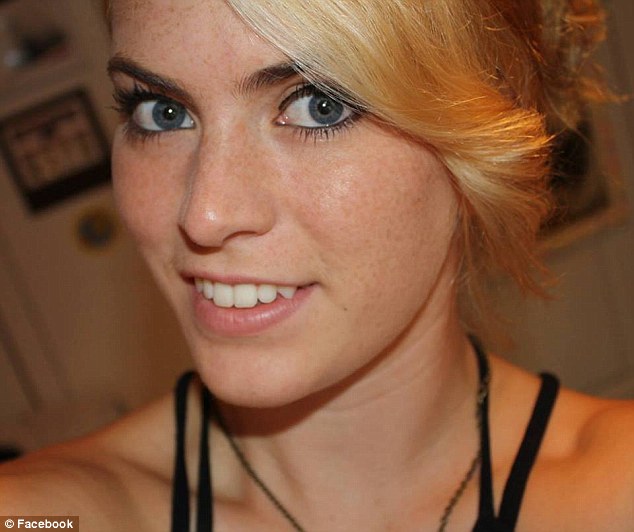 She reported to police that she suspected Tercero was behind the slashing of her car tires and posted a video of it on Snapchat, to which he replied his tires were also slashed

Tercero was arrested on Tuesday by Nicaragua National Police in connection to Anderson’s death, according to ABC News.

A photo of his arrest shows Tercero with a bandage across his left eye and a busted lip surrounded by Nicaraguan police wearing balaclavas.

Before he fled to Central America he reportedly told his sister that he had done ‘something bad’ and was a ‘disgrace to the family’.

‘Orlando is being detained by Nicaraguan authorities while matters are being further investigated,’ his attorney, Michael Bachner, told the New York Post.

Police are seeking to extradite Tercero. He was charged with second-degree murder in Anderson’s death on Saturday.