Hero father or skatepark villain? Dad seen CHOKING a boy and throwing another down a half-pipe was ‘defending his son from bullies’

By Lauren Ferri and Camilla Theakstone For Daily Mail Australia

A father seen grabbing one boy by the throat and pushing another down a half-pipe before hurling their scooters in the air says the violent showdown was a result of the kids bullying his son.

A group of 12-year-old boys were at a skate park in Lismore, in New South Wales’ north-east, when they began to verbally abuse and threaten another 12-year-old boy on Sunday afternoon.

According to police, the youths chased the boy up the street before they returned to the skate park.

The footage reveals the visibly upset man grab one boy by the throat before shoving another kid to the ground, down a half-pipe

The lone 12-year-old boy then returned to the skate park accompanied by his father.

The group of youths began to taunt the boy again before the father got involved to defend his son.

Disturbing footage of the violent incident was posted to North Coast Crime Facebook page on Wednesday.

The man can be seen grabbing one boy by the throat before shoving another kid to the ground, down a half-pipe.

During the man’s outburst, kids can be heard screaming in fear, trying to defend their friends.

‘Leave him alone!’ one young bystander yells, after the man grabs the boy’s throat.

The person who filmed the footage runs away as the man goes on the rampage, to avoid being confronted. 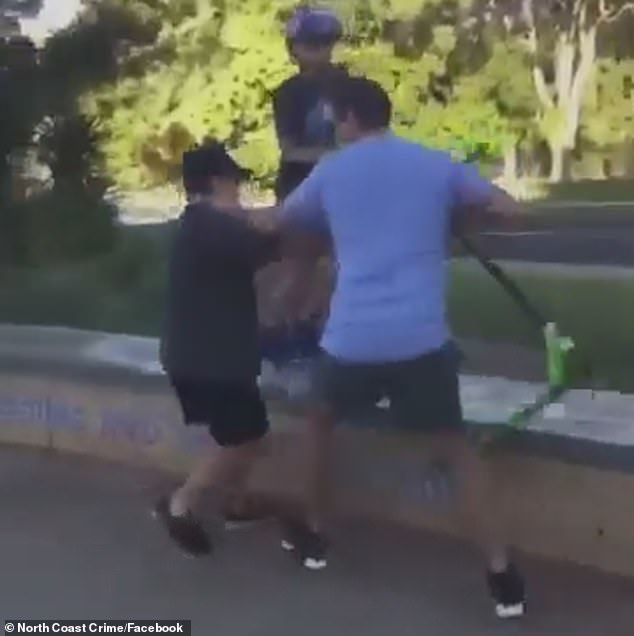 ‘Leave him alone!’ one young bystander yells, after the man grabs a boy by the throat

After the man abuses the kids, he then snatches scooters belonging to the boys and throws them metres into the air, with one landing outside of the skatepark.

Multiple local residents in the town claim that the man’s violent outburst was in retaliation after his kid was allegedly bullied by the group.

Officers from Richmond Police District have commenced an investigation and urge anyone with information to come forward. 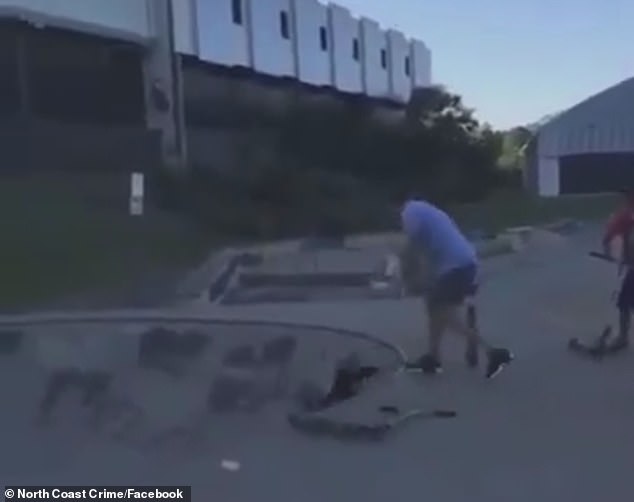 After the man abuses the kids, he then finally snatches scooters belonging to the boys and hurls them metres into the air, with one landing outside of the skatepark