Daily Covid cases collapse by 41% in a week to just 66,183 and admissions drop 13% as UK’s Omicron wave continues to fizzle out

Government dashboard data shows there were 66,183 new positive tests logged over the last 24 hours, down 41.1 per cent on the 112,458 recorded last week. It was the lowest daily infection figure on a Tuesday since December 14 — towards the start of the Omicron wave.

The number of people admitted to hospital with the virus also fell, dropping 12.8 per cent to 1,421 on February 3, the latest date data is available for.

But deaths increased for the first time in six days today, increasing 43.4 per cent from 314 last week to 219. The number represents the amount of deaths recorded today — not the total that actually occurred. Covid deaths by day of occurrence have been dropping for more than a week, as the UK continue to emerge from the winter wave.

The figures come after Sir Chris Whitty wrote an open letter to NHS medics to tell them they have a ‘professional responsibility’ to get vaccinated against Covid.

Sajid Javid last week performed a last-minute U-turn on the controversial ‘no jab, no job’ policy for health workers over fears it would leave hospitals short staffed. Up to 80,000 unjabbed workers faced being fired because of the rule, which would have meant they needed two doses by April 1 to keep their job. 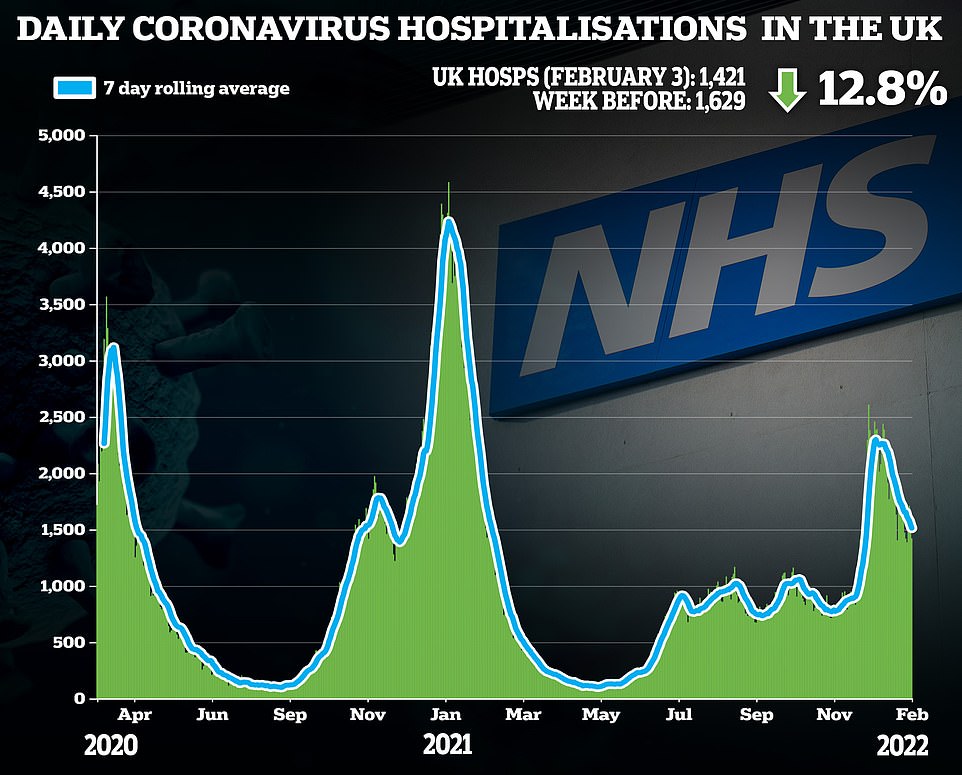 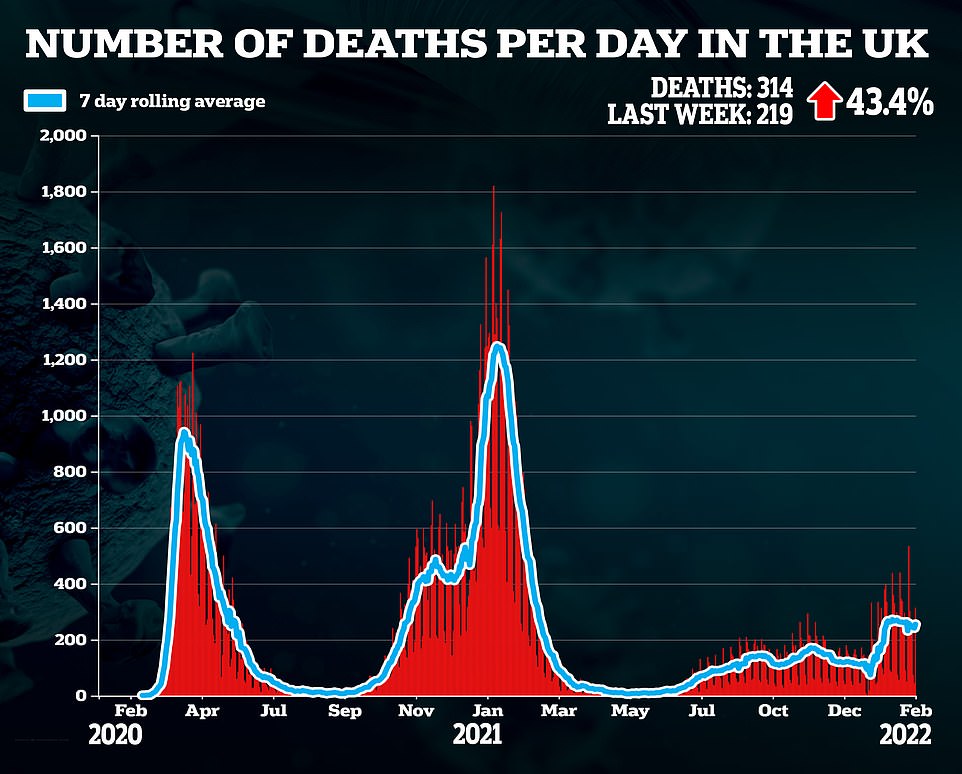 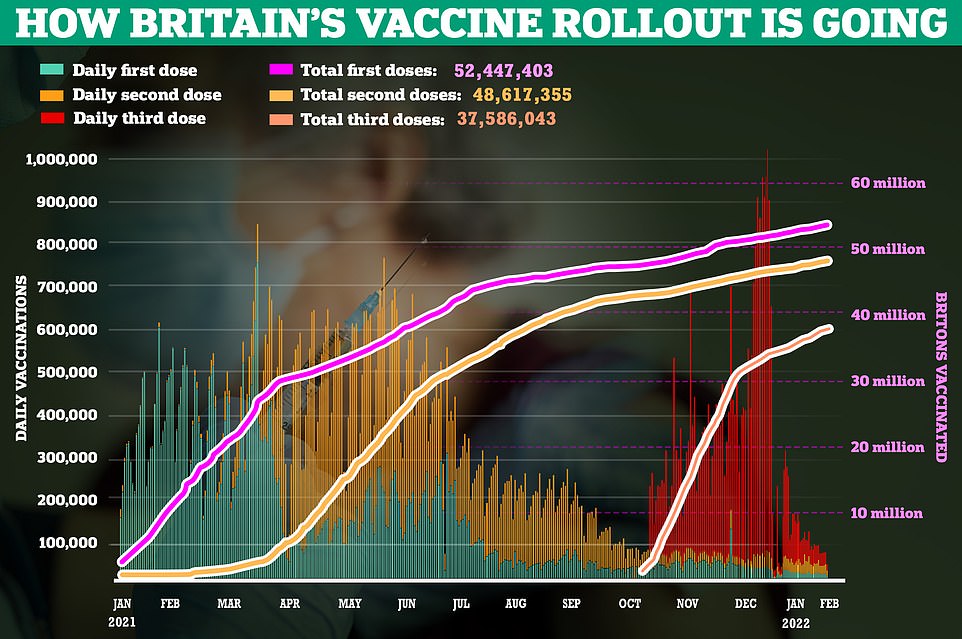 Ministers today promised to wipe out one-year waits for operations as the Government finally published its long-awaited blueprint to tackle record NHS backlogs caused by the pandemic.

Unveiling the multi-billion pound National Recovery Plan in Parliament, the Health Secretary Sajid Javid said that ’99 per cent’ of patients in England will wait less than 12 months for elective treatment by March 2024.

Latest figures show more than 300,000 people have been languishing in queues for routine operations for at least a year — an almost 200-fold rise compared to the 1,600 before Covid struck.

Running to more than 50 pages, the recovery plan promises to scrap waits of over 18 months by April 2023 and waits over 65 weeks by the following year, with ‘nobody’ waiting longer than a year by 2025.

However, the targets are predicated on ‘maintaining low levels of Covid’ and could be abandoned in the event of another serious outbreak. And there is no concrete recruitment targets over the next three years.

Labour said it fell ‘seriously short of the scale of the challenge facing the NHS and the misery affecting millions of people stuck on’ waiting lists and criticised the lack of a plan to address staff shortages.

The Society for Acute Medicine warned the programme ‘will fail’ unless the Government gets a grip on the crisis in A&Es, which is forcing the cancellation of planned operations and seeing record numbers of emergency patients take elective beds.

Today’s Government data also showed there were 32,627 booster doses dished out today. It takes the UK’s total up to 37.6million people.

Sir Chris, England’s chief medical officer, publicised his letter to NHS colleagues urging them to take up the offer of a jab to protect their patients.

He wrote ‘questions of professional responsibility and legal mandation are separate’, arguing the public expect staff caring for their vulnerable relatives to do everything in their power to avoid passing on the virus.

While admitting jabs do not provide ‘absolute’ protection against infection, he said they do minimise reduce the risk, particularly after a booster dose.

Writing in the letter, Sir Chris said: ‘Our professional responsibility is to get the Covid vaccines as recommended, to protect our patients.

‘At the same time the vaccine protects us. The great majority of healthcare workers have already done so.

‘We hope those of you who have not will consider doing so now.’

Sir Chris said discussions around responsibility came before those about compulsory jabs, with all ‘professional bodies, Colleges [and] regulators’ agreeing medical staff have a duty to get vaccinated.

He said: ‘The public reasonably expect it of those who care for them or their vulnerable relatives because it is one of the simplest things that we, as healthcare workers, can do to protect patients.’