Expectant mothers with high blood pressure are 39 percent less likely to develop the condition if they take a low dose of the painkiller every day, a US study found.

Aspirin is thought to improve blood flow that becomes blocked in pre-eclampsia sufferers.

Pre-eclampsia affects around three percent of pregnant women in the US and raises the risk of type 2 diabetes, kidney disease and blood clots.

It is responsible for up to 15 percent of deaths affecting expectant mothers worldwide.

Pre-eclampsia is a serious condition of pregnancy, and can be particularly dangerous because many of the signs are silent, while some symptoms resemble ‘normal’ effects of pregnancy.

Symptoms include high blood pressure; swelling around the face, eyes or hands; headaches; nausea or vomiting; changes in vision; and shortness of breath.

Pre-eclampsia is detectable through regular medical appointments that measure blood pressure, protein in the urine and weight gain. It is treated via medication and dietary changes.

The condition typically occurs after 20 weeks of gestation and up to six weeks postpartum (after delivery), but it can also occur earlier than 20 weeks.

Pre-eclampsia and other hypertensive disorders of pregnancy are believed to be responsible for 76,000 maternal and 500,000 infant deaths each year across the world.

Aspirin may only benefit women with pre-existing high blood pressure

This includes women with risk factors for pre-eclampsia, such as a personal history of the condition.

The researchers believe their findings suggest pre-eclampsia may be brought on in a variety of ways in different women and aspirin may not benefit all sufferers.

The researchers add there is not enough evidence to dispute this.

Lead author Dr Alisse Hauspurg, from the University of Pittsburgh, said: ‘I don’t want to jump to conclusions.’

The findings were published in the journal Hypertension. 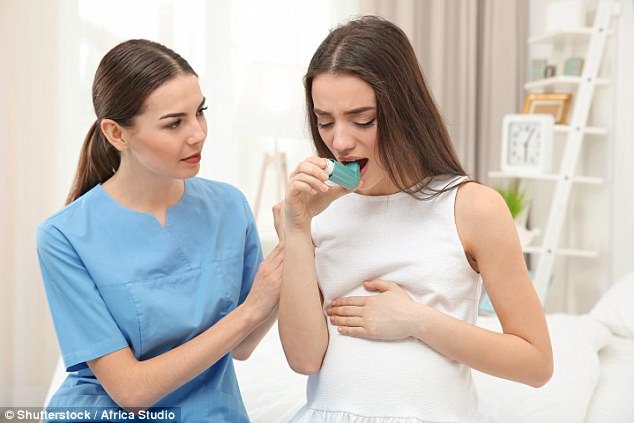 All of the women had pre-existing high blood pressure, which was considered relatively severe.

They took a 60mg dose of aspirin every day. Between 81mg and 160mg is considered an average dose.

They are also at a raised risk of having a cesarean section, underweight baby and short pregnancy, a study found.

The study did not discuss why asthma increases women’s chances of suffering certain pregnancy complications, however, previous research suggests it may be due to the steroid medications patients are often prescribed.