It was almost possible to feel sorry for Labour’s acting leader Harriet Harman, who had the hopeless task of replying for her party

After such a Budget, it was almost possible to feel sorry for Labour’s acting leader Harriet Harman, who had the hopeless task of replying for her party.

True, George Osborne blithely ignored crises in the rest of the world, speaking as if nothing in the eurozone or China could throw UK growth off course.

It’s also unsettling that he put back his target for breaking even by another year, while planning to spend £83.3billion more than he suggested three months ago.

And while he didn’t say so specifically, figures from the Office for Budget Responsibility reveal that over the lifetime of this Parliament there will be a net rise in taxes of an eye-watering £22billion.

Nevertheless, this was a virtuoso Budget. It was more than a masterclass in wrong-footing opponents – more, even, than the continuation of five years’ work to repair the public finances, free at last from obstruction by the Lib Dems.

This first all-Conservative package since 1996 was nothing less than a blueprint for transforming Britain into a better, more prosperous country – of self-reliant families, rescued from welfare dependency to enjoy the dignity and rewards of work.

As ever, the devil will be in the detail, and it may be days before the full impact of the changes becomes apparent.

But the guiding theme of the Chancellor’s measures – making work pay – shines through with perfect clarity.

Indeed, though this was Mr Osborne’s Budget, credit must go to Iain Duncan Smith, who laid the groundwork for the welfare reforms that lie at its heart.

Inevitably, the Left howls against the lower welfare caps and moves to unravel Gordon Brown’s tax credits. Yet these labyrinthine subsidies for low wages were unsustainable from the start.

Introduced in 1999, costs have ballooned from £1.1billion to £30billion a year – 13 per cent of all public spending – while making 4.5million families part-dependent on the State. Meanwhile, the chief beneficiaries have been the country’s worst payers, such as supermarkets.

Something had to be done to save us from ruin. It is much to Mr Osborne’s credit that he’s done it so skilfully.

Softening the blow for families on tax credits, he is raising the starting point for income tax. But his masterstroke is increasing the minimum wage, rebranded a ‘living wage’, to £9 an hour by 2020 – with cuts in corporation tax and small firms’ national insurance to compensate. 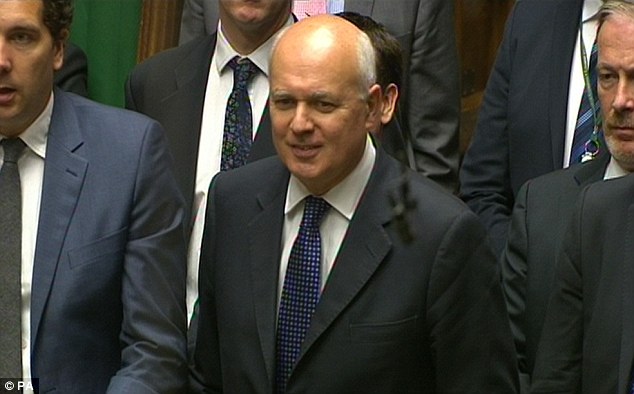 Credit must go to Iain Duncan Smith, who laid the groundwork for the welfare reforms that lie at the heart of the budget

This is in the fine tradition of rabbits out of the Chancellor’s Budget hat, confounding his critics and thoroughly disarming Labour.

Showing similar political (though perhaps not economic) wisdom, he has resisted the Right’s demands to cut the top rate of tax, while going to war against non-doms and the tax-avoiding rich.

But there is relief for middle-income families, with a welcome first move towards raising the threshold for the 40p rate to £50,000 by 2020. And the Right will be justly delighted by his decision to honour our Nato commitment to spend 2 per cent of national income on defence.

Add the boost for apprenticeships, the NHS and the £1million inheritance tax threshold, and this was a Budget for everyone with families’ interests at heart.

Of course, a downside is that the £9 living wage can only encourage yet more migrants to flock to the UK. Meanwhile, phasing out tax credits makes nonsense of David Cameron’s only policy for reducing EU migration. But that is a debate for another day.

Meanwhile, if the worst to be said is that Mr Osborne has made Britain a more attractive place to live and work, he can congratulate himself on a job well done.

He has set out a refreshing, aspirational vision of what Britain might become, freed from the dead hand of the state. For that, we should all be grateful.