Dakota Johnson was the belle of the ball at the premiere of her new movie Bad Times at the El Royale.

The 28-year-old Fifty Shades of Grey beauty donned a delicate pink tiered gown with sparkling embellishments as she hit the red carpet in Los Angeles.

Flawless: Dakota Johnson was ethereal in a sparkly pink gown at the premiere of her movie Bad Times at the El Royale in Los Angeles on Saturday

The daughter of Don Johnson and Melanie Griffith wore her brunette locks loose with the top portion pinned up and accessorized with teardrop earrings.

The Los Angeles premiere saw Hamm and Bridges spruce up in blue suits as they made an appearance on the red carpet.

The plot follows seven strangers who are each hiding dark secrets who meet at Lake Tahoe’s El Royale hotel. 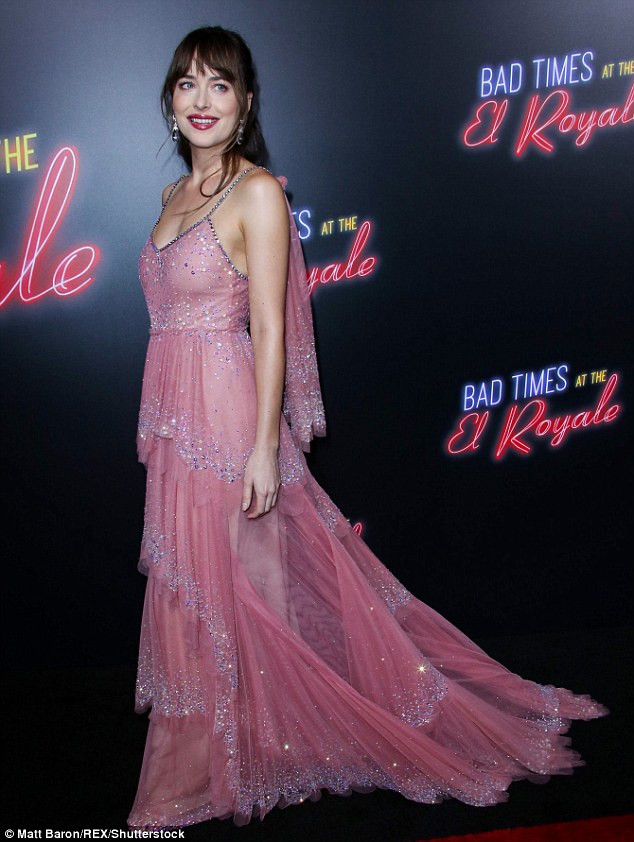 Stealing the spotlight: The 28-year-old actress stunned in a delicate tiered dress with pretty train 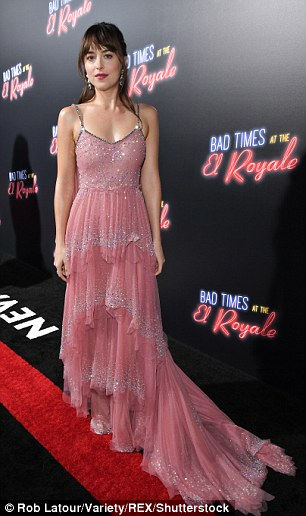 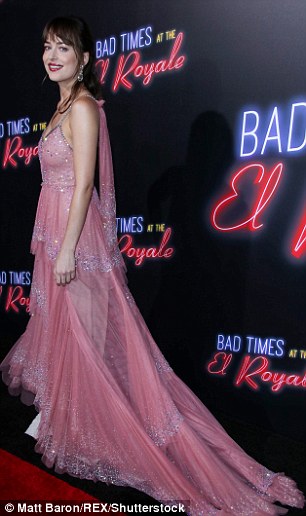 Shining star: Dakota wore her brunette locks half up and sported a pop of red lipstick 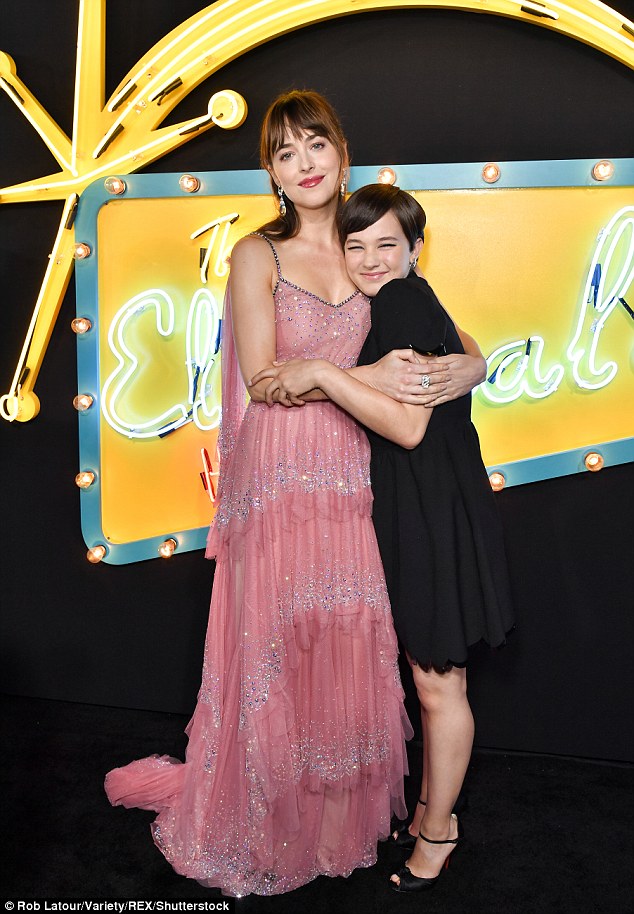 Pals: Dakota shared a hug with co-star Cailee Spaeny, 21, who opted for a little black dress and heels

Over the course of one fateful night, everyone will have a last shot at redemption – before everything goes to hell.

Meanwhile, earlier this month it was revealed that Dakota and boyfriend Chris Martin have reportedly got matching tattoos.

The actress and the Coldplay musician haven’t made their relationship red carpet official yet, but they did the next best thing recently as they were spotted with matching ink, proving their romance – which has been going on for around a year – is going strong.

Whilst at the Suspiria photo call at the Venice Film Festival Dakota was seen to be sporting a delicate infinity sign crossed with two small Xs, which was barely visible on the back of her left forearm, just below her elbow.

Chris, 41, was similarly spotted at the launch of S.E.A Jeans in Los Angeles around the same time, with an identical tattoo on the inside of his right forearm.

The matching tattoos come after it was reported that Something Just Like This hitmaker Chris – who has children Apple, 13, and Moses, 12, with ex-wife Gwyneth Paltrow – was ‘getting more serious’ with the Fifty Shades of Grey actress after getting to know her out of the spotlight.

A source said: ‘For the past two weeks, they have spent a lot of time together. Chris lives in Malibu and Dakota seems to love hanging out there. They occasionally go for dinner with friends, but mostly have friends over at home. They go to the beach together, and walks around the neighborhood. They seem to enjoy sharing a quiet life. It does seem they are getting more serious.’ 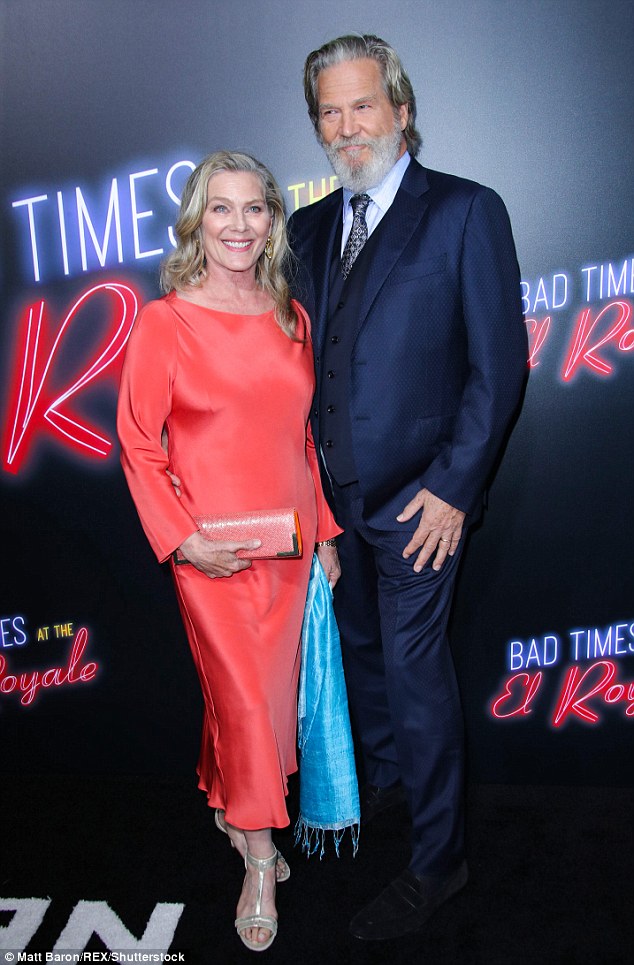 Longtime couple: Jeff Bridges and wife Susan made an appearance at the bash

Meanwhile, Dakota’s father, Don Johnson, has previously given his support to the actress’ romance with the singer, admitting he thought the Viva La Vida hitmaker would be ‘good’ for his daughter.

He said: ‘He’s a lovely guy. I’ve met him and you want your kids happy, no matter what shape it takes.

‘That’s the goal, that’s the key. He’s a very talented and gifted musician. I’ve seen them in a concert at a small venue called the Troubadour in Los Angeles when they were first coming out and that was a memorable moment.

‘I knew right then he’d be good for her. I said “Oh you know, that man has got something going on”.’ 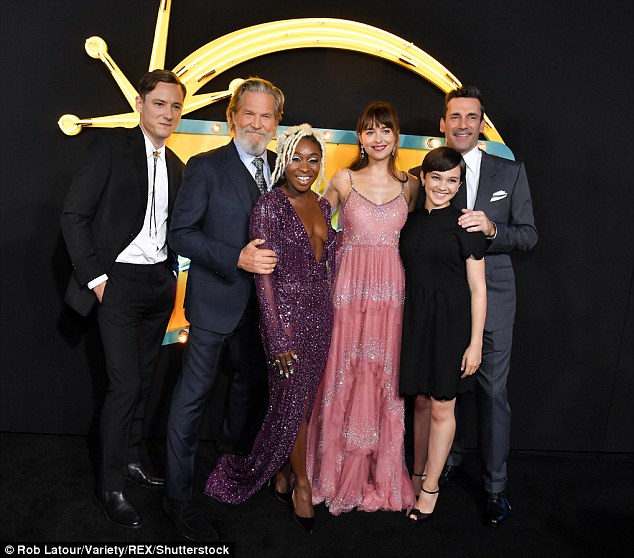 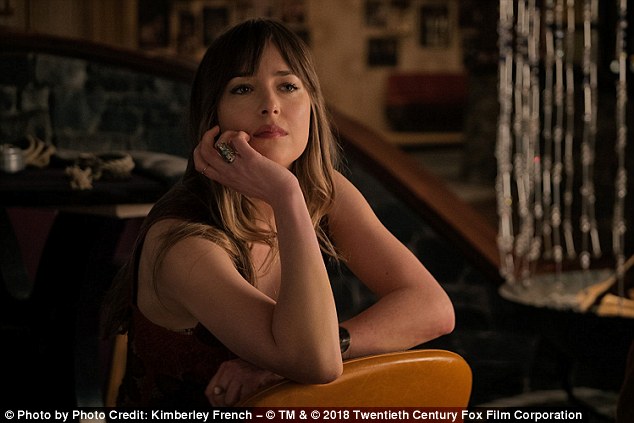 Thriller: Bad Times at the El Royale is directed by Drew Goddard and follows seven strangers who are each hiding dark secrets who meet at Lake Tahoe’s El Royale hotel on one fateful night