Dallas is prepping a convention center to become a makeshift ‘mega-shelter’ for 5,000 evacuees who were forced from their homes because of Hurricane Harvey.

As the violent storm walloped the Texas coast, thousands of people fled the region due to the 130mph winds and the ‘life-threatening’ flooding over the weekend.

FEMA, the Federal Emergency Management Agency, revealed it would take the area years to recover from the storm, which is the worst this decade, it said Sunday.

To help stranded Texans, Dallas is using the Kay Bailey Hutchison Convention Center as a ‘mega-shelter’ to hold 5,000 evacuees by Tuesday morning.

Dallas is prepping a ‘mega-shelter’ that can host up to 5,000 evacuees from Hurricane Harvey, the city said Sunday. The shelter should be open by Tuesday morning. Pictured: Evacuees at a shelter in Austin, Texas on Sunday 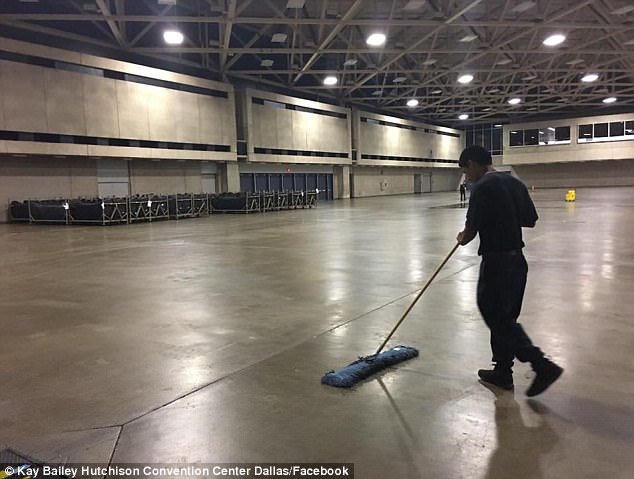 Dallas will host the evacuees at the Kay Bailey Hutchison Convention Center’s (pictured) air-conditioned parking garage. This will be the fourth shelter Dallas has opened up

Rocky Vaz, director of the Office of Emergency Management, said he hopes the center will be up and running for the flush of evacuees heading north.

He said in a statement: ‘We have been talking to the state, and they have cautioned us that things are getting worse and that we should be prepared.’

They will be housed in the convention center’s air-conditioned parking garage, which will not disrupt the planned events taking place at the center.

The Kay Bailey Hutchison Convention Center will be Dallas’ fourth shelter to open.

Tommie Allen has 123 evacuees currently and Samuell Grand has space for 200 people.

Walnut Hill was already at capacity with 290 people as of Sunday night, reported the Dallas Morning News. 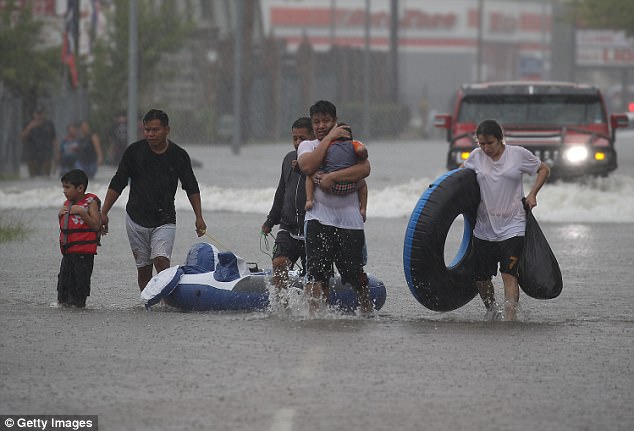 There isn’t an official count of the number of people who evacuated for Hurricane Harvey, but it’s estimated to be tens of thousands. Pictured: A family evacuating their home in Houston

Some spots in Texas and Louisiana are offering free or discounted places for Hurricane Harvey evacuees to stay.

Several parks on the coast and in South Texas have been closed for the hurricane, but the Texas Parks and Wildlife department posted a map of available camping sites away from the path of the hurricane to its website .

There are 12 campgrounds and RV parks with space for Hurricane Harvey evacuees as well and urged people to check www.texascampgrounds.com and www.texascabinrentals.com.

Airbnb said it started connecting evacuees and relief workers with short-term lodging with hosts for free.

The American Red Cross, Salvation Army, Dallas County and other organizations are working together to have the center up and running in time.

Ahead of the storm, residents were told to head north to cities such as San Antonio, which is a federally and state-designated evacuation center.

Texas state parks are open to hurricane evacuees to camp for free and 12 campgrounds and RV parks were made available for Hurricane Harvey evacuees.

Some have even headed east to evacuation centers in Louisiana.

All seven counties on the Texas coast from Corpus Christi to the western end of Galveston Island were under mandatory evacuations from low-lying areas.

Four counties ordered full evacuations and warned there was no guarantee of rescue for those choosing to stay behind.

Houston has been one of the cities hit hardest by the catastrophic flooding but its mayor Sylvester Turner had told residents they didn’t need to evacuate.

As of Sunday, when at least 1,200 people had to be rescued from the floods,  Turner stood by his decision.

The official count of evacuations isn’t known, but it’s estimated to be tens of thousands of people.