Hundreds of crime victims have been exploited for sex by police officers pretending to be ‘knights in shining armour’, damning report reveals

Police officers are exploiting crime victims and witnesses for sex by pretending to be ‘knights in shining armour’, a damning report reveals today.

At least 415 officers and civilian staff have been accused of abusing their power for sexual gratification in the past three years – one every three days.

Worryingly, a police watchdog believes this is just the tip of the iceberg – with many ‘abhorrent’ cases going unreported.

Police officers are exploiting crime victims and witnesses for sex by pretending to be ‘knights in shining armour’, a damning report reveals today (stock image)

HM Inspectorate of Constabulary (HMIC) said that predatory personnel taking advantage of susceptible women by getting them to perform sex acts was ‘one of the biggest corruption threats’ facing forces in England and Wales.

Grooming by officers was ‘an appalling betrayal of vulnerable people’, said the scathing 38-page report.

Despite being warned of the problem of sexual corruption for years, chief constables ‘need to do more’ to root out officers and police staff who abuse positions of responsibility in a bid to shore up public trust, it added.

Officer Jennifer Regan was sacked earlier this year for pursuing an ‘improper’ relationship with a suicidal teenager she talked down from a bridge.

After the intervention, 38-year-old Miss Regan emailed the vulnerable 19-year-old, texted her and persuaded her to stay the night at her flat. The teenager, known only as HL, made the suicide attempt after she was sectioned in January last year.

A misconduct hearing was told that HL was ‘upset’ when she left Miss Regan’s home in Warrington. Although the panel could not be sure the pair had been ‘intimate’, they rejected the officer’s claim that HL left in ‘good spirits’.

The panel said Miss Regan ‘pursued and sought to establish an improper personal, emotional and/or intimate relationship with HL, who was vulnerable to an abuse of trust’.

Miss Regan is appealing against her dismissal by Cheshire Police. 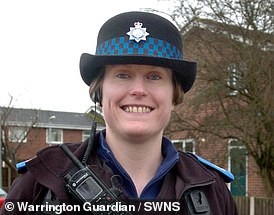 Officer Jennifer Regan (pictured) was sacked earlier this year for pursuing an ‘improper’ relationship with a suicidal teenager she talked down from a bridge.

Domestic and sexual violence victims, witnesses, arrested suspects and drug and alcohol addicts were among those targeted by officers.

HM Inspector Zoe Billingham said: ‘Even one instance of abuse of position for a sexual purpose is one too many. It is an appalling betrayal of often vulnerable people, and can be devastating to those who fall prey to it.

Although the numbers of people involved are small, forces must do all they can to prevent, detect and deal with this serious form of corruption. We have been urging the police to act on this issue for some years now. Many forces have listened and are already making changes.

‘But I’ve been deeply disappointed to find that others have, after all this time, still not put some basic measures in place.’ In the three years to the end of March, HMIC identified 415 reports of officers and police staff being investigated for sexual misconduct. Miss Billingham said: ‘Too often the abuser plays the role of saviour, the knight in shining armour.’

Disturbingly, around 35,000 police employees – or 1 in 6 – did not have up-to-date vetting, which was only standardised in 2006 and needs to be carried out every ten years.

For West Midlands, more than half had not been checked, slightly more than Thames Valley (42 per cent) and the Metropolitan Police (37 per cent). The report said there were ‘no excuses for shortcuts’.

It was vital vetting units were ‘fit for purpose’ as the Government began to recruit an extra 20,000 officers.

Two-thirds of forces had insufficient capacity to become more proactive in actively seeking out those who preyed on crime victims, HMIC warned.

Similarly, two-thirds were unable to monitor technology, including police computers and mobile devices. Many personnel did not understand the boundaries over pursuing relationships with vulnerable people. HMIC suggested forces should profile staff to see if they would potentially exploit victims.

And it expressed ‘surprise’ that there was no requirement to vet officers who transfer between forces. Miss Billingham said: ‘There is anecdotal evidence of some police predators who get wind that they are to be caught out so they run and move from force to force.’ Meanwhile, Chief Constable Stephen Watson, the National Police Chiefs’ Council spokesman for counter corruption, said: ‘In 2017, all police forces signed up to an action plan to root out those who have abused their position for sexual purposes and they regularly monitor their performance against this plan.’

He said that the Inspectorate had noted ‘encouraging progress’, but admitted: ‘We do however recognise that more needs to be done’.