Could anything be better than chilling by the sky-blue waters of Belize, with servants doing your grunt work?

Not for the longfin damselfish, who has turned the planktonic mysid shrimp into a virtual farmhand.

The tiny shrimp have been trained to help the damselfish fertilize the algae farms that make up its diet, according to a new study out of Australia.

This may be the first instance of a non-human species domesticating another species.

Understanding how the damselfish has ‘trained’ the mysids could reveal insights into how humans first domesticated dogs, chickens and other animals.

Researchers in Belize found longfin damselfish have trained tiny mysid shrimp to fertilize their algae farms, in what’s believed to be the first evidence of a non-human species domesticating another species

‘We found highly territorial longfin damselfish and mysids have a mutualistic relationship that benefits both,’ said Rohan Brooker, a marine and behavioral ecologist with Deakin University’s Center for Integrative Ecology.

‘The damselfish aggressively defend a patch of reef where they farm algae for food, against all but the mysid shrimps.’

The shrimp enjoy the damselfish’s protection from other predators and, in return, fertilize the algae with their waste. 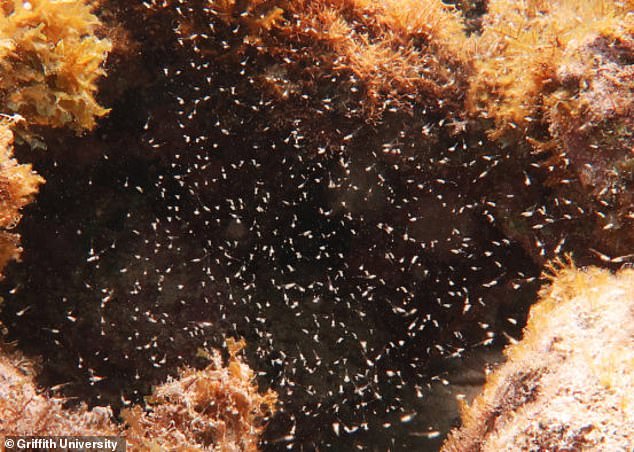 Experts believe that, in return for ‘farming’ for the damselfish, the mysid shrimp receive protection from other predators. Understanding the process could provide insights into how early humans first domesticated dogs, pigs, and other animals. 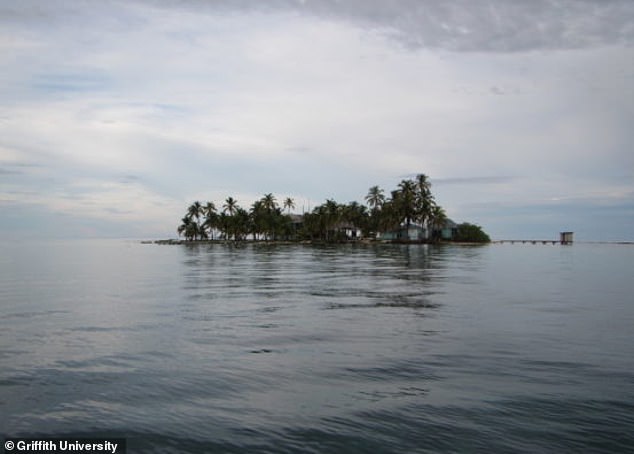 The damselfish’s ‘taming of mysid shrimp was observed at Carrie Bow Caye on Belize’s Meso-American Barrier Reef. The findings are somewhat revolutionary, as domestication is often touted as a distinctly human behavior

The nutrients in their waste improve the quality of the farmed algae, Brooker says, which makes the damselfish healthier.

The findings are somewhat revolutionary, as domestication is often touted as a distinctly human behavior.

Some parasitic fungi are known to control flies and other insects, but more through biochemical means than a formal relationship.

‘The field studies and behavioral experiments we conducted at Carrie Bow Cay Research Station, however, provided evidence the relationship between damselfish and mysids bares all the hallmarks of domestication, not dissimilar to how humans keep farm animals,’ said William Feeney a postdoctoral candidate at Griffith University’s Environmental Futures Research Institute.

The damselfish ‘aggressively defend’ the patch of reef where they farm algae for food, against all but the mysid shrimp

It’s the first recorded case of a non-human vertebrate domesticating another species, Feeney added, ‘and the first experimental evidence for a hypothesized pathway for how this domestication evolved.’

He compared the security the damselfish provide the mysids to the way early cats and dogs were drawn to human settlements.

‘It is generally food scraps or shelter that are thought to have attracted animals to humans,’ Feeney said. 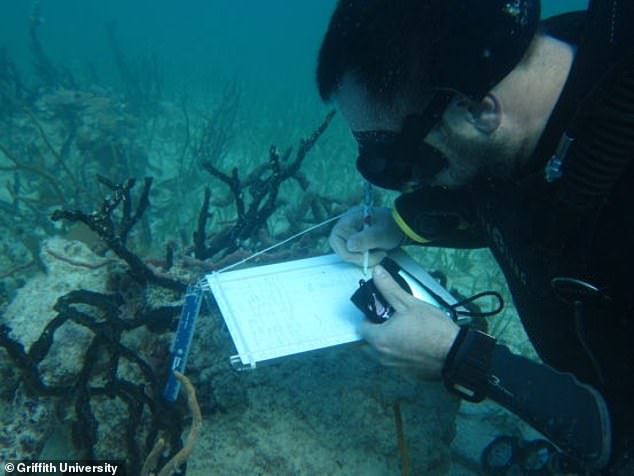 In a true circle of life, the nutrients in the mysid shrimp’s waste improve the quality of the farmed algae,  which makes the damselfish healthier and better able to provide defense for the shrimp.

‘But, this study highlights the important role that protection from predators also plays in domestication.’

Mysids shrimp are quickly consumed by other predators when damselfish aren’t around.

‘It reveals the fascinating insights into domestication by humans that can be gained by examining relationships between non-human organisms.’

Damselfish have exhibited other human-like behavior before: A 2016 study indicated that, if separated from their shoal-mates on Australia’s Great Barrier Reef, blue-green damselfish became stressed out and lost weight.