A former Crown prosecutor has called for a fresh investigation into the collision between a car occupied by the Victorian Premier Dan Andrews and the bicycle ridden by 15-year-old Ryan Meuleman that left the teenager fighting for his life.

He also believes the investigation by Victoria Police was such a ‘scandal’ the case must be investigated by another force.

The accident, which occurred on Victoria’s Mornington Peninsula on January 7 of 2013, has resurfaced to dog Mr Andrews on the campaign trail as he seeks a third term for his Labor government at the November 26 election.

Mr Meuleman, who is now 24, launched a grenade into Mr Andrews’ election chances when he told the Herald Sun his memory of the accident differed sharply from the accounts of the Premier and his wife, who was driving the car.

Mr Meuleman also said a lawyer from Labor-linked law firm Slater & Gordon told him he needed to ‘keep quiet’ about the accident or he would not receive $80,000 in compensation from the Transport Accident Commission when he turned 18.

Under pressure from lawyers for the Mueleman family, police on Sunday released previously unseen photos taken at the scene of the accident which Mr Bowen says ‘contradict the account of the collision’ by Mr Andrews.

Mr Andrews had refused to comment, saying all queries about the accident should be directed to police.

Both the Premier and Victoria Police have refused to answer further questions put to them by Daily Mail Australia about the case. 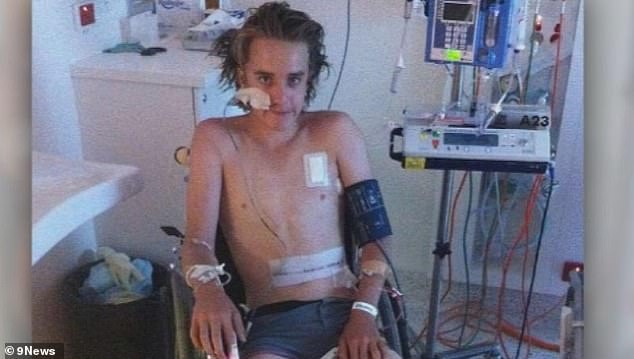 Mr Meuleman told the Herald Sun he remembered cycling slowly across Ridley Street, near the town of Blairgowie, about 1pm when a car came ‘speeding’ around the corner ‘out of nowhere’ and struck him.

The accident left Mr Meuleman in agony with a punctured lung, broken ribs, and internal bleeding.

He was airlifted to a hospital in Melbourne and doctors had to pump litres of blood and marrow into him because of a ruptured spleen.

Surgeons were eventually forced to remove 90 per cent of the injured organ. 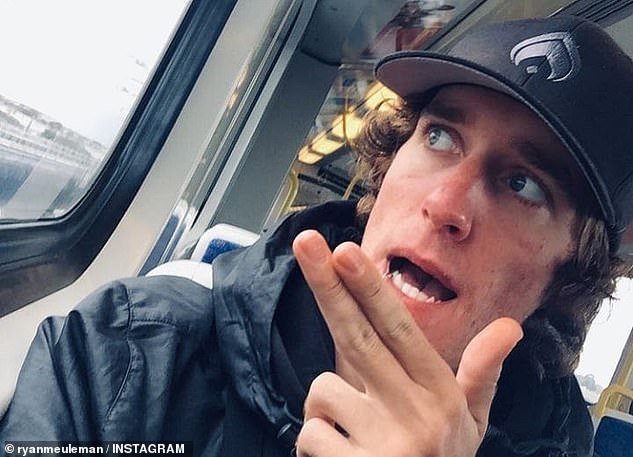 Mr Meuleman, who is now 24, has come forward almost 10 years later to dispute the Premier’s account of what happened

Mr Andrews insists Mr Meuleman T-boned the Ford Territory, which was provided to Mr Andrews because of his role as Opposition leader at the time.

‘The cyclist was travelling at speed and hit our car at a perfect right angle very heavily,’ Mr Andrews told police in his official statement.

‘I want to make it clear – the cyclist hit our vehicle.’

The first witness to the scene was Jane Crittenden, who said she almost drove into the back of the Andrews car.

It is not known whether police took a witness statement from Ms Crittenden. 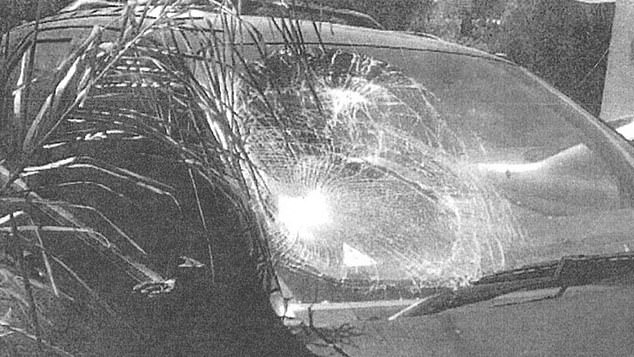 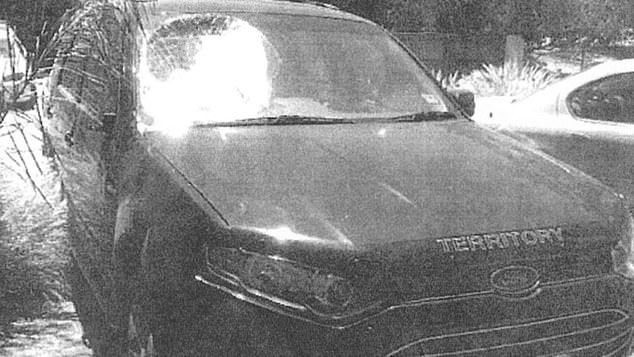 He said normal procedure would have been for the road to have been closed off and for police experts from the Accident Investigation Unit to investigate, none of which happened.

The two officers attending the crash also failed to breath test Catherine Andrews, who testified she was driving, with Mr Andrews in the passenger seat and the couple’s three young children in the back. 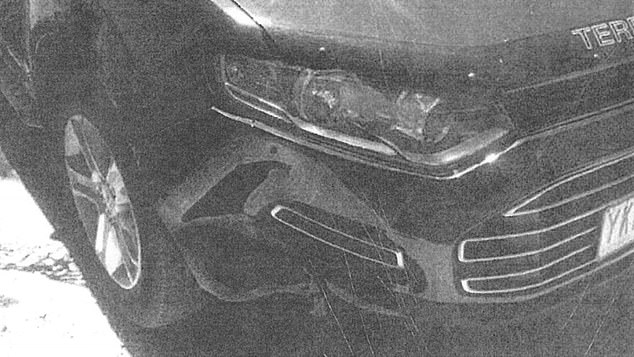 The police pictures also show damage to the front corner bodywork ahead of the front tyre which the Meulemans insist supports their claim the care Ms Andrews drove into Ryan, now 24

The failure to breath test led to an investigation of the case by Victoria’s anti-corruption watchdog in 2017 after police continually refused FOI requests by the media and the Meuleman family to release the full case files.

‘It was a busy scene, and in that busyness one thought the other had done [the breath test],’ Mr Ashton said.

‘There wasn’t any suggestion they had deliberately done anything improper.’

Mr Andrews said one of the officers even apologised for not doing the breath test.

‘She (the officer) said, “I’m really sorry that we didn’t breath-test you. We should have”,’ he said. 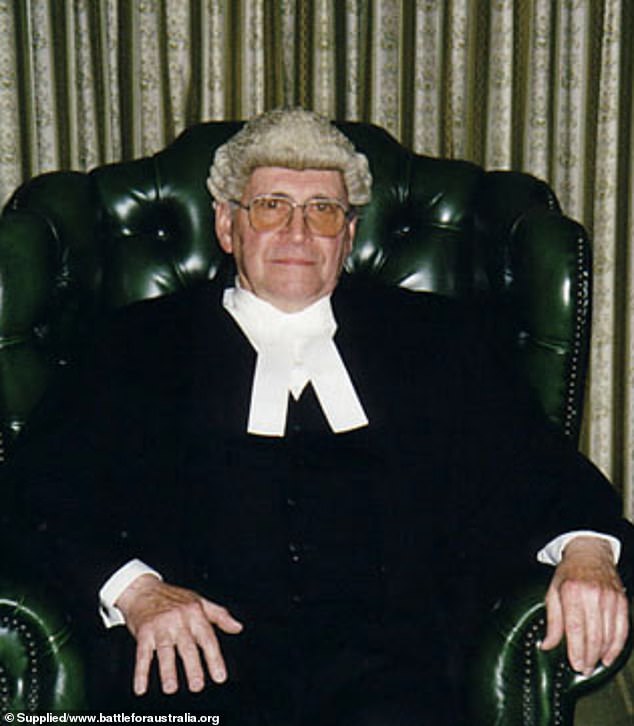 ANDREWS LEAVES THE SCENE WITH WIFE AND CHILDREN

As Mr Meuleman was still lying on the ground screaming, Mr Andrews was allowed to drive his car, with its heavily cracked windscreen, to the family’s nearby holiday house to drop off his traumatised children and wife.

Mr Bowen said that should never have happened.

‘The recently disclosed police photographs now show that driving the Ford Territory away from the collision scene with badly shattered windscreen may have been an offence against Victorian traffic law,’ he said.

Mr Bowen said normal procedure was to impound a vehicle involved in a major crash and have it examined by police collision experts, which was not done.

‘This serious failure makes reconstructing the circumstances of the collision far more difficult,’ he said. 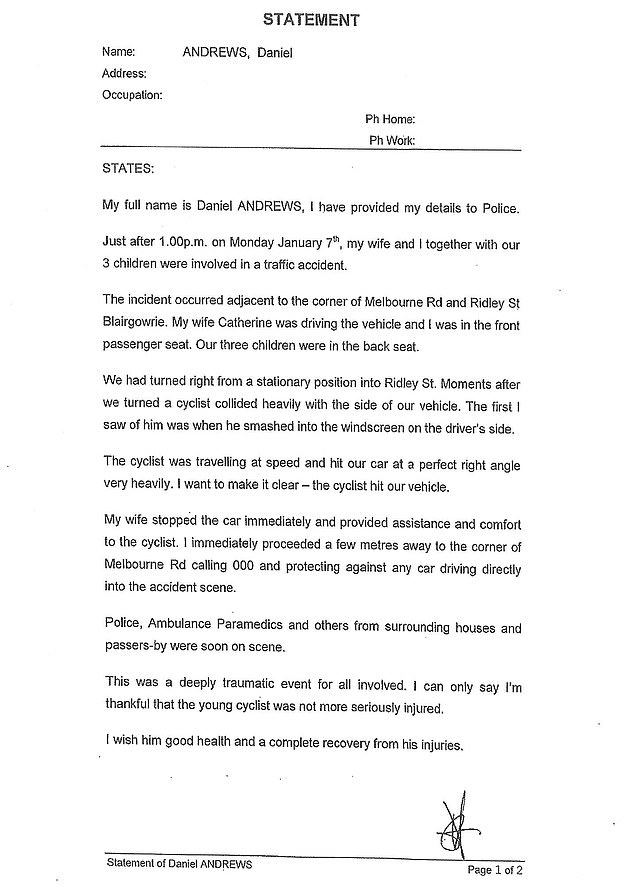 WHAT HAPPENED AFTER THE CRASH

Police did not publicly report the accident and Mr Meuleman’s father Peter was not told who had been involved.

Peter Meuleman only learned who was in the Ford Territory when an insurance claim was lodged under the name of Catherine Kesik, which was Ms Andrews’ maiden name.

The crash was only made public nine days after it happened when Peter Meuleman approached the Herald Sun to say Mr Andrews and his wife had not contacted him.

When asked in 2017 why he had not been in contact with the family, Mr Andrews cited legal reasons.

‘I maintain and Victoria Police are supportive of the decision I made (not to contact the family any more), that was the appropriate thing to do,’ Mr Andrews said.

‘The last thing I was ever going to do was to attempt to speak to a witness, a minor, before the police had done so.’

Ryan Meuleman claims no statement was ever taken from him and this has been supported by the documents so far released by police. 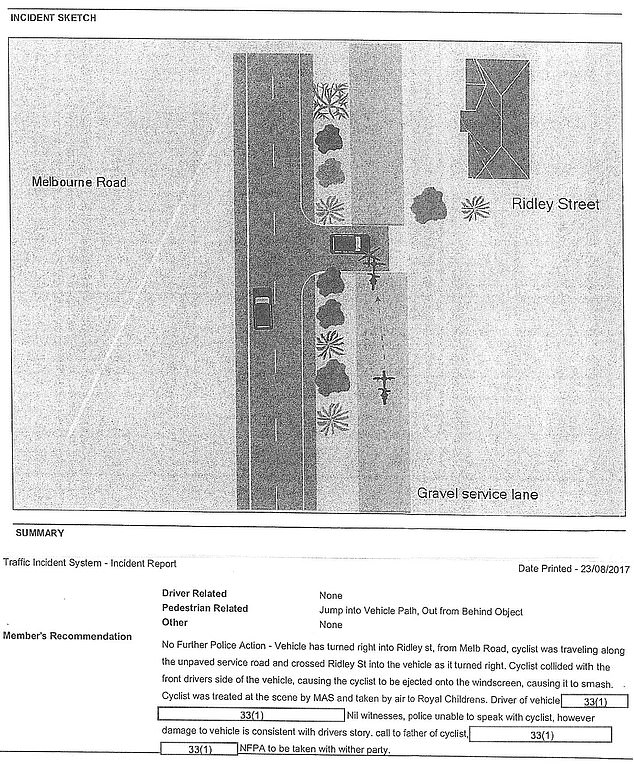 The police report ruled out any charges against the driver or the cyclist and found it was the result of ‘Jump into Vehicle Path, Out from Behind Object’

Ryan Meuleman claimed he was told by a lawyer from Slater & Gordon that to get compensation for the accident he had to keep quiet and not contest the compensation payment.

‘I basically had to keep my mouth shut,’ Ryan told the Herald Sun about the ‘deal’ offered to him.

‘It sort of scared me into signing straight away and just agreeing with it.’

The Meuleman family has continued to request all documents related to the case but have been repeatedly met by police refusals. 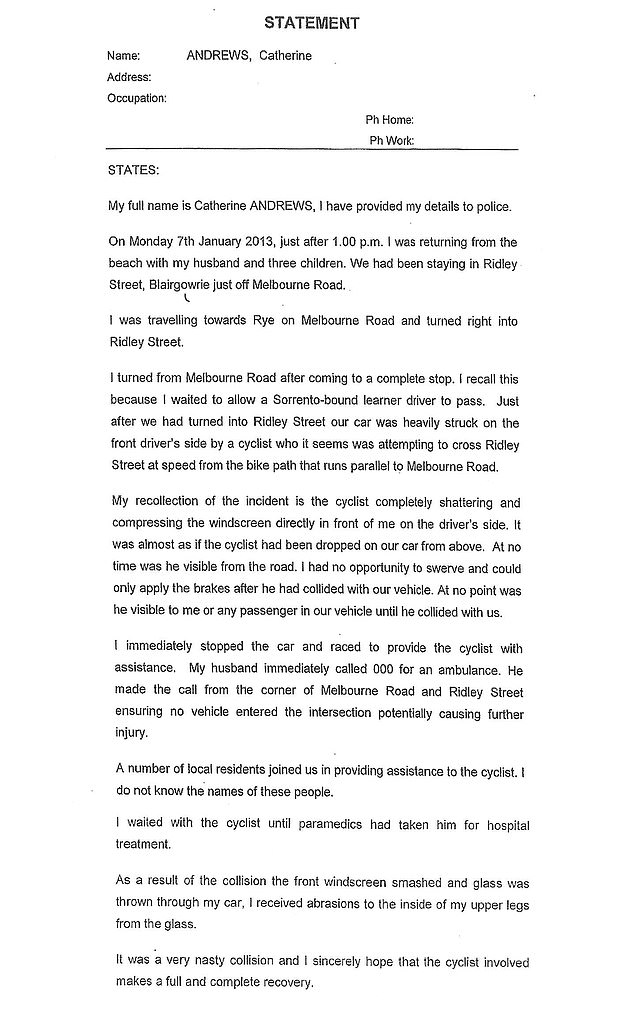 Mr Andrews has refused to say anything more about the accident since the story resurfaced on November 4th, continually stating he covered the matter at the time and after the IBAC investigation.

However, he did describe the crash in detail during a press conference in 2017.

‘The roadway was clear. We turned to accelerate to then move down the road. He crashed with such, such force into the side of the car.

‘He came from the right, right on our eyeline if you like, hit around that mirror on the side and the wheel and then was put up into the windscreen and over the top of the car.’

The photos released by police show a vehicle with a heavily dented front right bumper bar and smashed driver’s side window. 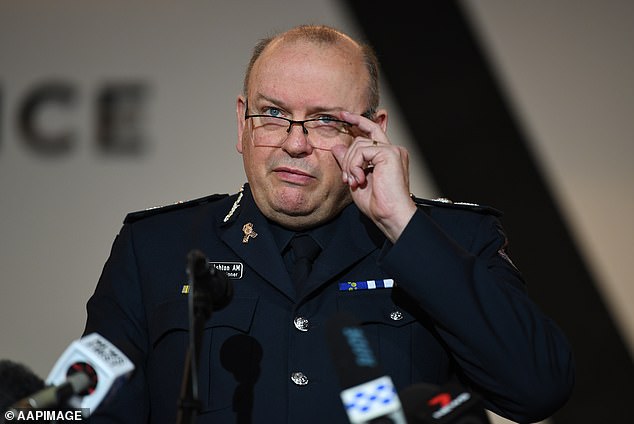 Mr Bowen, who retired as a crown prosecutor in 1993, said the photos were of ‘appalling quality’ but ‘contradict’ the account of the collision by Mr Andrews and his wife.

The smashed windscreen of Mr Andrews’ car ‘clearly suggested a head-on collision with the bicycle rider’, Mr Bowen said, rather than a side-on T-bone as claimed.

‘MAY DEFY LAWS OF PHYSICS’

‘If the collision occurred as Daniel Andrews claims by the cyclist striking the Andrews vehicle on the driver’s side “at a perfect right angle” then the laws of dynamics may come into play.

‘The police photograph… would indicate that the body of Ryan Meuleman would very likely have been thrown across the bonnet before landing on the road on the other side of the Andrews vehicle.

‘This did not happen as it should have if the Daniel Andrews’ statement to police is correct.

‘The body of Ryan Meuleman clearly struck the windscreen and shattered it.

‘If the Daniel Andrews version of the collision can be believed, Ryan’s body in flight would have to change direction sharply to the left and strike the windscreen.

‘This may defy both common sense and the laws of dynamics.’

A report on the accident by a traffic engineer hired by the Meuleman family asserts it is ‘highly unlikely that the cyclist was travelling at high speed’ as the statements form Mr Andrews and his wife indicate. 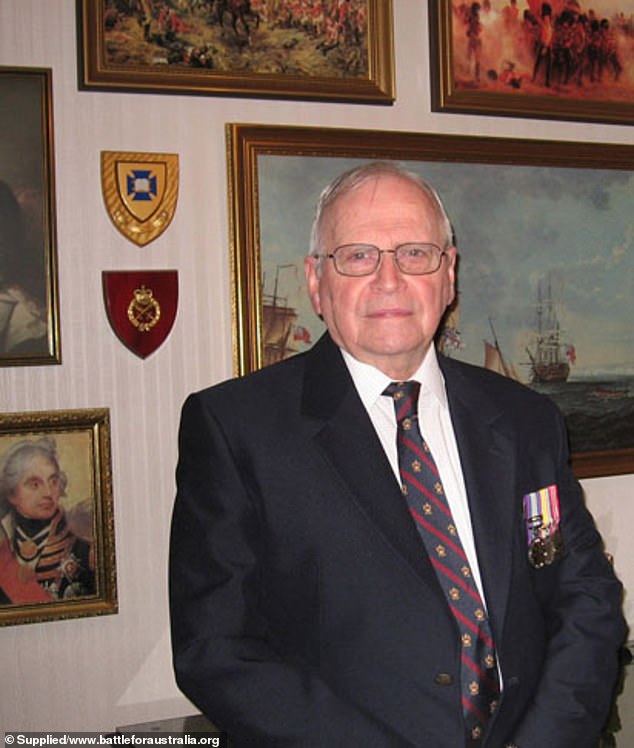 Daily Mail Australia asked police nine questions about the case, including why no statement was taken from Ryan Meuleman, why Mr Andrews was allowed to leave the scene with his family and his wife and why the Ford Territory was not impounded.  The premier’s office was also asked why Catherine Andrews was not breath tested.

Police sent the following response: ‘For privacy reasons we do not discuss individuals.’

When asked about the photos of the smashed Ford Territory on Tuesday, Mr Andrews directed reporters to Victoria Police.

When this was put to Victoria Police they issued a two-line statement.

‘Victoria Police conducted a thorough investigation into the incident,’ the statement said.

‘As the investigation has been finalised, Victoria Police has no further comment to make.’

Questions were also sent to Mr Andrews media team and they issued the following statement.

‘All of these questions have been addressed at numerous press conferences,’ the spokesperson said.

‘We have nothing further to add.’ 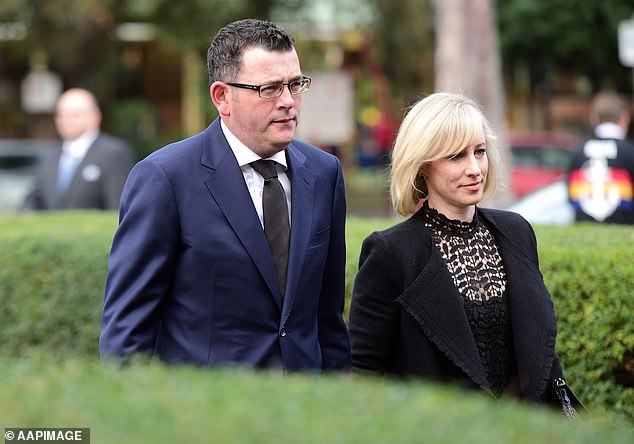 The crash story has thrown a spanner into the re-election campaign of Dan Andrews, seen here with wife Cath in the Melbourne seaside suburb of Williamstown

Mr Bowen said there were ‘so many appalling failures of normal police investigation’.

He called the investigation a serious scandal for ‘which the Victoria Police should be held accountable’.

The case ‘deserves further investigation but not by Victoria Police who have already failed the victim,’ Mr Bowen said.

He called for investigators from another state to reopen the case.