David Koch explodes at Daniel Andrews for ‘acting like there’s nothing wrong’ with the health system and for presiding over the world’s longest lockdown: ‘That is NOT reality’

Dan Andrews has been savaged by Sunrise host David Koch over the death of a young dad after his desperate wife gave up on an ambulance coming and instead rushed him to hospital herself.

The Victorian Premier did a flurry of breakfast media interviews on Monday morning to push his election campaign promises, including free tampons and pads in 700 locations and a $250 power bill bonus for some Victorians.

But as early voting started for the state election on November 26, the Premier was instead grilled over the tragic death of Danny Vasiljevic and Victoria’s devastating Covid lockdowns.

Mr Vasiljevic, 36, died after he suffered chest pains while at a Melbourne shopping centre in September and waited in vain for an ambulance to arrive. 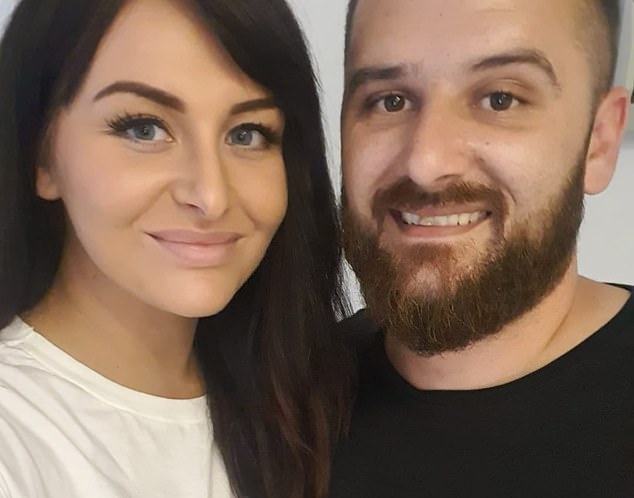 Danny Vasiljevic, 36, (right) died after he suffered chest pains while at a Melbourne shopping centre in September and waited in vain for an ambulance to arrive before his partner Katrina Christou (left) drove him to hospital herself

His partner Katrina Christou rushed to his side within 11 minutes and drove him to hospital herself where he later died. The ambulance service said they arrived after 22 minutes.

‘What are you going to do about the hospital system?,’ demanded Koch. ‘The health system’s a mess.

‘You have people like Danny who called 000 and it took 20 minutes to get an ambulance. His wife had to take him to hospital with his kids in the back and he died.

‘You are talking like there is nothing wrong with the health system. You have done your 20,000 extra jobs and another 26,000 to come, the nurses love you and everything is rosy. It’s not! That is not reality.’

The Premier dodged the issue of the young dad’s death and instead paid tribute to the work healthcare employees did during the pandemic and pledged to recruit more nurses. 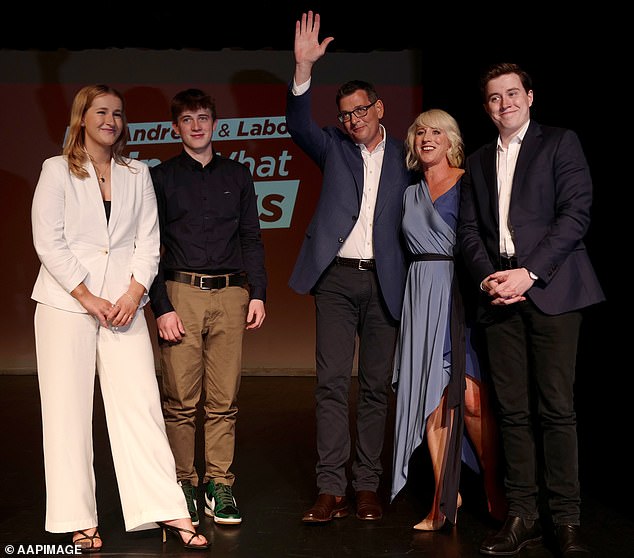 He added: ‘I don’t know that I said that at all. Covid has caused really significant challenges in our health system.

‘There is no doubting there has been tough times in our health system and our staff are done an amazing job.

‘Our nurses, our ambos, our doctors, the whole team and our hospitals have done an amazing job over this last year.’

Koch snapped back: ‘But they say you have let them down.’

The premier insisted his government had helped medics by investing in hospitals and staff.

‘Covid has really not helped our health system, but we have a plan to keep investing and keep supporting our staff so that they can take care of and support our patients,’ he added.

Koch also tackled the premier over the state-ordered lockdowns that brought Victoria to a standstill for months on end during the pandemic.

‘Your second term was dominated by the world’s longest lockdown,’ said Koch. ‘When you look back, do you regret how you handled it?’

The premier said he made ‘tough decisions, not popular decisions’ to protect Victorians during Covid – and said he was ‘proud’ of the sacrifices they made. 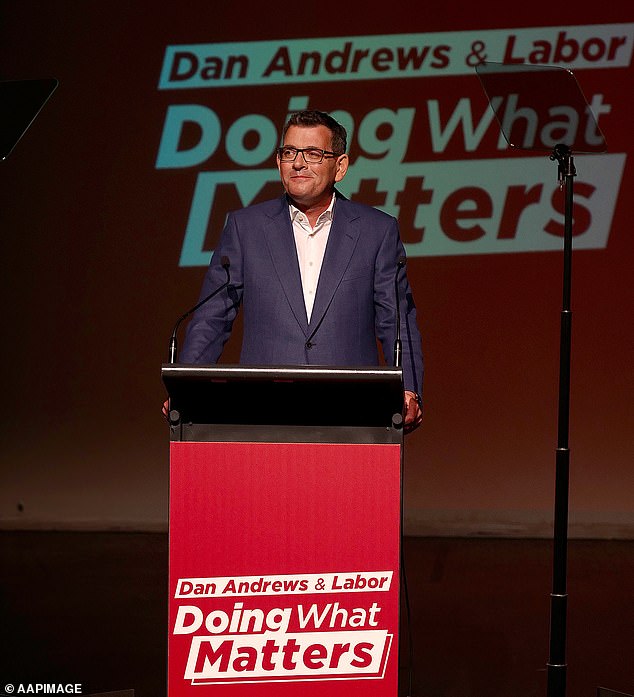 Premier Dan Andrews (pictued at Sunday’s election campaign launch) said he made ‘tough decisions, not popular decisions’ to protect Victorians during Covid – and said he was ‘proud’ of the sacrifices they made

‘We made some very difficult decisions and Victorians did some very quite amazing things,’ he said.

‘To get vaccinated in such high numbers, to look out for each other those acts of kindness, that sense of compassion and absolute connection between friends and family and indeed strangers.

‘Victorians went through a very difficult time but we made tough decisions not the popular decisions, but the right decisions to keep people safe.

‘Victorians can be so proud and I’m so proud of them for all they built all that they sacrificed.’