DAN HODGES: Boris Johnson should be most scared about Rebecca Long Bailey’s sacking

It’s The Untouchables strategy. ‘When he asked Rebecca Long Bailey to stand down, Keir wasn’t thinking about the Jenrick scandal,’ an ally of the Labour leader reveals. ‘But in hindsight the comparison is stark. It’s like that old Blair line: Keir is leading his party, Boris is following his. He couldn’t sack Cummings, and he can’t sack Jenrick.’

Former Director of Public Prosecutions Starmer is going to be framed by his team as Labour’s Eliot Ness – the incorruptible, hard-charging American prohibition agent who brought down gangster Al Capone – immortalised by Kevin Costner in the movie The Untouchables.

While the PM clings to Ministers accused of dodgy dealings, Starmer wants to be seen to act ruthlessly against any wrongdoing within his party.

‘It was inconceivable to him that you could endorse what was in that article – like Long Bailey did – and stay in the Shadow Cabinet,’ a Labour source explains.

It’s less than three months since Starmer dug himself out from the rubble of Labour’s Red Wall to take charge of Jeremy Corbyn’s broken party.

The coronavirus crisis has made it hard for him to assert himself. But last week he stunned Westminster – and those activists and MPs who were hoping he would simply put a stylish quiff on Corbyn’s neo-Marxist agenda – and unceremoniously dumped the most senior Left-winger on the front-bench.

Some immediately described it as his ‘Clause 4 Moment’, a reference to the abolition of Labour’s long-standing commitment to nationalisation that was seen to cement the New Labour internal revolution.

But Tony Blair’s move was carefully choreographed. Starmer’s sacking of Long Bailey for retweeting a false anti-Israeli conspiracy theory was dramatic, bold and generated genuine anger from the dusty effigies of the Corbynite waxwork museum.

‘I stand in solidarity with her,’ announced former Shadow Chancellor John McDonnell. ‘Her sacking is a reckless over-reaction from someone who promised to end factionalism,’ whined Jon Lansman, founder of the Corbynite entryist group Momentum. Both immediately called for her reinstatement.

And Starmer pointedly ignored them. Until last week, he had been earning plaudits for his steady, forensic questioning of Boris at the Dispatch Box. But some were debaing whether he had that necessary killer political instinct.

Long Bailey discovered that he has. Indeed, on one level she can feel hard done by. She had never actually read the offending interview with actress Maxine Peake.

Peake was a constituent and friend, and she felt she couldn’t disown her, even though she disagreed with the offending comments. And she was devastated to find herself becoming a martyr to the Left’s rabidly antisemitic legions.

But that cut no ice with Labour’s Untouchable. He had already decided to draw a line under the racism blighting his party. And Long Bailey presented him with an opportunity he ruthlessly accepted. However repentant, having done the crime she has to do the time on the backbenches.

Some believe this ruthlessness was also aligned with opportunism. Starmer is aware the Equalities and Human Rights Commission is preparing to publish its report into Labour antisemitism and is already making strenuous efforts to get ahead of it. At a recent meeting with representatives of the Jewish community, Starmer gave a blanket commitment to implement any EHRC recommendations in full. 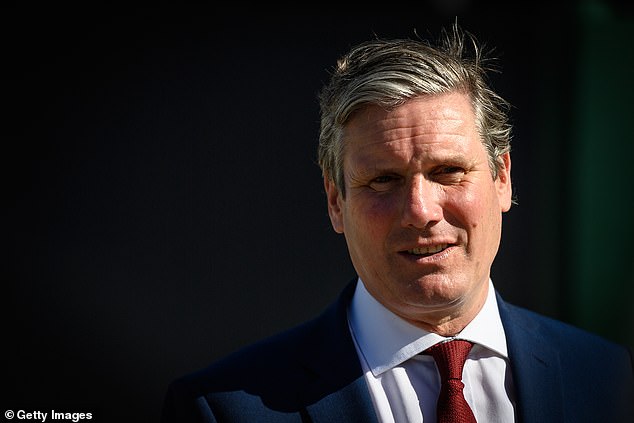 He also pledged to act against any Labour MPs who share a platform with those expelled from the party for antisemitism.

As one Jewish community leader told me: ‘Long Bailey’s sacking sent a positive signal. But the key is going to be how he deals with the EHRC report.’

But for Labour MPs entering their second decade of opposition, ruthlessness and opportunism are to be welcomed.

‘Keir is already seen as almost as prime ministerial as Johnson. That’s incredible after just a few months,’ one Shadow Minister enthused. How is he doing compared to his friend and close ally Ed Miliband at this stage of his leadership, I asked. ‘Oh, he’s a totally different class to Ed,’ came the reply.

He may well be. But such a positive comparison also inadvertently highlights one of Starmer’s problems. He has shown himself to be a more nimble parliamentary performer than Corbyn and to be more effective at defining the early stage of his leadership than Miliband.

But not being Jeremy Corbyn and not being Ed Miliband isn’t saying all that much.

And by setting the bar so low, the Starmtroopers – his cheerleaders who are already making their presence felt across social media – are preventing a more objective analysis of his performance.

After being on the back foot in the first few weeks, Boris has started to hold his own in their weekly exchanges. Starmer was badly outmanoeuvred over Labour’s confused stance about children returning to school. And he has yet to unveil a single significant new policy initiative.

But his team are aware of the scale of the challenge that faces them. And they have a strategy to confront it. They believe Boris and Dom Cummings are too locked into re-running the game-plan that won them the 2019 General Election. In particular, more brinkmanship over a No Deal Brexit, and the creation of an artificial culture war.

‘Sacking Long Bailey was the right thing to do and we have to draw a line under antisemitism,’ a Starmer ally explains. ‘But our focus from now on is going to be exclusively on what matters to real people in their lives. So, over the next month, you’re going to see a massive focus on jobs. We’re not going to be distracted by anything that the public doesn’t care about.’

By putting jobs and the economy at the forefront of his battleplan, Starmer is entering territory not occupied since the New Labour years. And he’s gambling that the Government’s latest attempts to coax the nation out of lockdown will prove too little, too late.

A senior Tory told me: ‘Starmer is a game-changer.’ Sacking a distinctly average Corbynite Shadow Minister has not achieved that. But Boris has been put on notice. Labour’s Eliot Ness is on his tail.

As Boris prepares for a major relaunch of his premiership next week, I understand moves are under way to give No 10 even tighter control over the creaking Whitehall machine.

According to a senior Minister, the failure to fully reopen schools in advance of the summer holidays and the Marcus Rashford schools dinner row have seen Downing Street lose confidence with Gavin Williamson and his Department for Education civil servants. As a result, they’re now taking direct control over departmental spending.

‘All major spending now has to be signed off by Dom Cummings and the No 10 team,’ the Minister explains. ‘They’ve basically taken over control.’

The move follows reports last week that the PM’s controversial adviser is planning to also reach out to impose his grip on the Cabinet Office, telling colleagues a ‘hard rain is coming’ for the department’s civil servants. Two weeks ago his plan to merge the Foreign Office and DFID was announced and he is now nicknamed ‘the Deputy Chancellor’ for the way he is said to exert his influence over Rishi Sunak and his number-crunching mandarins.

But Cummings’s latest power grab is not being welcomed by everyone in the Cabinet. ‘He’s come back after the whole Barnard Castle affair acting like nothing’s changed,’ one Cabinet Minister said. ‘But it has. He’s used up all his political capital. He’s going to overreach once too often, and when he does we’re going to finish him.’

Dom is going to need to keep his eyesight especially sharp over the weeks and months ahead.

I’m told there was major pushback in Cabinet over Matt Hancock’s insistence that those returning to pubs on July 4 would have to leave their contact details as part of the test-and- tracing regime. Ostensibly, the debate was driven by civil liberties, but one Minister tells me: ‘Colleagues keep saying, “Are you nuts? When I get out of lockdown the last thing I’m doing is letting anyone keep a record of how many boozers I’ve been in. What if the local paper gets hold of it? Or my wife?” ’