DAN HODGES: We can’t go on like this much longer

It was when I bought a gun that I knew Corona Madness had finally claimed me. I’d been speaking to a Government official who presented an increasingly apocalyptic vision of how the Covid-19 crisis could spiral out of control.

Panic-buying was just the start, they feared. Soon there would be looting, the police would be overwhelmed and the Army would have to be drafted in.

So I ordered a pistol on the internet. Not a real one, obviously. A replica. But I figured the average looter wouldn’t notice the difference.

Then I decided to try to turn back time.

A soldier is pictured being trained by a paramedic. This morning, Whitehall is locked in a fierce debate over how to plot a way out

I’d seen the reports of increasing numbers of Covid-19 patients in their 50s being admitted to hospital, and started to contemplate the brutal triage system that would be introduced by a desperate NHS.

So at night, as I went to sleep, I began to try to teach myself a new birth date – one that would place me in my 40s and give me a fighting chance of ICU admission when the virus struck.

But the thing that tipped me closest to the edge was a packet of toilet paper.

A neighbour rang to ask if I knew of any local shops that might still have some in stock. As I spoke to her, I could literally see six new rolls glinting in their shiny packet.

Basic decency said I should offer to give her some. But I was transfixed, like Gollum eying his precious ring.

What if the panic-buying intensified? Why hadn’t she had the foresight to purchase her own rolls? This was my sacred toilet paper. 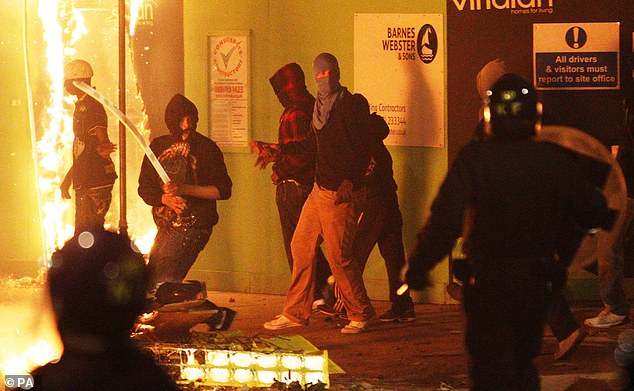 Panic-buying was just the start, they feared. Soon there would be looting, the police would be overwhelmed and the Army would have to be drafted in. The 2011 London Riots are pictured above

That was me at the start of this crisis. The Blackheath Rambo – a fake fortysomething with a pistol, ready and willing to take down anyone who dared make a move against his prized hoard of Andrex.

Of course, the madness subsided. It proved impossible to maintain such a sense of jeopardy over a month of lockdown.

The gun never actually arrived – too many people had the same idea as me, and they sold out. The NHS ICU crisis didn’t materialise.

In the end I relented, and offered to help my neighbour.

But my own brief skirmish with coronavirus’s mental demons revealed a simple truth. We can’t carry on living like this.

This morning, Whitehall is locked in a fierce debate over how to plot a way out.

On one side are scientists and epidemiologists, warning of the awful death toll that could result from a premature lifting of restrictions. 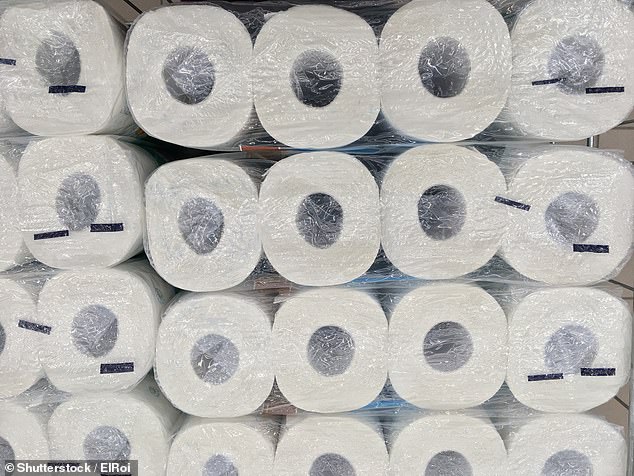 What if the panic-buying intensified? Why hadn’t she had the foresight to purchase her own rolls? This was my sacred toilet paper. That was me at the start of this crisis [File photo]

On the other are economists and accountants, pointing to the catastrophic impact on the economy if those restrictions persist.

But there is a vital voice missing from the discussions. The voice that sets aside the clinical and economic imperatives for a moment, and calmly points out a basic fact. We are surviving. And existing. But we are no longer living.

Each of us is incarcerated like a prisoner. Allowed out for one hour of exercise a day, before being reinterred for the other 23.

When we do go out, we are not people, but glorified computer guidance systems, constantly calculating the speed and trajectory of nearby pedestrians, cyclists or joggers who could deploy the lethal germ and seal our fate.

We are lucky. The elderly and infirm are granted no release from their cell at all.

Families have been ripped asunder. Grandparents banned by Government edict from hugging their grandchildren. To encroach within 6ft of a lifelong friend is to risk a fine or arrest.

That is on an individual level. But what we are witnessing goes far wider. To the slow leeching of the life-blood of a nation.

Our great works of art have been rendered invisible. Shakespeare has been banished from the stage by executive order. Our sporting arenas lie silent. Within our cathedrals, churches and mosques the simple act of prayer has been rendered a sin.

Yes, these measures have all been justified. And, despite the naysayers, have proved effective.

Britain did its duty and observed the Easter lockdown. And as predicted by the Government’s health experts, the spread of the virus may have finally peaked.

But we need a serious discussion now – as a country – about where we go from here.

And it cannot be a discussion confined to graphs, or spreadsheets, or infection rate algebra.

The argument up to now – correctly – has been that the priority must be saving lives.

And many have been. But at what price? Not in economics, but to a nation’s soul.

But the biggest single scandal of this crisis occurred on March 30, when 13-year-old Ismail Mohamed Abdulwahab, from London, succumbed to Covid-19.

Because of restrictions we all demanded be put in place to keep us safe, he died alone. And because of those same restrictions, he was buried alone.

Yes, we should be proud of our collective national effort over the past month. But when we allow our children to die in that way, we have set aside our humanity and taken a step towards barbarity.

So now we need to be honest with ourselves. We need to make a choice. In terms of who we are, who we want to be and just how high a price we want to pay to keep ourselves safe from coronavirus. 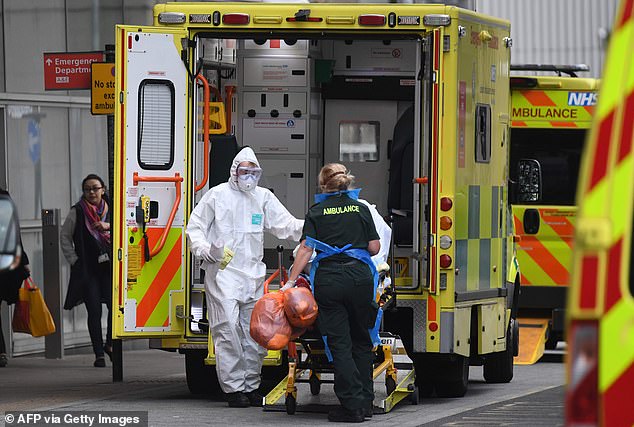 The NHS ICU crisis didn’t materialise. In the end I relented, and offered to help my neighbour. Ambulance staff in North London are pictured above wearing personal protective equipment

And it’s a choice that will have to be made quickly.

Speaking to Ministers last week, it is clear that there will be no Hollywood-style ending to our Covid-19 crisis.

As one explained: ‘People need to realise this thing is just not going to go away. Smallpox is basically the only virus that’s ever been eradicated. Every season we get four separate strains of flu circulating in the UK. And coronavirus is set to become one of them. Theoretically for decades.’

I’m also told the production and distribution of a vaccine is, realistically, years away. As is a foolproof testing and tracing regime.

So over the next three weeks of lockdown, we are going to have to take a long look around, and then take an even harder look at ourselves.

Ministers are today facing demands they set out their ‘exit plan’. But we cannot subcontract our own humanity to them.

We have to decide ourselves what risks we’re prepared to take in order to go back to the lives we had before the coronavirus laid its hand upon us.

If there are new dangers that come with that, so be it. But however well-meaning Boris Johnson and his Ministers and their experts are, we cannot continue to live – and die – like this.