DAN WOOTTON: Meghan is kicking off her delusional bid to end up in the White House early

I’ve never forgotten a conversation I had with one of Meghan’s increasingly frustrated close aides in early 2019 as her relationships within the Royal Family turned ever more toxic.

‘I am now convinced there is something bigger going on here – an eventual plan that involves running for office in America,’ the courtier confided in a moment of frustration about claims of their principal’s increasingly uncontrollable behaviour.

They added: ‘She’s obsessed with US politics. I think we’re (the Royal Family) now just a stepping stone to something she considers far more important and attractive.’

As I spoke to many more people close to the Duchess of Woke, both in the UK and US, over the next three years, I too have no doubt she views herself a major political figure of the future.

After all, what’s bigger than being a princess in the British Royal Family? Becoming the first female President of the United States, of course!

I concede such delusions of grandeur are very unlikely to result in the most self-obsessed woman in Hollywood (and that’s saying something) becoming leader of the free world, but that doesn’t mean Meghan isn’t going to do everything to try and make it there.

Meghan Markle and Gloria Steinem spoke to Vogue about the repeal of Roe v. Wade

The Duchess of Sussex and Gloria Steinem are seen in 2020, speaking in a California garden

This week we have seen two key steps which look to be part of her journey to achieving her ultimate goal of entering the White House.

Meghan’s Vogue interview with the famous feminist Gloria Steinem protesting the Supreme Court overturning Roe vs Wade and declaring she’ll march on Washington DC was just the first of many political interventions that will become far more regular as she attempts to develop a woke base within the Democratic party.

But even more significant was the unconscionable decision by Buckingham Palace to bury the findings of a probe into alleged bullying by the Duchess of her staff during her unhappy years as a working royal, claims she has denied.

Such a move will delight Prince Harry, whose already bitter relationship with his relatives threatened to be ruined forever if any damaging details of the investigation by an independent law firm funded by the Queen had been revealed in yesterday’s Sovereign Grant Report.

Meghan’s political future could have been torpedoed before it began if her carefully crafted image as a compassionate woman of the people was revealed to be a sham by her aggrieved former staff members whose tales of their time working for the Duchess are, in some cases, very concerning.

Meghan told Oprah Winfrey in that famous interview, much of which has been disproved, that she was ‘silenced’ by the royal machine.

But ironically, it’s actually her ex-staff that have now suffered that fate, thanks to the gagging orders they reputedly signed before starting to work for the Sussexes.

Surely, if Meghan enters the political realm, the folk who claim to have been treated badly by her have a right to be heard? 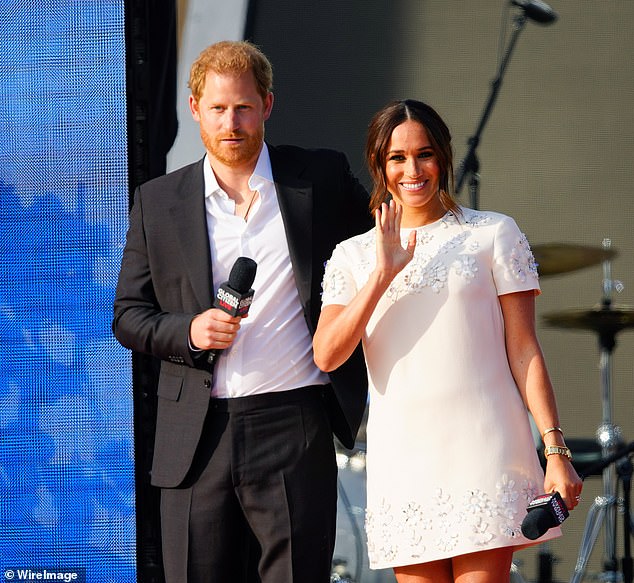 Markle said that her husband, Prince Harry (pictured together at an event in New York), was a feminist who reacted to the news of the repeal of Roe v. Wade in America in a ‘guttural’ way

That’s why Buckingham Palace must release the findings of the probe into her alleged bullying of staff.

I fear senior royals have put family relations ahead of what’s morally right by keeping the report forever secret and refusing to even detail what processes and policies have changed as a result of the complaints against Meghan.

While there’s no love lost for either Harry or Meghan among senior royals or courtiers, who I recently revealed view the couple as bigger pariahs than disgraced Prince Andrew, they’re acutely aware of the damage the couple could unleash on the monarchy with a lengthy public campaign suggesting they were subjected to discrimination.

Having escaped any damage from the report, Harry and Meghan are now free to step up their political campaigning in the US, which will be supported by the content they produce for Netflix and Spotify. 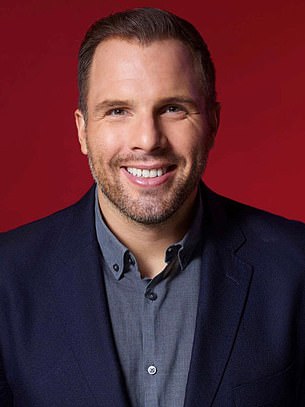 Not to mention the liberal media organisations in the tank for Meghan, like Vogue, which farcically introduced the former Suits actress turned Duchess as ‘a vocal advocate for paid leave and fair labour rights for women’.

The Sussexes’ own company Archewell even provided Vogue a black and white photo of a make-up free Meghan looking concerned while sitting barefoot on a couch, her hair pulled back, with a computer resting on her lap and mobile phone in hand.

It’s the sort of photo designed to move Meghan’s carefully constructed image away from a privileged ruler with staff to deal to her every whim to a humble campaigner sitting at Gloria Steinem’s dining room farmhouse table cold calling voters during lockdown before the last election.

Meghan recalled ‘The [presidential] election was coming up soon and we both knew the value of women and everyone getting out to vote. The ripple effect of elections matters so much, and that’s what we’re seeing now, unfortunately.’

As you can tell from that quote, the interview itself marks a significant upping of Meghan’s political rhetoric, throwing out any pretence of royal neutrality and coming closer to a formal endorsement of the Democrats.

Referring to Roe vs Wade, she added: ‘We have to channel that fear into action. We can start this November in the midterms. I know hearing that feels so repetitive, but we have to vote, every time, from local elections to state and national elections.’ 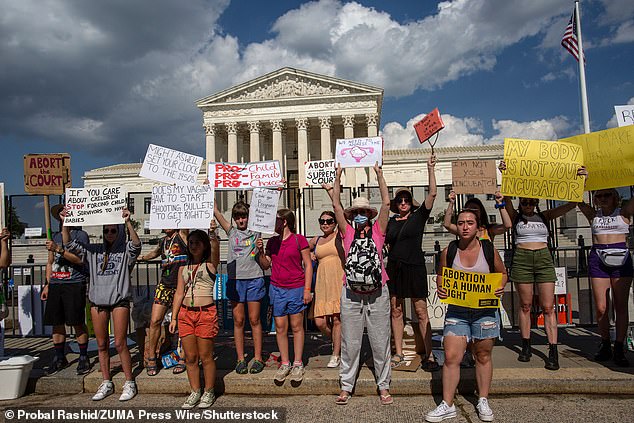 Abortion-rights activists are seen protesting the decision to repeal the 50-year-old law outside the Supreme Court building in Washington D.C. on June 25 after the news broke

She said: ‘Men need to be vocal in this moment and beyond because these are decisions that affect relationships, families, and communities at large. They may target women, but the consequences impact all of us. My husband and I talked about that a lot over the past few days. He’s a feminist too.’

And in a post-Megxit mission statement, Meghan even vowed that she and Steinman ‘will be taking a trip to DC together soon’ to advocate for the Equal Rights Amendment.

She declared: ‘Being home, seeing what’s happening in our country and feeling energised and motivated, if this is the type of legislation that we need pushed through, then this is a moment that I am absolutely going to show up for. Not just because it’s what we need as women, but it’s what we need as people.’

That almost sounds like a future campaign ad for the 2032 Democratic primaries.

Meghan is banking on the fact that in a decade the rest of the US would have caught up to the delusional virtue signalling woke politics of California.

The woman has no idea about middle America or the rust belt or how to appeal to independents.

But she has star power, which will at least get her a hell of a lot of publicity.

The only certainty is that Meghan Markle, as the highest profile Democratic political activist in the world, is going to cause even more headaches for the British Royal Family – and she doesn’t give a damn.