Two years ago, when Jesy Nelson first revealed she had tried to kill herself after being subjected to relentless trolling about the way she looked, there was an outpouring of social media love.

The Be Kind brigade was out in full voice, championing the vulnerable singer – then a member of the world’s most successful girl group Little Mix – for being open about her insecurities and telling anyone who would listen they should stop commenting on her appearance.

Funny then that it’s those hypocrites who have this week started relentlessly taunting the very same Jesy for so-called ‘blackfishing’.

You see, now that she’s a solo artist having left the band, Jesy is in the line of fire for upsetting the woke mob, as I like to refer to them.

The ‘blackfishing’ term was originally created in 2018 and used to describe someone pretending to be black on social media for personal or financial gain.

What the hell? Since when was being tanned racist. If that’s the case we might as well cancel the whole cast of TOWIE today.

I’m partial to a touch of the St Tropez during winter myself – and it’s certainly nothing to do with imitating another culture, but rather making it look like I’ve had at least a few minutes of sun in the past month.

On a more serious note, many young women with serious hang ups about their body, as Jesy has openly spoken about, have a condition called ‘tanorexia’, a compulsion to darken their skin that is similar to the behaviour connected to an eating disorder like anorexia.

Jesy, for her part, has insisted she would never ‘intentionally do anything to make myself look racially ambiguous’.

As for fashion, are we seriously saying that what we choose to wear or how we style our hair should somehow be dictated by the colour of our skin?

How utterly ridiculous and counterproductive, given the increasing cultural influence that Africa and Asia are in particular having on globalised pop culture.

And the influence black American music has had on pop and rock and roll since its earliest days.

Generations of white performers have taken inspiration from black music, and paid it generous credit.

These days Elvis would never have been allowed through the doors of Sun Records in Memphis without being accused of ‘cultural appropriation’.

And Mick Jagger would have been cancelled the minute he started belting out R’nB classics in the pubs of Dartford.

Surely, anyone sane can agree this is a route we don’t want to take as a society.

It’s very interesting to me that no one is accusing Eminem of ‘blackfishing’ despite the fact he’s a white gangster rapper who wears baggy jeans.

Either way, this scandal has turned what should have been a hugely significant moment of celebration for Jesy – the release of her first solo single called Boyz with the top US rapper Nicki Minaj – into something deeply disturbing. Overnight she has, yet again, become one of the most trolled women in the world.

Sadly, feeling the need to justify herself, Jesy has said in a livestream with Minaj today that her darker skin tone in the Boyz video was down to spending time in Antigua before the shoot.

And she added: ‘I personally want to say that my intention was never, ever to offend people of colour with this video and my song because, like I said, growing up as a young girl, this is the music that I listened to.’

On her hairstyle, she added: ‘I genuinely didn’t think I was doing anything wrong, because I’ve got naturally curly hair.’

Nothing excuses the toxic bile being aimed at Jesy Nelson by the keyboard warriors, especially Little Mix fans who just a few months ago idolised her.

For the record, I am neither Team Little Mix or Team Jesy – I love them both equally and have such a soft spot for the ladies.

I was the first journalist to ever interview the group in the canteen of ITV in 2011, when they were so terrified about what they were doing they were all physically shaking.

And then 12 months later, I presented them with their first ever gong (Best Girl Band in the dearly departed DW Awards – hardly a Brit or Grammy!) where they teared up and declared they now felt like ‘sisters’.

And I felt like a proud distant relative watching the powerful quartet go from terrified schoolgirls to accomplished businesswoman, bossing it in the music industry, and even daring to sack their boss Simon Cowell (not something many X Factor alum get away with).

I have huge respect that, unlike their boy band contemporaries One Direction, the girls didn’t want to rip each other’s hair out at every opportunity.

Sure, there were the usual tensions of any band. But Little Mix stayed united for a decade with a mutual respect of their differences and not one member feeling like they were the standout star.

That’s why it’s so disappointing to see Jesy’s former bandmate Leigh-Anne Pinnock accused of encouraging the mob to join the pile on against her ‘sister’ this week.

In a message leaked by NoHun, Leigh-Anne allegedly encouraged the TikTok star to produce a negative post about Jesy, writing: ‘Do a video about her being a black fish… She blocked us. Cut us off. Horrible person.’ 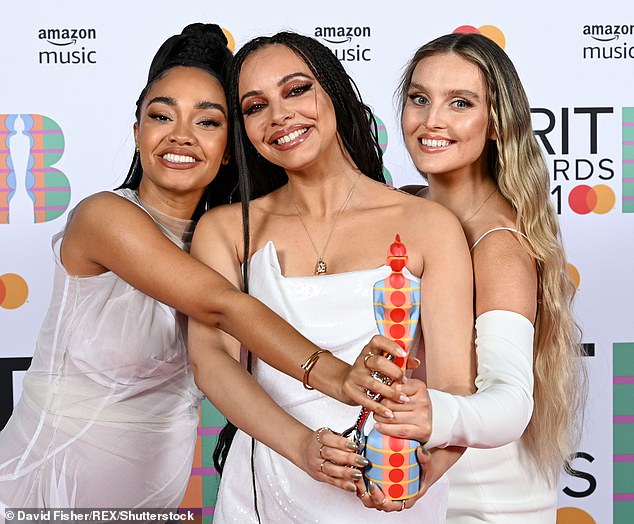 In a message leaked by NoHun, Leigh-Anne (pictured left) allegedly encouraged the TikTok star to produce a negative post about Jesy, writing: ‘Do a video about her being a black fish… She blocked us. Cut us off. Horrible person’

And today a source close to Leigh-Anne has appeared to brief The Sun that she warned Jesy about cultural appropriation and ‘blackfishing’ in the past, saying: ‘Leigh-Anne had a conversation with Jesy, trying to explain why she was upset and why it could be offensive.

She felt she had to address it while making her racism documentary, but it apparently fell on deaf ears. For Jesy to now claim that it has never been mentioned to her before is really rude.’

Having been in a band with Jesy for years, I’m sure Leigh-Anne knows as well as I do that she is the opposite of a racist and that her style choices were guided by deep insecurities about her body.

Perhaps it’s best left to controversial tweeter Nicki Minaj to sum up the situation in rap slang, writing in reference to Leigh-Anne: ‘JeLeigh btchs actin real messy. ~ if you know someone has been suicidal from bullying in the past, why try to get a bunch of ppl to bully them again about smthng else, on an even bigger scale? Shame on you— that’s rlly sad. You don’t know what ppl can deal with.’

And as Jesy told Minaj in their livestream today: ‘It’s just hard for me because I was in a group with two women of colour for nine years and it was never brought up to me up until the last music video I did with them.’

‘Blackfishing’ feels to me like a made-up concept designed for woke people to work each other up and take offence at something completely unnecessarily.

It’s this type of toxic cancel culture I am determined to rally against.

And when it’s turned into an online campaign against one individual who has already spoken openly about the near-deadly psychological impact on her of vile internet trolls that’s when you know it’s gone too far.

Wittingly or not, they are driving us all further apart.