Jake Quickenden has proven he is one of the strongest contenders in this year’s Dancing on Ice, as he topped the leaderboard for the second week in a row, tied with Love Island star Kem Cetinay.

Jake set the bar high early on with a score of 27.5 to kick off the show in style, performing a rock-style routine to Jet’s Are you gonna be my girl with partner Vanessa Bauer.

Jake’s strong performance came as head judge Christopher Dean received unexpected boos by the audience for his weak scoring of star Donna Air, awarding her a 5.5.

Riding high: Jake Quickenden was on fire yet again on Dancing on Ice this week, as he sped to joint top of the leaderboard with Love Island star Kem Cetinay

Jake and Vanessa were seen beaming after their performance, despite the former X Factor star admitting he was ‘a little disappointed’ receiving the same score as last week.

After his performance the ice panel were once again out in force to critique Jake’s latest effort, with head judge Christopher Dean saying: ‘He points his skates and they go in the direction he wants them to go. That’s a sign of a great skater.’

Jayne Torvill added: ‘I like you [Vanessa] are giving him more difficult steps, but I felt like the finish of the sequences were a little bit untidy.’

Ashley Banjo added that Jake did not fully invest in the character of the dance, but added: ‘You’re always going to get a high score.’ 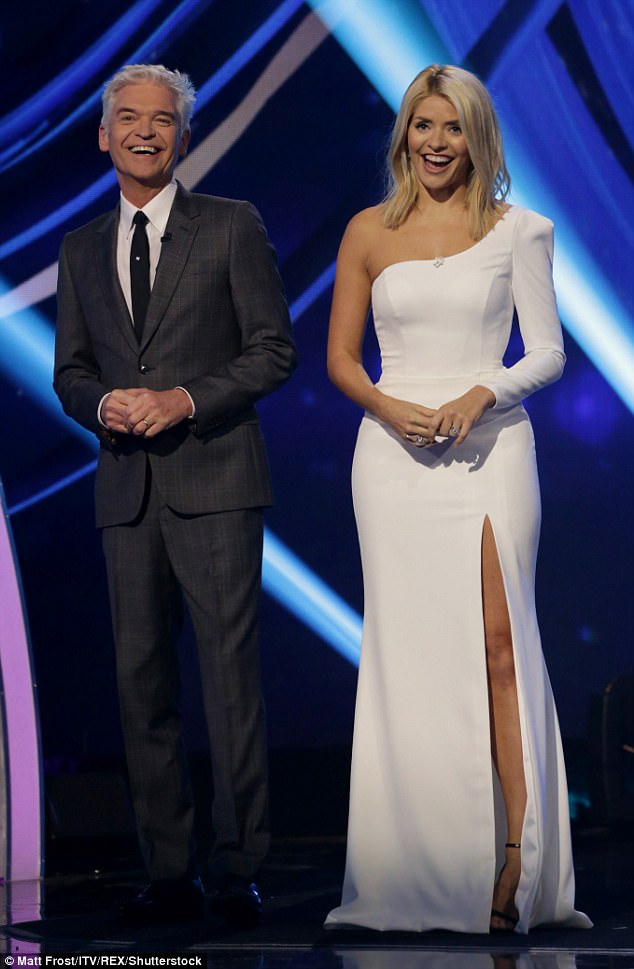 Dream duo: Hosts Phillip Schofield and Holly Willoughby were once again out in force to present proceedings, with Holly stunning a Grecian white gown 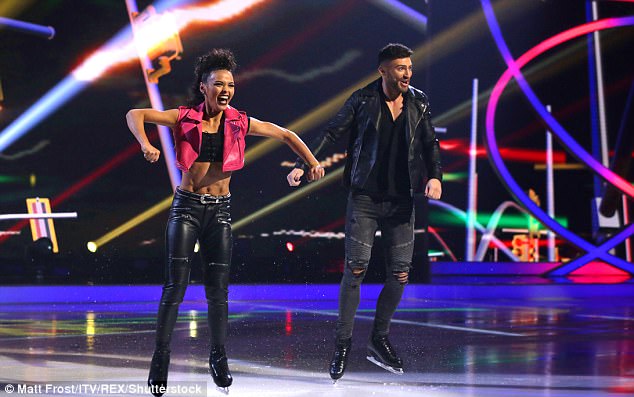 On form: Jake received overall positive feedback for his dance, though Ashley Banjo noted he didn’t get fully invested in the character

In a surprising turn of events, Chris received boos from the audience after the next performance, awarding a weak score of 5.5 to Donna Air and Mark Hanretty.

Despite the couple received 23.5, the same as last week, and Donna admitted that despite a solid score she ‘does put a lot of pressure on [herself].’

Chris had predominantly positive feedback for the performance despite giving a lower score than the rest of the panel, saying: ‘You can’t beat a bit of kneeling at the beginning of a routine. What I liked was the directional changes.’ 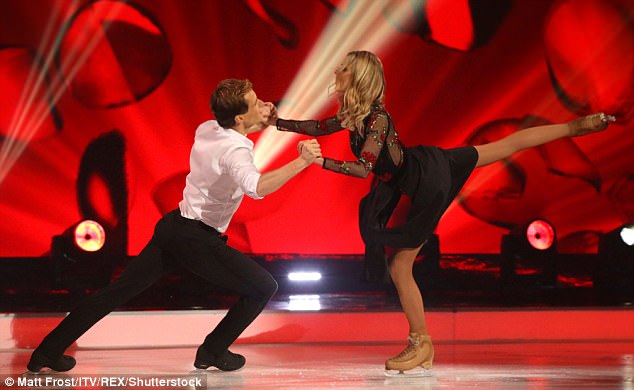 Elegant: Stunning Donna Air pulled out all the stops for a romantic routine to Leona Lewis’ Bleeding Love 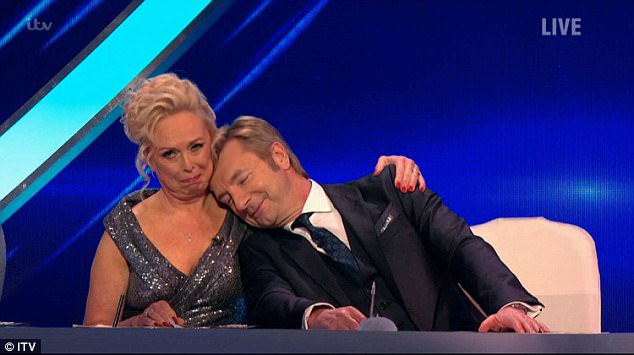 Shocking: Judge Christopher Dean was at the mercy of an angry audience, who booed when he awarded Donna a lower score 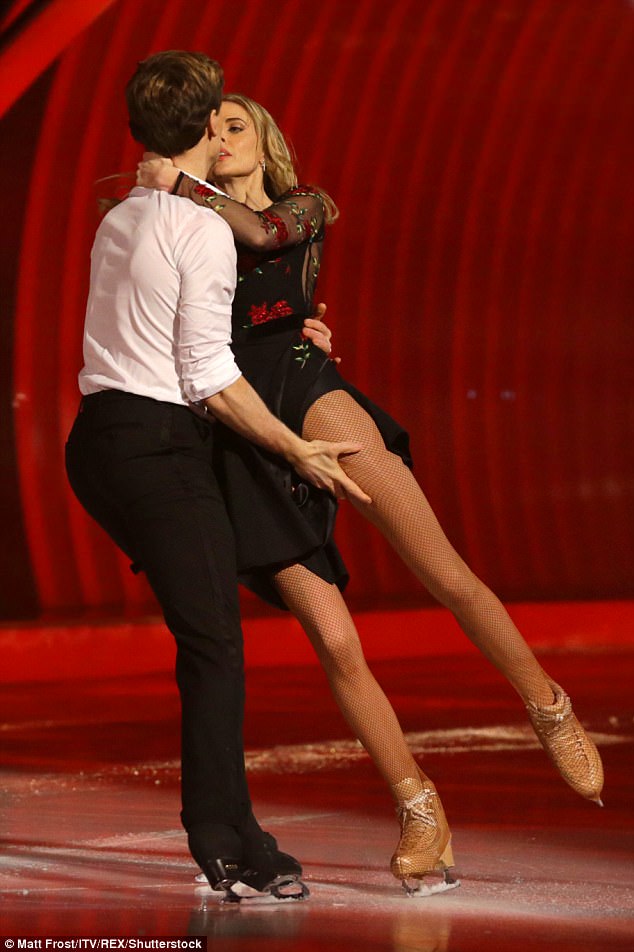 Intense: Donna looked incredible during the performance, and finished in overall second behind Kem and Jake

Jason Gardiner added: ‘Donna you are karate chopping your way from position to position. You have to express yourself even if you’re going through movements.’

Up next was athlete Perri Shakes-Drayton and Hamish Gaman, who struggled after wowing last week with a dance to Jess Glynne’s Hold My Hand.

After receiving a score of 19.5, down on last week, host Holly Willoughby appeared to cut off Christopher Dean during his judging.

As he began to say: ‘You weren’t on two feet as much,’ she abruptly said: ‘That’s where we’ll end there!’ 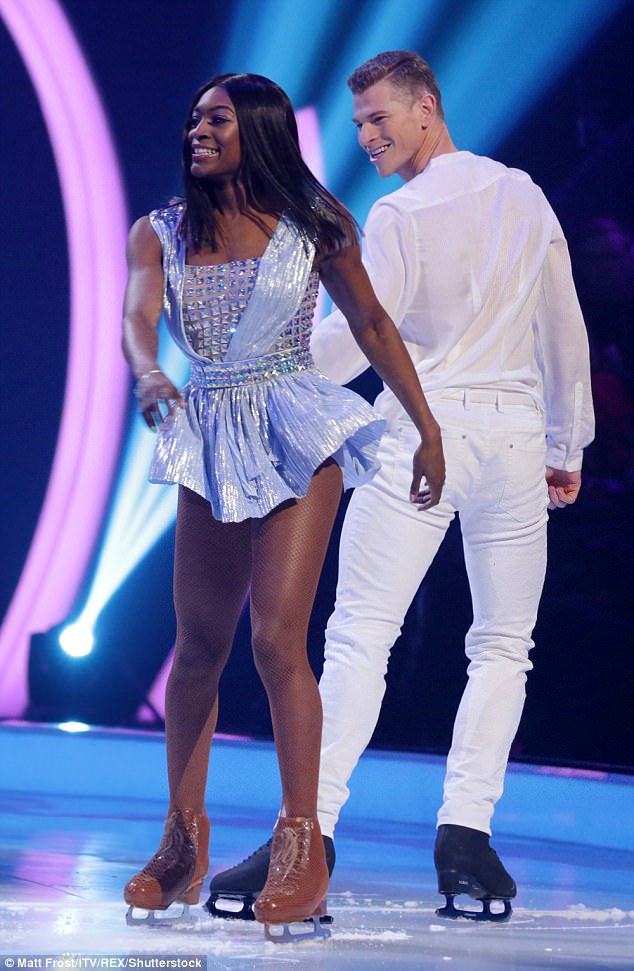 On the up: Perri Shakes-Drayton and Hamish Gaman went the energetic route this week, dancing to Jess Glynne’s Hold My Hand 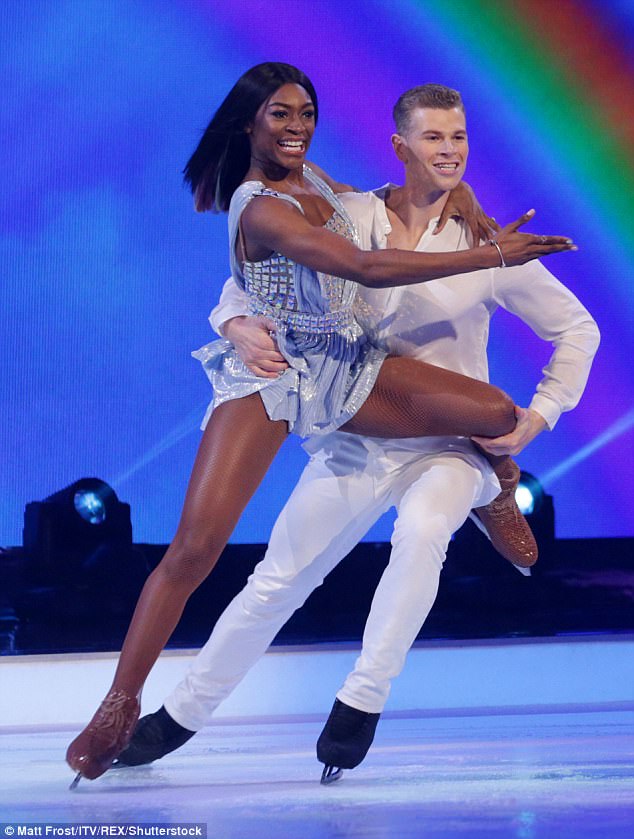 Showstopper: The athlete’s dance was slammed by Jason Gardiner, who said ‘it was more like Perish and Hammish’

Jason played up his persona as the Mr Nasty of ice dancing, saying: ‘It was more like Perish and Hammish. I am used to seeing you at such a level, but it seemed very disjointed. You didn’t seem to have unity, it was all a bit of a mess. You looked like you were still in the training room!’

Coronation Street star Antony Cotton came on in leaps and bounds from the previous week, jumping to a score of 20 after a performance by Fleetwood Mac’s Songbird.

As Jayne proclaimed: ‘You’re now skating!’ while impressed Jason added: ‘That is a big step in the right direction. I’m glad you didn’t rely on the humour aspect. Now you are in the race!’ 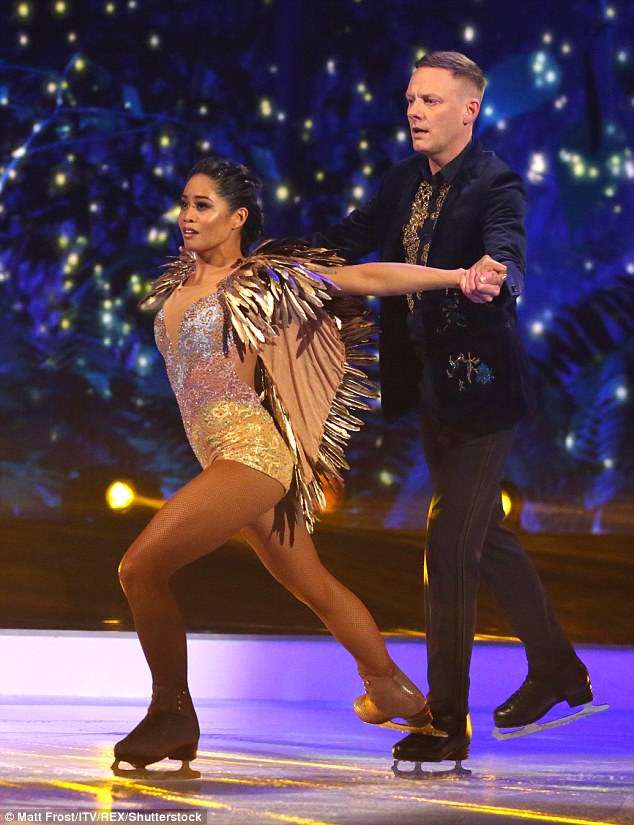 Getting better: Coronation Street star Antony Cotton came over in leaps and bounds this week, with Jayne Torvill praising the pair for taking a step back from the humour

Dancing to Lionel Richie’s Dancing on the Ceiling, Max received a respectable score of 22.5, and host Phillip Schofield joked that he might get in trouble for a lipstick mark on his cheek following the routing.

Despite Max proclaiming he is happily in a relationship with girlfriend Lauren Jamieson, he and dance partner Ale have made an impact with their palpable chemistry on the ice.

Max confessed he was devastated to hurt Ale during practice, admitting: ‘I have never hurt a girl physically like that before.’ 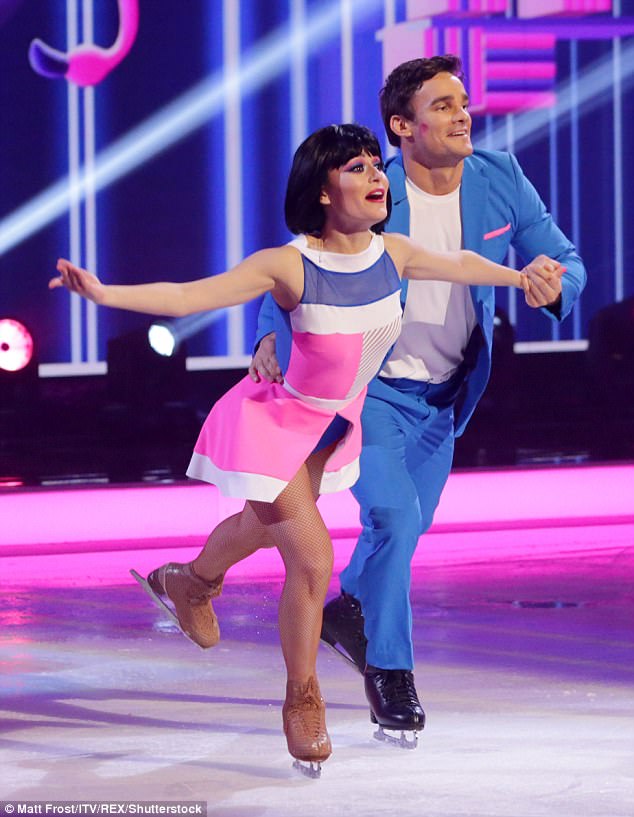 Back on track: Max was determined to win over the judges, and the couple proved they could nail it despite Ale’s nasty head injury in training

Chris proclaimed that Max was back in the game after his performance, while Jason said his routine was ‘lights on lights off.’

Singer Lemar was also looking to bounce back following a second consecutive week in the skate-off, performing to Coldplay’s Viva La Vida.

Stepping it up with a score of 19, Jayne proclaimed she was glad she had saved him last week, while Ashley said ‘that was your best performance by far.’ 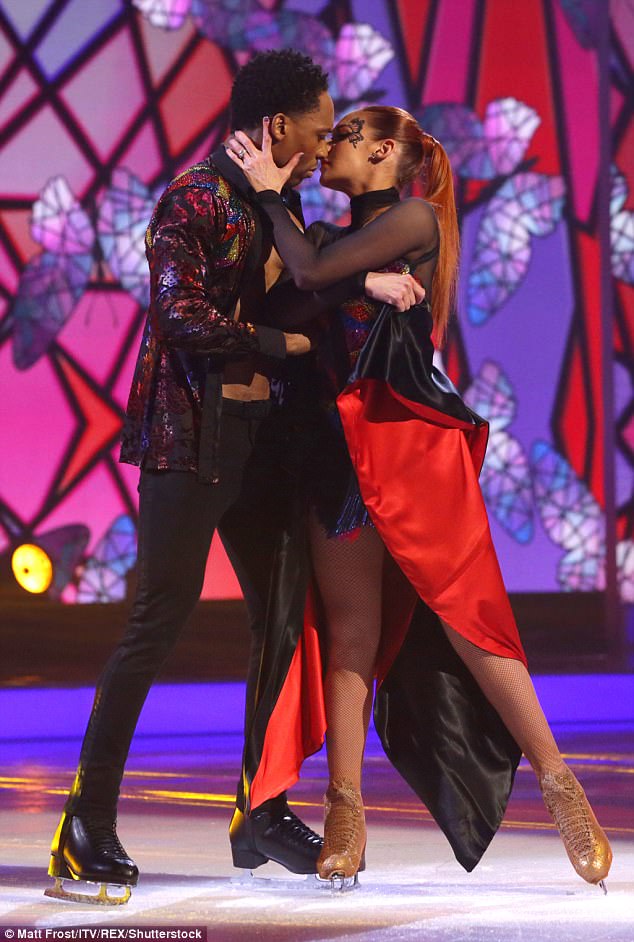 Sizzling: Desperate to not be in the skate-off again, Lemar performed a sizzling routine to Coldplay’s Viva La Vida

On a mission to prove she could skate without the support of her partner Dan Whiston, Cheryl Baker looked like she was having the time of her life on the ice as she performed Arethra Franklin’s Respect.

Receiving a score of 16, her highest to date, Jason was once again unimpressed, saying: ‘You’re like my great expectation of no expectation. I do love you exuberance, and actually there was more content this week. Again it’s the basics that still aren’t there.’

Cheryl bit back saying: ‘Get used to it it’s not going to change!’ 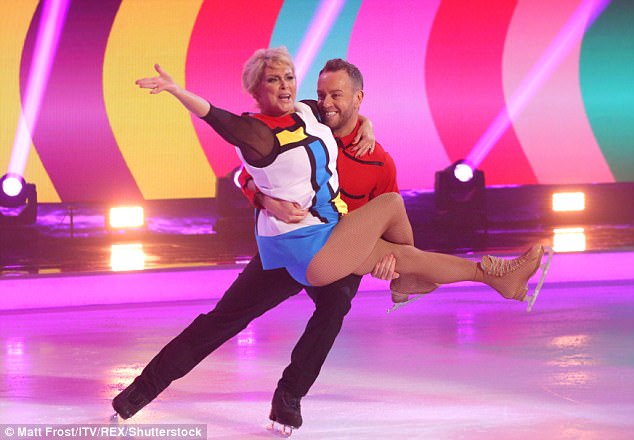 Alex Beresford played the King of Cool on Sunday night, dancing to The Temptations’ My Girl.

Awarded a solid 22.5, Alex revealed he had dedicated the performance to his late grandmother who he said was ‘his girl.’

While the judges overall said his skating was ‘coming along nicely,’ several noted his dancing needed to improve.

However, during the judging, fans in the audience were sent wild as Chris gave viewers a glimpse of the old Torvill and Dean magic, as the pair got up and demonstrated some stationery dance poses. 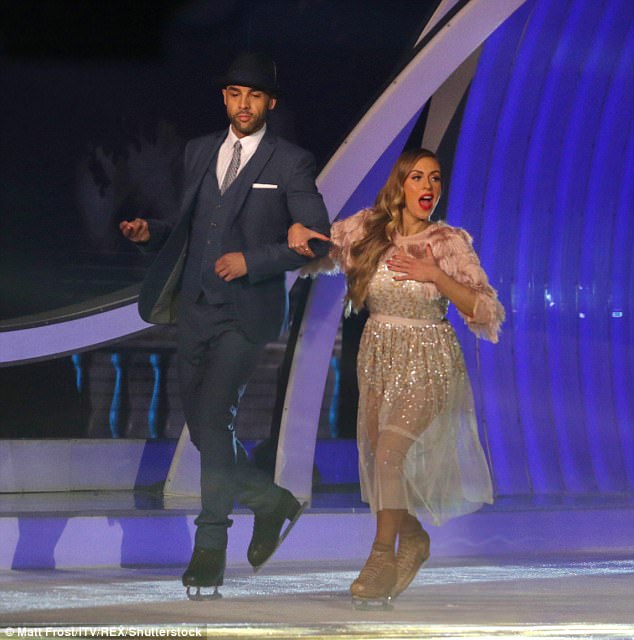 Coronation Street star Booke Vincent was out to play the Queen of Sass for her hip hop inspired routing.

Dancing to Jax Jones Instruction, while the pair improved with a score of 17.5, Jason angrily accused Brooke’s partner Matej Silecky of adding in an ‘unacceptable’ stationery interval in the middle.

Chris added: ‘There was definitely more sass, and I love your attitude. It is getting better, but we’ve got to skate at the same time.’ 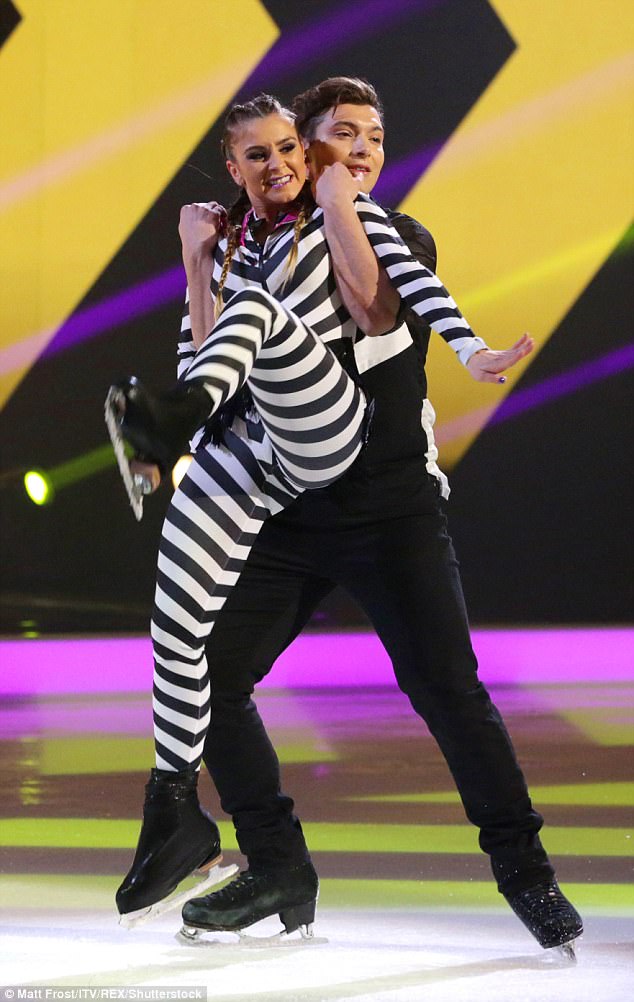 Closing out the show with a romantic dance to Sam Smith’s Stay with Me was Kem Cetinay and partner Alex Murphy.

Host Holly noted that she though the performance was ‘too romantic,’ to which Kem joked: ‘We’re good actors!’

Impressed Jason applauded the Love Island star for taking a step away from his ‘Kem-isms’ during the dance.

It proved to be a shocking night in the dramatic dance-off, as Perri and Lemar received the least number of votes placing them in the dreaded position.

It was Lemar’s third consecutive week fighting for survival, while Perrid found herself fighting for the first time.

Dancing to Kelly Clarkson’s What Doesn’t Kill You (Stronger) the beauty gave it her all in a bid to win the judge’s vote.