It was a shocking elimination from Dancing on Ice on Sunday night, as Stephanie Waring became the second contestant to be voted off.

The Hollyoaks actress struggled to hold back the tears after she lost out in the skate-off to Lemar, despite the ice panel admitting the singer stumbled in his performance.

As Stephanie said goodbye to the ice, she told hosts Philip Schofield and Holly Willoughby: ‘You know what? I’ve had the most amazing time, and I’m really proud of myself. Thank you to everyone, thank you Sylvain.’

On her way: Actress Stephanie Waring became the second contestant to leave Dancing on Ice on Sunday, losing out in the skate-off to Lemar

It was a shock to some as Lemar survived the skate-off, despite stumbling in his Save Me performance to Bruno Mars Grenade,.

After her performance to Ella Henderson’s Glow, Stephanie admitted she could have danced it better, though in the end it came down to choices of the ice panel.

As the judges made their final decision, Jason Gardiner said he was unsure whether to go with ‘stiff’ or ‘messy’, choosing to save Stephanie.

Ashley Banjo also chose to save Stephanie, but Christopher Dean disagreed choosing to save Lemar.

Jayne Torvill, the head judge with the casting vote, then chose to save Lemar, sending Stephanie home. 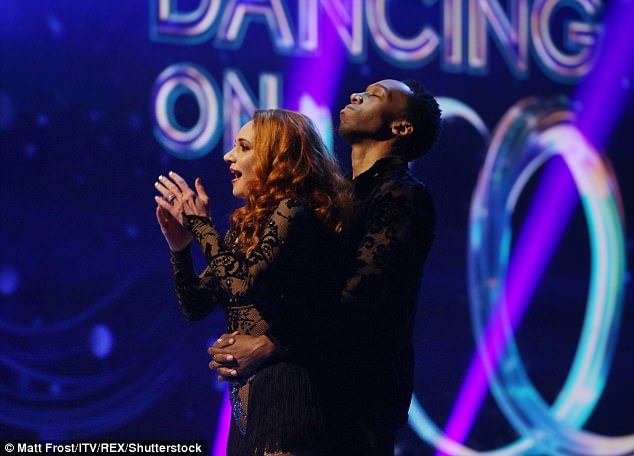 Stunned: Lemar and his partner Melody looked shocked at the news that they had been saved 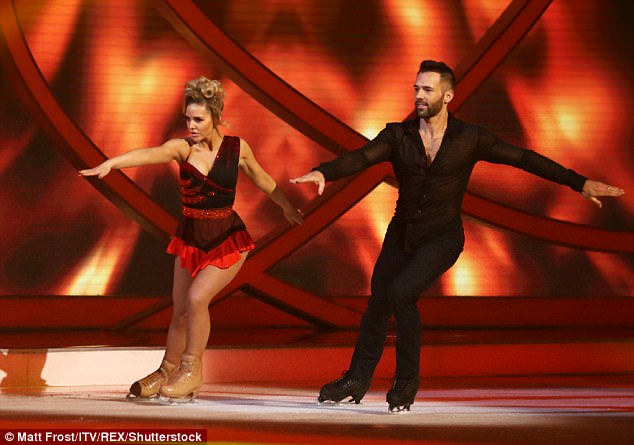 Head to head: Stephanie danced her Save Me performance to Ella Henderson’s Glow 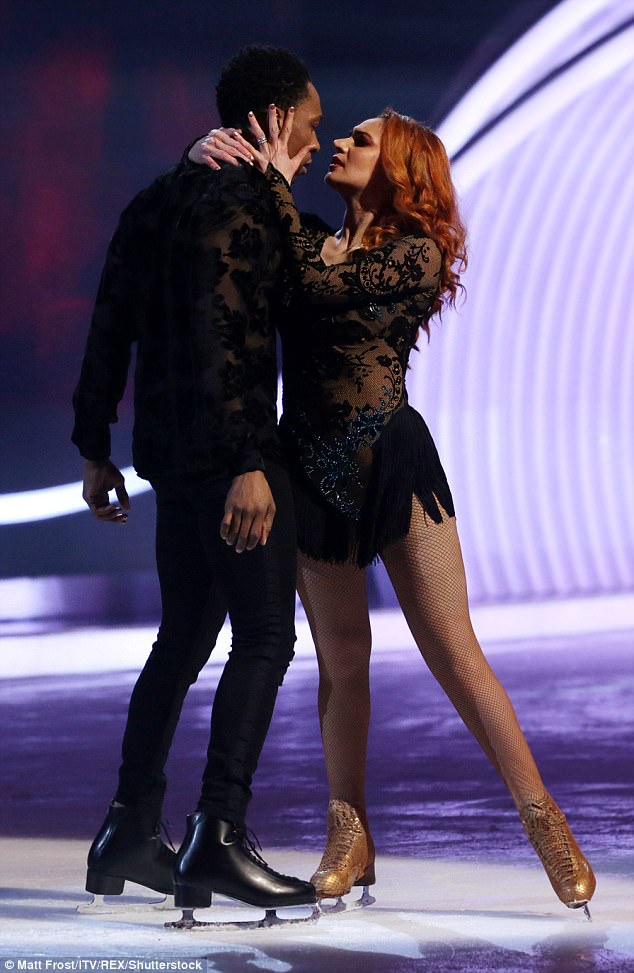 Messed up: Lemar once again danced to Bruno Mars Grenade, and suffered a stumble at the end

It truly was Sunday Night Fever as eleven couples performed for the second time, each to an iconic disco track.

Love Island’s Kem Cetinay was up first, and despite receiving a solid 23.5 points, Jason Gardiner played to his persona as the ‘Mr Nasty’ of ice skating as he slammed the performance.

Of Kem’s dance to The Pointer Sister’s I’m So Excited, Jason said: ‘Kem you are a natural showman. I love your energy, I love your enthusiasm. From the waist up you’re Travolta, from the waist down you’re revolting! I want to see you have some really good technique in there.’ 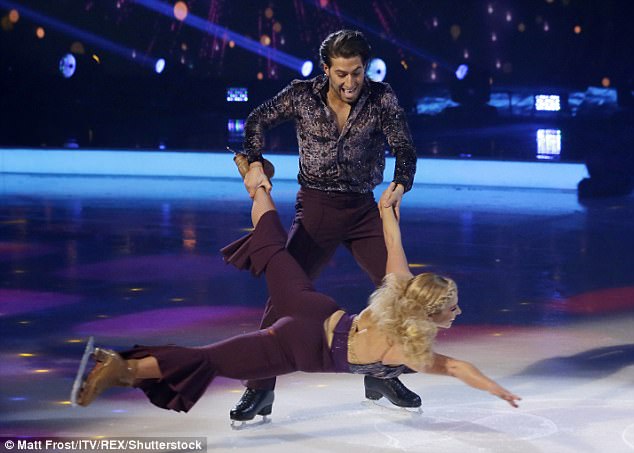 Slammed: Kem Cetinay scored a solid 23.5 points for his disco-themed performance, however his dancing was slammed by judge Jason Gardiner

Kem received a score of 23.5 for his routine, with partner Alex Murphy, and Jason’s fellow judges showered him with praise.

Christopher Dean said: ‘It was like a wasp in a bottle, but a really excitable wasp and really good wasp. The comedy was fantastic. What I like is the trust you have with each other.’

Ashley Banjo added that Kem ‘smothered the choreography in character,’ while Jayne Torvill said he was getting ‘better and better.’ 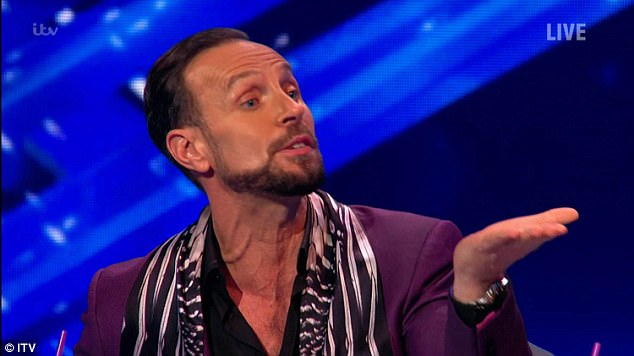 Brutal: Jason was quick to slam Kem’s performance, causing boos from the audience 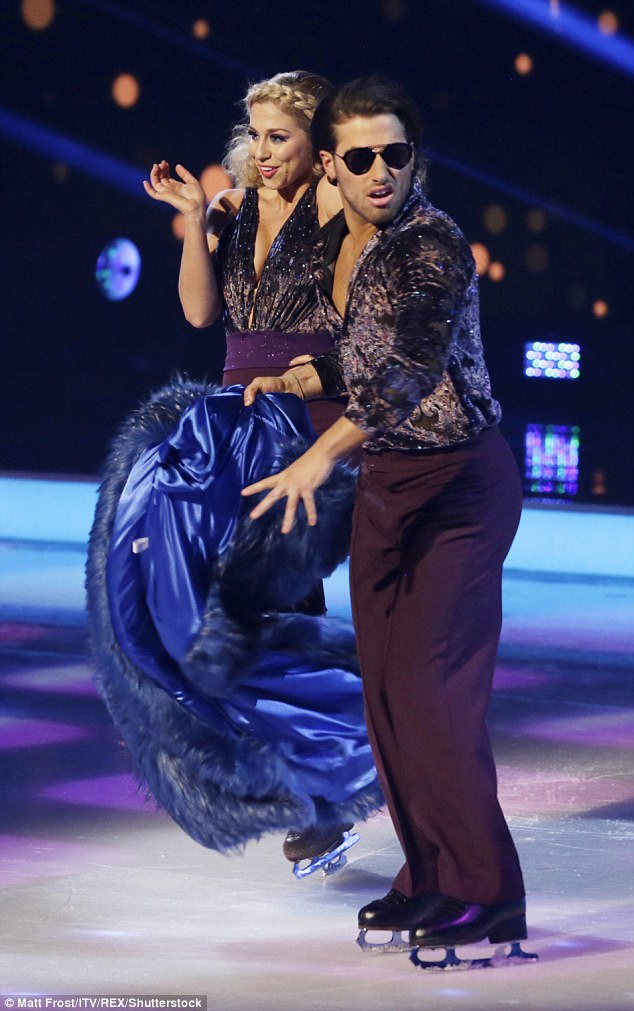 Energetic: Kem was ever the showman in the first performance of the night, scoring a series high of 23.5 points

Next up was Stephanie, partnered with Sylvain Longchambon, who managed to improve on her debut performance two weeks ago with a score of 17.5 after dancing to After the Love has gone by Earth Wind and Fire.

They agreed that the beauty needed to step out of her comfort zone in order to progress in the competition, with Jason Gardiner adding she needed to express more emotion in the dance.

Ashley added: ‘I think we saw more difficulty, it was just all around so much better. If you want to keep getting them bigger marks now, you really need to push your limit.

Coronation Street star Antony Cotton was up next with partner Brandee Malto, and sadly the judges were less than impressed by the Kylie Minogue performance. 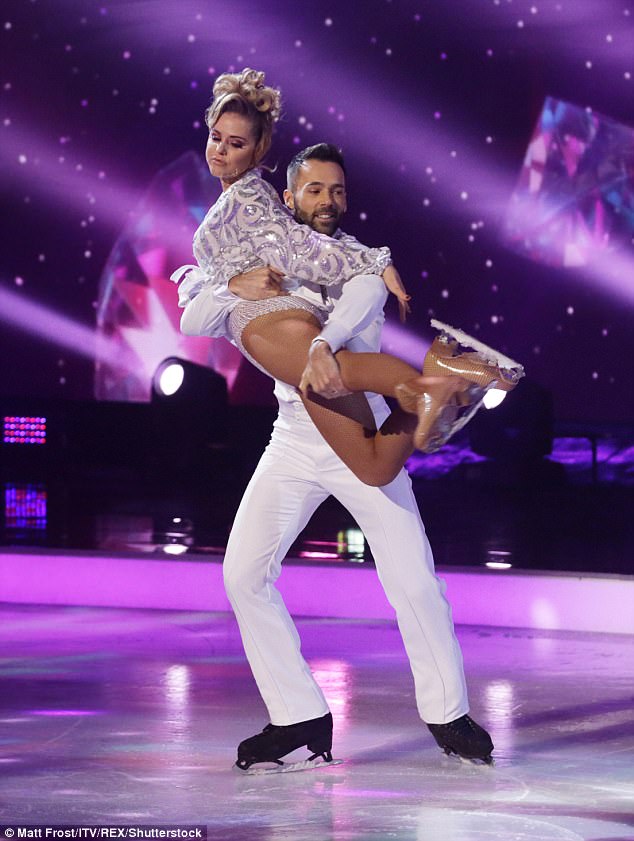 On the up: Stephanie Waring improved on her performance on last week, receiving a score of 17.5 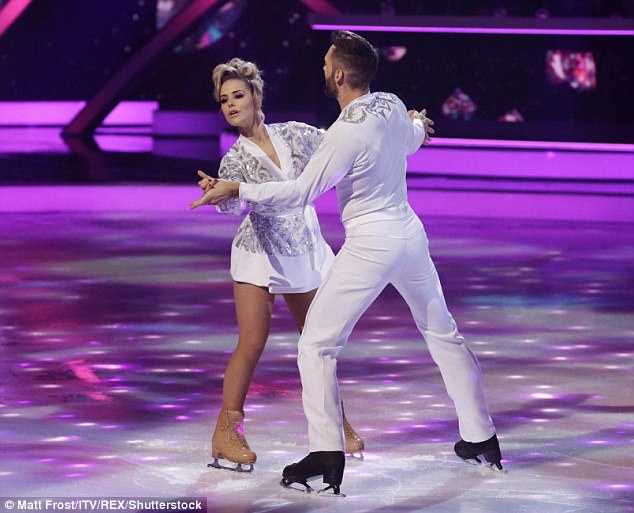 Static: Despite a high score, Jason added that the beauty only had one expression and needed to be more emotive

Dancing to Spinning Around, Antony received a disappointing 15.5, and the feisty star eventually bit back during the critique.

After Jason said the dance was ‘tentative’ with limited technique, Antony proclaimed: ‘Because I can’t ice skate!’

Ashley added: ‘I love you guys. You’re both so fun. It felt a bit safe and static. It needs to really move on from week one and i don’t think it did.’

As Antony made his exit after hearing his critique, Phil told the actor to ‘Shush’ as he reprimanded the panel for criticising his performance. 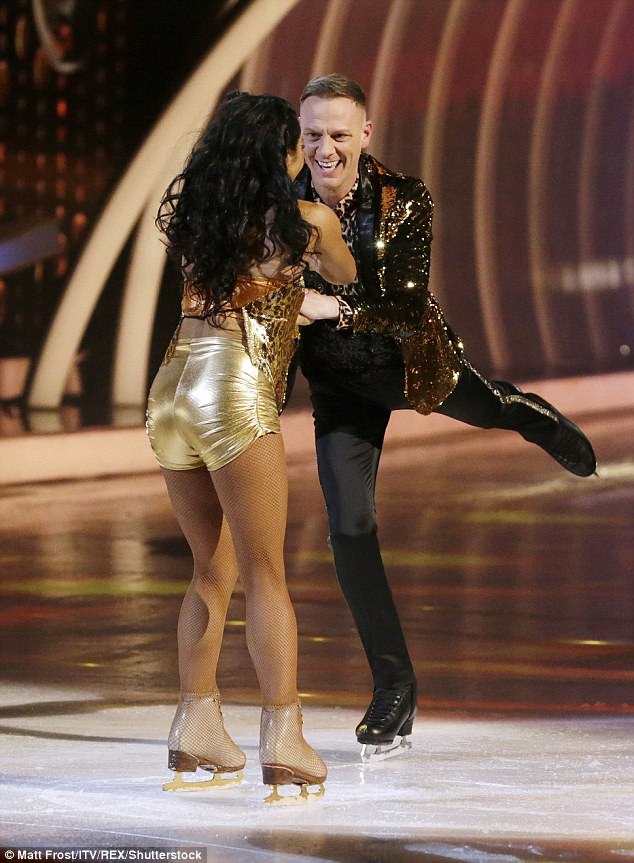 Biting back: Coronation Street Antony Cotton confidently proclaimed that he couldn’t ice skate after only scoring 15.5 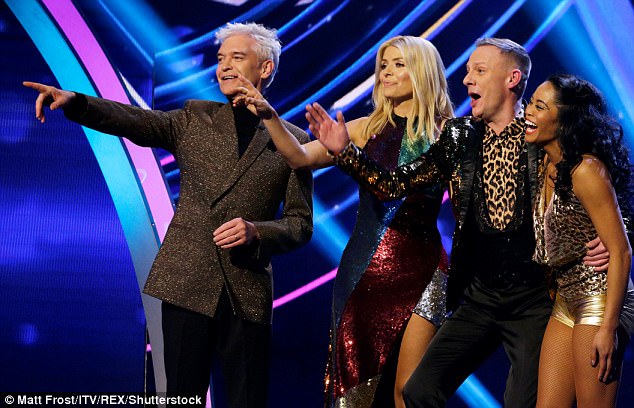 Feisty: Antony got the audience behind him during his mixed critique, leading host Philip Schofield to eventually tell him to ‘shush’ 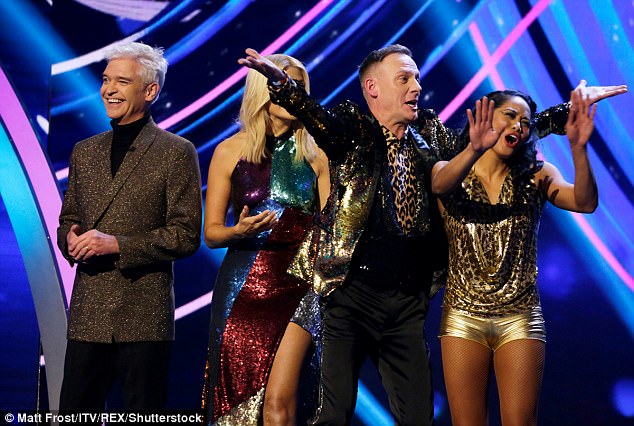 Cheer him on! Antony got the audience behind him after his scathing critique

And after topping the leaderboard last week, Max Evans faltered with his dance to Relight by Fire, receiving 19 points.

After attempting to mimic an iconic lift first performed by Torvill and Dean, sadly it failed to deliver as the couple had hoped.

Jayne said the life was ‘too ambitious’, though added she was flattered they chose to perform one of their famous pieces, while Chris said the dance was ‘underehearsed.’ 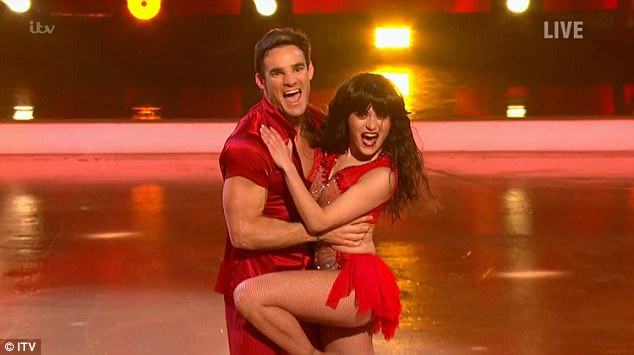 Disappointing: Despite receiving the highest score last week, Max Evans struggled to maintain his momentum after his performance, with an ambitious lift going pear-shaped 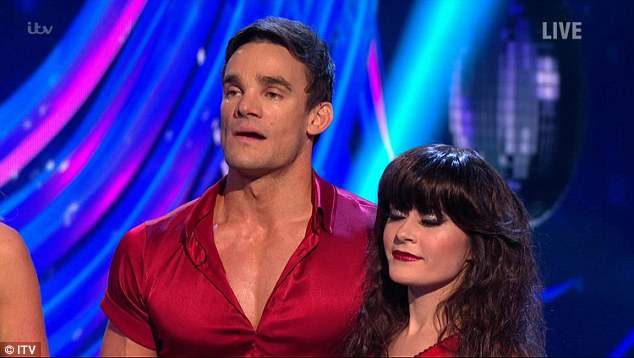 Gutted: Max and his partner Ale attempted a lift made famous by Torvill and Dean, which sadly did not go to plan

Perri Shakes-Drayton and her partner Hamish impressed their judges with a passionate performance to Wishing on Star by Rose Royce.

Scoring 20.5 points, Jason praised the duo’s partnership, as well a Perri’s commitment to learning the dances, while Ashley said she was ‘on the right track.’

Jayne noted that she did not see any improvement in the lines, while Chris agreed saying he wanted to see more skating. 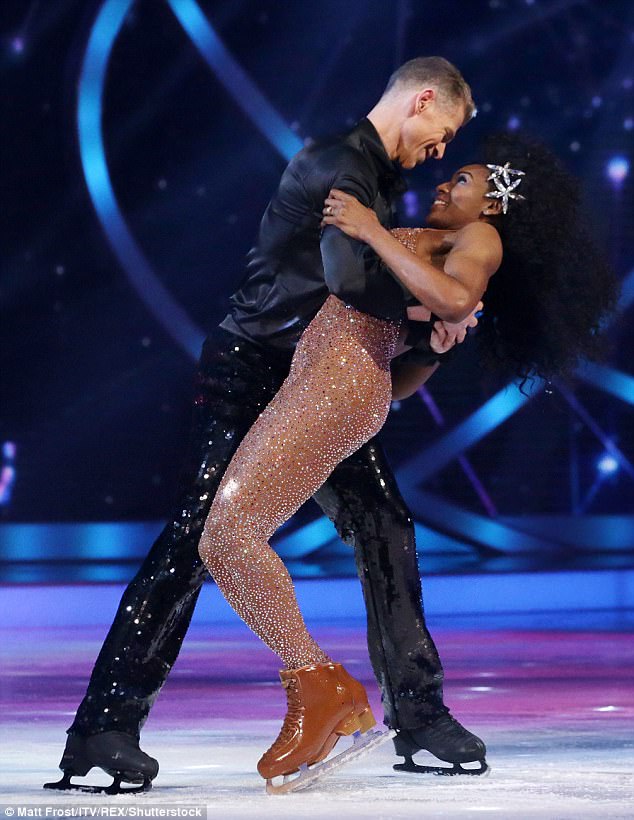 Progressing: Despite scoring 20.5 points, the judges were divided on Perri Shakes-Drayton’s performance, with Jayne saying she wanted to see more skating 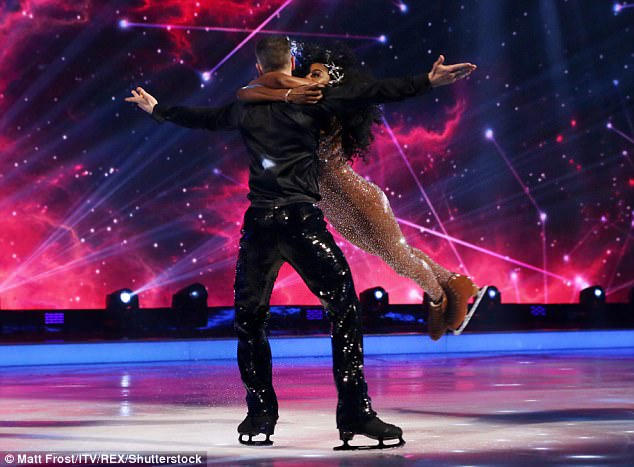 On the up: Ashley disagreed, saying the pair were ‘on the right track’

Good Morning Britain star Alex Beredford and partner Brianne Delcourt received a serviceable 20.5 for their dance to You Make Me Feel by Sylvester.

Jayne said that she was impressed by the speed of the dance, while Jason said: ‘This week I could see you weren’t quite on your game.’

And after scoring a lacklustre 17.5 last week, Donna Air wowed the judges this week with a sensational performance to I’m Every Women, placing joint top of the leaderboard with 23.5 points.

Dean called the performance ‘class’, while Ashley called her the ‘most improved skater in the competition.’ 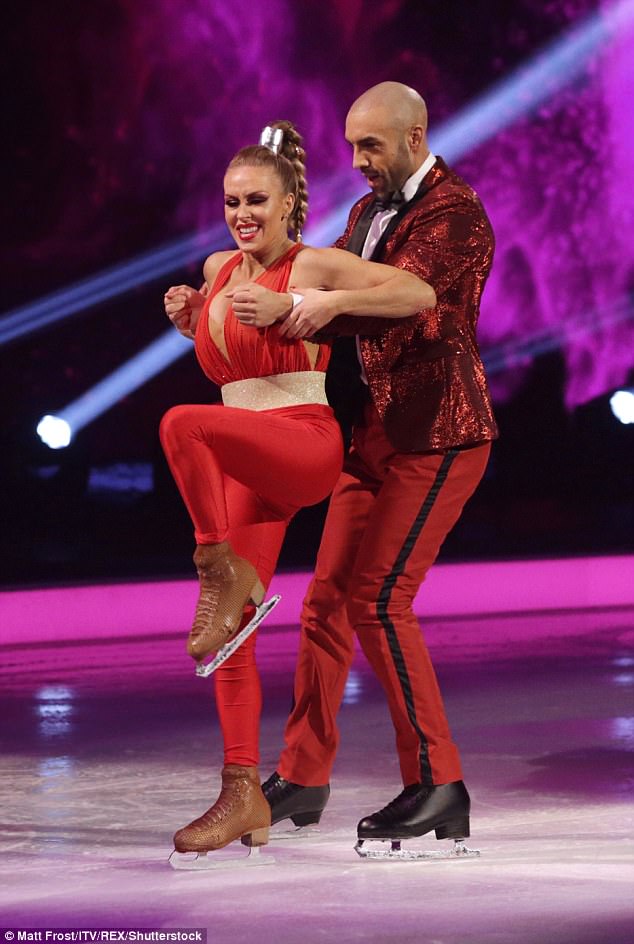 Struggling: Alex Beresford finished with a score of 20.5, with Jayne saying ‘you didn’t quite feel on your game’ 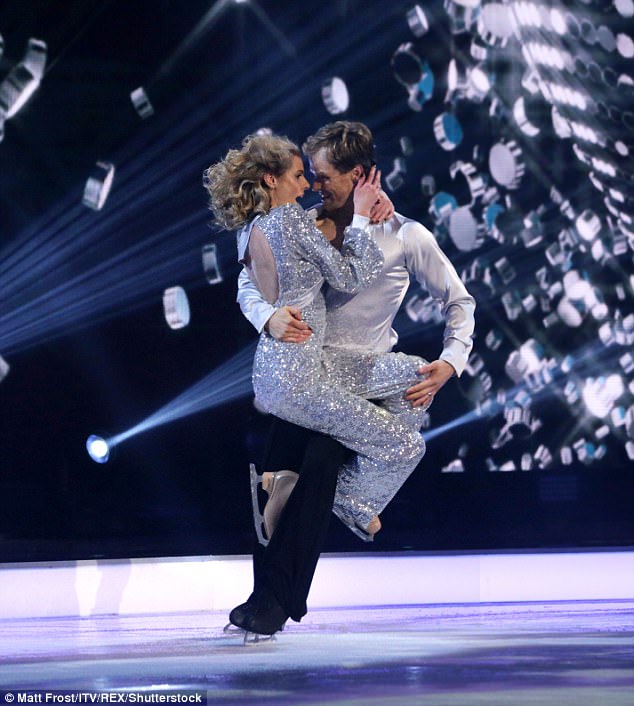 Winning woman: Donna Air came out with a sensational performance to I’m Every Woman, finishing joint-second on the leaderboard with 23.5 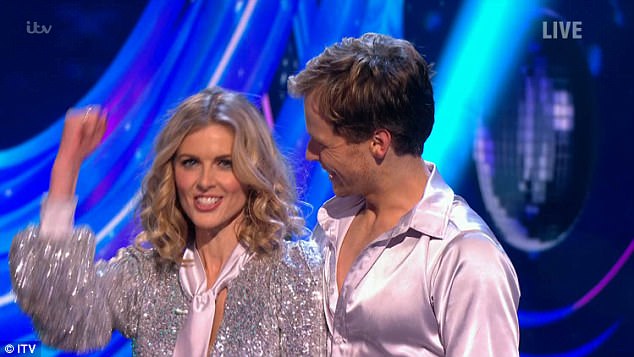 After ending up in the dance-off last week, Lemar was looking to impress the ice panel this week, with a soulful performance to The Commodores Easy.

Things got off to a rocky start when Lemar dropped a prop onto the ice, and a disappointed routine lead to a weak 16.5 points.

Ashley said the performance was ‘a bit fumbly,’ while Jayne added: ‘There hasn’t been a lot of improvement from last week.’ 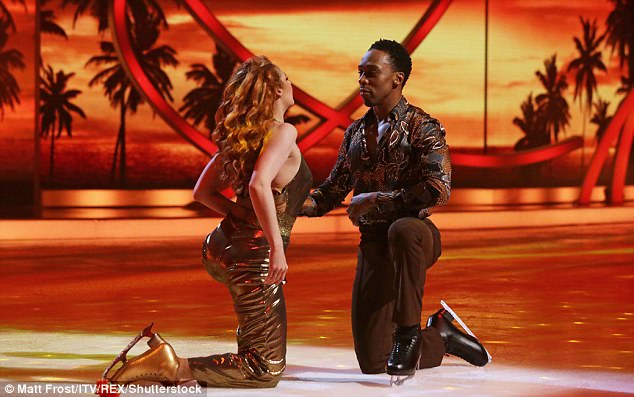 Blunder: Lemar’s performance got off to a messy start, dropping a prop he was supposed to hand to partner Melody 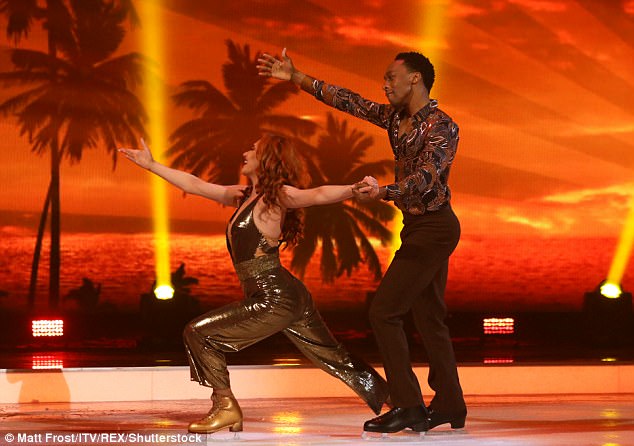 Skate-off again? Lemar finished with a score of 16.5 points, and Ashley said their dance was ‘a bit fumbly’

X Factor star Jake Quickenden came out fighting this week after setting the bar high with his debut, and the hunk managed to top the leaderboard with a staggering 27.5 points.

Playing the King of Cool to Jamiroquai’s Canned Heat, the panel said Jake ‘raised the bar’ with his dance, while Ashley added: ‘You made me want to get up and dance!’

Jason added: ‘You encapsulated Jamariquai! It was also great content. Really wonderfully choreographed routine and you two work so well together.’ 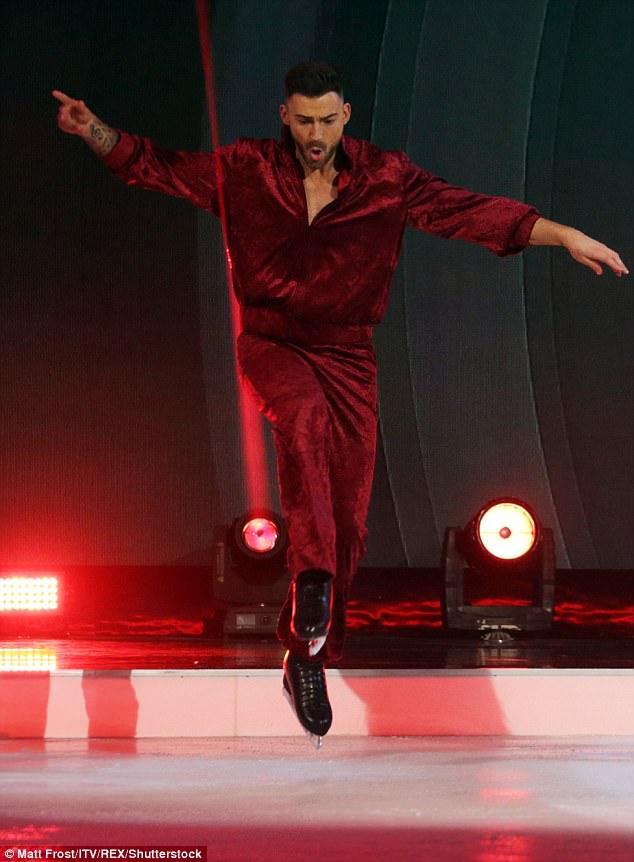 Showstopping: Jake Quickenden was the man on top this week, finishing top of the leaderboard with a series high of 27.5 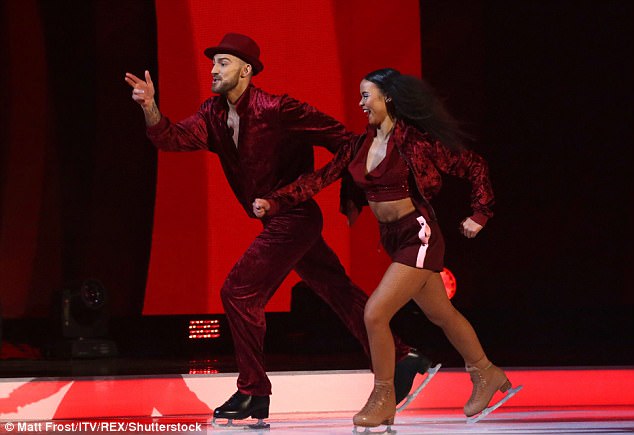 Suave: Jake was the King of Cool in a Jamariquai-themed performance, which Ashley said made him want ‘to get up and dance’ 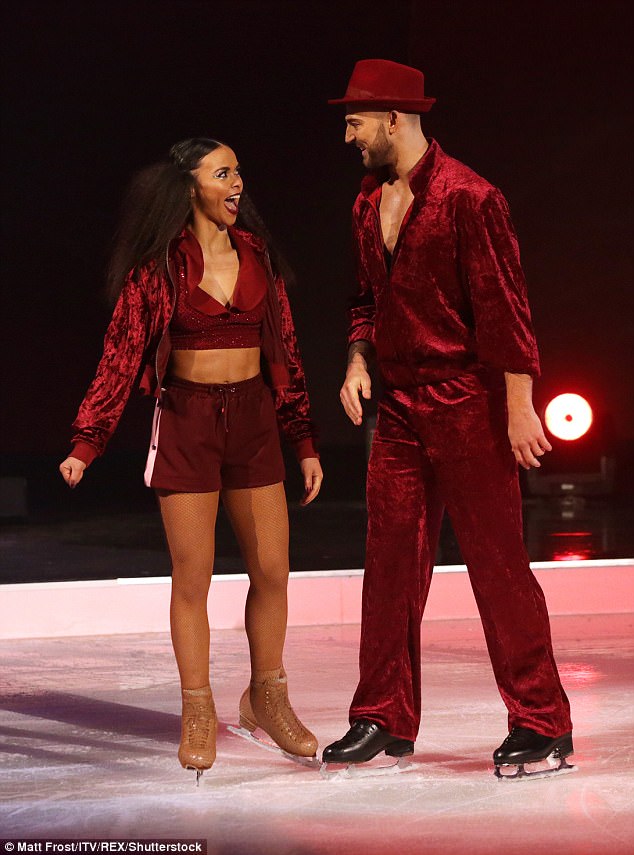 Winning: Jake has emerged as one of the frontrunners of the competition

And after finishing bottom of the leaderboard last week, Bucks Fizz star Cheryl Baker was looking to improve with a performance to disco classic Dancing Queen by ABBA.

The pair finished with a score of 14 points, with Chris saying the singer was holding onto her partner Dan Whiston too much.

Finishing out the performances was Coronation Street star Brooke Vincent and Matej Silecky, dancing to Daft Punk’s Get Lucky. 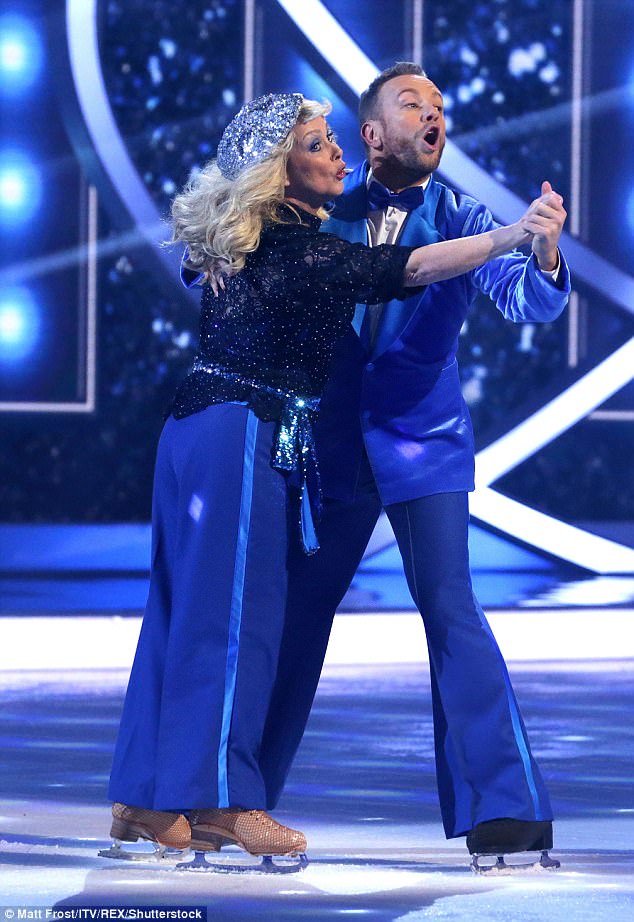 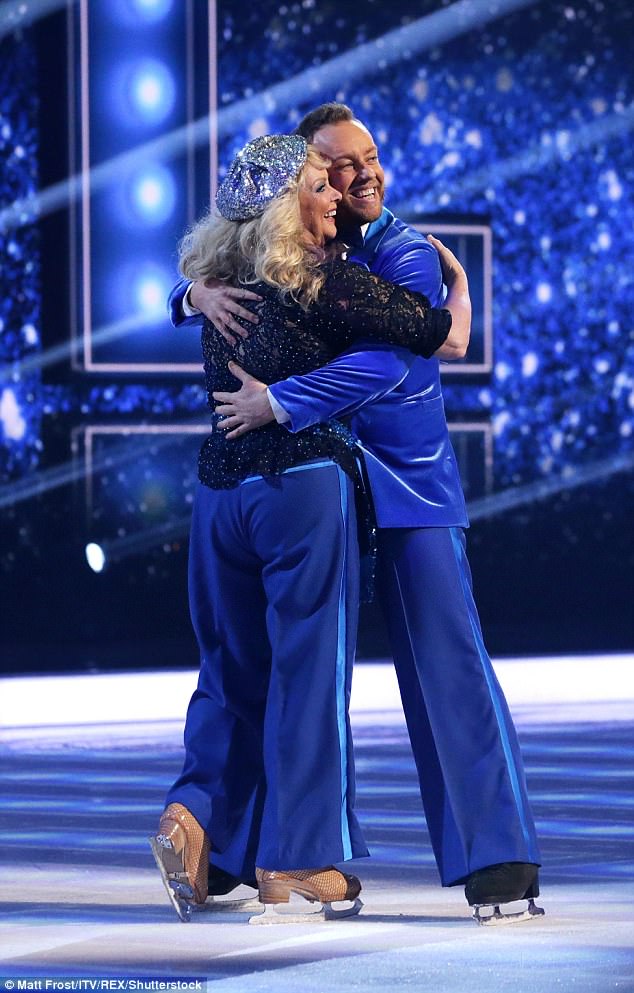 Supportive: The judges noted that Cheryl seemed to hold onto her partner too much, despite the singer looking like she was having a whale of a time with the ABBA-themed dance

Going for a futuristic theme, Brooke improved on last week with a score of 16.5, though the judges noted they wanted to see more solo skating.

Ashley said: ‘There was such an improvement, but when you went up into the lift you kind of look like a sack of potatoes. I want to see more stuff on your own.’

Chris added Brooke still did not see comfortable on the ice, while Jayne said she enjoyed the choreography. 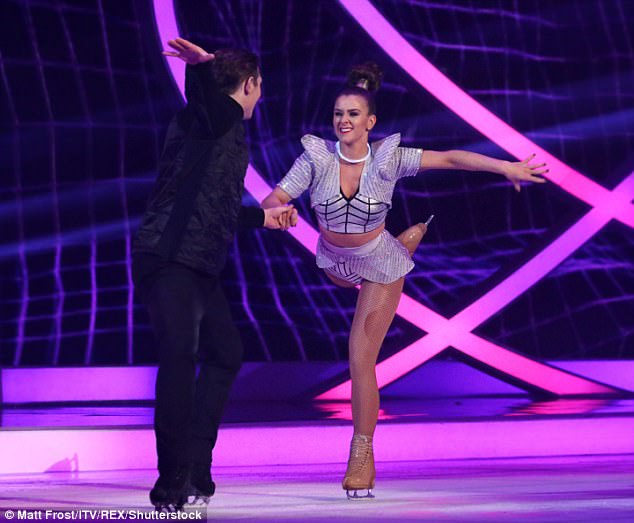 Closing out: Closing the show was Coronation Street star Brooke Vincent, who did a futuristic-style performance with a Daft Punk favourite 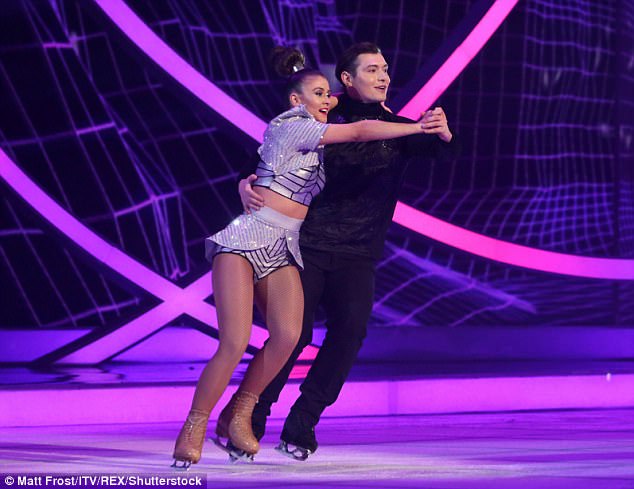 Going up: Brooke finished with a score of 16.5, though Chris added she did not look comfortable on the ice

Hosts Philip Schofield and Holly Willoughby looked as sensational as ever, even boarding the specially sparkled ice truck to head to the training rink.

Once again Phil was left red-faced by a hilarious throwback snap, showing the silver fox rocking 70s flares as he rode a bike with his brother.

As the presenter joked he was ‘astride a Chopper,’ the ice panel struggled to maintain their composure as they fell into hysterics. 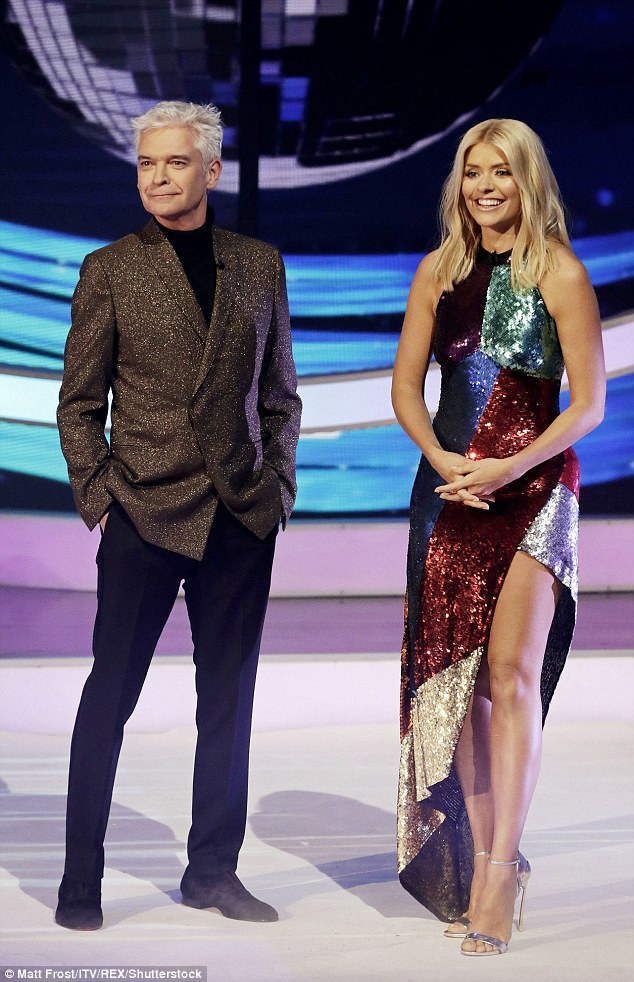 Fabulous: Hosts Philip Schofield and Holly Willoughby were as stylish as ever, with Holly stunning in a thigh-high split sequinned gown 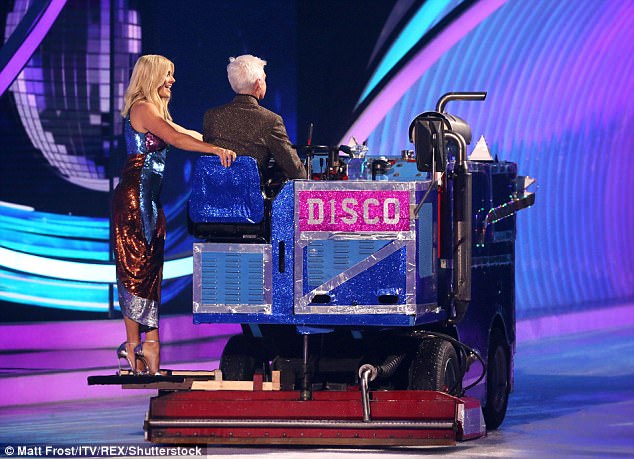 Epic arrival: The pair also boarded the specially sparkled ice truck as they headed into the training rink