Dancing On Ice has confirmed that it will be returning to screens on January 17.

ITV reassured fans on Wednesday that the hit show will be back as planned to provide some evening entertainment throughout the latest lockdown.

The news comes amid claims the celebs and their professional skating partners were concerned about the risk of coronavirus hitting the show and it being cancelled.

Almost time! Dancing On Ice has confirmed that it will be returning to screens as planned on January 17 (pictured, contestant Myleene Klass)

Confirming the return of the hit show, ITV tweeted: ‘Confirmed: Dancing on Ice returns Sunday 17 January at 6pm on ITV.

‘Phillip Schofield and Holly Willoughby once again return to present the show and the expert Ice Panel of Torvill and Dean, John Barrowman and Ashley Banjo.’

The show’s airing date of January 17 had previously been revealed just before Christmas and ahead of the latest lot of restrictions for the pandemic. 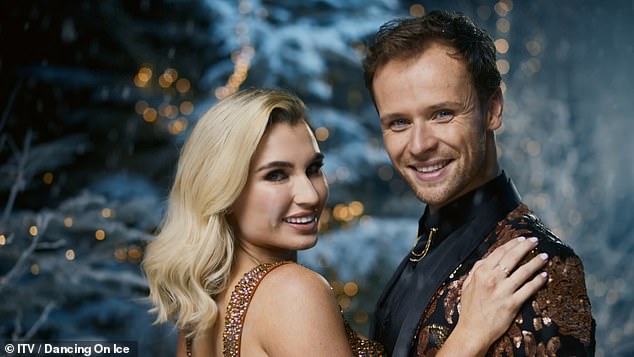 Confirmation of the show’s return also comes after a source claimed that although the series will be returning, things might not be as smooth as usual in the buildup.

The celebrity cast and professional skaters are also reportedly concerned that COVID-19 could interfere with filming and cause the show to be cancelled.

A source told The Sun: ‘Everyone is worried to be honest. They can’t practise and the celebs are nowhere near the standard they usually are.

‘There’s people scrambling around backstage with no real idea how it’s going to come together. It’s a bit of a mess!’ 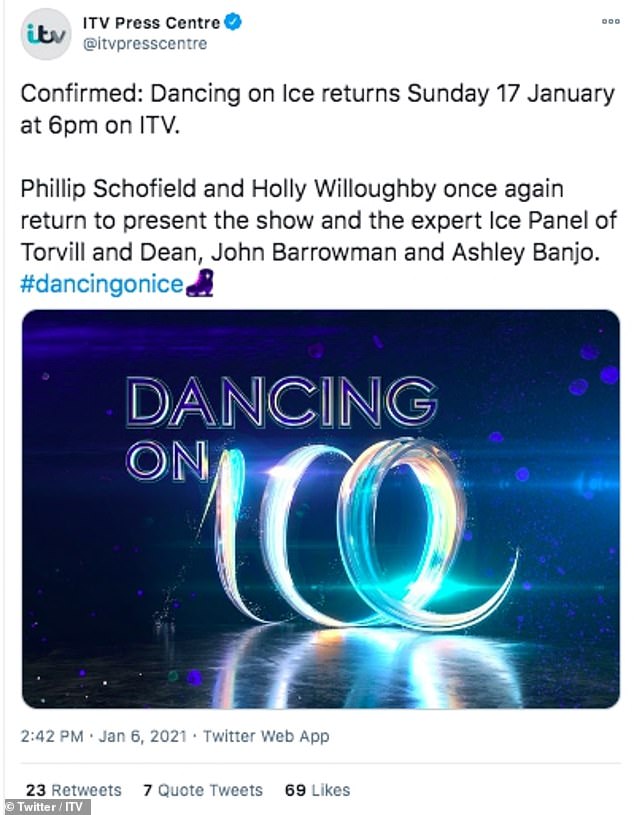 All set: The date of January 17 had previously been revealed just before Christmas and ahead of the latest lot of restrictions for the pandemic (pictured, the confirmation on Wednesday)

Despite the concern, the source said the cast and crew were very pleased with all the rules brought in to try and avoid coronavirus hitting filming.

An ITV spokesperson said: ‘We have stringent protocols in place to ensure the health and safety of all our contributors and staff which are routinely monitored and updated to reflect the current guidelines.

‘We’re in constant contact with our entire cast in training and there have been no concerns raised.

‘ITV takes the safety and welfare of everyone involved with its programmes extremely seriously and follows all government guidelines regarding Covid-19.

‘The government has confirmed TV production can carry on throughout lockdown.’ 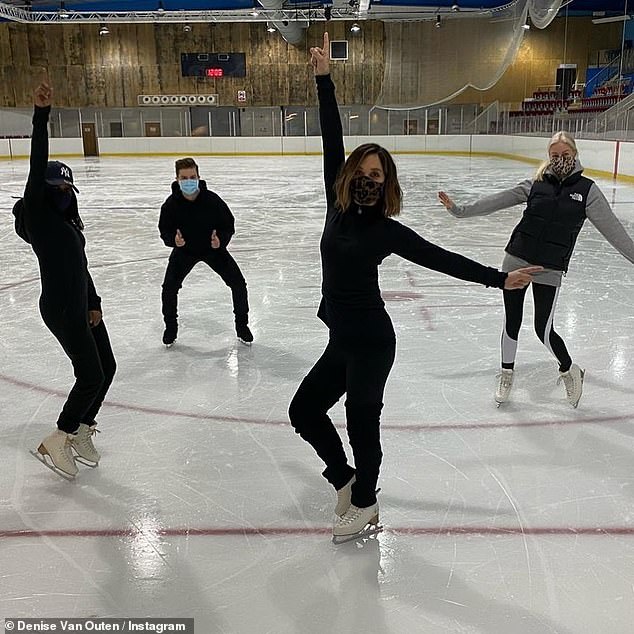 Back at it! Denise Van Outen and Myleene were back to Dancing On Ice training just two days after the Christmas festivities as they posed with Lady Leshurr and Sonny Jay

In addition, the Dancing On Ice cast have had regular coronavirus tests throughout their time training in preparation for the competition.

Ahead of the show’s impending return several of the stars have been seen hitting the ice rink to get some last-minute practice in.

Joe-Warren Plant and Vanessa Bauer updated fans on their first rehearsal in three weeks on Wednesday as they got back too it after the Christmas break.

While elsewhere it has been reported that celebs are hoping to nab themselves the best stylists on the crew ahead of the series launch. 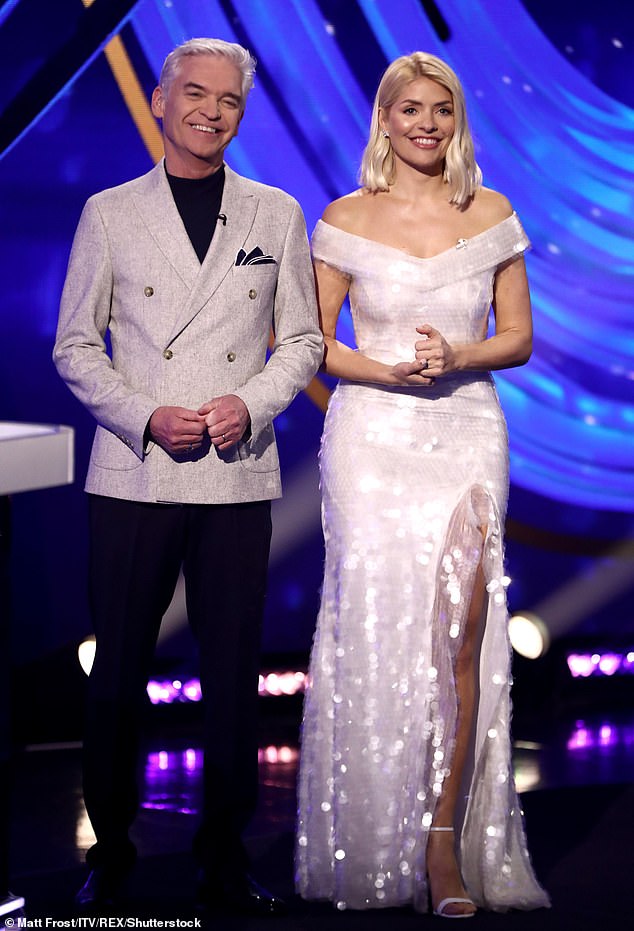 They’re back! Phillip Schofield and Holly Willoughby once again return to present the show (pictured during the 2020 series) 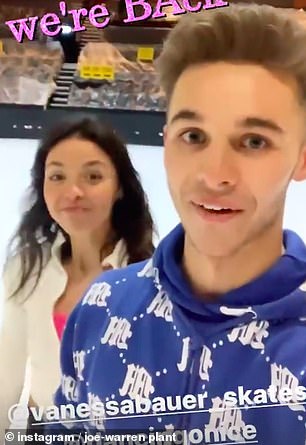 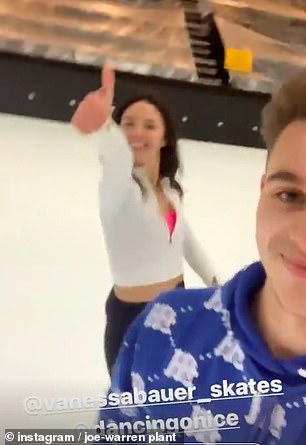 Hard at work: Joe-Warren Plant and Vanessa Bauer also shared a glimpse of their rehearsal to Instagram Stories on Wednesday

The likes of Becky Vardy, Myleene, Denise, Billie, Lady Leshurr and Faye Brookes, are all ‘competing to snap up the best’ of the bunch, according to The Sun.

A source told the publication: ‘Everyone wants to look their best and the show spends thousands on the industry’s best coiffeurs.

Matt, 44, said on the Keep Calm And Carry On podcast on Tuesday that those behind-the-scenes were keen to ensure the celebrities and skaters were looked after during their time on the show. 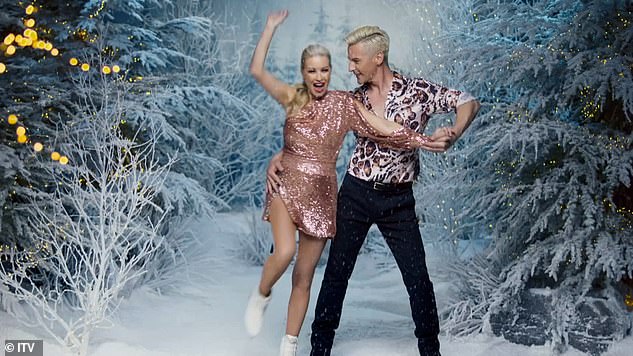 Yay: Denise, 46, showed off her incredible legs in a metallic pink mini dress as she put on a playful display with partner Matt Evers in a recent promo released for the show

Caroline tragically took her life at her London home aged 40 on February 15, a day after learning the CPS would be pursuing a case of assault against her following a row with beau Lewis Burton at her home in December 2019.

Discussing the increased services provided to stars, Matt explained: ‘Now more than ever we have a lot of support.

‘We’ve always had a little bit of support, but through the tragedies that have happened, they have implemented a lot more mental support.’

Matt went on to say that as one of the show’s professionals it’s his task to become a ‘best friend, babysitter and psychologist’ for his celebrity partner, on top of also teaching them how to skate proficiently.

ITV is extremely cautious about mental health matters following a slew of tragedies of guests or hosts of some of its most popular shows.