Dancing On Ice’s Brianne Delcourt and husband Kevin Kilbane are expecting their second baby together.

The couple – who welcomed daughter Olivia Mai in February – have shared their excitement at being pregnant again, and confessed that they’re ‘just going to have to wing it’ when it comes to having two children under the age of two.

Professional skater Brianne, 40, is already mum to her daughter Gracie, five, while former footballer Kevin, 44, also has two daughters – Elsie, 17, and Isla, 15 – from his previous marriage to ex-wife Laura.

Congratulations! Brianne Delcourt, 40, and her husband Kevin Kilbane, 44, are expecting their second baby together, just nine months after welcoming their first child together

The professional skater told OK! ‘We’re extremely excited, but we know it’s going to be a mad house! We’re just going to have to wing it. Olivia and the new baby are only going to be 15 months apart.’

Kevin also spoke of his fears after Brianne suffered haemorrhaging while carrying Olivia inside her, admitting: ‘We’d never heard of a haemorrhage in pregnancy so when you’re told that you think the worst.

‘It was worrying to see how the pregnancy was progressing and the first 10 weeks involved a lot of appointments and scans.

‘Bri was told not to bend down and pick the girls up but, of course, she didn’t listen to a word they said and it is hard with kids.’ 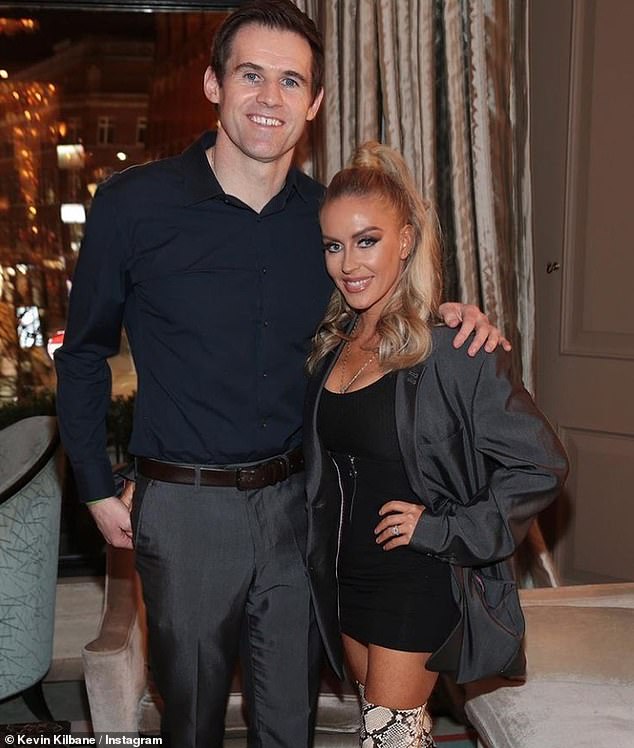 Brianne and Kevin first met in 2019 when they were paired up for the 2020 series of Dancing on Ice.

In March, the couple admitted they have both had to make ‘huge sacrifices’ since they first got together, with Brianne quitting her role on Dancing On Ice after a decade last year.

Speaking to OK! magazine, Kevin said: ‘We’ve both had to make huge sacrifices, including Bri quitting her job, but they haven’t felt like sacrifices because everything has felt so natural with us coming together. I wouldn’t change a thing as it’s been perfect.’

The former footballer added that it was a ‘big deal’ for Brianne to give up her career and move back to her native Canada and said he is ‘in awe’ of her.

Brianne has no regrets about departing the show as she feels that being with Kevin has given her a level of contentment she has never known. 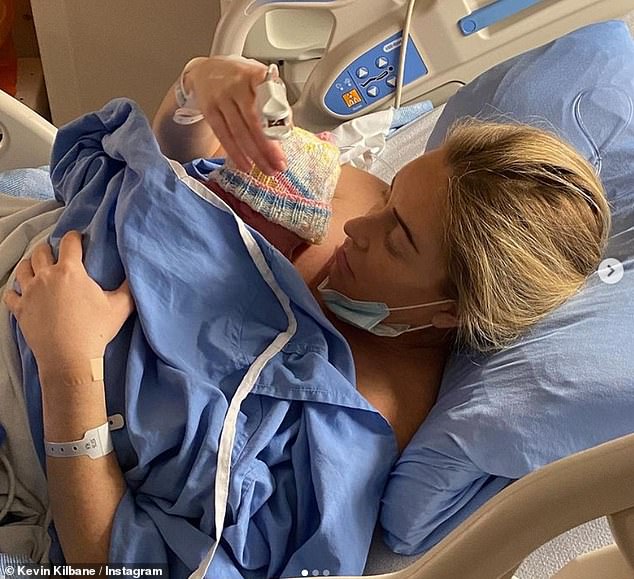 Bundle of joy: The couple, who welcomed daughter Olivia Mai in February, spent lockdown in Canada, with Brianne quitting her role on Dancing On Ice after a decade last year

The TV star admitted she had been considering leaving Dancing On Ice prior to the 2020 series because she had ‘a lot going on’ with her daughter Gracie, three, but now sees it as the best thing she ever did because she got to meet Kevin.

The pair, who confirmed they were expecting their first child together in September and also revealed at the time they had tied the knot, were faced with complications during Brianne’s pregnancy with Olivia.

The skater found being mobile during her pregnancy very difficult and had to go for several scans without Kevin.

She said: ‘I couldn’t lie down or walk. I was having tests and scans because the way she was laying she was all on my right side, so they couldn’t see her whole face or head and couldn’t measure her properly.

‘When you get some bad news or uncertainty you count on your husband to be there but I couldn’t because of Covid-19. It was so hard. All I wanted was a healthy baby and we weren’t getting answers.’ 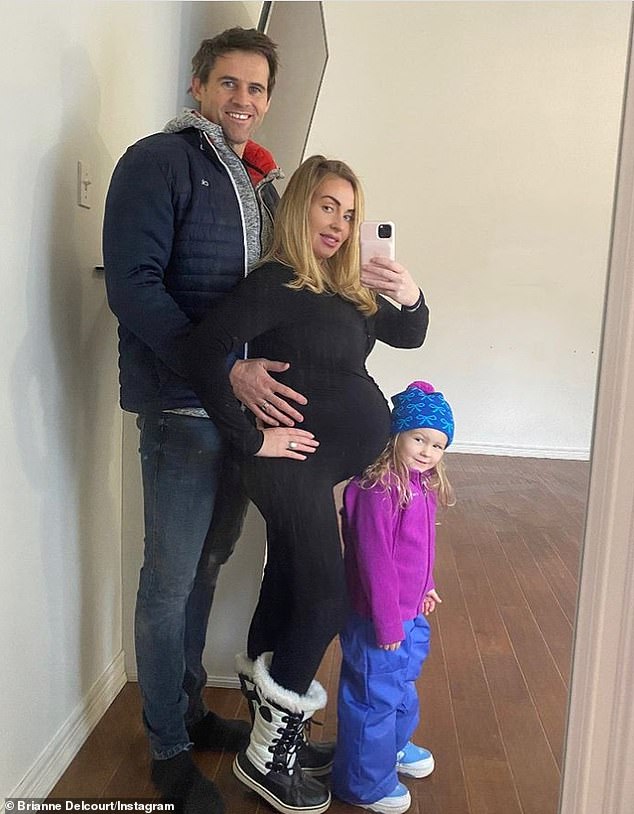 Kevin said: ‘We’ve both had to make huge sacrifices, including Bri quitting her job’ (pictured with Brianne’s daughter Gracie)

Kevin added that a ‘bright spot’ had showed up on Brianne’s initial scan and another that showed Olivia wasn’t growing as normal.

Kevin said it was a stressful time for the couple with Brianne hardly sleeping during her final month of pregnancy.

However the couple’s worries went away when they welcomed a healthy baby girl, with Brianne calling Kevin ‘the best dad’.

Brianne and Kevin married at Bonnie View Inn in Haliburton and were unable to have any guests with them from the UK due to Covid-19 safety regulations.

And so, their nuptials were attended only by Brianne’s daughter Gracie, her immediate family, and two friends. 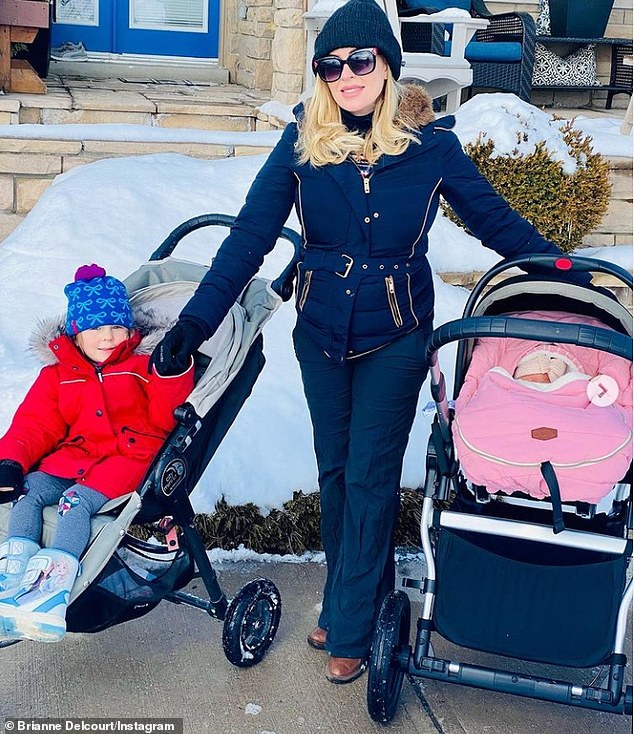 Family: Kevin added that it was a ‘big deal’ for Brianne to give up her career and move back to her native Canada and said he is ‘in awe’ of her

The pair were planning on having a second wedding ceremony in Ireland which Brianne said they will still do at some point.

The couple confirmed they had welcomed their first child together early last month, with their bundle of joy weighing 6lbs 11oz.

‘We love you so much and Gracie has never been more excited to get a baby sister and bestie for life.’ Cancelled: Brianne and Kevin announced they were expecting their first child together back in September, when they also tied the knot in Canada