Dancing On Ice star Denise Van Outen and her professional ice skating partner were pictured picking up coffees on their way to training on Friday.

The pair appeared in high spirits as they went to Costa, sporting matching blonde hairdos.

Denise, 46, was dressed casually in two-tone leggings and a black top worn under a cream padded jacket and Balenciaga trainers as she carried along a few big bags.

Pals: Dancing On Ice’s Denise Van Outen and professional skating partner Matt Evers grabbed a coffee ahead of training as he revealed he’s moved in with her ahead of Tier 2 lockdown 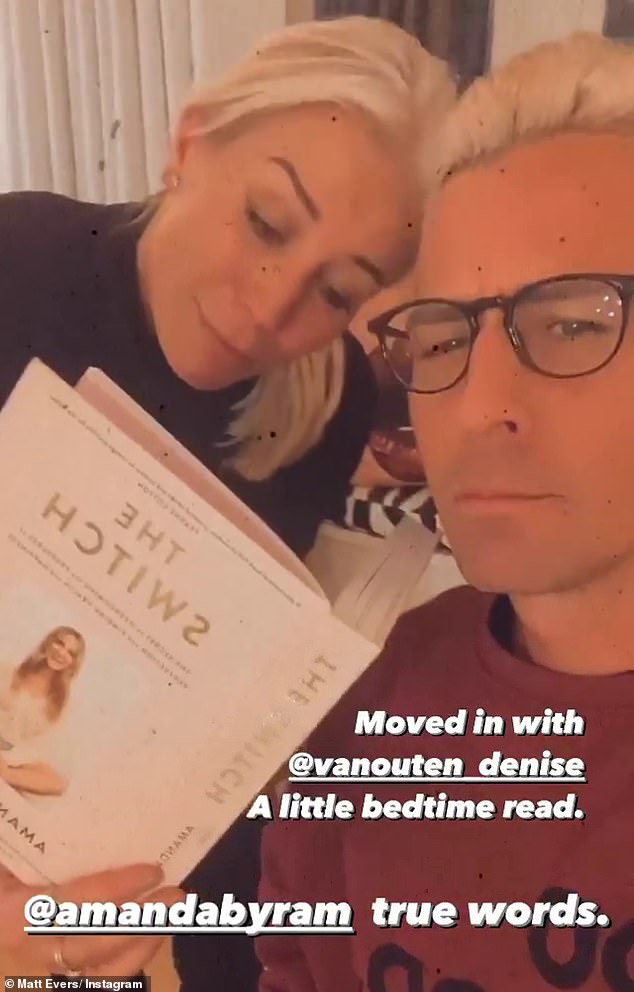 Housemates: The pair have been enjoying a little bedtime reading together, with Matt sharing the pictures on Instagram

Matt, 44, walked alongside her wearing a slogan ‘Happy’ top and baggy trousers.

Earlier, Matt had taken to Instagram to reveal he has moved in with Denise, her longterm love Eddie Boxshall and daughter Betsy ahead of the Tier 2 lockdown.

No doubt they were keen to quarantine together to reduce risk as the coronavirus pandemic rages on. 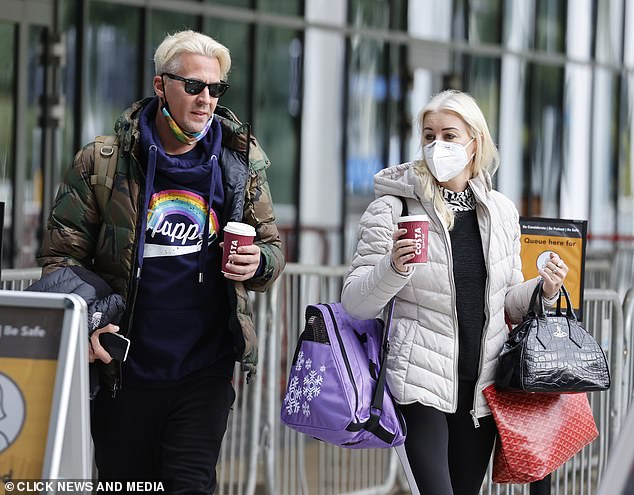 Chilled day out: Denise, 46, was dressed casually in two-tone leggings and a black top worn under a cream padded jacket as she carried along a few big bags 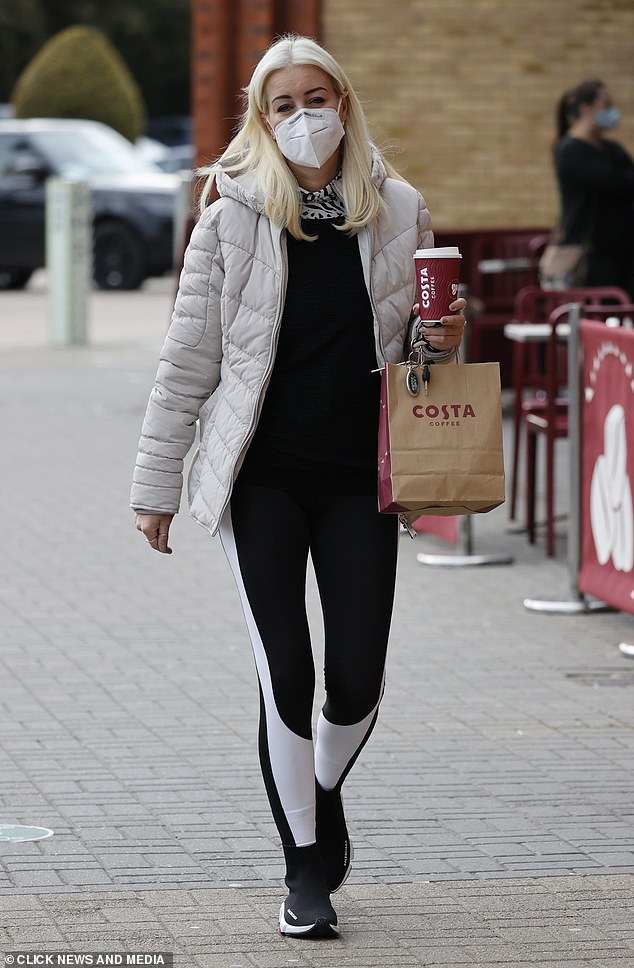 Warming up: Denise was sporting a face mask as she carried a warming cup of coffee in hand

Matt shared pictures of them reading Amanda Byram’s book The Switch together for a little bedtime reading.

And he also posed with some giant ostrich feathers on his head, writing: ‘Too much?’

Denise will join the likes of Myleene Klass, Rebekah Vardy and Jason Donovan on the ice in the new year as the celebrities battle it out on the ice.

Matt surprised Denise during an appearance at Proud Embankment in London on Saturday night, where the news was revealed as they shared the stage. 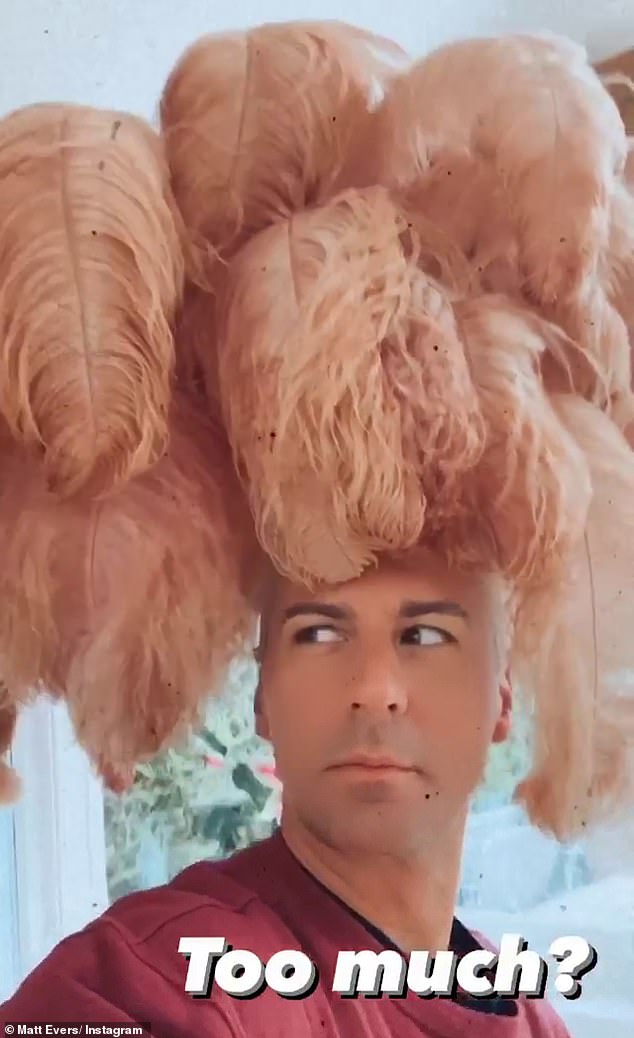 Larking around: Matt also posed with some giant ostrich feathers on his head, writing: ‘Too much?’

The news comes after it was reported that competitor Rebekah Vardy had hoped to be paired with the openly gay skater to avoid any possible cheating rumours.

Giving a taste of what’s to come, Denise looked sensational in a black sequinned bustier with a red waistcoat while Matt joined her in a red and black suit.

After the pair embraced – with an assurance from Denise that they’re both tested and coronavirus-free – Matt got down on one knee and asked: ‘Denise will you be my ice skating partner for Dancing On Ice 2020?’ 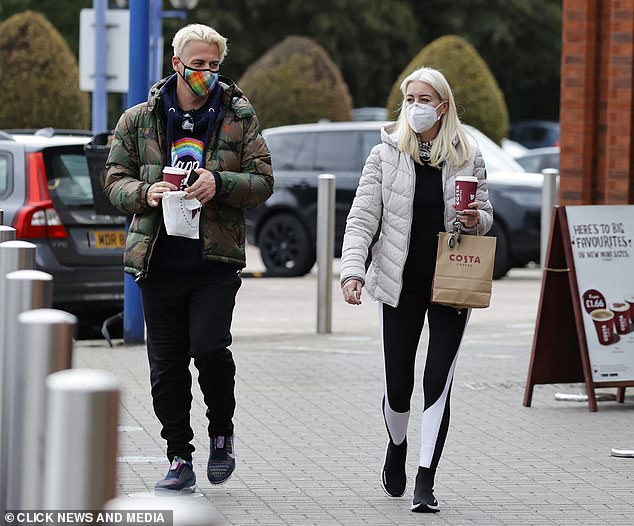 Oh dear: It had been reported that competitor Rebekah Vardy had hoped to be paired with the openly gay skater to avoid any possible cheating rumours 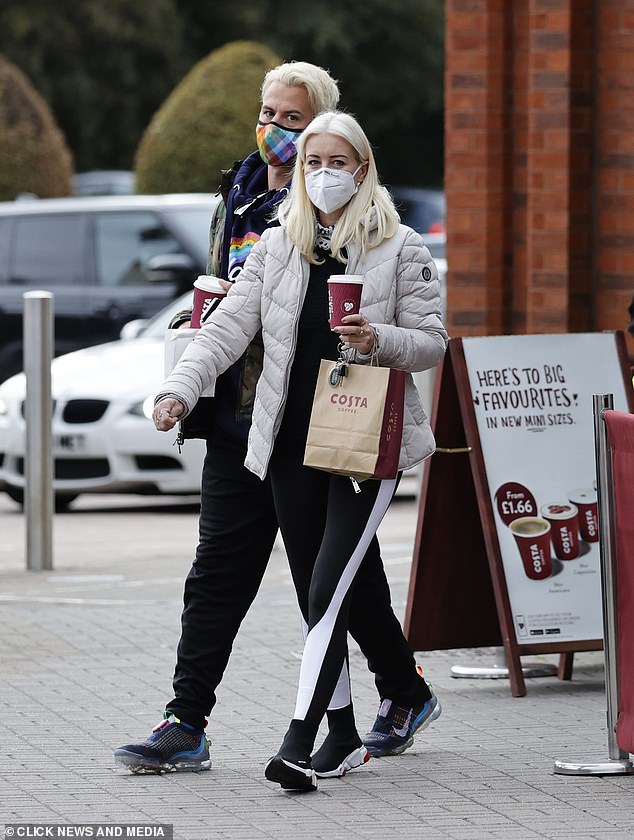 Close bond: But Denise and Matt have been good friends for some time so they are likely to get along well