Doctors are warning against the latest bogus TikTok health hack that involves taping your mouth shut before bed to lose weight.

Videos on TikTok extolling the benefits of mouth taping have amassed hundreds of thousands of views. One such benefit, according to mouth tape manufacturer Somnifix, is that forcing yourself to breathe through the nose only promotes fat loss.

But Dr Raj Dasgupta, a sleep specialist at the University of Southern California, said mouth taping at worst could lead to obstructed breathing and suffocation, explaining  that ‘if you have obstructive sleep apnea, yes, this can be very dangerous’.

Mouth taping is the latest TikTok trend to catch fire despite warnings from healthcare professionals.

Doctors recently warned against a similar viral trend called ‘vabbing,’ which involves smearing vaginal fluid behind the ears and neck, which proponents claim increases the chance of attracting men, by spreading their pheromones. 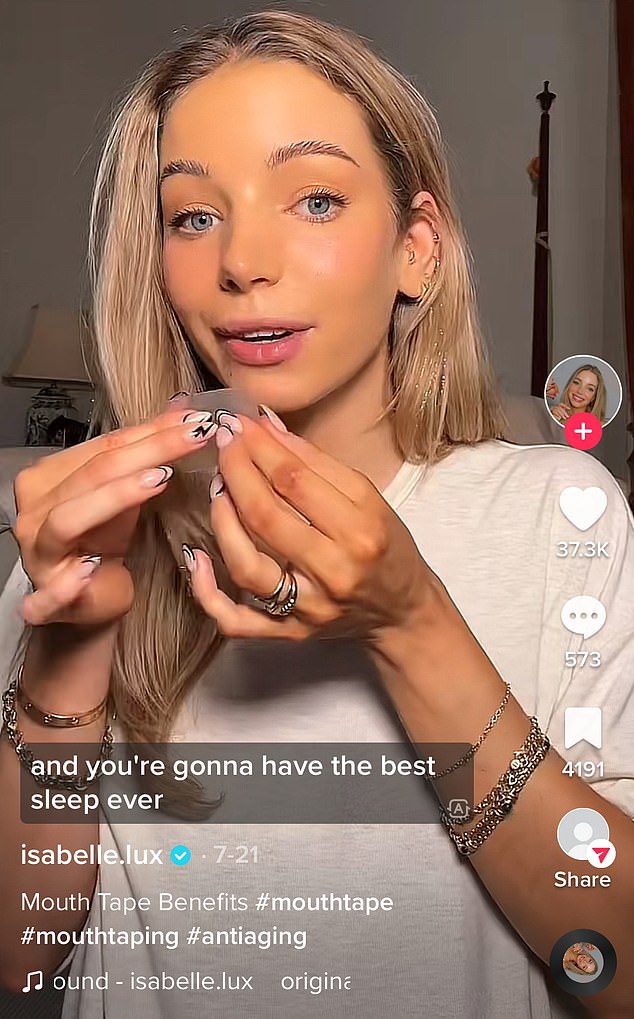 Some users also claim that the practice can help promote weight loss, citing evidence that breathing heartily through your nose is key to metabolizing fat particles in the body

Dr Dasgupta told CNBC: ‘There is limited evidence on the benefits of mouth taping and I would be very careful — and even talk to your health care provider before attempting it.’

Some mouth tape users report having more energy in the hours after waking as a result of their improved sleep quality.

Experts fear that taking part in the trend can harm the 22million Americans who suffer from sleep apnea – a condition where breathing repeatedly stops and starts at night.

It can occur when the relaxation of a person’s throat muscles while sleeping obstructs airways, or when the brain does not properly send signals to the body to continue breathing.

Experts warn that obstructing the mouth could make sleep apnea symptoms even worse.

Doctors also advise against taping your mouth if your nasal passages are not completely clear.

What is sleep apnea?

Obstructive sleep apnea (OSA) occurs when the walls of a person’s throat relax and narrow during sleep, blocking their airways.

This interrupts normal breathing, with symptoms including loud snoring, noisy and labored breathing, and repeated episodes when breathing is interrupted by gasping and snorting.

Roughly 22 million Americans have it.

During an episode, the lack of oxygen triggers a sufferer’s brain to pull them out of deep sleep so their airways reopen.

These repeated sleep interruptions can make the person very tired, with them often being unaware of what the problem is.

Risks for OSA include:

Treatment includes lifestyle changes, such as loosing weight, if necessary, and avoiding alcohol.

In addition, continuous positive airway pressure (CPAP) devices prevent the airway closing by delivering a continuous supply of compressed air through a mask.

A mandibular advancement device (MAD) can also be used, which is like a gum-shield that holds the jaw and tongue forward to increase the space at the back of the throat.

Dr Megan Acho, a pulmonologist and sleep specialist at the University of Michigan Health said: ‘Importantly, if you have nasal congestion or a deviated nasal septum, you could potentially limit airflow if you tape your mouth.

‘This is one reason why we would definitely recommend avoiding mouth taping in people with known nasal disease and in children.’

Mouth taping is not a new practice, but it has exploded in popularity on TikTok where millions of users have posted about their experiences.

Some videos have as many as 500,000 likes and the tag ‘mouth taping’ has been viewed more than 43 million times.

While doctors may warn against taping the mouth – there are some real benefits.

One influencer who tapes her mouth shut before bed rattled off a series of issues linked to mouth breathing such as cavities, gum disease, bad breath, brain fog, and sore throat.

Research also finds that breathing through the nose helps the body perform at its optimum level.

People who mouth-breathe are not absorbing enough oxygen. Without sufficient oxygen, our sleep quality and energy levels plummet.

It is a crucial part of meditation because it activates the parasympathetic nervous system which dilates blood vessels and decreases the heart rate, reducing overall blood pressure.

Oxygen helps break down fat molecules which are metabolized to become energy to help the body function. Evidence is limited, though, as studies have been relatively small.

In a 2018 study conducted in Korea, 38 people were asked to do different deep breathing exercises.

Some were asked to perform diaphragmatic breathing – a process where a person slowly inhales and exhales to relax themselves.

Those who did it through the nose, sometimes called belly breathing, had a higher resting metabolic rate than others.

This can help a person lose weight, cut fat and reduce their risk of heart disease, diabetes and other conditions.

Evidence that the practice works is mostly anecdotal, though.