Victorian state premier Daniel Andrews will deliver bad news at a COVID-19 press conference if he is wearing a suit, according to conspiracy theories.

Some social media users claim they can tell if the latest coronavirus updates will be good or bad based on Mr Andrew’s attire or even the time of the press conference.

Mr Andrews addresses the public daily to provide the latest number of coronavirus cases in the state.

Victorian state premier Daniel Andrews will deliver bad news at a COVID-19 press conference if he is wearing a suit, according to conspiracy theories 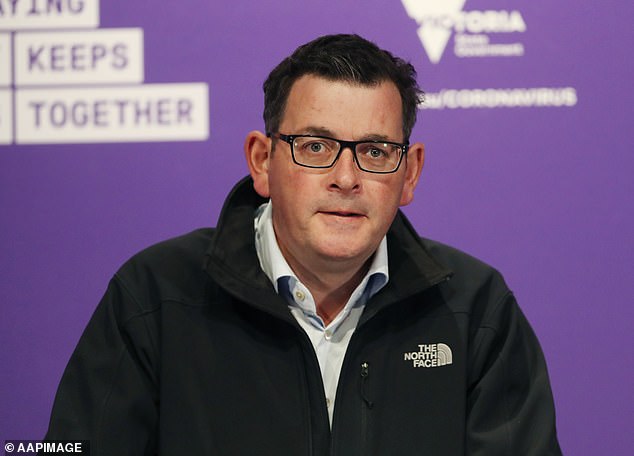 ‘I’ve cracked the code…’ the post proudly read on Twitter, before explaining what he believes the difference between the suit and jacket meant.

Another person commented: ‘So that means if he wears a tie we are stuffed.’

Others have stepped in to defend Mr Andrews and shoot down the conspiracy.

‘The North Face comes out on weekends,’ one person said.

Another one added: ‘I think we have bigger issues than the fashion rotations of the Premier.’

One person chose to make light of the situation with a tongue-in-cheek response.

‘If he turns up in his pyjamas… I think it means we are LOCKED DOWN for real… as in this is NOT a drill.’

Other conspiracy theorists claim the time of day is an indication of the type of news Mr Andrews will deliver to the public.

When the second wave was beginning in Victoria, Mr Andrews moved his daily media updates to the afternoon instead of the regular 11am timeslot.

‘We’ve been trying to crack the code at work for a few weeks,’ one person commented.

‘Before lunch … Bad ish news. After lunch s*** gets serious and we fear the worst. Now this ads [sic] another layer to it.’

Another one added: ‘Any presser after 2pm. Ain’t good news.’

Two men and a woman, aged in their 90s, with the virus have died, taking the state’s death toll to 38, Premier Daniel Andrews said on Sunday. The national toll is now 122.

There are 2837 active cases across the state, with 130 people in hospital, of those 28 are in intensive care.

Thirty-six of the new cases are linked to outbreaks and 327 cases are under investigation.

Mr Andrews announced face masks will be mandatory for people who leave their homes in metropolitan Melbourne and in the Mitchell Shire from 11.59pm on Wednesday, with fines of $200 for non-compliance.