A grumpy Daniel Andrews has batted away reporters’ questions about a Victorian corruption watchdog investigation amid calls for him to follow Gladys Berejiklian’s example and stand down as a result.

The state Premier was grilled by journalists in Melbourne on Wednesday morning over a corruption probe into the relationship between the United Firefighters Union and the Victorian government.

It has been reported that Victoria’s corruption watchdog IBAC will examine the Premier’s conduct as part of its investigation.

An investigation into Victoria’s fire services has been ongoing since 2019, probing allegations of corruption and financial mismanagement.

Between 2014 and 2019 the firefighters’ union leader Peter Marshall tried to influence an industrial deal and a reform package to benefit his members.

IBAC has seized mobile phones, laptops and dozens of USBs belonging to the union or Mr Marshall, according to The Age.

At a news conference on Wednesday, Mr Andrews fended off a barrage of journalists’ questions by repeatedly referring them to IBAC.

‘If you want to know what IBAC is doing and who they’re talking to… you must go talk to them,’ he said.

Daily Mail Australia is not suggesting any wrongdoing by Mr Andrews.

The Opposition has called for Mr Andrews to follow the example of former NSW premier Gladys Berejiklian, who resigned on Friday after she was named as a person of interest in a corruption investigation, and not wait for a finding.

‘The former premier of NSW resigned because she was under investigation by ICAC,’ said Liberal MP Tim Smith.

‘The premier of Victoria is under investigation by our anti-corruption commission IBAC, why hasn’t the premier stood down?’ 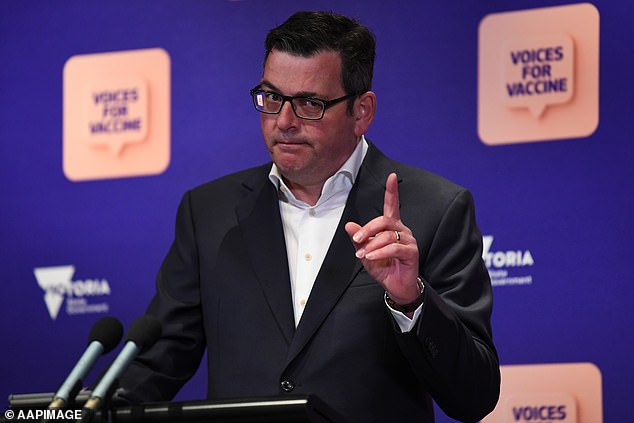