Daniel Andrews has been fined $400 for breaching his own coronavirus rules by not wearing a mask two days in a row this week.

The Victoria Premier failed to wear a mask outside Parliament on Wednesday and Thursday and was fined $200 for each breach.

Police investigated after footage taken by journalists showed him walking though the car park after getting out of his chauffeur-driven car without a mask on Thursday.

The footage, which emerged as the state reported a record 1,838 new infections, angered Melbourne residents.

The Premier said sorry on Friday and promised if police didn’t fine him, he would donate $200 to charity.

‘I am aware that as I approached two press conferences at the back of parliament house this week I removed my mask after leaving the car, before I walked to the back doors,’ Mr Andrews said.

‘I expect Victoria Police to assess this and if they choose to issue a fine, of course I will pay it.

‘If they do not issue a fine I will donate the same value to a charity working to support people in this pandemic because whilst this was an oversight, oversights matter.

‘Everyone needs to follow the rules and I am sorry it occurred’. 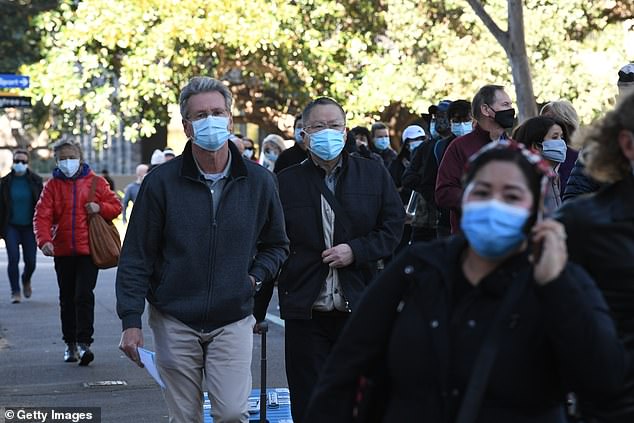 ‘As the incident is being reviewed by investigators we will not be providing further comment at this stage,’ a spokesperson said.

Video filmed by Seven News journalist Paul Dowsley showed Mr Andrews walking up to a microphone stand with his briefcase and passing a small group of media.

The footage sparked outrage with talkback radio hosts and social media users condemning the Premier for his missing face-covering.

3AW radio host Neil Mitchell took to the airwaves to demand Mr Andrews pay his own government a $200 fine.

‘Premier, if you’re going to lock us up for lapses and fine businesses when they’re trying to do the right thing, well you’ve got to pay the price yourself.

‘Maybe he could just apologise at the press conference, say he’s made a mistake … and give $200 to charity. It was an oversight, it’s not a huge issue, but it’s a symbol.’

‘What lawful reason could he possibly have for walking into that building without a mask,’ one person wrote. ‘I’m dead serious.’

Another person added: ‘I’ve been waiting for somebody to call him out on this; so thank you. and YES, ABSOLUTELY he should receive a penalty notice for breaching his own mandate!’ 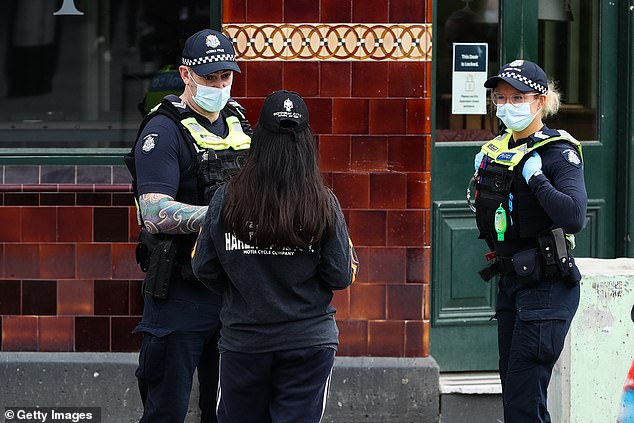 Melbourne residents are required to wear a face mask at all indoor and outdoor public places (pictured, officers speak to a resident in Melbourne)

Under the state government’s Covid rules, anyone over 12 years is required to mask up whenever they leave their home.

They must wear a mask in all public indoor and outdoor settings. Only those who have a medical exemption are not required to wear the face mask.

Nearly 39,000 fines have been handed out by police to residents breaching Covid-19 health orders between March 2020 and June 2021.

Only $5.7million of the $60million worth of fines have been paid.

Individuals face on-the-spot fines of up to $1,817 while businesses can pay as much as $10,904 if they breach public health orders.

Residents risk $5,452 in fines if they break indoor and outdoor gathering caps.

Victoria recorded 1,838 new Covid-19 cases and five deaths with the growing outbreak blamed on unvaccinated residents as the state anxiously waits for restrictions to ease.

The new cases marks a pandemic record and raises the total number of active infections in the state to 16,823.

Acting chief health officer Professor Ben Cowie said he was disappointed by the number of new infections and claimed the spike could have been avoided if the majority had been vaccinated.

‘This is unfortunate because it’s despite the fact that 87 per cent of the cases were eligible for vaccination at the time they were diagnosed with Covid-19,’ he said. 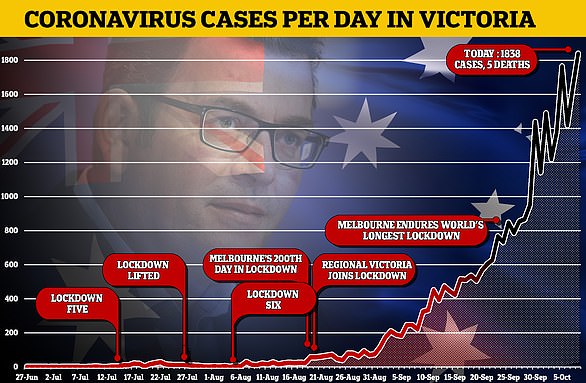 Victoria recorded 1,838 more Covid-19 cases on Friday with the outbreak worsening just weeks before the state is scheduled to begin easing restrictions

Despite the rise in case numbers, the percentage requiring hospital treatment was falling, standing at 3.35 per cent on Friday compared to 6.25 per cent a month ago.

Five more deaths with Covid were reported on Friday, taking the toll from the current outbreak to 70.

By comparison, NSW positive rate at the height of its Delta outbreak was 1.1 per cent.

Of the new cases in the week to Tuesday, 79 per cent were unvaccinated.