Victorian Premier Daniel Andrews is one step closer to passing his controversial pandemic bill after securing the crucial vote of an independent MP.

Transport Matters MP Rod Barton will vote in favour of the Pandemic Management Bill as long as Mr Andrews agrees to have his public health orders reviewed by a parliamentary committee, The Herald Sun reported.

They agreed the committee will need to be chaired by a crossbench or Opposition MP to make sure it is independent from the state’s ruling party.

The bill would give the premier the ability to declare a pandemic and enforce lockdown restrictions – powers that so far only lie with the chief health officer.

Transport Infrastructure Minister Jacinta Allan on Monday said the emergence of the new hyper-contagious Omicron strain justified the need for the new powers. 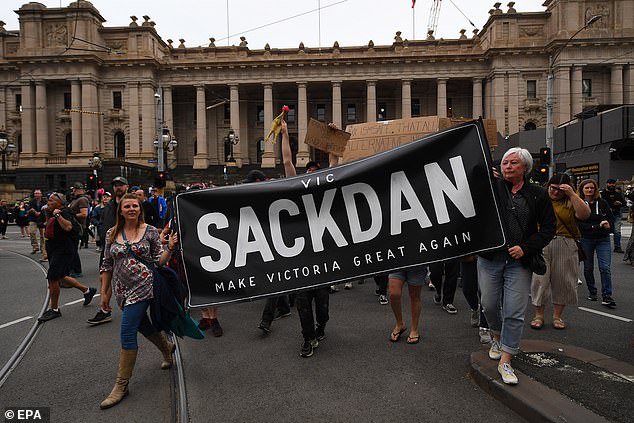 Protesters march against the controversial bill in Melbourne on November 9. Transport Matters MP Rod Barton will vote in favour of the Pandemic Management Bill as long as Mr Andrews agrees to have his new powers reviewed by a committee

‘Negotiations are continuing and are likely to continue for the next couple of days,’ Ms Allan said.

‘What we’ve seen over the last 24 to 48 hours with the emergence of the Omicron strain of the virus is that more than ever, we need this modern pandemic framework to keep Victorians safe.’

‘I’ve been forced into a position to have to deal with this at this late stage,’ Mr Barton said.

At the weekend, the Victorian government announced all international arrivals into the state will have to isolate for 72 hours, while those who have visited one of nine southern African countries of concern will have to undergo 14 days of hotel quarantine.

Ms Allan said the government would not have been able to impose the new rules were it not for the state of emergency currently in place.

‘All of this is going to be an important framework for some time to come,’ she said. ‘Because the pandemic isn’t over. We would like it to be over but it isn’t.’

Opposition Leader Matthew Guy described the Omicron variant as the ‘fourteenth strain of the coronavirus in 18 months’ and accused the government of ‘dabbling in the politics of fear’. 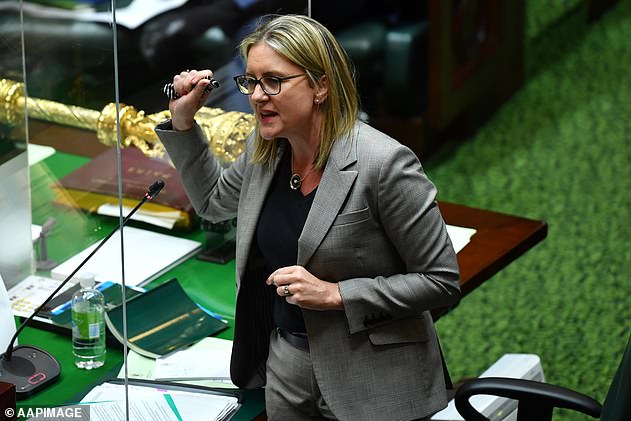 ‘The government constantly talking about states of emergency, pandemic bills, that is a thing of the past, that should not be the way we approach a Covid future,’ he said.

Mr Guy has vowed to repeal the pandemic legislation if elected in November 2022.

The bill was expected to pass parliament last sitting week with the support of three crossbenchers in the upper house but former Labor minister Adem Somyurek announced he would return from a self-imposed absence to vote against it in its current form.

Mr Somyurek’s return means the government needs the support of one additional crossbencher to pass the legislation before the state of emergency expires.