The Danish royals donned their finery tonight for a glittering gala concert in Copenhagen – just hours after attending a service marking the 500th anniversary of the Reformation movement.

Queen Margrethe II, 77, wrapped up against the autumn chill in an opulent fur shawl and fuscia gown, as she made a glamorous entrance.

But the flamboyant monarch was in danger of being outshined by her equally glamorous daughters-in-law, Princesses Mary and Marie, who both opted for form-fitting cocktail dresses for the occasion.

Crown Princess Mary, 45, showed off her sensational figure in a sparkling navy number as she took her husband Crown Prince Frederik’s arm on the red carpet.

Queen Margrethe II, 77, wrapped up against the autumn chill in an opulent fur shawl and fuscia gown, as she made a glamorous entrance 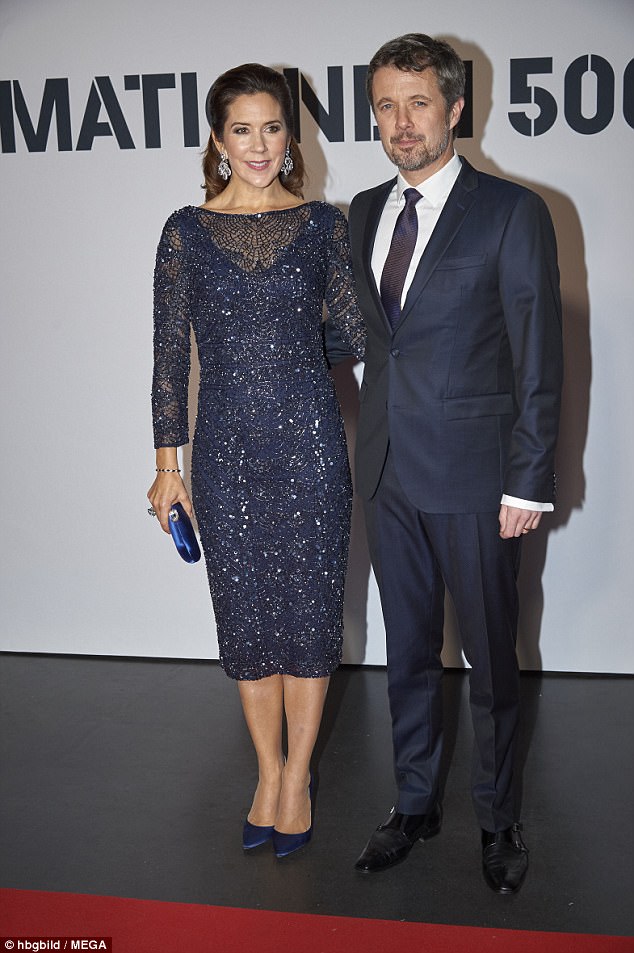 True blue: Crown Princess Mary, 45, showed off her sensational figure in a a sparkling navy number as she took her husband Crown Prince Frederik’s arm on the red carpet

Meanwhile her sister-in-law Princess Marie, 41, was colour-coordinated with husband Prince Joaquim, with the dapper pair both opting for navy.

Earlier, the family came out in force to mark the 500th anniversary of Martin Luther’s Reformation movement in Copenhagen.

Margrethe led the arrivals on Tuesday morning at Folketinget (Danish Parliament) at Christiansborg palace, closely followed by her sons Princes Frederik and Joachim.

Tellingly, there was no sign of Prince Consort Henrik, who the royal household recently announced is suffering from dementia.

The mother-of-four’s dress was embellished with shimmery beading, and Mary completed her look with an elegant box clutch and satin heels 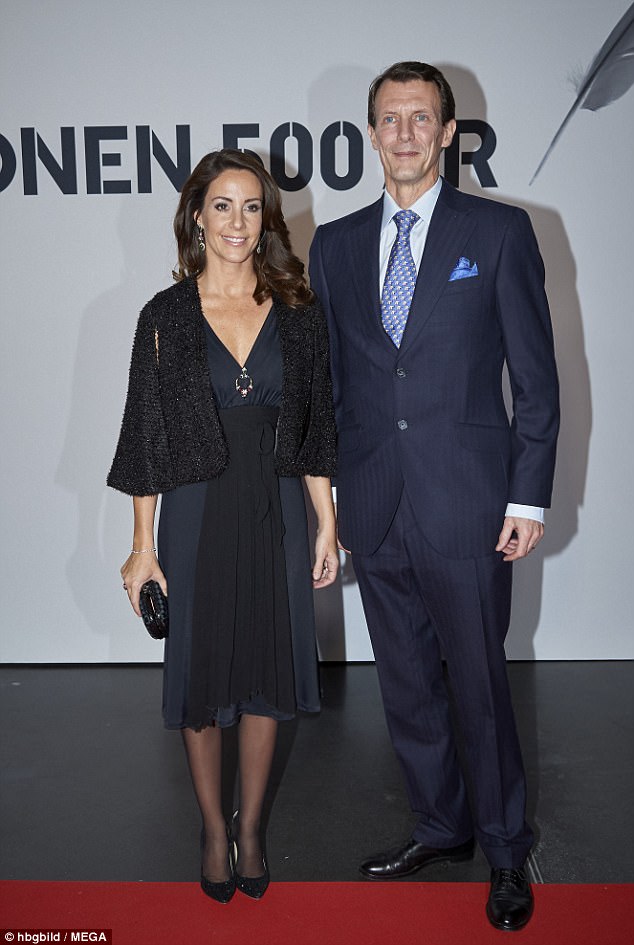 Princess Marie, 41, was colour-coordinated with husband Prince Joaquim, with the dapper pair both opting for navy. Marie wore an elegant chiffon dress with draping detail along the front 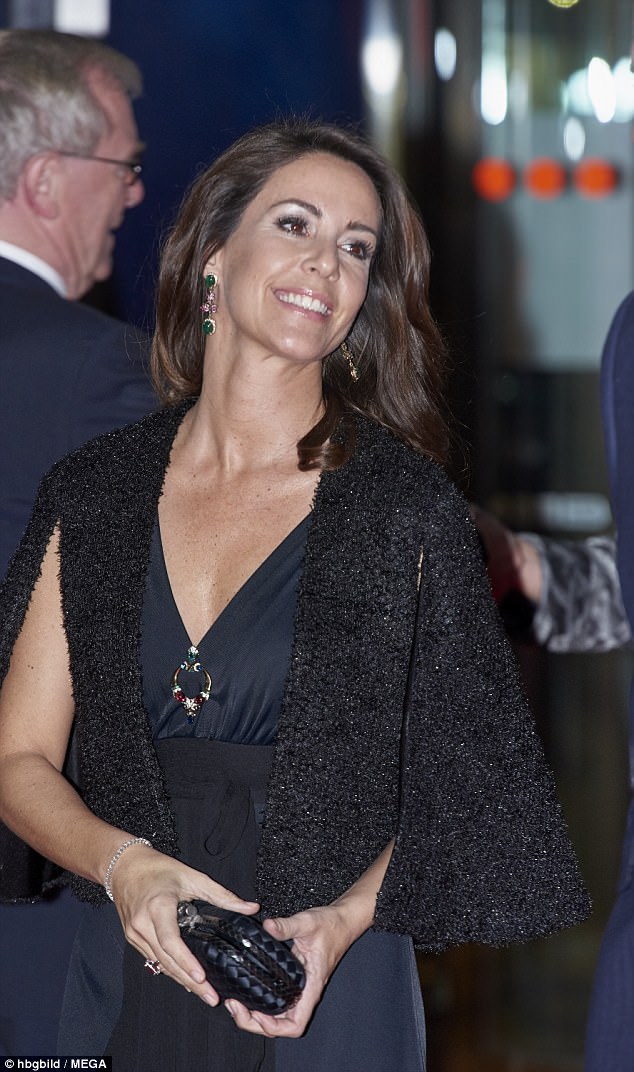 Time to shine: The French-born mother-of-two added a shimmering black shawl to wrap up against the cold, completing her look with a colourful brooch and satin box clutch

Making an equally stylish entrance at Folketinget were Frederik and Joaquim’s wives, Mary and Marie.

Australian-born Mary looked chic in a belted cream jacket teamed with a black A-line skirt and pointed heels, which she finished off with leather gloves and oversized pearl earrings.

The mother-of-four was working as a marketing manager at an advertisement company when she met Frederik in a pub in Sydney during the 2000 Sydney Olympic Games. 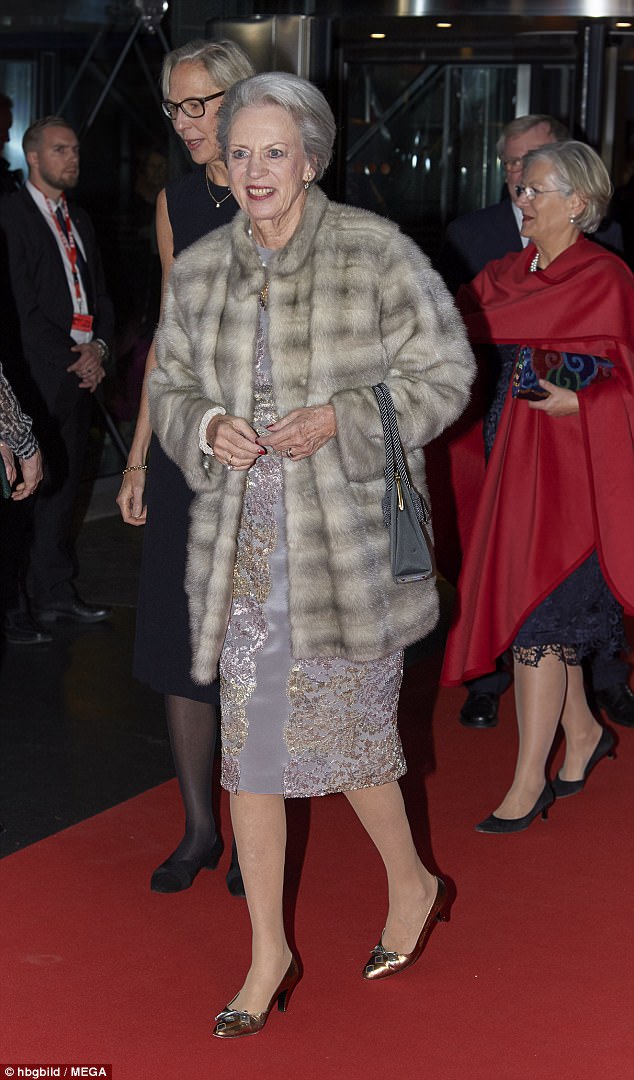 Queen Margrethe’s sister, Princesse Benedikte of Denmark, also donned her fur for the gala concert – thrown on over a sparkling silver dress and metallic shoes 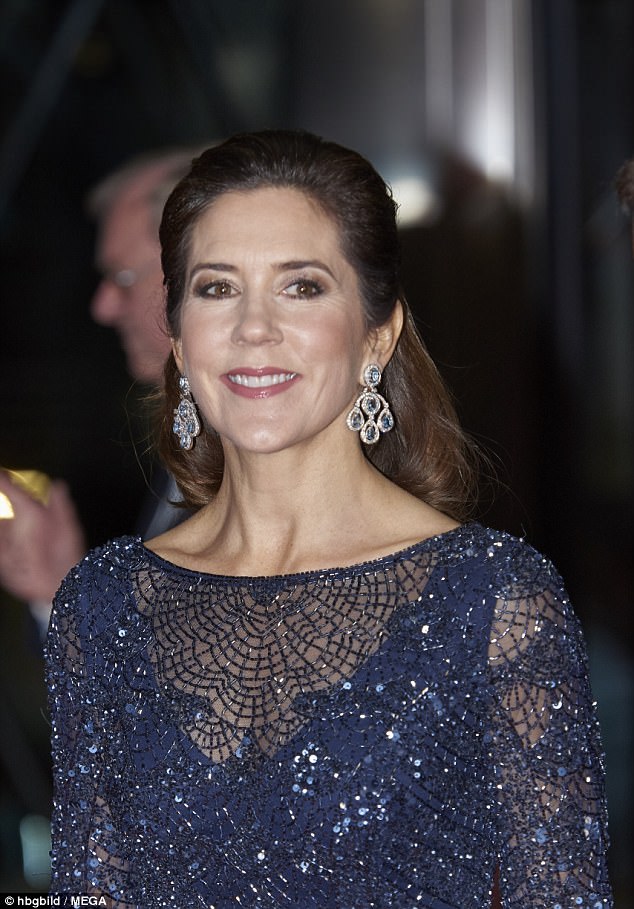 Stunning Crown Princess Mary looked far younger than her 45 years. She added a pair of statement diamond earrings to her dazzling ensemble

Despite being spotted together several times in both Denmark and Australia, and Mary moving to Europe in 2001, it was not until April 2003 that Queen Margrethe publicly acknowledged their relationship.

Her lookalike sister-in-law, Marie, also opted for dark colours on Tuesday, teaming her black skirt suit with a teal dress and elaborate headpiece.

Marie, who is mother to Prince Henrik and Princess Athena, swept her hair into a loose chignon and added a touch of glamour with patent heels and sequin embellishment on her skirt.

Denmark is this year hosting a series of celebrations marking the 500th anniversary of the Reformation.

In London, Westminster Abbey also hosted a service to mark the 500th Anniversary of the 95 Theses and the beginning of the Reformation led by the Dean of Westminster, the Reverend Dr John Hall. 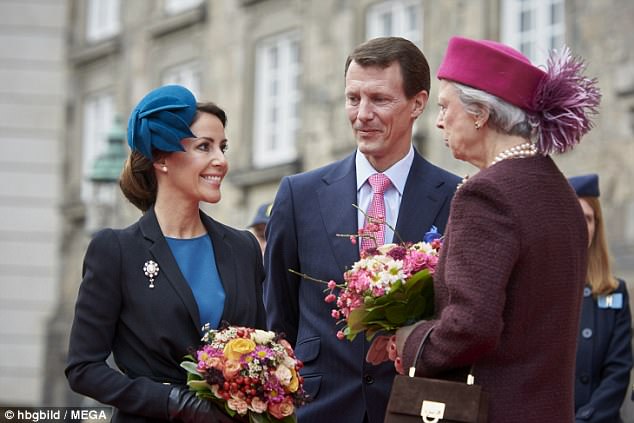 Prior engagement: The Danish royals talk among themselves ahead of the service at Christiansborg palace on Tuesday morning. Prince Henrik, who has dementia, did not join them

In September, the Danish monarchy released a statement regarding Prince Henrik’s dementia just weeks after he said he didn’t want to be buried with his ‘disrespectful’ wife Margrethe.

The cruel disease is said to have advanced quicker than expected and the 83-year-old’s royal engagements will be downgraded as a result of the diagnosis.

A palace statement read: ‘Following a longer course of investigation, and most recently, a series of examinations conducted during late summer, a team of specialists at Rigshospitalet has now concluded that His Royal Highness Prince Henrik suffers from dementia.

The extent of the cognitive failure is, according to Rigshospitalet, greater than expected considering the age of the prince.’

What was the Reformation?

Martin Luther, a German, started the Protestant Reformation in 1517 when he wrote 95 theses criticising the Catholic Church for corruption in Rome, including the buying of ecclesiastical privileges, nepotism, usury and the selling of indulgences, and nailed them on the church door in the town of Wittenberg.

Pope Leo X excommunicated him, but the church could not stop Luther’s teachings from spreading throughout northern Europe or the world.

The Reformation led to a violent, often political schism throughout Europe and Christianity, prompting among other things the 30 Years’ War, the destruction of English monasteries, and the burning of numerous ‘heretics’ on both sides.

Catholics persecuted Protestants and vice-versa for hundreds of years.

St. Ignatius Loyola founded the Jesuit order in 1537, 20 years after Luther’s protest, in part as a response to the heresies being promoted.

In the past Pope Francis, himself a Jesuit, spoke harshly of the Protestant reformers. But recently he has had only words of praise for Luther.

He recently called the German theologian a reformer of his time who rightly criticized a church that was ‘no model to imitate.’

‘There was corruption in the church, worldliness, attachment to money and power,’ Francis said this summer.