A Malaysian court has today handed a Danish man a one-week jail term for breaking a law against ‘fake news’, the first person to be punished under controversial legislation.

The law, passed in early April, makes the deliberate dissemination of false information punishable by up to six years in jail and a hefty fine. It has sparked outrage from rights groups, which believe it is aimed at cracking down on dissent.

Salah Salem Saleh Sulaiman, a 46-year-old of Yemeni descent, admitted making and posting on YouTube a video accusing emergency services of responding slowly after a Palestinian Hamas member was gunned down in Kuala Lumpur.

Danish national Salah Salem Saleh Sulaiman, second from right, escorted by police, arrives at a court house in Kuala Lumpur, Malaysia. He was sentenced to a week in jail after he pleaded guilty to maliciously publishing fake news, the first person to be punished under the controversial law

Fadi al-Batsh, said to be a rocket-making expert, was on his way to dawn prayers on April 21 when he was assassinated by motorbike-riding gunmen, a killing his family have blamed on Israel’s spy agency. The Jewish state has denied it was behind the murder.

The Dane, who did not have a lawyer and was wearing white robes and a green skullcap during a court appearance in Kuala Lumpur, said he was not aware of Malaysia’s laws. 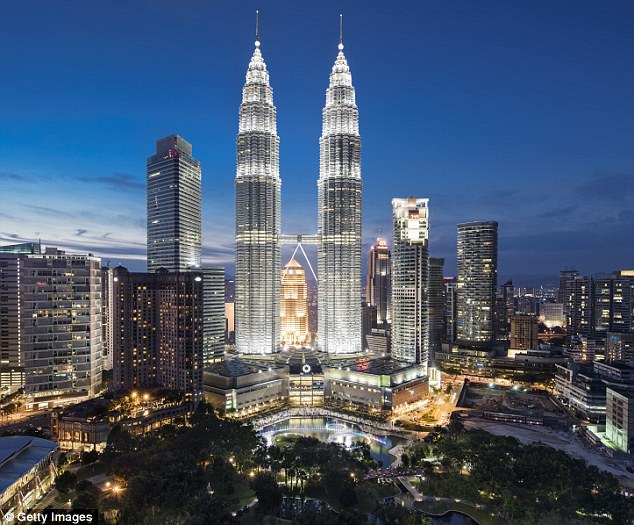 Fadi al-Batsh was killed while on his way to dawn prayers in Kuala Lumpur, Malaysia

‘I agree I did a mistake because I didn’t ask what is the law of this country,’ he said, speaking in English, his hands trembling.

A clip of the video played in court, which lasted almost two minutes, showed him speaking in Arabic and complaining about what he claimed was the slow response of the police and ambulance services after the shooting.

However, authorities have disputed his claims.

Judge Zaman Mohamad Noor sentenced him to a week in jail, including time already served since his April 23 arrest, and fined him 10,000 ringgit (£1,856). If he cannot pay the fine, then he will have to serve another month in jail, the judge said.

The Dane, who had been on a 10-day visit to Malaysia when the crime was committed, said he did not have enough money to pay the fine. He said he had three wives and six children.

The law banning fake news has sparked concern the government is seeking to crack down on criticism, particularly with a general election looming on May 9.

Malaysian legal reform group Lawyers for Liberty said they were ‘surprised and disappointed’ that Monday’s prosecution went ahead even though the law was being challenged in court.

‘Bringing criminal charges against a person is a serious matter,’ said N. Surendran, an adviser to the group, in a statement.

‘Surely where the legality of the law has been a question of national debate, enforcement should await the authoritative decision of the courts.’