Danny Cipriani has looked back over the ‘challenging’ year he faced in 2020, which included the loss of a baby and the death of his ex-girlfriend Caroline Flack.

The rugby ace, 33, was left devastated when Love Island host Caroline – who he briefly dated in 2019 before they went on to become friends – took her own life at her north-east London home on February 15 aged 40.

And as he grappled with his ‘intense’ grief in the weeks and months that followed, Danny faced another setback with the heartbreaking news that he and his fiancée Victoria, 40, had lost the baby they were expecting.

Challenging year: Danny Cipriani has looked back over the ‘challenging’ year he experienced in 2020, which included the loss of his baby with fiancée Victoria

With the COVID-19 pandemic and resulting global lockdowns from March only serving to compound the trauma, the sportsman has admitted he struggled to cope.

‘It was a challenging year,’ he told Sportsmail in an exclusive interview. ‘I was grieving for my friend and we had a week off, so I went to LA, then COVID hit.

‘I think grievance happens in different stages. Mine was very intense. At different times, it comes and goes. There are moments when you remember that person. You have to remember the happy times and I don’t think that ever disappears.’ 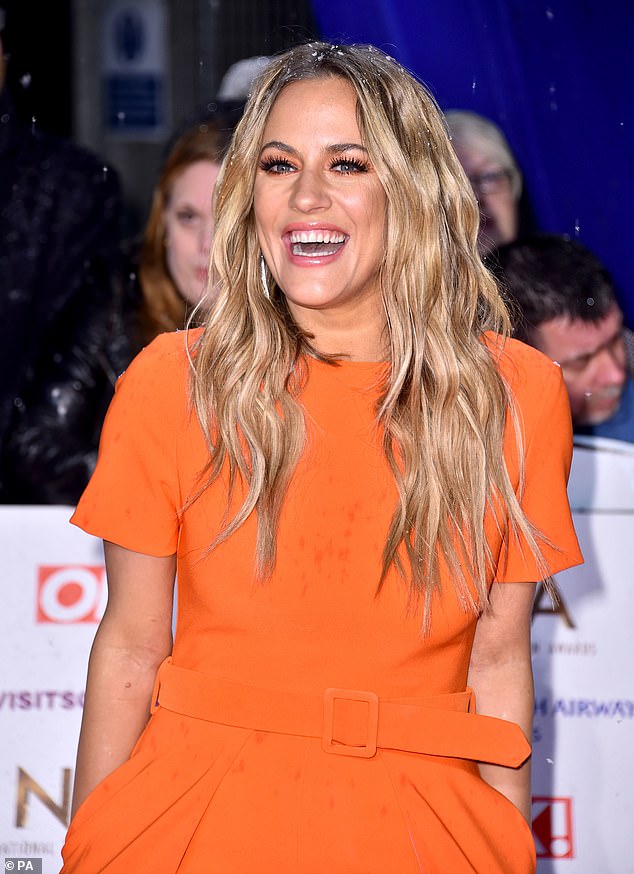 Tragic: Months before the loss of his baby, his ex-girlfriend and close friend Caroline Flack took her own life at her north-east London home on February 15 aged 40. Pictured in 2019

And while dealing with Caroline’s passing and the unceremonious halting of the rugby season, Danny – who last month stepped back from his playing duties for Gloucester – was hit with further tragic news.

He recalled: ‘During that period, when the season was stopped, we also lost a baby. I think, as the male, I had a delayed on-set of grief about that.

‘You try to pick your partner up and you don’t realise at the time the effect it has on you. We went through that process together and we are really strong now. We’re in a really good position to start trying again and we’re happy about that.’

Indeed, the star appears to be in the throes of joy with his partner Victoria after announcing their engagement via an Instagram comment in August last year.

Sharing the news, Victoria posted a snap of her in bed with Danny with him kissing her hand. She wrote ‘Mrs Cipriani to be’ alongside a ring emoji. 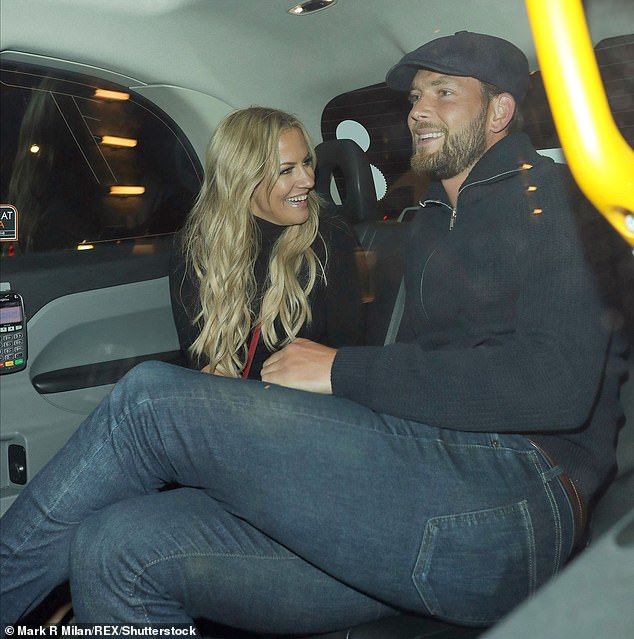 Beau: Caroline tragically took her own life a day after learning the CPS would be pursuing a case of assault against her following a row with boyfriend Lewis Burton. Pictured in 2019

As well as changing her surname to his on Instagram Danny revealed he planned to marry Victoria as soon as possible – becoming a stepfather to her two children, daughter Jade, 24, and son Kameron, 14.

The sportsman will also take on the role of step-grandfather after Victoria’s daughter Jade became a mother four years ago.

Caroline tragically took her own life at her home in Stoke Newington, a day after learning the CPS would be pursuing a case of assault against her following a row with boyfriend Lewis Burton at her home the previous December.

Less than two weeks after Caroline’s shocking death, Danny took to Instagram to share the last messages he had exchanged with the popular TV personality.

In the messages, he revealed that she called him ‘black dot’ and that he spoke to her about ‘working in an industry that doesn’t suit him’ and she spoke about ‘the court case coming up’. 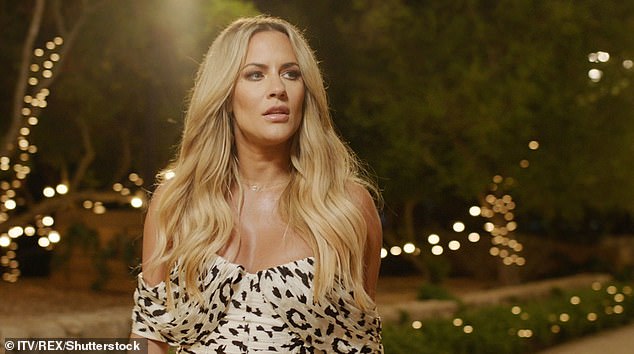 Remembering the happy times: Speaking of how he dealt with his ‘intense’ grief, Danny said, ‘You have to remember the happy times and I don’t think that ever disappears’

He revealed Caroline called him ‘black dot’ because he had changed his WhatsApp profile to a black dot because he felt he couldn’t trust people in his contacts.

He penned: ‘Black dot. Before I start. This is my grieving process. Which is talking. A lot. Which my friends and family and teammates have had to take this last 10 days because I’m grieving.

‘And I’m grieving hard. Hence I’m talking a lot. I’m not sure I’d be strong enough if I didn’t understand or see myself in her. Pain is pain. It doesn’t matter if you’ve lost a cat. Or been called a name. No ones pain is worse or less.

‘Because it is individual to them and how they take it. So… Black dot. If you judge the first pic you see a black dot. But i didn’t really know what she meant when she called me black dot. Until her best friend told me on Sunday last week. 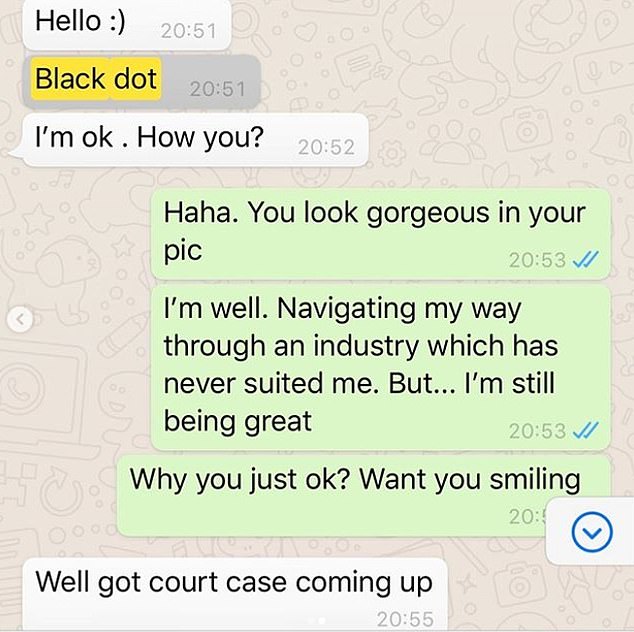 Support: Less than two weeks after Caroline’s death, Danny posted these messages on social media as he shared a glimpse into how much he and the late star had supported one another 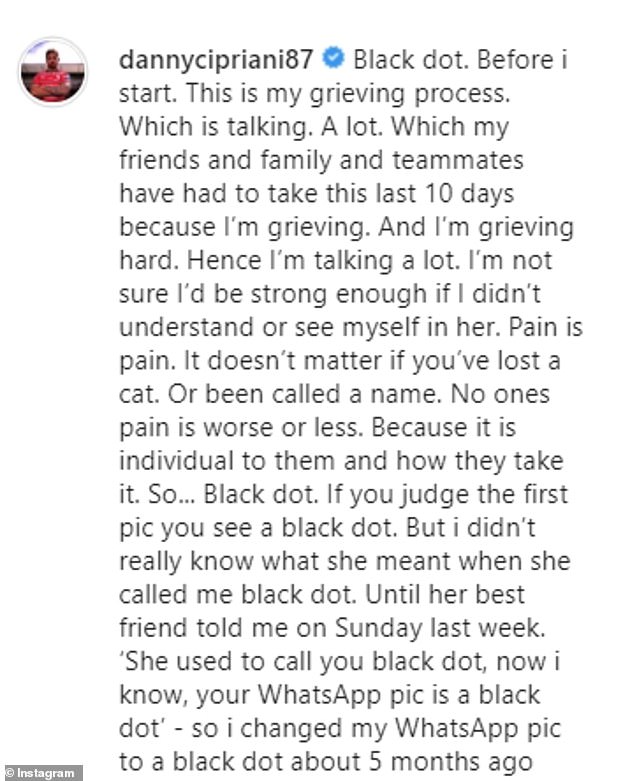 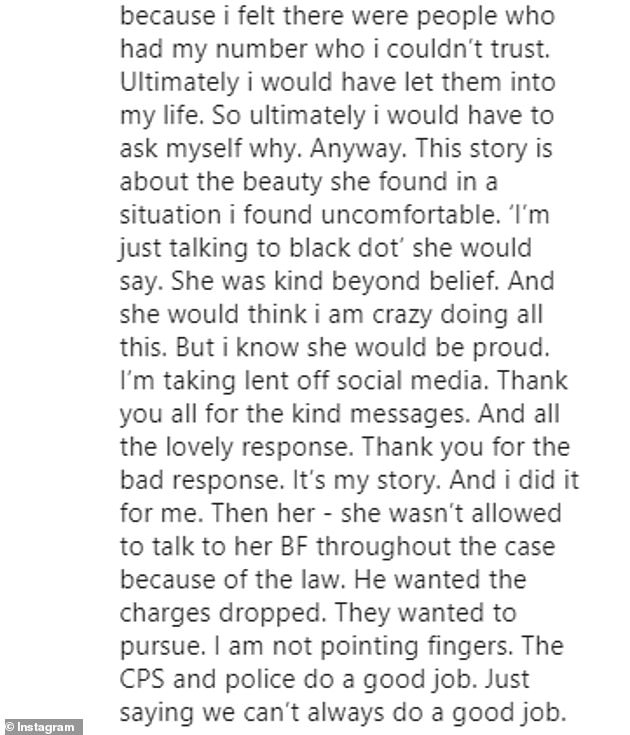 Pouring his heart out: He penned this post to talk about his feelings and the grieving process

‘”She used to call you black dot, now i know, your WhatsApp pic is a black dot” – so i changed my WhatsApp pic to a black dot about 5 months ago because i felt there were people who had my number who i couldn’t trust.

‘”I’m just talking to black dot” she would say. She was kind beyond belief. And she would think i am crazy doing all this. But i know she would be proud. I’m taking lent off social media. Thank you all for the kind messages.

‘And all the lovely response. Thank you for the bad response. It’s my story. And i did it for me. Then her – she wasn’t allowed to talk to her BF throughout the case because of the law. He wanted the charges dropped. They wanted to pursue. 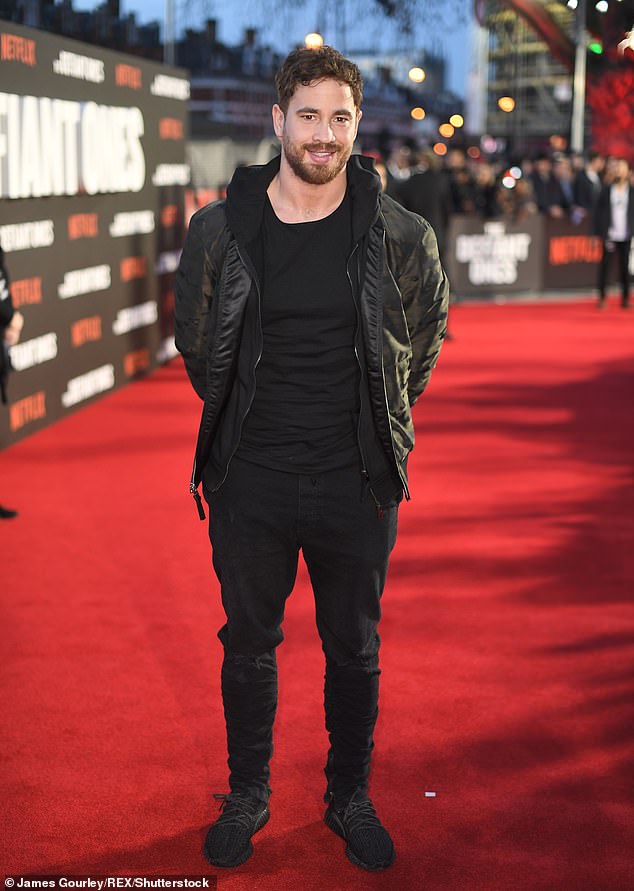 Opening up: Last year, Danny opened up about his past mental-health struggles in a heartbreaking 18-minute video posted on his Instagram account. Pictured in 2018

‘Our greatest strength is our greatest weakness ❤️ ps – I was shown how to disable comments. So I’m going to do so on this post.

‘Because it’s for me and my grieving process. But in a month i will be back on social because that’s 2020 and this is me navigating my way through life.’

Danny’s post was shared days after he bravely took to social media to reveal he once tried to buy a gun to kill himself.

Cipriani opened up about his past mental-health struggles in a heartbreaking 18-minute video posted on his Instagram account.

The famous rugby fly-half said that he had been talking with Caroline for the three to four months leading up to her death. 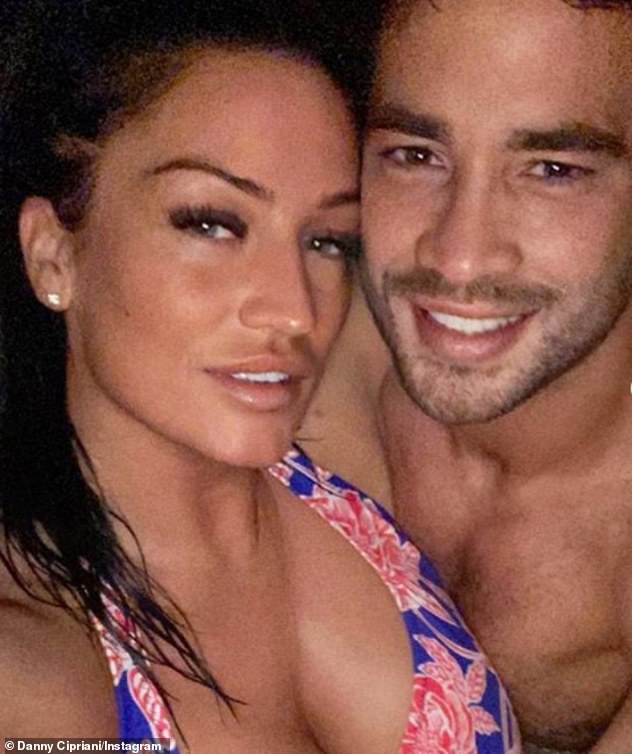 Happy times: The star appears to be in the throes of joy with his partner Victoria after announcing their engagement via an Instagram comment in August last year

He said that the TV presenter tried to contact him just hours before she tragically took her own life.

Danny said he felt ‘safe’ sharing everything with Caroline, and claimed ‘it was ultimately embarrassment and shame that killed her’.

He was unable to take the call or respond to her message because he was playing for Gloucester against Exeter in the Gallagher Premiership.

In the video, the former England superstar revealed that he went through ‘severe depression’ aged 22, and contemplated committing suicide.

He also spoke of causing himself ‘pain’ with ‘meaningless sex or painkillers or drinking alcohol’.

Cipriani said: ‘Someone that I loved as a person very dearly and someone I’m very close to has decided to take her own life, as everyone knows.

‘I was so vulnerable with her in my moment, when we first met, and I told her everything about me because I felt safe with her.’

‘I told her all the things I was embarrassed and shameful about. And she made me feel OK. And ultimately it was embarrassment and shame that killed her.

‘So I’m telling everyone now what my most embarrassing and shameful moments are, because I know she knew I had the strength to do this.’ 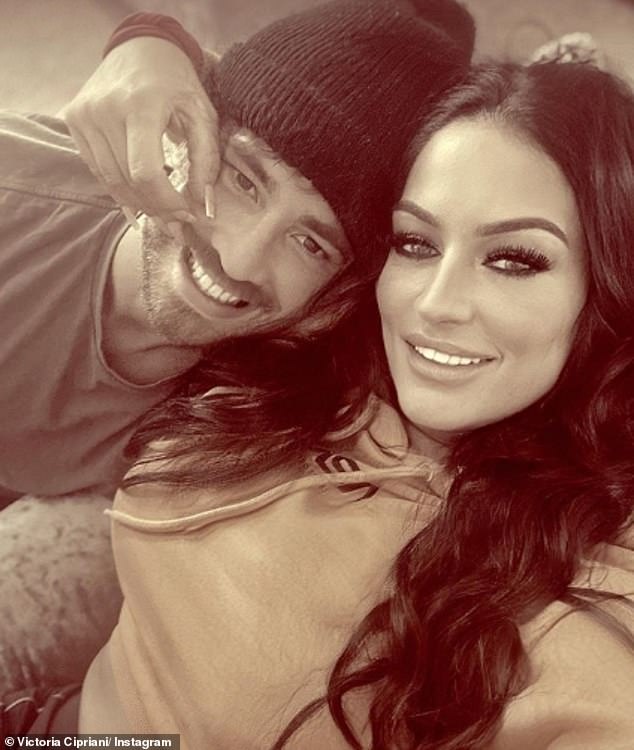 Family bond: When the couple wed, the sportsman will also take on the role of step-grandfather after Victoria’s daughter Jade became a mother four years ago

An emotional Danny said: ‘When I was 22, I was going through severe depression. I was seeing a psychiatrist.  I met a guy who was at a nightclub, he ended up being around.

‘I knew he was a bad man, was in the scene, trying to make his way in whatever he was doing. I decided at this point it was time for me to take my own life and I tried to buy a gun from him.

‘And I pulled out. Then I tried to buy it again, but I pulled out. This went on for two months. I couldn’t do it. Because I had some fight in me. That was something that I went through and I’ve had to carry that.’

It is believed the former Wasps player had joined the Melbourne Rebels when he considered buying a gun.

If you have been affected by this story, you can call the Samaritans on 116 123 or visit www.samaritans.org 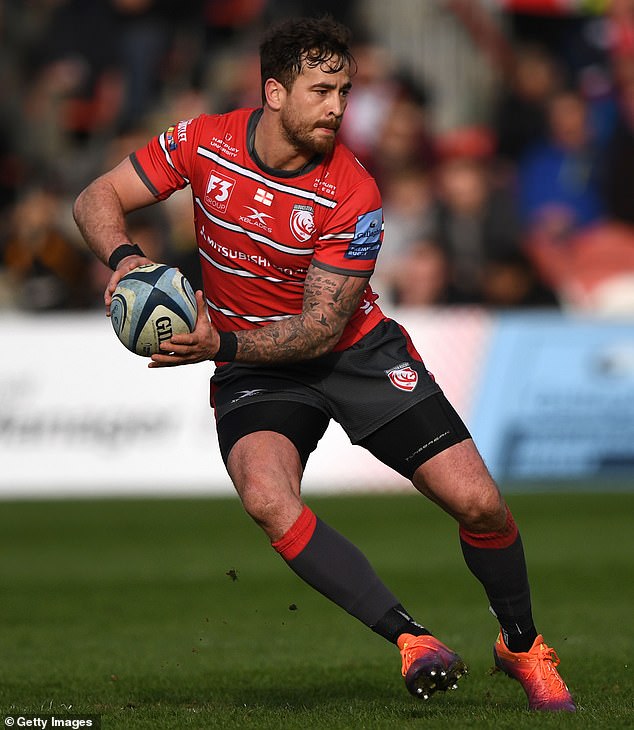 Departure: Last month, Danny abruptly left his rugby team Gloucester, announcing plans to take a break from the sport that helped make him a household name. Pictured in 2019