A Canadian theme park is unveiling its new dive roller coaster – the tallest, longest and fastest of its kind of the planet.

The coaster spans 3,625 feet in length and has a top speed of 80mph, according to the theme park’s website.

It’s the only dive coaster in the world with a 360-degree loop. It’s also the tallest such coaster with a hill peaking at 245ft, according to the park.

Dive coasters like the Striker start by leave riders suspended above near-vertical drops at roughly 90 degree angles before releasing them to plummet in free fall.

There are at least 13 other dive coasters around the world.

‘Most coasters aren’t that steep. Our steepest ride in the park[previously was] Leviathan at 81 degrees,’ a park spokesman told WKBW.

The new dive coaster stretches 3,625 feet in length with a top speed of 80mph 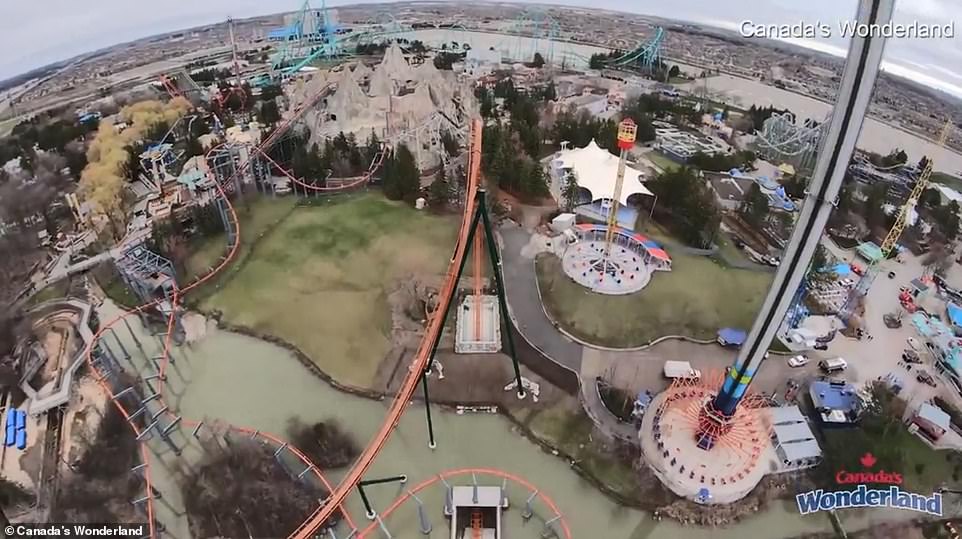 The ride also features a 245 foot drop and a 360-degree loop. The Striker will be open to the public when Wonderland begins its summer season on May 3

The Striker will be open to the public when Wonderland begins its summer season on May 3.

The Formula Rossa roller coaster in Abu Dhabi’s Ferrari World still holds the record for the world’s fastest coaster with a top speed of 149mph, according to Roller Coaster Data Base.

The tallest coaster on the planet is the 456ft Kingda Ka at Six Flags Great Adventure in Jackson, New Jersey. And the longest ride is the Steel Dragon 2000 at Nagashima Spa Land in Japan, which spans 8,133 feet.