A British free climber recorded the moment he dangled from Dubai’s tallest crane, more than 1000ft in the air, by just his hand.

Adam Lockwood put on his hardhat and posed as a workman in order to gain access to Dubai’s tallest crane – so he could dangle 1280ft above the city, as seen in this nail-biting video.

At the top of the crane he let himself hang using only his grip and upper-body strength to stop him from falling, in an experience he describes as quite ‘peaceful’.

He carried out the death-defying stunt from the crane on top of the 77-storey residential skyscraper Il Primo, directly next to the world’s tallest building, the Burj Khalifa.

Adam Lockwood climbed to the very top of a crane connected to the Il Primo skyscraper in Dubai, right next to the Burj Khalifa, and dangled by one hand 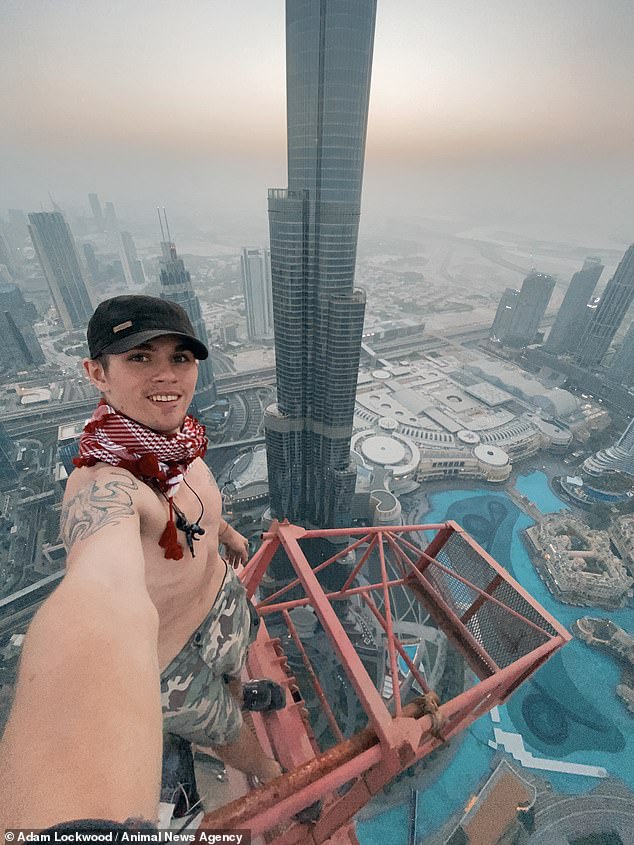 The fearless climber showed of the view of the Dubai skyline while more than 1,000 ft in the air 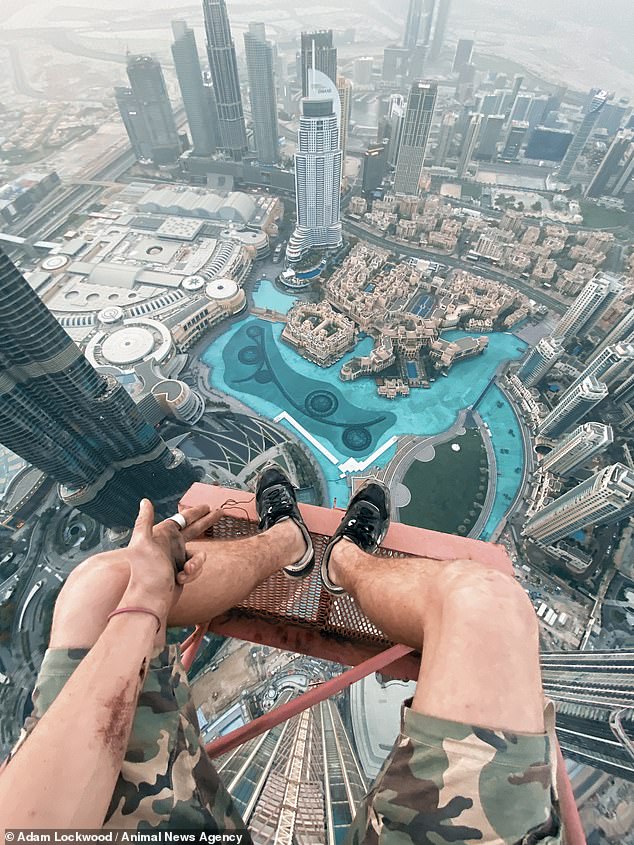 Long way down: The free climber posed as a workman so he could reach the 1280ft summit 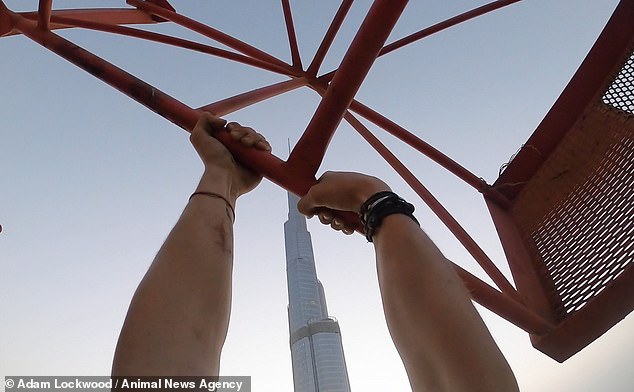 The world’s tallest skyscraper, the Burj Khalifa, can be seen towering over the building Adam climbed 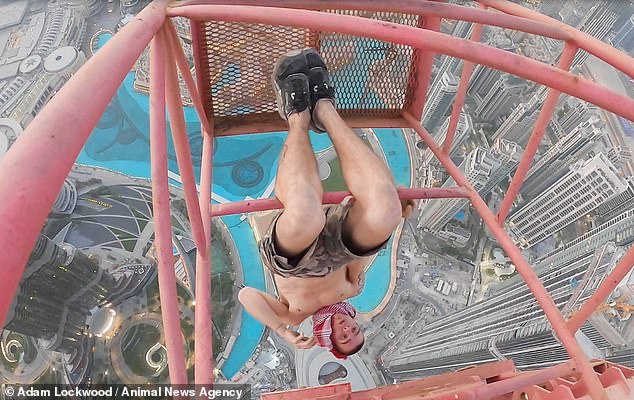 Dizzying views of the city can be seen below him as he hangs from metal bars, covered in slippery grease, making it even more astonishing that he didn’t plunge to his death.

A fall from this height would have about nine seconds of free fall before reaching the ground.

Adam said: ‘When I first looked at the footage, I was thinking to myself, ‘this is it, this is the most incredible thing I’ve done’.

‘The fact I hung off the tallest crane in Dubai on the doorstep of the world’s tallest building is something special and I feel like it was definitely worth the risk and legal consequences if I was caught.

‘I put a hard hat on to blend in whilst walking past 100 workers and slipped out the back gate without being noticed.

‘Climbing up the jib, I quickly realised the whole crane was covered in grease that I couldn’t even see, at first I thought it was dust from the desert but checking my hands it was grease, feet and hands slipping on everything I touched.

‘I had four close calls whilst climbing up and coming down. I had a few close calls too.’

But he seems completely unphased by the risks he takes as he calmly moves around the crane without any restraints to prevent him falling. 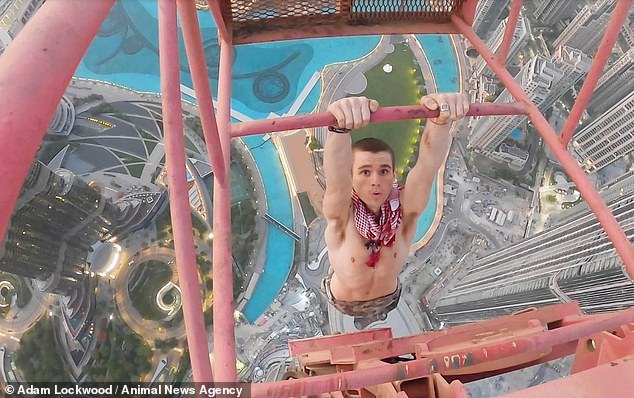 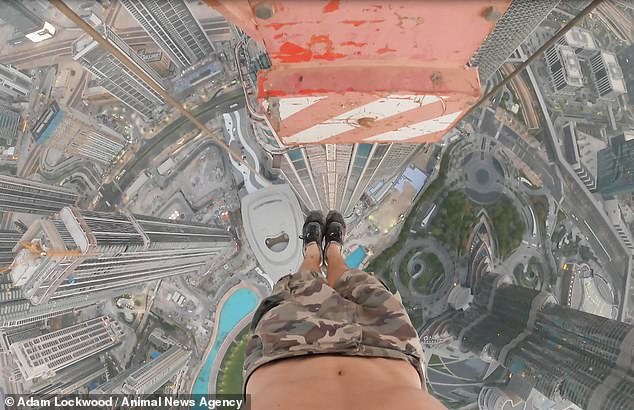 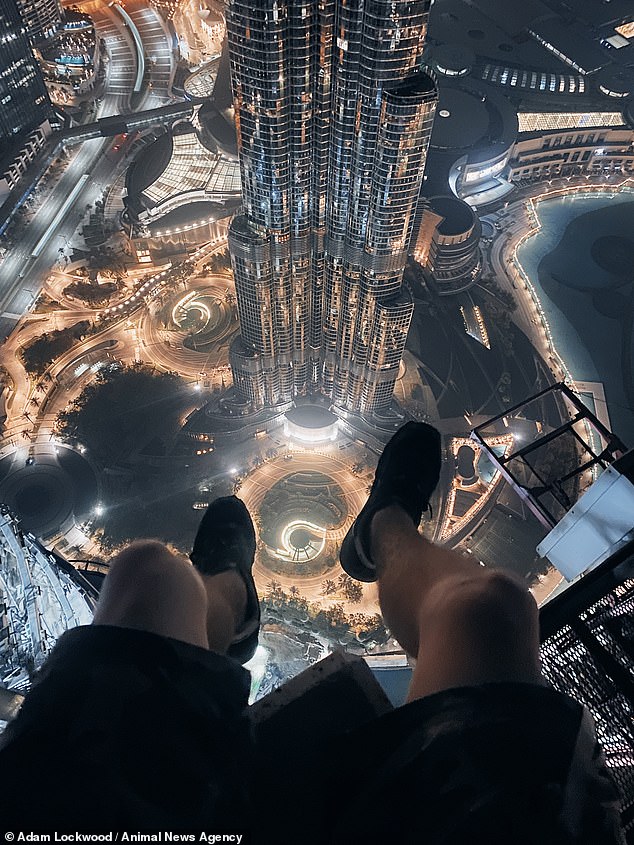 Adam, from Manchester, said: ‘Hanging off things doesn’t feel like much, it feels surreal to be suspended that high with no safety, but like all my other hangs, my brain is blank, my heartbeat doesn’t go up, and it feels almost peaceful.

‘It’s something I know I can do and that 99 per cent of the world can’t and never will do, so I feel obliged to use my ability and enjoy doing it in the process.

‘I love seeing things from height, I love having my body suspended hundreds of meters in the sky, I love the challenges of infiltrating secure places to achieve these goals and it’s something that has kept me alive since I started, and I don’t think I can give it up.

‘I slept for the whole day when I got back to my accommodation because I was so tired.’

Though it is not the first crane he has dangled from. 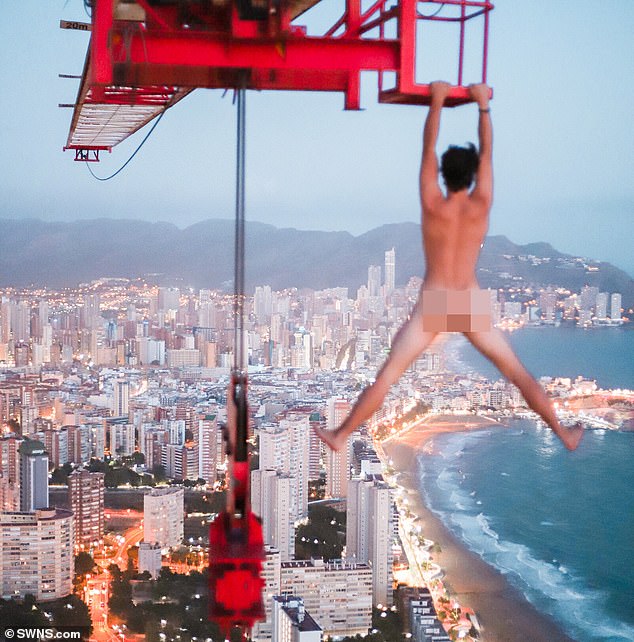 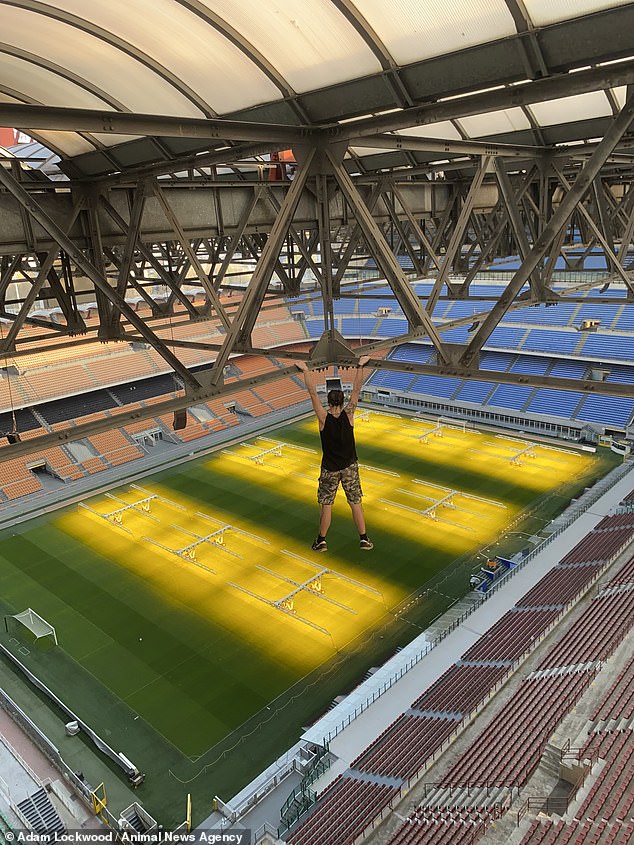 Adam Lockwood climbing and hanging from the San Siro stadium in Milan, Italy 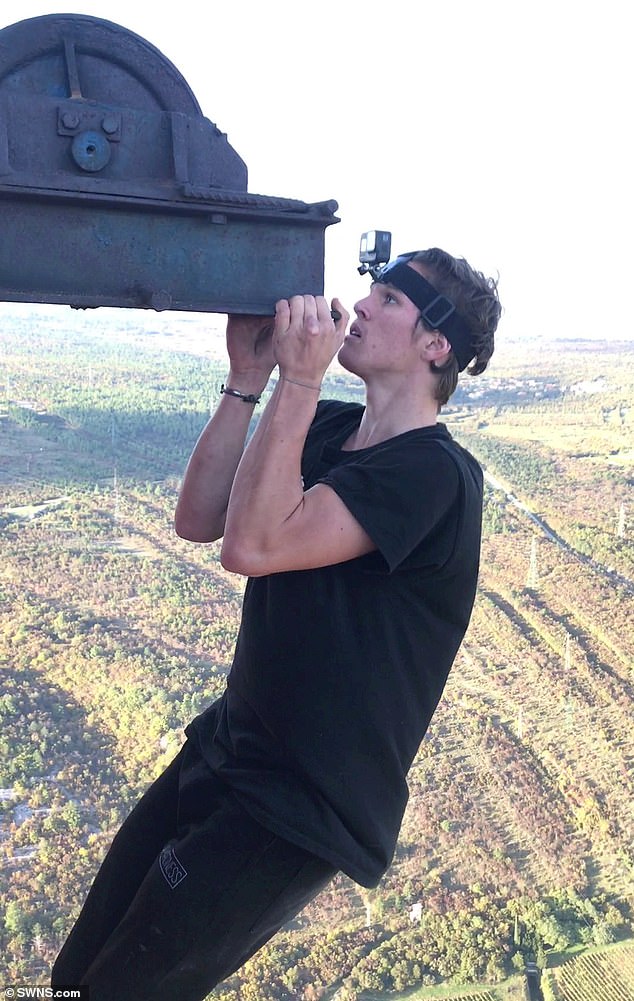 The daredevil, from Manchester, performed five chin-ups off the side of the massive chimney in Croatia 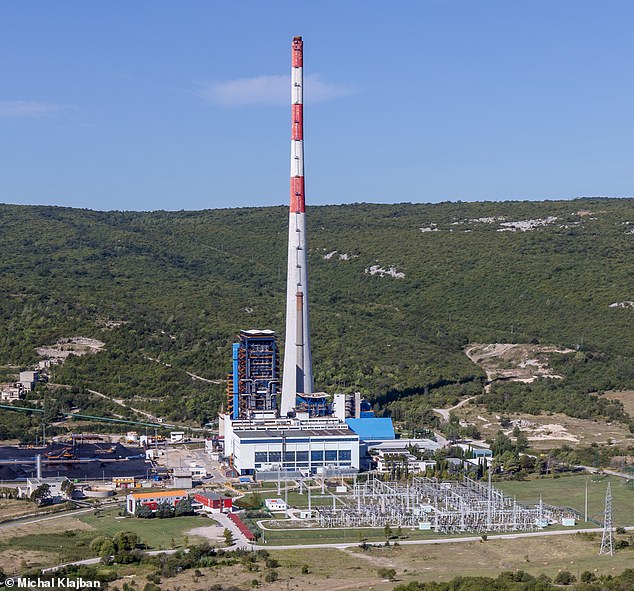 Plomin power station, pictured. Mr Lockwood said: ‘We started the climb at about 2am, so that we could make sure we didn’t run into any workers’ 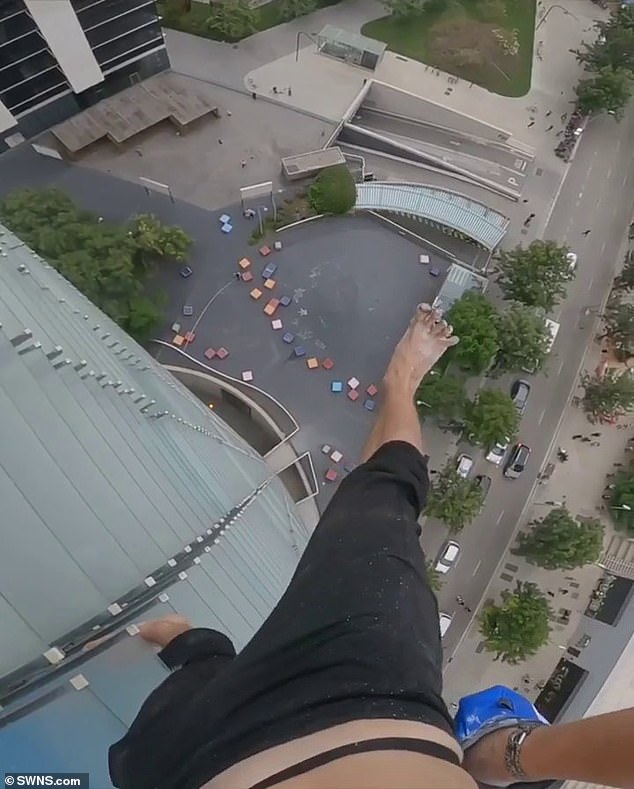 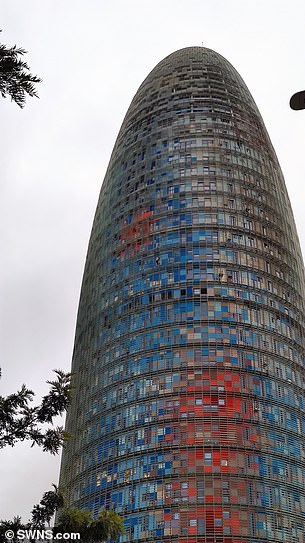 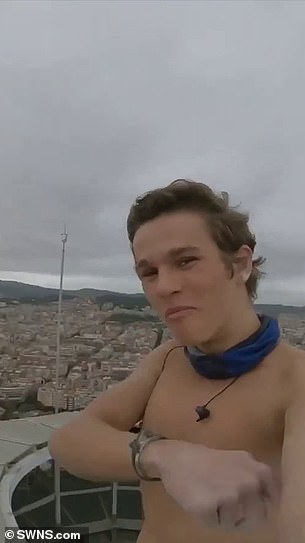 The crane climb is not the first time that Adam has performed a hair-raising stunt on an iconic world structure.

In April, he dangled from the 262ft San Siro stadium in Milan, and later scaled the famous glass pyramid at the Louvre in Paris to take a cheeky selfie.

He has also previously climbed a 470ft skyscraper in Barcelona – barefoot and waved to shocked crowds below.

His stunts have previously got him into trouble when a court banned him from climbing tall buildings, which he later breached and narrowly escaped jail.