Daredevil dangles backwards off the roof without any ropes

This is the stomach-churning moment a 22-year-old Moroccan daredevil dangles himself from a rooftop without any ropes in a move to ‘play with death’.

Khalid Tenni, from Rabat, lies on the top of a high rise building in his home city, with his feet held down by a friend.

He then dangles his body, knees down, holding a camera in one hand and with the other out in the air in the clip filmed on January 20.

Wearing jeans, a jumper and a gas mark, the daredevil then lets go of the camera and holds both hands in the air, placing all his trust in his friend who is holding his legs down.

After pulling himself up in a sit up motion, he then gets up, before letting his friends swing him, while shouting ‘what the f***?’

On the edge of a high rise building, a pair of friends hold Mr Tenni, one by the feet and one by the wrists and swing him back and forth, just inches away from death.

Two death-defying stunts aren’t enough for the thrill-seeker. As he then goes onto perform a handstand on the edge of the rooftop.

After filming the shocking video, the adrenaline junkie said: ‘Today I decided to challenge the fear and playing with death and doing the craziest thing ever at the top of the roof without any safety’.

The 22-year-old freerunner has racked up millions of views for his death-defying stunts and nail-biting videos.

Khalid Tenni, from Rabat, Morrocco lies on the top of a high rise building in his home city, with his feet held down by a friend 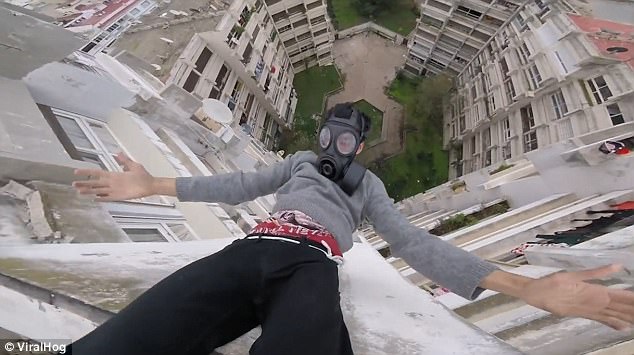 Look no hands! The thrillseeker lies on the top of a high rise without hanging onto anything 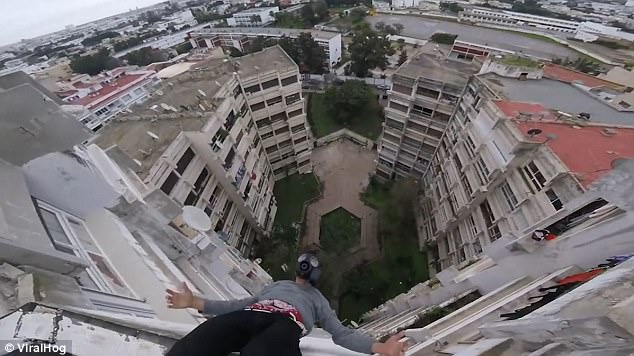 Mr Tenni, 22, climbed to the top of a high rise in Rabat, Morocco to perform death defying stunts

He previously hit headlines for keeping fit by using the rooftops in his home city of Rabat to keep fit, rather than hitting the gym.

His gruelling regime even sees him working out up to a staggering eight hours a day, morning and evening in his bid to craft his muscles.

While his playground looks like a health and safety nightmare, he makes sure that safety is always at the forefront of his workouts and never attempts anything which might be uncomfortable or push him over the edge. 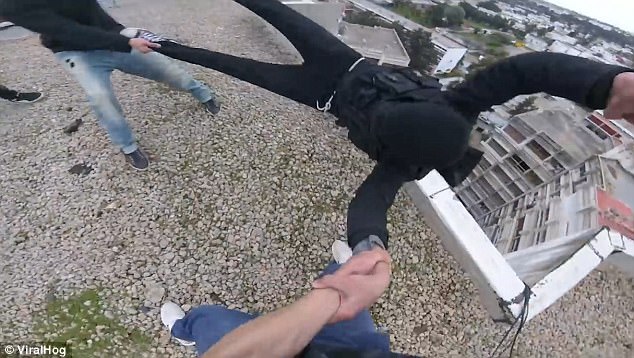 After pulling himself up in a sit up motion, Mr Tenni then gets up, before letting his friends swing him, while shouting ‘what the f***?’ 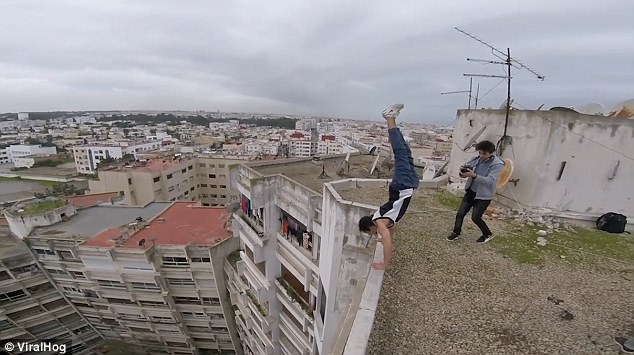 Two death-defying stunts aren’t enough for the thrill-seeker. As he then goes onto perform a handstand on the edge of the rooftop

Mr Tenni said: ‘I have to choose what is safest and comfortable for my body as I could die if I made one wrong move.

‘I take smalls steps to achieve my goals and never push myself too far at one time.

‘The streets are my gym because everything I need is there, whether I’m doing handstands on top of a building, or just doing some chin ups on a bar – it’s all freely accessible.

‘It can look like a dangerous life to most people but, to me, it’s just games that help to keep my brain active while I work out.’