Daredevils risk death by surfing in Miami as Irma nears

More than a dozen daredevils in Miami risked death as they partied on the beach while Florida residents braced for Hurricane Irma’s terrifying 130mph winds.

‘F**k you, Irma!’ yelled some of the 20 surfers as they drank beer, white wine and champagne on Miami’s South Beach on Saturday.

But by the afternoon, the surfers retired to the beach after the water started churning like a ‘washing machine,’ George Granizo, 51, told the New York Post.

The group said they gathered on the beach to mark the one-year anniversary of the death of one of their friends, who had died while surfing. 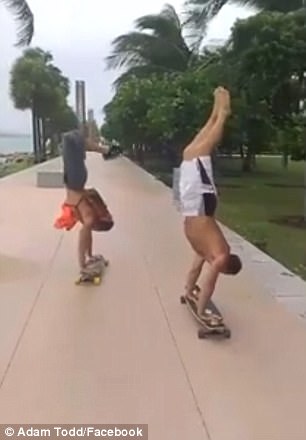 More than a dozen daredevils in Miami risked death as they partied on the beach while Florida residents braced for Hurricane Irma’s terrifying 130mph winds. Skateboarder Adam Todd (left and right) was spotted doing a handstand on Saturday ahead of the storm 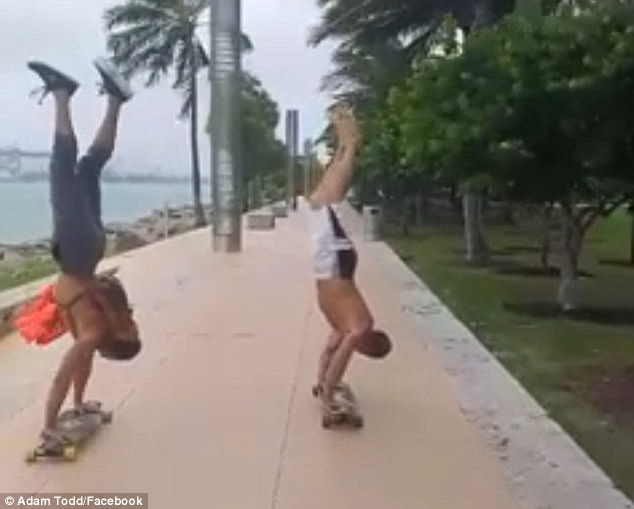 Miami-Dade and Broward counties won’t get sustained hurricane winds, only dangerous gusts, which won’t be nearly as bad as expected. But forecasters said tropical storm winds may extend into Sunday night. Todd is pictured skateboarding with a woman on Saturday

Annie Tworog, 38, told the Post: ‘We are related by the water — that sounds so cheesy. But we’re all surfers, and our good friend died a year ago today so we’re celebrating him.’

Miami-Dade and Broward counties won’t get sustained hurricane winds, only dangerous gusts, which won’t be nearly as bad as expected.

A tornado watch is in effect until at least noon. Two tornadoes touched ground Saturday in Oakland Park and Wilton Manors, and tornado warnings were briefly in effect Saturday night and early Sunday morning in Miami-Dade, Broward and Palm Beach counties, according to the Miami Herald.

Storm-surging seas are also predicted to hit the Miami area. Overnight from Saturday to Sunday, some streets had already flooded in downtown Miami and Miami Beach.

The National Weather Service issued a flood warning at 4.40am.

But despite the tornado watcha and storm surge, Jona Cerwinske, told the Post that he believes they ‘are being spared damage and destruction from the storm’.

‘He is fending off Irma from us. He left us in the ocean while surfing,’ Cerwinske said, speaking of the group’s friend who died while surfing.

Meanwhile, Adam Todd, 43, was spotted doing a handstand while skateboarding down Ocean Drive.

‘Doesn’t make a lot of sense,’ Todd admitted to the Post as he laughed it off.

Todd was seen skating down Fifth Street in Miami alongside another skateboarder. He even took a photo lying underneath a tree that had fallen in the area.

‘Getting a bit breezy around here,’ he wrote on Facebook. 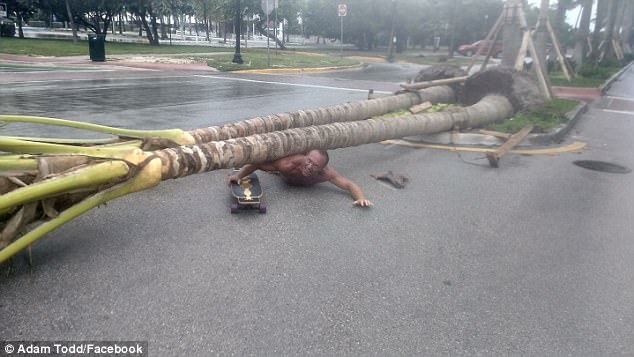 Todd even took a photo lying underneath a tree (pictured) that had fallen in the area. ‘Getting a bit breezy around here,’ he wrote on Facebook

Miami Beach Mayor Philip Levine announced on Sunday morning that he is unsure when it will be safe for residents of the Miami area to come back.

Hurricane Irma made landfall on Florida, Sunday morning as it slammed into Key West, bringing sustained winds of 130mph, as well as rain and threats of tornadoes in what is expected to be one of the worst storms to hit the area in living memory.

The state thought it had escaped the worst case scenario as the storm moved into land and was downgraded to Category 3 – but late Saturday night it re-energized and was upgraded back to Category 4, the second-worst level, with gusts of up to 144mph.

So far, three people have been killed because of the storm.

One man was killed after tropical-storm-strength winds caused him to lose control of the truck he was driving through Monroe County. He had been carrying a generator, local officials said.

Two others died in a car accident in Hardee County, Florida, the Florida Highway Patrol said. The area is around 60 miles inland from Sarasota.