But fans were left more than a little disappointed with Darryl Braithwaite after he performed the track at Melbourne’s Cox Plate on Saturday.

A number of listeners took to Twitter to slam the 68-year-old’s rendition of the song, which took place by the racecourse.

Colt classic! Many listeners took to Twitter on Saturday to slam Darryl Braithwaite’s performance of his hit track, Horses, at Melbourne’s Cox Plate

‘Time to put Darryl out to pasture, no more Horses, please!!!’ railed one user, employing an equine pun that reflected both the song’s title and the Cox Plate event it was performed at.

Another listener not only savaged Darryl’s vocals, but also his outfit.

The crooner opted for a light grey t-shirt as he took to the stage in front of punters.

Horsing around! A Twitter user employed a horse pun for his criticism of Darryl

Savage: One user took aim at both Darryl’s voice and wardrobe

‘So are we ready to talk about how painful Darryl Braitwaite’s Horses performance was? And that Lowes tshirt?’ the Twitter user wrote.

A third fan on summed up by slamming the performance in four words: ‘Wow. This is woeful’.

However, not everyone felt the same way, with a number of other listeners enjoying the ARIA Hall of Fame star’s set.

She’s a fan! A woman by the name of Kristine was feeling patriotic after Daryl performed his iconic song 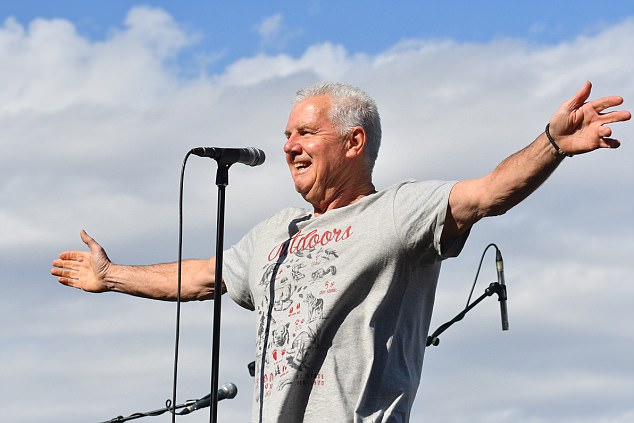 Performing for punters: Daryl looked happy to be before the crowd

‘Darryl Braithwaite and the crowd just performed a rousing rendition of Horses. I love Australia’  tweeted a fan named Kristine.

Another tweeted that it was Darryl who was the star attraction at Cox Plate, rather than the race horses.

‘Most of the crowd at Moonee Valley seems to be here for Darryl Braithwaite’ he observed.

The star will be back in Melbourne performing at Students Oaks Day on November 9.

Mixed reactions: One pointed out that it was Daryl, and not the racehorses, that Cox Plate punters were hoping to see