A darts player has been slammed for a ‘despicable’ lack of sportsmanship after appearing to deliberately attempt to put off his World Championships opponent by coughing.

Justin Pipe defeated Bernie Smith 3-2 in their opening round clash at the PDC Championship at Alexandra Palace on Thursday night.

Pipe was seen to cough as Smith attempted a double 10 check-out to win the match while 2-1 up. He missed, and Pipe turned the game around to triumph.

His actions were criticised by former player and now pundit Wayne Mardle, who called for an official investigation.

Mardle said: ‘It didn’t look good, did it? Every time I see it I think, ‘How desperate are you?’ It looks absolutely despicable behaviour by a professional darts player.’

The video showing Pipe having his coughing fit was widely shared on social media, with the player accused of deliberately accentuating his actions in order to put Smith off.

From a side angle, Pipe can be seen walking closer behind the New Zealand player, who came through qualifying, before coughing again. 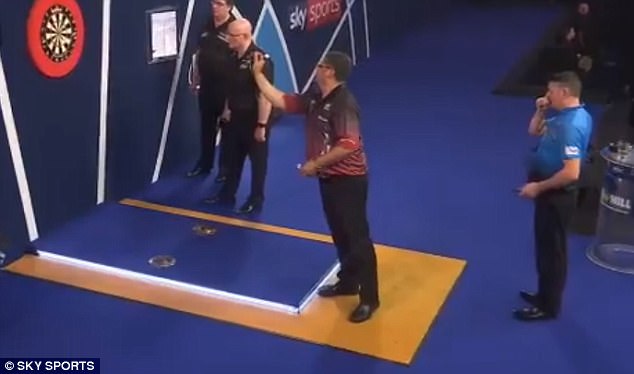 Pipe completed his comeback after Smith missed his crucial checkout, and now faces the legendary Phil Taylor in round two of the tournament in north London.

Mardle raged: ‘As we saw on the second clip, Bernie Smith is there and Justin Pipe moves in to get closer, then he lets out the cough.

‘I have been around darts so long and this sort of thing has been going on for years, where someone tries to talk somebody out of the game – but that has gone. What was allowed on a football pitch in the 1970s is not allowed now and it’s exactly the same up there now.

‘He got his way – whether Bernie heard it or not is absolutely irrelevant. The intent is there and the DRA (Darts Regulatory Authority) have to do something. If Phil Taylor did that, it would be reported on the back page of every newspaper. That was disgusting.’

Mardle’s fellow pundit, former world champion John Part, agreed that at best Pipe made no attempt to stop his coughing from interfering with his opponent.

Part said: ‘The point is that when you feel the need to cough, you go for the water. There was no effort to go for the water there. Bernie kind of paused. He might have heard it. If he did, he was very diplomatic.’

Pipe denied any accusations of foul play, saying he was ‘bitterly disappointed’ by Mardle and Part’s comments.

In an official statement released through the PDC, he said: ‘I would never do something to put another player off and Bernie didn’t say anything to me on the night. As far as I’m aware there is no issue from his side and this has been blown out of all proportion.

‘My focus is on preparing for my game against Phil. It is an honour to be playing him in his final tournament and I just want to concentrate on that match.’