In the hours before a love-sick Darwin man allegedly gunned down four people, his trial has heard he paid a visit to his estranged girlfriend’s home armed with a hammer.

Benjamin Glenn Hoffmann has pleaded not guilty to four counts of murder in less than an hour at four locations in the afternoon of June 4, 2019.

In the early hours of the morning, the 47-year-old drove his Holden Commodore to a woman’s home in Darwin’s outskirts with his mate, Mihalis Makrylos.

Ben Hoffmann, 45, is accused of using a pump action shotgun to kill four men and seriously injure a woman in and around Darwin on June 4, 2019

‘He parked outside the premises … She had a torch on her and I could see her blonde hair,’ Mr Makrylos told the Northern Territory Supreme Court on Wednesday.

Hoffmann and the woman spoke for about 10 minutes while Mr Makrylos waited in the car.

‘After he finished talking to the girl he came into the vehicle that’s when he gave me the hammer,’ he said.

‘I never knew the whole time that he had a hammer on him.’

Mr Makrylos said Hoffmann had consumed crystal methamphetamine as the pair drove at speeds of up to 180km/h to the woman’s home.

Hoffmann’s ex-girlfriend, Kelly Collins, has previously told the court that she and Hoffmann smoked ice at her home earlier the same night before the four men were killed.

She said he smoked ‘quite a bit, as in three pipes’ in about an hour then left before returning later in the evening.

‘He tried to coerce me to go with him,’ she said of Hoffmann’s late-night visit.

After the incident at Ms Collins’ home, Mr Makrylos said he and Hoffmann drove to the Royal Darwin Hospital.

‘The nurse had called him in (and) he called me over and told me I had to walk home,’ Mr Makrylos said.

‘Once I left him, he called me back and he said to me ‘if any police or anyone says anything, tell them I’m delusional’.’ 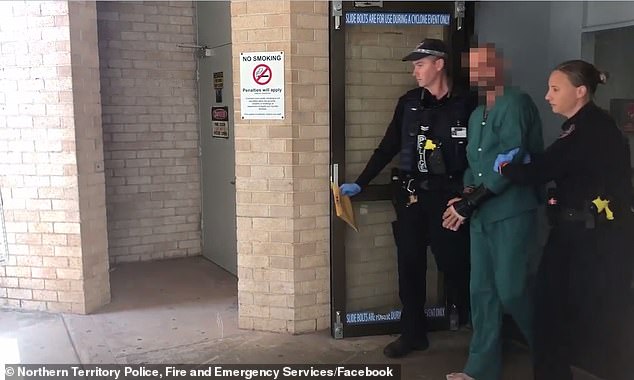 Hoffmann (pictured being released from hospital after his arrest) has pleaded not guilty to four counts of murder in less than an hour at four locations in the afternoon of June 4, 2019 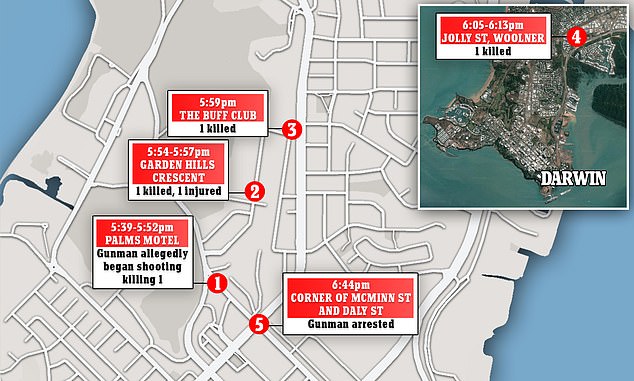 Hoffmann claimed to hospital staff that his drink had been spiked and asked them to take a blood test and provide an antidote.

But tests found no evidence he’d been poisoned and a doctor told him to go home.

The Crown says Hoffmann’s first victim, Hassan Baydoun, 33, died later in that day about 5.38pm at the Palms Motel.

Hoffman then allegedly shot Nigel Hellings, 75, at an apartment block and Michael Sisois, 57, in a car park.

Rob Courtney, 52, was stabbed more than 30 times and shot dead at Darwin Recycling.

After the murders, Hoffmann told police he believed he’d been poisoned the night before the killings.

He said it caused him to be ‘out of his mind’ and temporarily insane.

10.52am: Police allegedly catch Benjamin Glenn Hoffmann doing 94km/h in an 80km/h zone. He is fined and allowed to leave.

5.45pm: He allegedly shoots dead taxi driver Hassan Baydoun, who was on a break at the taxi rink nextdoor

– He also allegedly shoots a woman in the legs

5.50pm: Hoffmann drives two minutes away to Gardens Hill Crescent where he allegedly enters a home and shoots a 76-year-old man dead

5.59pm: Just before 6pm, Hoffmann is alleged to have stormed into the Buff Club pub and killed a 57-year-old man

6.30pm: The alleged gunman then drives to an NT Police Station, after earlier calling the duty superintendent and asking to be placed in protective custody

6.45pm: Hoffmann is arrested by police in the Stuart Park area of Darwin