Hundreds of revellers had to run for their lives as the tide suddenly turned and threatened to engulf a sandbar holding a wild party.

Chaotic footage showed the crowd of 600 scramble for safety 400m off Cullen Bay in Darwin where revellers gathered for the rave on Saturday.

As the sea level rose sharply, partygoers climbed aboard a boat, while others clung onto floating objects to survive.

Water Police were called for assistance after some of the boats collided in the chaos, and the overloading of small boats led to one capsizing.

Altercations between groups on boats also occurred, and a 48-year-old man was taken to Royal Darwin Hospital for assessment.

‘People don’t realise how quickly a situation can change with the NT tides, and it was disappointing to see such a large crowd be so irresponsible and put so many people at risk.

‘Approximately 300 litres of alcohol was seized and destroyed.’

600 partygoers have been left scrambling for safety after attending a sandbar party 400 metres off Cullen Bay in Darwin (pictured, the huge gathering)

NT News claimed some boat operators who took partygoers across to the sandbar initially asked to be paid in drugs.

Organisers of the party said revellers were responsible for their own safety after the horrific scenes.

They hired a boat to ferry people back and forth to the sandbar, but didn’t anticipate the massive tide change.

The organisers also had a Covid-19 check-in QR code for people arriving at the party.

Lucy Beare, who attended the party, said when the tide started to creep in, the music stopped and everyone was told to get back to the shore.

‘Everyone was stranded on the bar, standing there trying to ask for lifts,’ another partygoer told NT News.

Other onlookers said that there were more than 20 boats bringing people back from the island, and the music shook shopfronts on the shore.

Bureau of Meteorology meteorologist Billy Lynch said the organisers underestimated the highs and lows of a spring tide.

‘They would have gone to the sandbar because of the big low tide,’ he said.

‘But you also get a good high tide and when that happens the tide comes in pretty quickly.’ 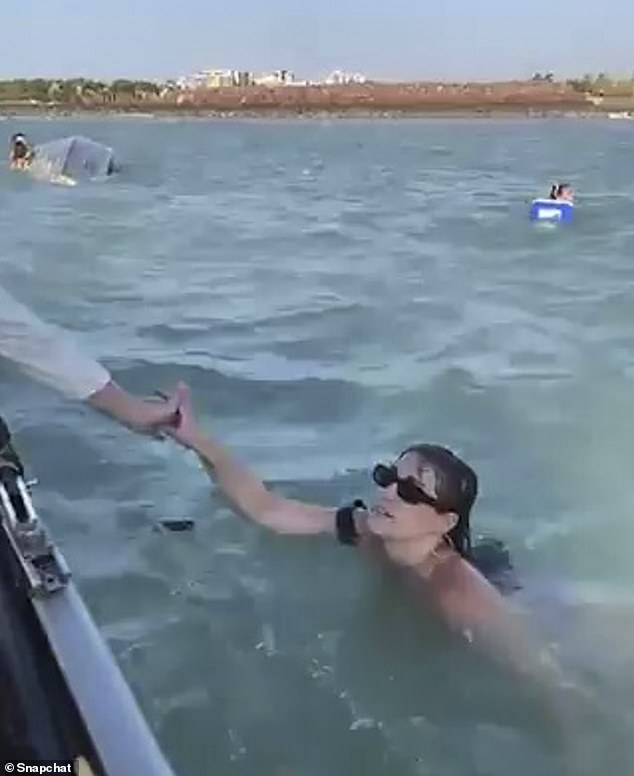 After the tide rose quickly, the sandbar was quickly submerged leaving revellers to attempt to find safety on boats (pictured, a party attendee finds the safety of a boat)

Meanwhile, the Northern Territory has started rolling out the Covid-19 vaccine in Darwin schools, with students at one school already rolling up their sleeves.

Senior students are being prioritised for the vaccine to ensure they’re not disrupted during their exams in the final weeks of term four.

Middle school students will begin receiving their first dose next month after all children aged 12 or older became eligible for the Pfizer vaccine in late August.

Health Minister Natasha Fyles encouraged younger Territorians to get the jab, saying the Delta variant was seeping out of NSW and Victoria.

‘There are plenty of appointments available, our teams will be in schools, they’ll be out in the bush, so now is the time to get vaccinated,’ she told reporters on Monday. 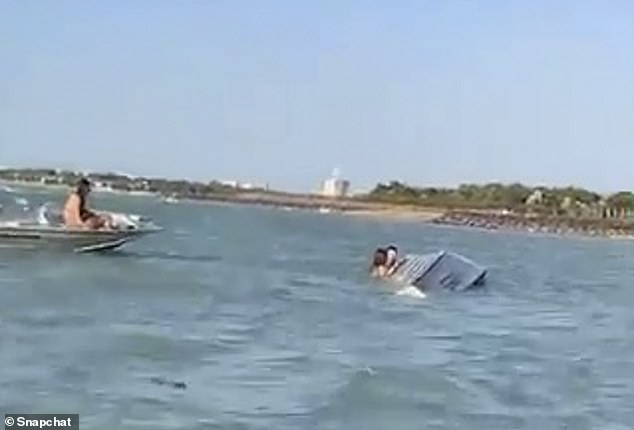 Some were left stranded, hanging on to floating objects before they were rescued (pictured, attendees hanging on for safety)

Year 12 student Mikey Coleman says he and his fellow students were excited and keen to get the jab.

‘It’ll be really helpful for the Year 12s doing their exams next term and with us vaccinated hopefully we’ll be able to attend school if we do go into lockdown,’ he said.

‘Also for any students wanting to go to university next year down south, being vaccinated will allow them to be able to travel.’

Like other school-based immunisation programs, parental consent is required.

Students will not be vaccinated unless a signed consent form is returned to school.

More than 70 per cent of Territorians have received their first Covid-19 dose and more than 50 per cent are fully vaccinated.