A Byron Bay motorist has been caught copping a hefty fine for an unsecured load by another driver with a dash cam.

The footage shows the brazen culprit driving with a several metre wide cylinder of piping almost hanging off the rear of the utility vehicle.

Along with the loosely attached building tools, the motorist also has other equipment in the tray of the ute.

The additional unsecured load appears to contain a large rectangle of wood and other unsecured building supplies.

As the white Nissan Hilux careened down Ewingsdale Road just outside of Byron Bay, the dash-cam owner is forced to pull over to avoid a collision with the side of the pipe.

Soon after, a black Highway Patrol car turns on its sirens and takes off in pursuit of the vehicle.

On the Dash Cam Owners Australia Facebook page where the video was posted, users were quick to berate the owner of the load saying tools needed to secure the freight are not hard to find.

‘Wouldn’t be great if the same stores where one can purchase a variety building materials also sold ropes, straps, and chains in various ratings?’ one user asked.

In New South Wales motorists who are caught driving or towing an unsecured load must pay a steep $439 fine and lose three of their twelve demerit points. 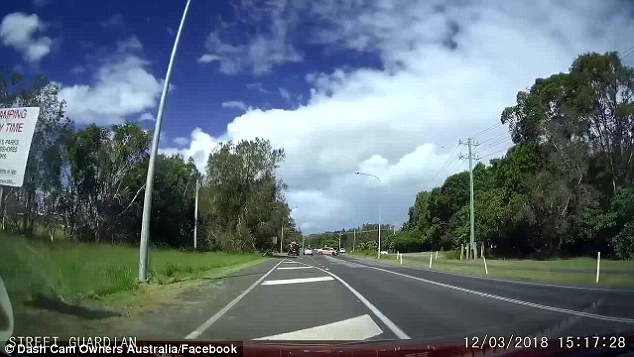 Immediately after pulling over to avoid a collision, the dash cam captures a Highway Patrol car pursuing the law-breaking vehicle