How NOT to merge: Unbelievable moment a Lexus overtakes far too late and swerves off the road – but some think the car it clipped was to blame

Frightening footage has emerged of the moment a driver swerved off the road after a failed attempt to merge.

The dashcam video from 2019 shows a Lexus spin out of control at Bringelly, south-west Sydney, after an unsuccessful attempt to overtake.

The luxury car merges too late and clips the front of the dashcam driver’s vehicle, swerving off the road while narrowly avoiding a collision with oncoming traffic.

‘The f*** are you doing?’ the dashcam driver says afterwards.

The incident left some viewers condemning the Lexus driver for their risky behaviour that could have caused a major traffic accident.

‘Seen plenty of these near misses, interesting to see what happens when they run out of luck, ‘ wrote one person.

‘If you need to use the breakdown lane to overtake, then you have missed the opportunity to overtake. Pride and arrogance was at fault here,’ commented another.

Wow, that could’ve been a lot worse. Scary.’ Added a third.

But one person disagreed, arguing the dash cam driver was in the wrong instead.

‘[He] moved to the left and ultimately caused the collision,’  one said.

In NSW, when merging motorists must give way to the vehicles in the lane they wish to change into.

If the lane is coming to an end and drivers need to cross a broken line to merge they must still give way.

NSW road rules advise drivers to slow down and look for a suitable gap to change lanes safely. 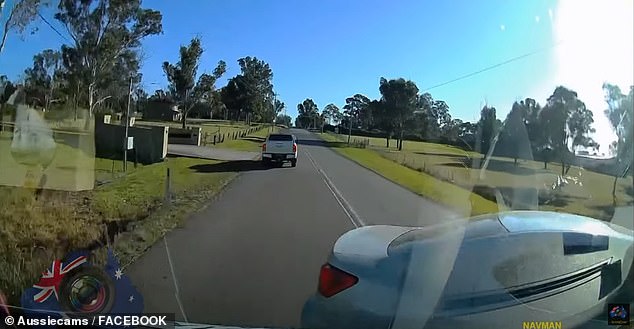