A driver has been blasted on Facebook after posting a video taken from his dashcam of him speeding up at a family with young kids and screaming foul-mouthed abuse at them.

The situation is made even worse by the fact that his own child is in the car with him as he attacks the other family, whose children ran in fear of their lives.

Footage posted to the Dash Cam Owners Australia site starts with the car driver listening to the radio and his young child asking him a question, which he doesn’t answer.

Within seconds they pass a large yellow road sign with a picture of people crossing the road and a very clear marking saying ‘Refuge Island’.

A second later, a family with young children is seen crossing the road about 50 metres ahead, but instead of slowing down, he appears to initially speed up while expressing his rage by swearing at them.

‘It’s not a f***ing cross,’ the driver says, while beeping his horn loudly for seconds on end.

Two children crossing are forced to stop walking and start running to avoid being hit, while a woman stares at the driver in disbelief at what he is doing.

He then finally slows down, but roars at the family: ‘Not a pedestrian crossing, you don’t have right of way,’ as he passes by the people he came very close to hitting.

The page hosting the video posed a question beside the video asking: ‘You see children crossing the road ahead. Do you A. Accelerate at them blaring your horn, or B. Slow down and allow them to cross?’

The post quickly got more than 800 comments, with most slamming the driver for his behaviour.

‘Considering that you could see people crossing the road ahead even while still on the roundabout, you continued to accelerate towards them at increasing speed only to then have to hit the brakes… to make a point,’ wrote one, summing it up very well.

‘Regardless of whether or not they have right of way. You can clearly see them crossing five seconds before he starts blowing his horn!

‘If he had just slowed for a couple of seconds they would have been across the road and he could have carried on with his day,’ said another.

‘That is a proper pedestrian crossway. There even is a yellow sign,’ another poster pointed out. 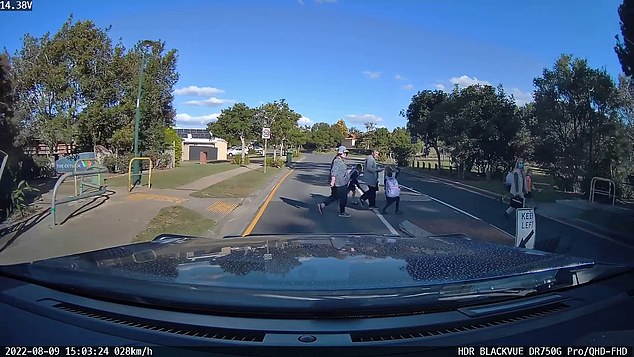 An angry driver beeped his horn and shouted abuse at people, including children crossing the road, while capturing the whole incident on his dashcam

Many people said the driver should have been more careful given he had a child with him.

‘Great example setting to his own kid in the car. Good luck when it comes time to teach them to drive,’ one said.

Others said it was far from being an isolated incident, more like a common problem.

‘The impatience of drivers in this country is utterly remarkable!! It’s not just a few, it’s the majority! Wtf is their problem,’ one person asked.

Some, like the driver in the video, resorted to bad language to express their view of him.

‘Dash cam driver is a complete tool. It took a whole five seconds of his life to slow down, instead he drives up to and blows his horn like a knob,’ said one. 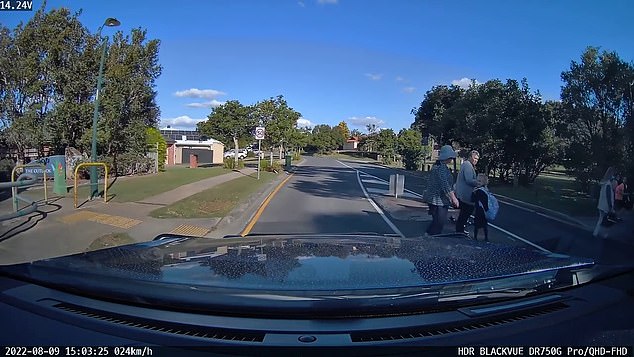 Two children crossing are forced to stop walking and start running to avoid being hit, while a woman stared at the driver in disbelief at what he was doing

There was some support for the driver, though, with a few people blaming those crossing the road.

‘There is no fixing stupid, and the pedestrians were actually really stupid,’ said one viewer.