Would you get a lift from this man? Nailbiting dashcam footage records driver recklessly overtaking cars and speeding along a 30mph street because he is late for work

This is the moment a reckless driver hits almost 50mph and speeds past a queue of traffic in the wrong lane – because he is late for work.

Dash cam footage captured the motorist, who appears to be talking on the phone, as he zooms down the wrong 30mph lane during morning rush hour in Lowton near Wigan, Greater Manchester.

The clip was posted on social media where the caption explained that the driver was speeding because he was late for work.

In the video, the reckless motorist overtakes three vehicles and narrowly avoids a collision with a pedestrian island as he swerves into back into the correct lane.

A reckless driver speeds in a 30mph zone during morning rush hour in Lowton near Wigan, Greater Manchester

He can be heard saying: ‘Sorry, I’ve got lots f***ing happening today. You know what, right?’

As he approaches the next set of traffic lights he again veers into the lane for turning right.

Realising he has made a mistake as the queue of traffic is long, he says: ‘Oh no.’

He begins to overtake a further ten cars, and can be heard saying: ‘Has he well f***ed up here? I think he has hasn’t he?’ 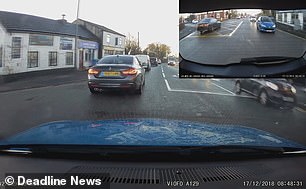 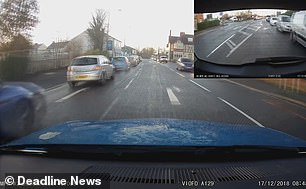 After passing the cars he reaches the crossroad junction and runs out of road.

‘Yeah, I’m just going to have to do that’ he says, as he merges in front of a blue Peugeot in the slow moving traffic beside Kenyon Lane.

The video, which has recorded the speed, the vehicle is shown as hitting nearly 50mph at one point.

The clip taken by the unknown driver emerged on social media after a friend posted it before it was deleted. 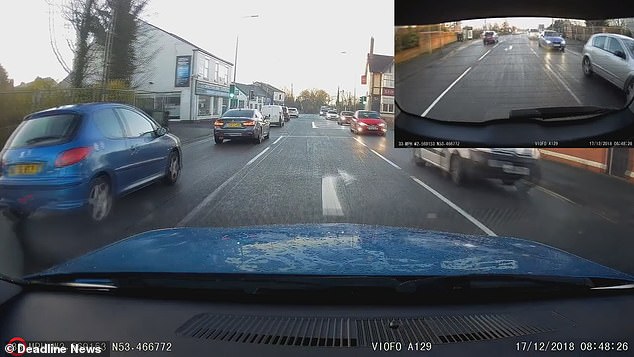 Peter Waterworth, who originally posted the video before taking it down, admitted: ‘I’ve had to take it down, he didn’t want it posted so isn’t happy.’

President of AA, Edmund King, said: ‘Better to be late for work than late for a court appearance which this driver deserves for total disregard of Highway Code.’

Greater Manchester Police said the incident had not been reported to them and they could not comment.