A motorist has shared shocking footage of him smashing head on into an abandoned car on the M61 while driving on an unlit stretch of the motorway.

BMW driver David Lingard, 53, said he thought he was ‘going to die’ during the split second before the 65mph smash last year.

In footage captured on his dashcam, the father-of-four can be seen moving into the far right lane to avoid two braking vehicles as torrential rain pours down.

All of a sudden an abandoned black car, which is parked across the lane, comes into shot – leaving Mr Lingard no other option but to plough straight into it.

Fortunately no one was in the stricken vehicle and Mr Lingard escaped the collision with serious but non life-threatening injuries.

He said: ‘I saw a car in front of me brake so I decreased speed and changed lanes to get out of the way as the conditions were wet and I wanted to be safe.

‘Then out of the darkness this car appeared from nowhere, I had no time to avoid it and just went straight into it.

‘As the crash happened I thought, “I’m going to die, I’m not going to make it out of this”, and then the airbags went off in my face.

‘Then I remember the car spinning around and being overcome with adrenaline.’

Mr Lingard managed to escape the wreckage to warn other drivers and then call his partner Janice Kitchen to tell her he loved her.

BMW driver David Lingard, 53, smashed into an abandoned car (pictured across the lane as Mr Lingard approaches) while driving in wet conditions on the M61 last December 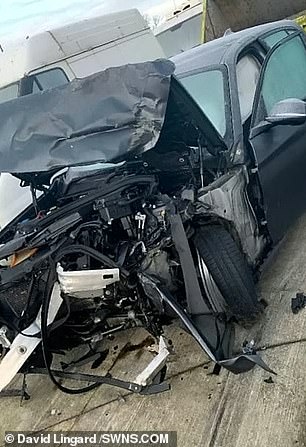 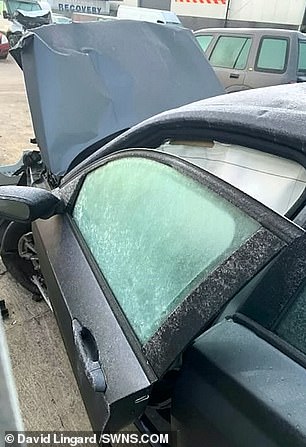 He said: ‘My whole body was in agony, the pain was unbelievable and I couldn’t breathe, I thought I had damaged my organs and was going to die.

‘I just wanted to call to tell Janice I loved her and that I love my kids and the dog.’

The crash happened on December 15 shortly after he had dropped some friends at Manchester Airport for a holiday in Tenerife. 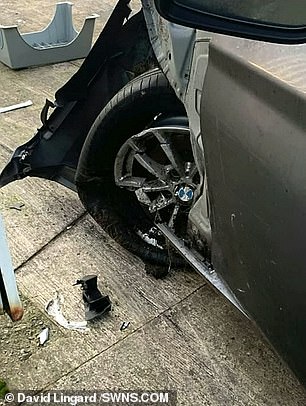 Mr Lingard is campaigning for better lighting on motorways, which according to him, would have prevented the crash. Damage on his car is pictured

Mr Lingard said the car he hit had been involved in an earlier collision and the driver was on the hard shoulder calling for help.

He was rushed to hospital following the collision and received treatment for injuries to his chest, a broken nose and broken knuckles before returning home.

Mr Lingard is now using his ‘lucky escape’ to campaign for better lighting on motorways, which according to him, would have prevented the crash.

He said: ‘Had there been lights on that road I would have seen the stationary vehicle and begun braking much earlier.

‘There may have been a minor collision but it would certainly not have been anywhere near as bad as it was.

‘I was incredibly lucky and so were the other road users that it wasn’t worse.

‘Hopefully what happened can shine a light on the issue – some stretches of motorway where accidents repeatedly happen need more lighting.’ 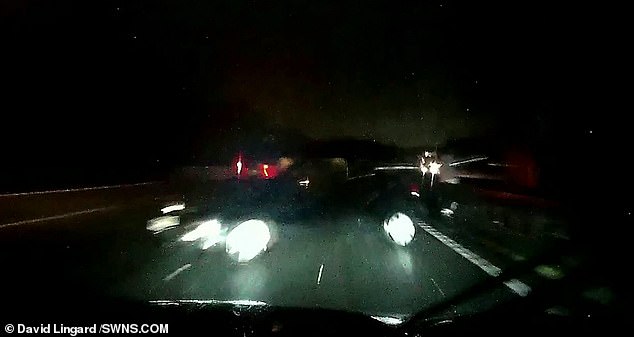