A daughter battling severe anxiety died from heart failure just days after her mother accidentally sent her hundreds of angry emojis on Facebook when she was trying to ‘like’ her posts, an inquest heard.

Shabina Miah, 33, uploaded a video to social media of her night at the circus but when her mother Angela saw it she tried to press the ‘like’ button.

But a problem with her iPad caused the angry emojis to appear instead and another glitch caused them to multiply.

Macclesfield Coroner’s Court heard this caused Shabina to block her mother online and refuse to answer her calls when she tried to explain.

Angela also told the inquest Shabina had been having problems with her relationships with ex-boyfriend Luke Tomlinson and current partner David Brown.

Shabina Miah, left, was found dead days after a row with her mother Angela, right, when she accidentally left angry emojis as a response to a video of Shabina at the circus

Angela, an operations manager, tried to visit her daughter’s home in Macclesfield a day later to explain what happened but ended up leaving after the pair argued.

Shabina was found dead in bed at her home the following day by her mother after she went to check on her following a work appointment.

Shabina, known as Shaz, had a history of medical issues including depression and diabetes and had previously taken two overdoses of insulin.

The inquest heard she had also had an on/off relationship with motorcycle technician Mr Tomlinson, whom she got engaged to in November 2018 and then broke up with in January, later starting a new relationship with Mr Brown.

Mr Tomlinson had moved back into the property two days before Shabina’s death and the pair had been sleeping in separate rooms.

Angela told the inquest: ‘On the Saturday night she had gone out to see a band and the following day she went to the circus with Dave.

‘My iPad was playing up and I saw she posted on Facebook a little video of part of the circus. I went to put a ‘like’ on it but an angry face came up. 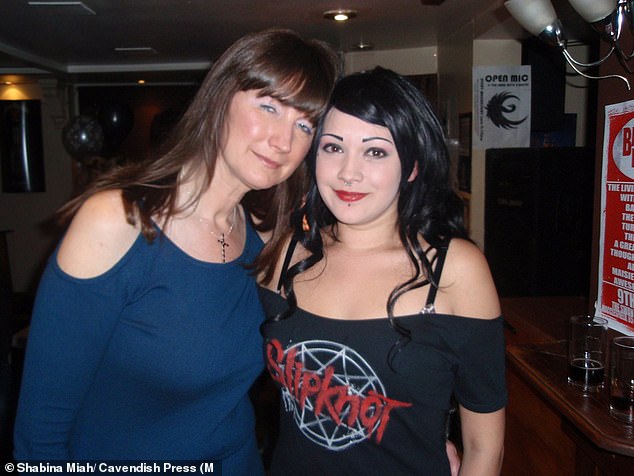 An inquest in Macclesfield heard anxiety sufferer Shabina, right, had blocked her mother, left, and refused to take her calls after the incident, which was caused by an iPad glitch

‘I pressed it again and it wouldn’t go. There were 100s of angry faces and she had taken it the wrong way.

‘She blocked me and I tried to ring her and text her but wouldn’t answer. I was upset that she was upset with me. Because she wouldn’t answer I went round and we ended up having an argument and I was very distressed.’ 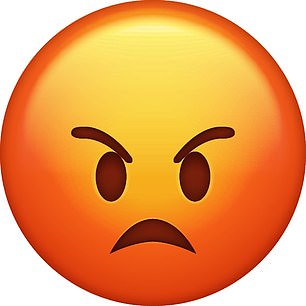 Angela told the inquest: ‘I went to put a ”like” on it but an angry face came up’

She added: ‘I left and thought I would let her calm down and speak to her the next day. Next morning I arrived at work and knew Luke would be going to work and I rang him before he left the house to check on her.

‘He phoned me back and I thought she was okay. But I later tried to ring her a couple of time and then asked her sister who was in Australia to see if she could contact her but I thought she was still not talking to me.

‘I started to get worried and looked on social media to see is she had been active she hadn’t been. At the time I was doing an induction for a new member of staff at work and I called a break and said I had to check my daughter’s alright.

‘I let myself inside, shouted and then I just went straight upstairs into bedroom and realised something was really wrong.

‘I was quite hysterical at the time and I knew that she had gone. The emergency man on the phone telling me to do CPR but I knew it was to late.’

Regarding Shabina’s relationships, Angela told the hearing: ‘In the last three to four years Shabina had met Luke and he had a positive effect on her life. 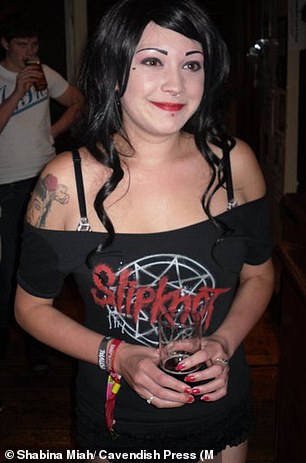 Shabina, pictured, was in a ‘very dark place’ leading up to her death, according to her mother

‘He was patient with her and looked after her but in January all seemed to change – her mental state more than anything she was out a lot and didn’t feel as close to me.

‘She was spending a lot of time with Dave and I thought something was going wrong and there was a problem with her relationship with Luke.

‘I tried to talk to her about it but she wasn’t in a very good place and I pressed her to start taking her anti depressant medication again.

‘During that last week of her life she started taking it again and got an appointment with a counsellor but see seemed very very confused and was in a very dark place.’

Mr Tomlinson said in a statement: ‘Just after New Year 2019 she started to deteriorate, acted strangely and confused and it was not like her.

‘She started to hang around with another man called Dave Brown. She started to stay out all night and she and I split up in January – she was cheating on me.

‘I still came round after work to see her and on February 9, I moved back – although me and Shabina had separate bedrooms and I didn’t really see her. On February 9, we went to the beach and that night she went out all night and didn’t return home and didn’t see her till the next day.

‘She said was going to the circus and I returned later that evening she was in the kitchen. 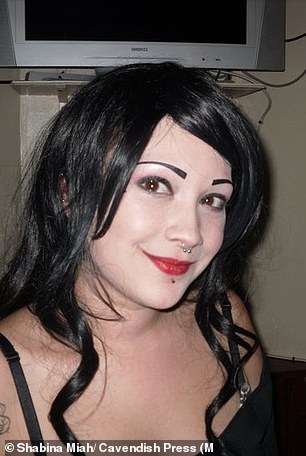 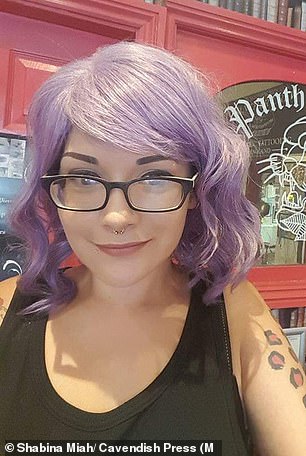 Shabina, pictured left and right, had a history of medical issues including depression and diabetes, and had taken cocaine before her death

‘I went to bed around 10.30pm. Later Shabina had an argument with Angela and it was irate. They went into the bedroom and she was trying to collect some belongings. Eventually Angela came downstairs and I heard Shabina slam her bedroom door.

‘That morning at 7am I walked the dog and Shabina was lying face down and crying.

‘Her mood was low and confused I put this down to speaking to the other man Dave Brown. She was not the person I knew.’

Tests showed Shabina had traces of cocaine in her system which may have caused her congestive cardiac failure.

Assistant Coroner Michael Wallbank recorded a conclusion of drug related death and said: ‘Mrs Miah said at around that time her daughter died she was in a very dark place and confused.’

He added: ‘It is clear Shabina had used cocaine prior to her death possibly to counter her state of mind but there is no evidence to suggest she took a particular excessive amount.’