‘All I want for my birthday… is to DIE’: The heartbreaking plea of 11-year-old daughter who is in constant pain due to incurable bladder condition

Imarni Chowdhury, 11, suffers from interstitial cystitis – a chronic disorder caused by deficiencies in the lining of the bladder

A girl who feels constant pain ‘like having third degree burns’ said she does not want to live to her next birthday.

Imarni Chowdhury, 11, suffers from interstitial cystitis – an incurable chronic disorder caused by deficiencies in the lining of the bladder.

The youngster, who also has epilepsy and narcolepsy, takes heavy doses of painkillers to deal with her condition as even passing urine can be excruciating.

Her father, Rahman Chowdhury, said she has ‘not had a childhood’ due to the extent of her pain.

He said: ‘She has not had a childhood. People have no idea the extent of the pain. It is like having third degree burns or Stage Four cancer.

‘When I asked her what she wanted for her birthday next week, she said she just wants to die.

‘She is so poorly, she has missed a lot of her school classes. We can’t do much as a family because we have to be beside Imarni constantly. All she can do is sit and watch cartoons on TV to take her mind off it.

‘She suffers from epilepsy and narcolepsy. She used to love dancing and swimming and riding her scooter and it is hard for her to see her siblings jumping into a hot-tub or out riding on their bikes.’ 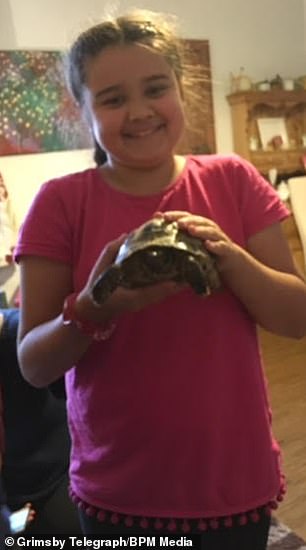 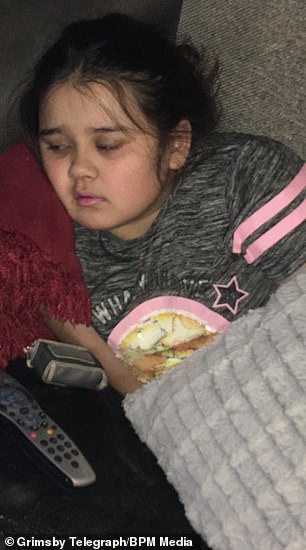 The youngster, who also has epilepsy and narcolepsy, takes heavy doses of painkillers to deal with her condition as even passing urine can be excruciating

Mr Chowdhury said his family have been told there is a special gel available that could alleviate some of his daughter’s pain.

But while specialists in Sheffield and Nottingham both agree this is available, they say it needs to be licensed so Imarni can be treated at home.

Mr Chowdhury said: ‘We have been written to by the NHS who say it can only be provided by our primary carer, which in our case is Grimsby hospital. But they say they do not have the training to do so.’

Imarni’s mother Susan, who suffers a similar condition, is treated at Diana, Princess of Wales Hospital in Grimsby. But the procedures she has access to aren’t available to her daughter due to her age.

Irmani has a tube fitted in her stomach that allows her to pass urine into a bag.

Mr Chowdhury said this has been prone to infections over the past year – and he worries she could ‘get sepsis and die’.

Her mother also said her daughter has been ‘passed from one department to another’ due to miscommunication at the hospital.

She said: ‘It has been going on too long. It seems there is miscommunication and we get passed from one department to another. 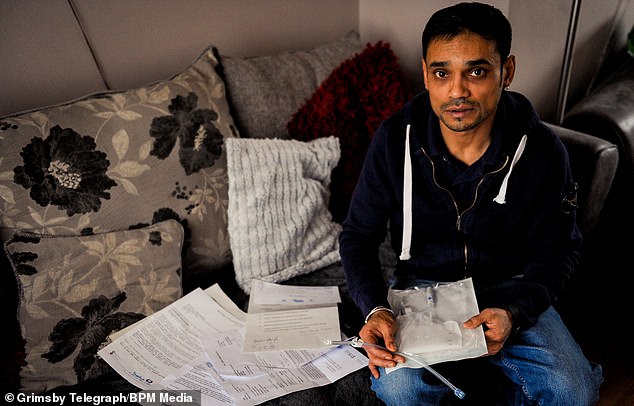 Her father, Rahman Chowdhury, said she has ‘not had a childhood’ due to the extent of her pain

‘It is so bad that she is terrified to go into hospital because she is in so much pain and knows all that has gone on in the past. It is difficult to explain to someone of such a young age. We want her to get the treatment she needs.

‘Nottingham said they sent a letter to Sheffield and to Grimsby. They said they had not received a letter. Then five weeks letter they say they have got a letter but they do not have licence for the treatment to give to a child. I have seen the treatment that my daughter needs.

‘The illness has no cure and most doctors don’t have the knowledge about it and no one understands the pain the illness causes. I had the nerves around my bladder burnt off so that they do not spasm.’

‘Sometimes this is because the specialist treatments we recommend are not always available elsewhere. We are doing all we can to coordinate with local, regional and national NHS organisations in order to support our patients as safely and quickly as possible.’