The daughter of exiled Afghan president Ashraf Ghani is living a luxurious lifestyle in New York City, while her father has been given asylum in Dubai on ‘humanitarian grounds’ after fleeing Afghanistan in a helicopter filled with $169million in cash.

Mariam Ghani, 42, lives in a loft in a luxury co-op in Brooklyn’s Clinton Hill neighborhood, the New York Post reported.

The visual artist and filmmaker, who was born and raised in America, is said to practice a bohemian lifestyle much different than that of women in Afghanistan.

When interviewed in 2015, the New York Times described her loft as a ‘map to her layered identity,’ featuring floor-to-ceiling shelves filled with books, embroidered pillows made by a collective in Aleppo, Syria, and a Turkmenistan rug gifted to her by her father. Her refrigerator was decorated with magnets touting motivational sayings and her kitchen shelves lined with green tomatoes she pickled herself.

‘I’m a Brooklyn cliché,’ she said at the time, commenting on her way of living.

Mariam Ghani (pictured in her apartment in 2015), daughter of exiled Afghan president Ashraf Ghani, continues to live her luxurious New York City lifestyle as her father remains in hiding after fleeing Afghanistan in a helicopter filled with cash 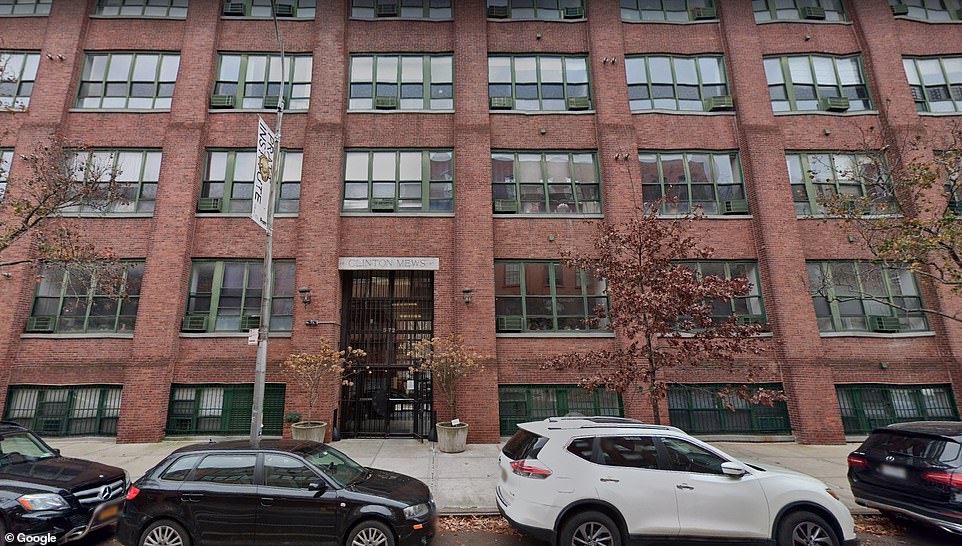 Ghani, who has refused to speak with reporters about the ongoing takeover of Afghanistan, is encouraging Americans to advocate for the Afghans whose lives have and continue to be impacted by the Taliban’s insurgence in the country.

She posted on social media Tuesday answering the question: ‘What can we do to help Afghans right now?’

Ghani, who says she is ‘angry, grieving and terribly afraid for [her] family, friends and colleagues left behind in Afghanistan,’ encourages US citizens to contact their elected officials asking to halt deportations of Afghan refugees and expedite Special Immigrant Visas.

‘To everyone who has checked in and reached out in solidarity over the past days: thank you. It has meant a lot,’ she wrote, noting that she is ‘working feverishly to do anything [she] can on their behalf’.

She says that, in addition to contacting elected officials, individuals can donate to or volunteer with several organizations who help refugees and displaced people. 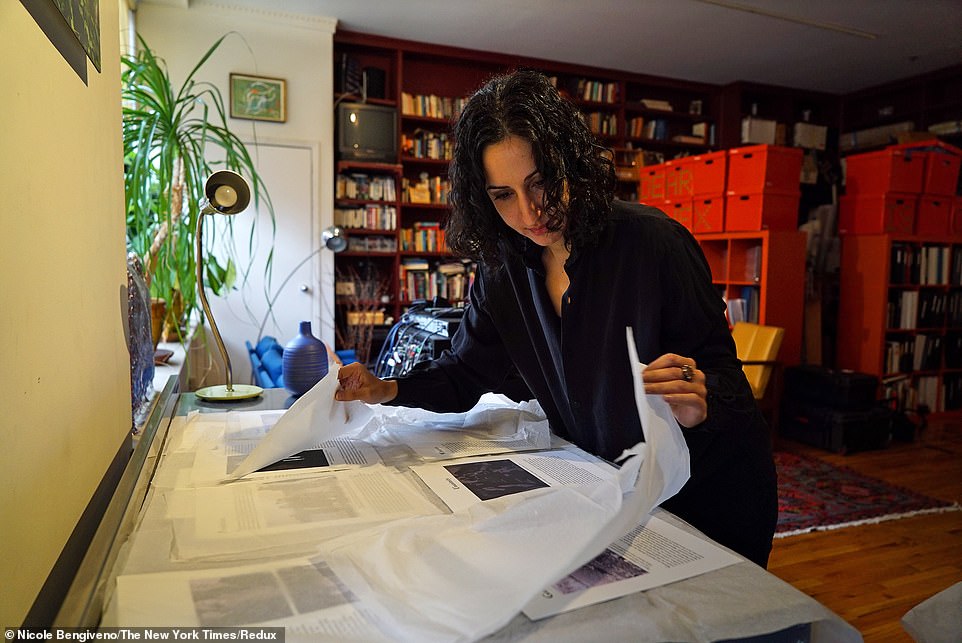 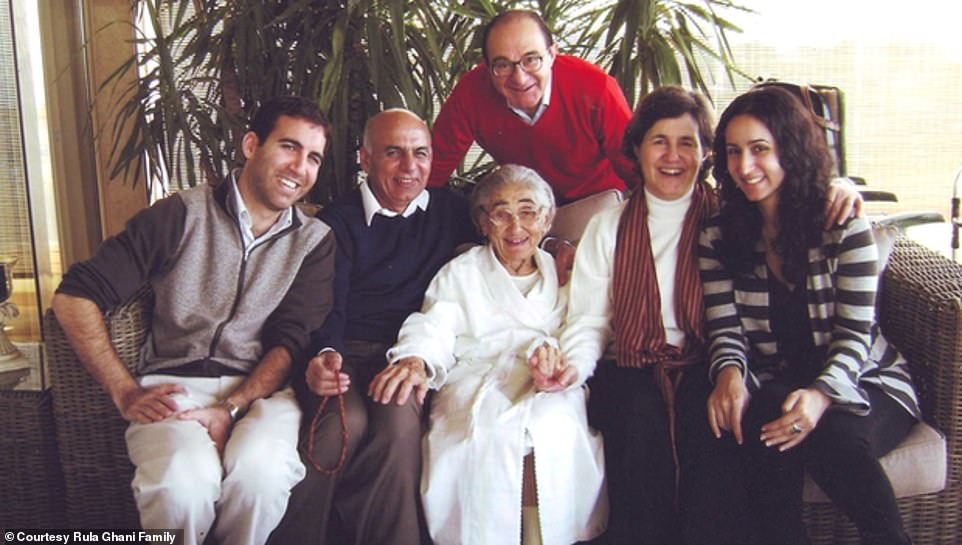 Rula (second from right) and Ashraf Ghani (second from left) with their children (Mariam Ghani on right), her late mother and brother Riad in 2012 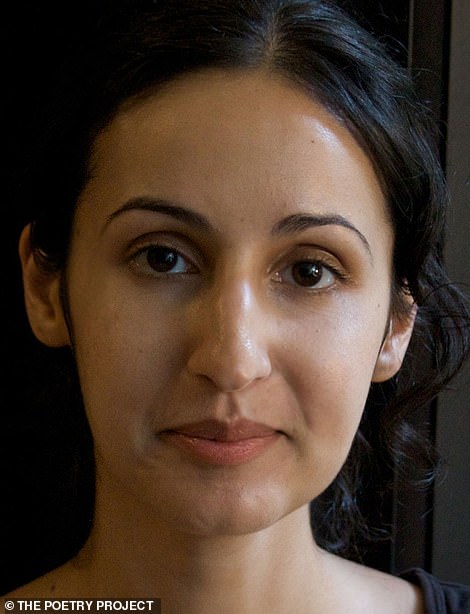 Ghani (pictured) was born in Brooklyn, raised in suburban Maryland and has spent her adult life launching an art and teaching career

Art institutions and coalitions can publicly advocate for cultural workers to be recognized as ‘urgently at risk under a Taliban regime,’ Ghani stated. She also urged foundations, art institutions and academic facilities to sponsor migration of at-risk artists, journalists and activists.

Ghani was born in Brooklyn, raised in suburban Maryland and has spent her adult life launching an art and teaching career.

Her work has been showcased in museums around the world, including the Tate Modern in London and the Guggenheim and MOMA in New York.

She studied at New York University and the School of Visual Arts in Manhattan. In 2018 she became a faculty member at Bennington College in Vermont.

Ghani grew up in exile and was unable to travel to Afghanistan until 2002 when she was 24 years old, according to her Guggenheim biography. However, her art was often inspired by the her family’s homeland and her multicultural upbringing.

Her father, who began working for the Afghan government in 2002, recently fled Afghanistan in secret as the Taliban took the capital city of Kabul.

Russia’s embassy in Kabul said on Monday that Ashraf Ghani had fled the country with four cars and $169million in his cash-stuffed helicopter. He reportedly had to leave some money behind as it would not all fit. 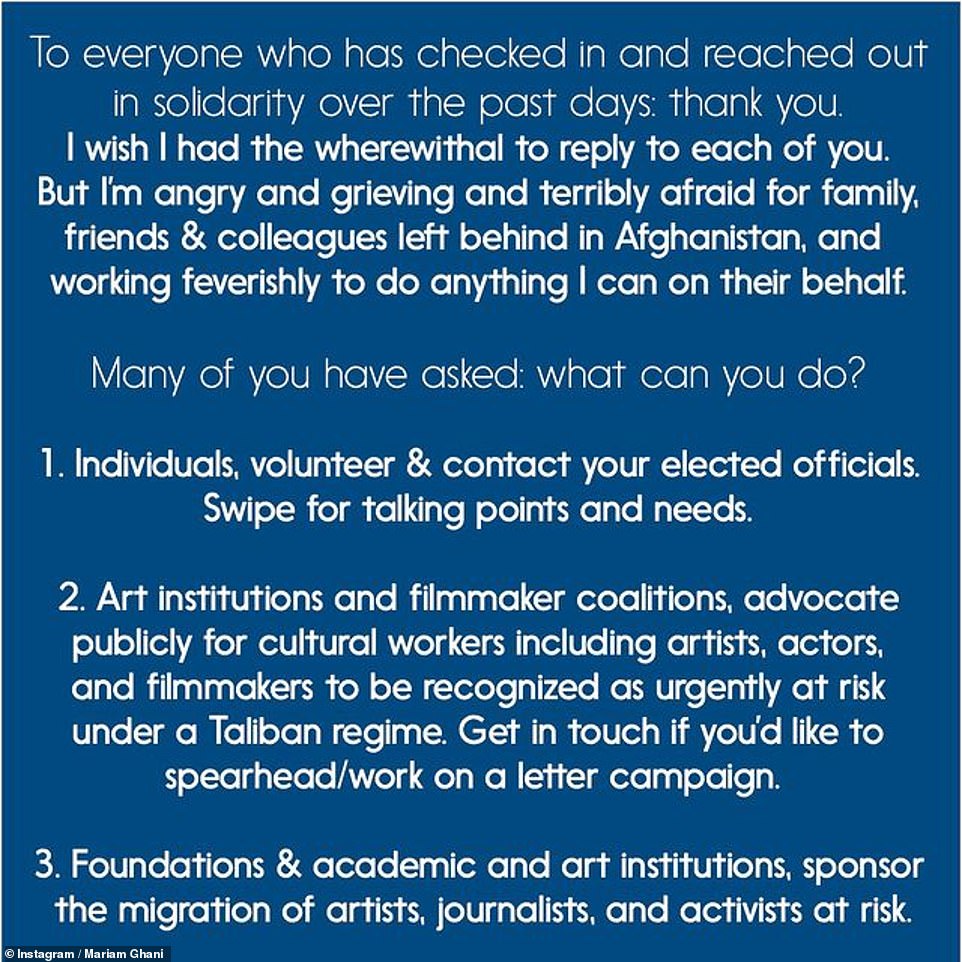 Ghani, who has refused to speak with reporters about the ongoing takeover of Afghanistan, took to Instagram (above) encouraging Americans to advocate for the Afghans whose lives have and continue to be impacted by the Taliban’s insurgence in the country 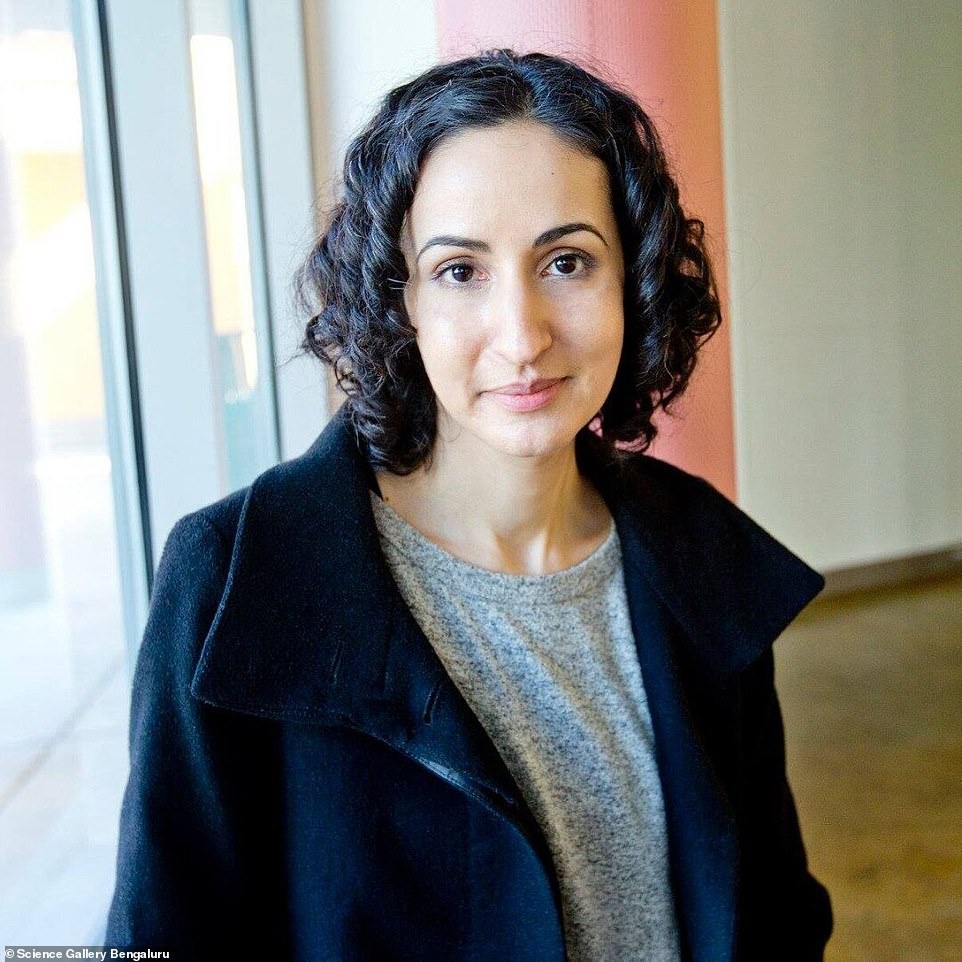 Ghani (pictured) said she is ‘angry, grieving and terribly afraid for [her] family, friends and colleagues left behind in Afghanistan’ and encourages US citizens to contact their elected officials asking to halt deportations of Afghan refugees and expedite Special Immigrant Visas

Ashraf has been given asylum in Dubai on ‘humanitarian grounds’, it has emerged.

Nikita Ishchenko, a spokesman for the Russian embassy in Kabul, described the scene of Ashraf’s flee: ‘Four cars were full of money, they tried to stuff another part of the money into a helicopter, but not all of it fit. And some of the money was left lying on the tarmac.’

‘As for the collapse of the (outgoing) regime, it is most eloquently characterized by the way [Ashraf] fled Afghanistan,’ Ishchenko continued.

Ashraf escaped Afghanistan on Sunday night as the insurgents encircled the capital – saying he wanted to avoid bloodshed – capping a military victory that saw them capture all cities in just 10 days.

Earlier reports said Ghani had fled to Uzbekistan, citing Russian Embassy sources. It was also claimed to former president had flown to Tajikistan, but diverted to Oman when officials in Dushanbe refused him permission to land.

But the United Arab Emirates confirmed Tuesday that it was hosting Afghan president Ashraf Ghani in Dubai ‘on humanitarian grounds’. 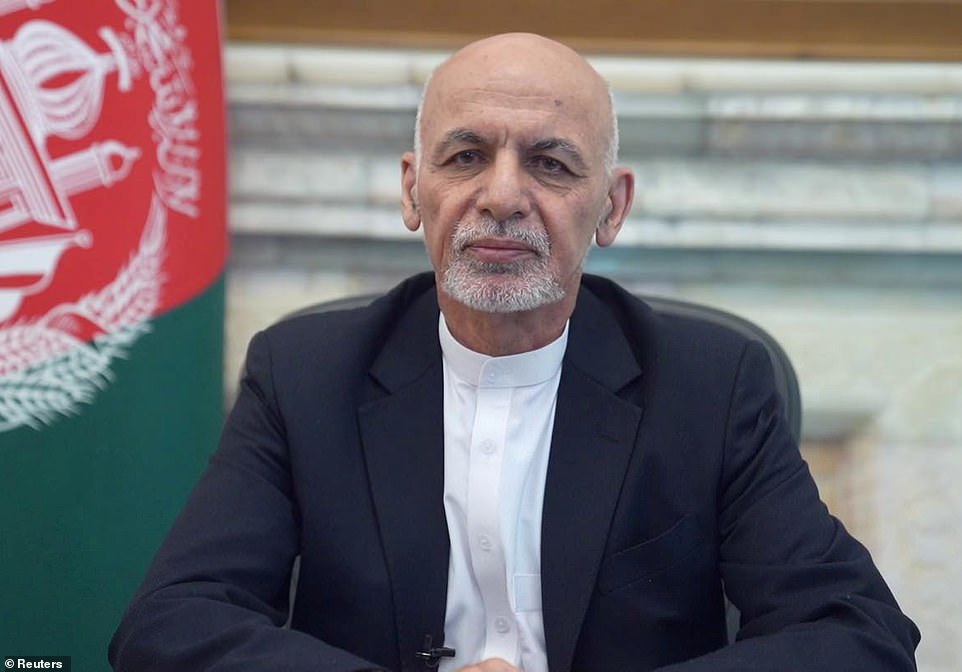 Ashraf Ghani (pictured) had fled Afghanistan on Sunday with four cars and a helicopter full of cash. Officials said he had to leave some money behind as it would not all fit in the chopper 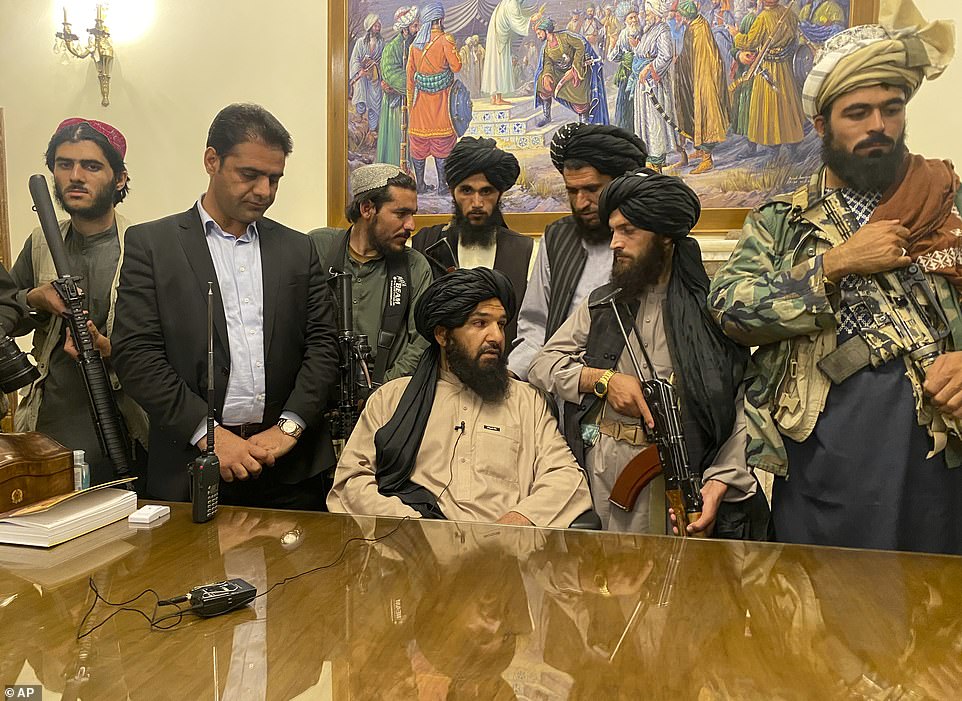 He said in a a Facebook post on Sunday, that he left Afghanistan because he wanted to avoid bloodshed and clashes with the Taliban that would endanger millions of Kabul residents.

‘Dear countrymen!’ he wrote. ‘Today, I came across a hard choice; I should stand to face the armed Taliban who wanted to enter the palace or leave the dear country that I dedicated my life to protecting and protecting the past twenty years.

‘If there were still countless countrymen martyred and they would face the destruction and destruction of Kabul city, the result would have been a big human disaster in this six million city.

‘The Taliban have made it to remove me, they are here to attack all Kabul and the people of Kabul. In order to avoid the bleeding flood, I thought it was best to get out.’

Taliban officials have since said they have received no reports of any clashes anywhere in the country: ‘The situation is peaceful,’ one official said. The Taliban controlled 90 percent of state buildings and fighters had been told to prevent any damage, the official added. 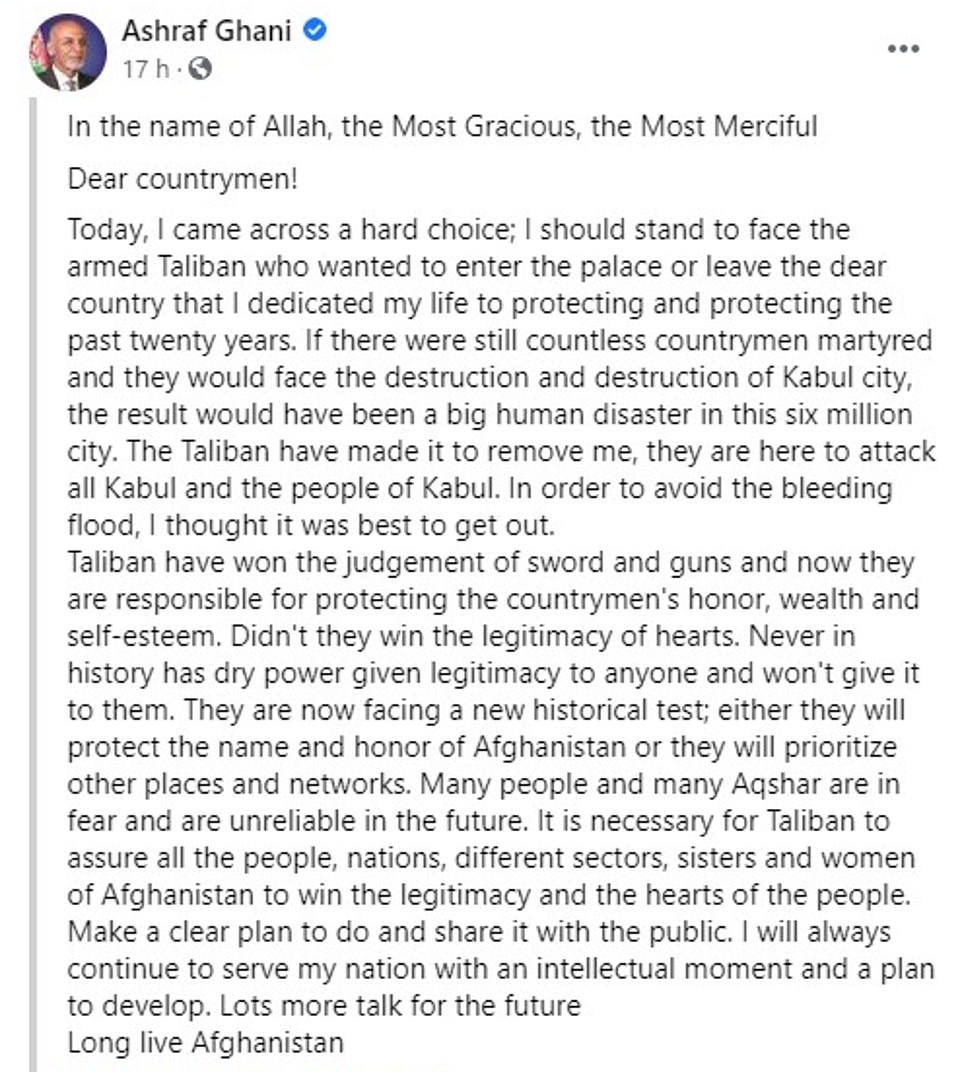 In a Facebook post on Sunday (pictured), Afghanistan’s President Ashraf Ghani said he fled the country because wanted to avoid bloodshed

New York Post reporters confronted Ghani at her Brooklyn home, asking for comment on the ongoing situation overseas. She refused to answer their questions, leaving it unclear if she has heard from her father or knows where he is.

However, when asked about her father in 2015 — refusing to comment on anything that could compromise his political position — she referred to him as a ‘remarkable person’.

Ghani, who claims she ‘grew up very much in between cultures’ and uses that as the position she works from artistically.

One of her most recent works, a documentary film titled What We Left Unfinished, explored five Afghan motion pictures that were started and abandoned during the nation’s Communist era. The documentary is currently playing in select theaters nationwide. 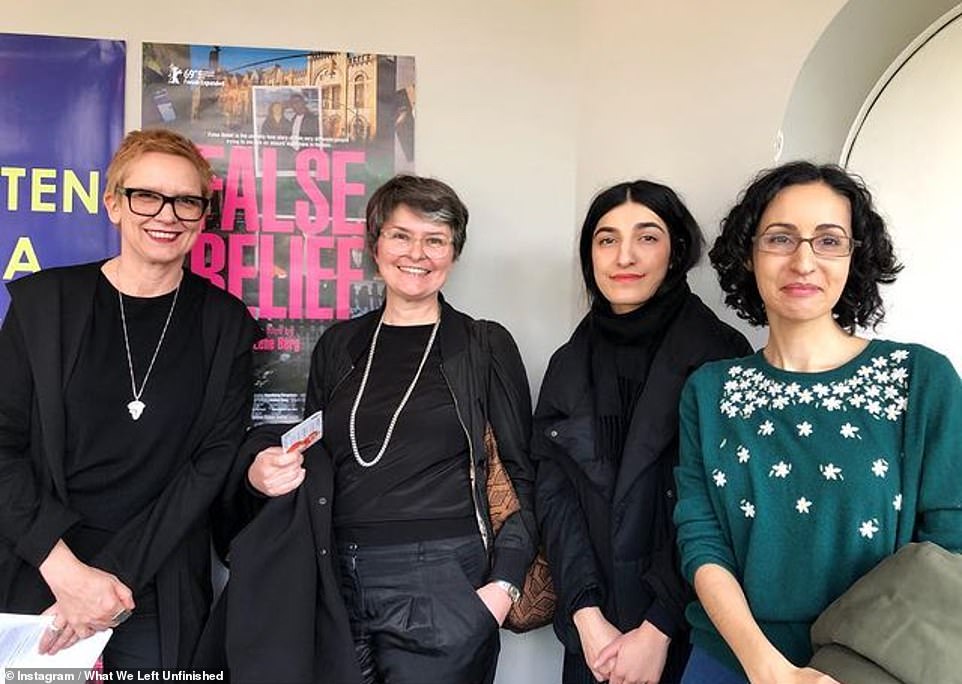 Ghani (right) is described as a ‘feminist, archivist and activist’. She recently released a documentary film (picture above from film’s Instagram account) exploring five Afghan motion pictures that were started and abandoned during the nation’s Communist era 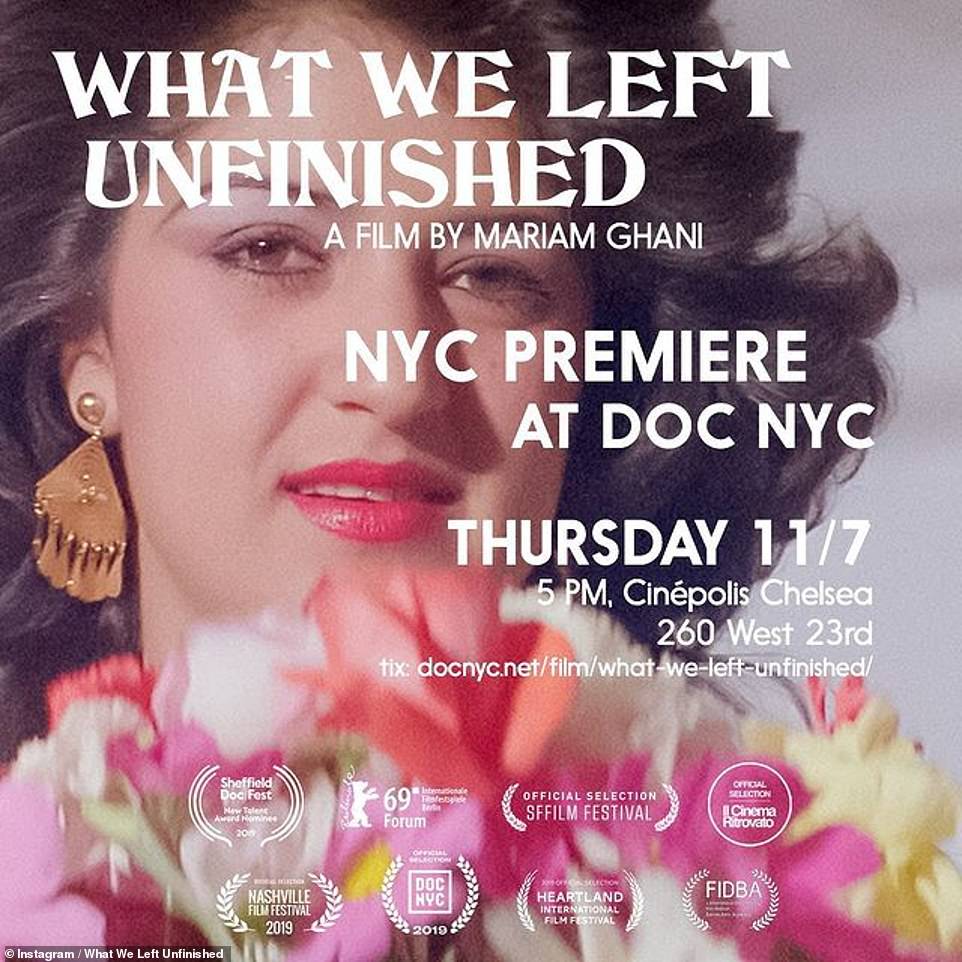 In the 2015 New York Times profile piece, Ghani is described as a ‘feminist, archivist and activist’ who was ‘as well-versed in the politics of extraordinary rendition as she is in the very Brooklyn pursuit of homemade chile-passion-fruit sorbet’.

‘One of the reasons I wanted to be an artist is because I saw that by being an artist I could be so many other things as well,’ she said at the time.

She taught classes in Kabul and hired women to work on her sets and serve as research assistants for her projects.

Now, as the Taliban becomes the recognized ruler of Afghanistan, women say they fear what’s next to come.

Under the Taliban, which ruled in accordance with a harsh interpretation of Islamic law, women were largely confined to their homes.

Older generations of Afghans remember their ultra-conservative Islamic views, which included stonings, amputations and public executions during their rule before the US-led invasion that followed the September 11, 2001 terror attacks. 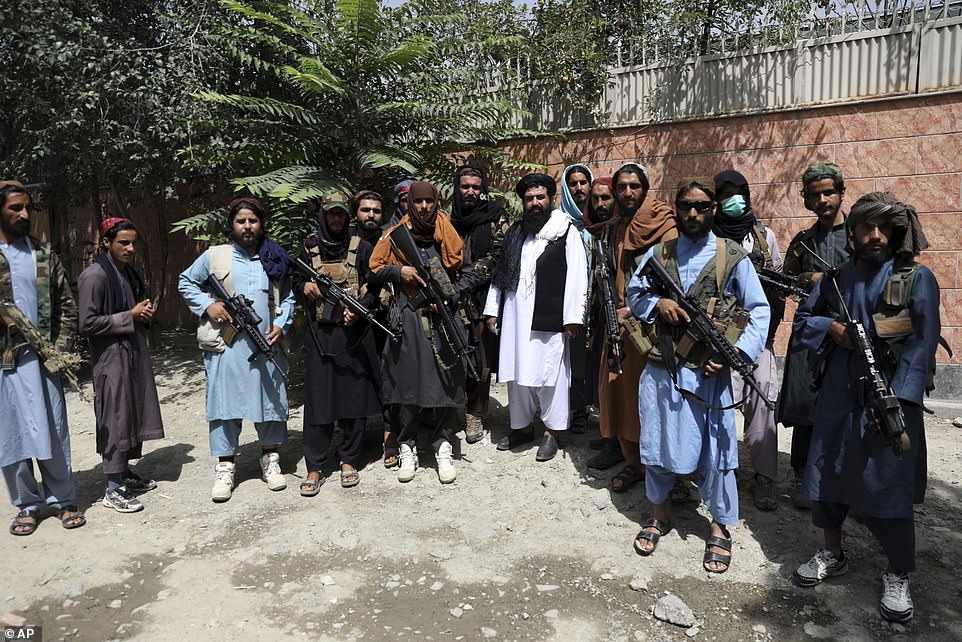 The Taliban is now the recognized ruler of the Afghanistan. Pictured: Taliban fighters posed for a photograph in the Wazir Akbar Khan neighborhood of Kabul on Wednesday, Aug. 18, 2021

‘The Islamic Emirate doesn’t want women to be victims,’ Enamullah Samangani, a member of the Taliban’s cultural commission, said Tuesday.

‘They should be in government structure according to Shariah law.’

He added: ‘The structure of government is not fully clear, but based on experience, there should be a fully Islamic leadership and all sides should join.’

Samangani remained vague on other details, however, implying people already knew the rules of Islamic law the Taliban expected them to follow.

‘Our people are Muslims and we are not here to force them to Islam,’ he said.

The insurgents have sought to project greater moderation in recent years, but many Afghans remain skeptical.

One Afghan resident, whose identity remains anonymous, wrote an article published in The Guardian outlining her fears.

‘As a woman, I feel like I am the victim of this political war that men started,’ she said.

She explains that she is concerned for that women will once again ‘be deprived of all basic rights’.

‘When I heard that the Taliban had reached Kabul, I felt I was going to be a slave. They can play with my life any way they want,’ she wrote.

‘I did not expect that…after 20 years of fighting for our rights and freedom, we should be hunting for burqas and hiding our identity.’

Afghan women say they fear what’s next to come amid the Taliban insurgence. Pictured: Afghan women, holding placards, gather to demand the protection of women’s rights in front of the Presidential Palace in Kabul, Afghanistan on August 17, 2021

Women were under extreme restrictions regarding behavior, dress and movement. Those who did not adhere to the rules were whipped and publicly humiliated.

If a woman was accused of adultery she would be stoned to death. Homosexuality was considered a crime and punishable by death.

Girls were not permitted to receive an education so women teachers would set up secret schools in their homes.

Women in the medical field did continue to work but had to do so in establishments segregated by sex.

‘I am a journalist and I am not allowed to work,’ said television Khadija Amin who claims the Taliban had indefinitely suspended her and other female employees.

‘What will I do next? The next generation will have nothing, everything we have achieved for 20 years will be gone. The Taliban is the Taliban. They have not changed.’

At this time it is unclear what life will look like for Afghan women under the new Taliban rule, however, some say they will fight before allowing the new government to take away the rights earned over the past two decades.

‘The Taliban has never seen or experienced women going to work and going to school in large numbers,’ argued Afghan women’s rights activist Wida Saghary. ‘We must resist them and go to work and go to school. Women can’t cave in.’