Daughter of nurse, 60, killed by coronavirus says public should carry on staying at home

An ‘exceptional’ mother-of-four nurse who devoted her life to terminally-ill children has become the latest healthcare worker to be killed by coronavirus.

Eyitolami Olaolorun had been a nurse for 40 years, most recently working at Wellington Hospital, a private centre in St John’s Wood, caring for young patients who were critically or terminally ill.

Ms Olaolorun, 60, also worked for the NHS at various hospitals and raised her four children by herself, having arrived in the UK from Nigeria almost 20 years ago after splitting with her husband.

Her daughter has encouraged the public to keep to the Government’s original rule of staying home to save lives.

Oyinkansola Honey Iloba described her mother, who died on April 16, as ‘selfless and ‘an exceptional woman’.

‘She didn’t see her patients as just someone she was looking after, they were family,’ the 32-year-old said.

‘There’s a picture of one of her patients on her wall. He’s pretty much our adopted younger brother because of how she saw him.

‘She would spend Christmas with us and then spend it with her patients too, and always remembered birthdays.

‘She raised all four of us by herself. We’re all graduates, we’re all doing well. That’s all because of her, she sacrificed everything for us.’

On Sunday, Prime Minister Boris Johnson relaxed the Government’s ‘stay home, protect the NHS, save lives’ slogan to instead tell people to ‘stay alert, control the virus, save lives’.

After the death of her mother, Mrs Iloba said: ‘Stay home. When it hits home, you realise how dangerous the situation is.

‘You realise, yes, the NHS are heroes but let’s not put their lives at risk as well.

‘Let’s not be selfish in our expectations of the NHS by going out, irrespective of what Mr Johnson has said, let’s not go out and think we’re immune to anything – we’re not.

‘By going out you’re putting doctors’ and nurses’ lives at risk and they have families … families who care for them, families who love them and families who want them to survive this pandemic.

‘You just need to stay home.’ 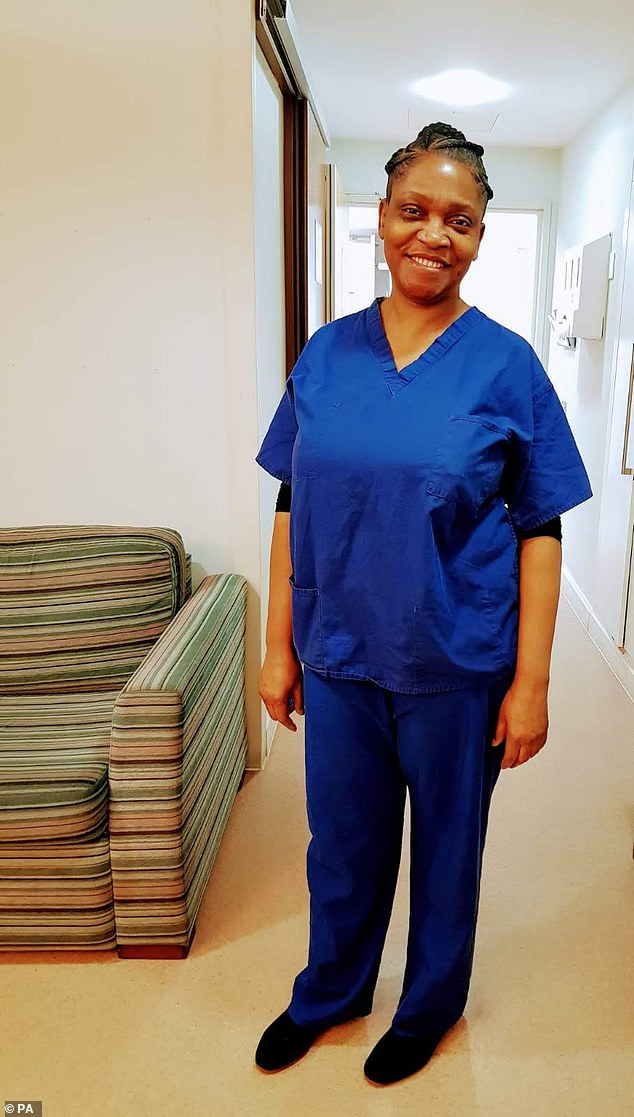 Ms Olaolorun started showing symptoms of Covid-19 in late March and was taken to hospital, before being put onto a ventilator on April 6.

‘I called her and she was crying,’ Mrs Iloba said.

‘I realised something was wrong and got my sister who is a doctor to call the hospital… they explained she would be put on a ventilator and sedated.

‘She must have been told already but she was trying not to tell us so that we wouldn’t be worried.

‘We called her back in a four-way call on WhatsApp – She said ‘I’ll see you guys later they’re just wheeling me off’ we said ‘alright I’ll see you soon’ and that was the last thing we said to her.’

Ms Olaolorun was put on a ventilator before being moved from Ealing Hospital to Charing Cross Hospital, where she died ten days later.

Ms Olaolorun’s children have made a GoFundMe page and foundation in their mother’s name to help young people in Nigeria to access higher education.