Comedian Dave Chappelle surprised his audience in Ames, Iowa Monday night by bringing his endorsement of 2020 hopeful Andrew Yang to life – welcoming the presidential candidate to the stage at the end of his set.

‘Andrew Yang is my mother f***ing man,’ Chappelle exclaimed, joking that he’d take the $12,000 annual ‘Freedom Dividend’ – the centerpiece of Yang’s campaign – even though he’s rich.

Chappelle was performing what was supposed to be a solo show on the campus of Iowa State University.

Earlier, Chappelle told DailyMail.com how he became a member of the so-called ‘Yang Gang.’

‘I called a friend of mine after the first debates … I didn’t see the debate. I said “who’d you like?” He said, “I liked the Chinese guy.” I thought he was joking. And he told me about Andrew Yang,’ Chappelle recalled. 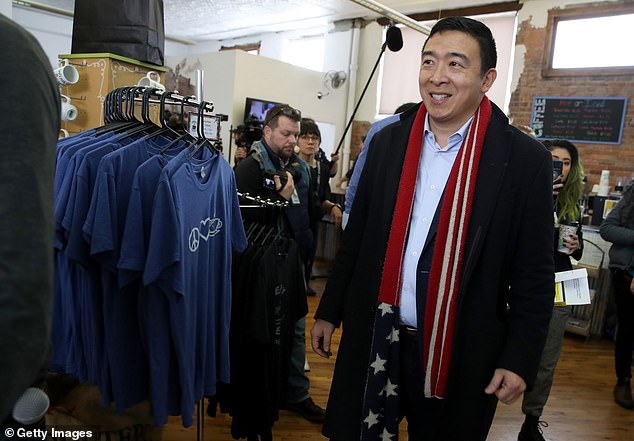 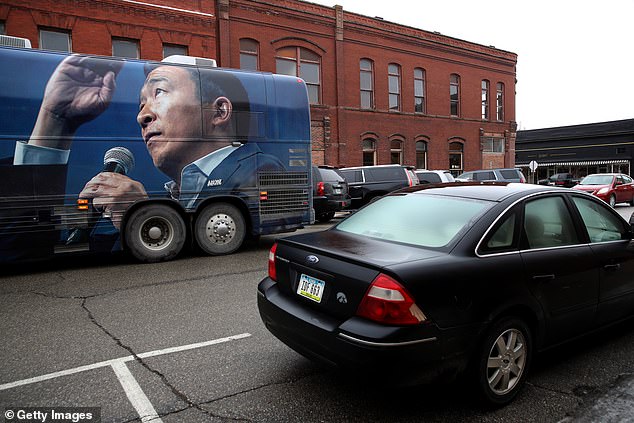 Chappelle soon had his hands on Yang’s book, ‘The War on Normal People.’

‘I couldn’t believe what I read,’ Chappelle said, and he asked his wife to get ahold of Yang’s campaign. ‘I found him to be something that’s real hard to be as a candidate – he was inspiring,’ Chappelle said.

The duo first met in December on the sidelines of the Los Angeles Democratic debate. Chappelle said he was ‘vetted’ by Yang’s campaign, while Yang admitted to being a big fan. ‘Dave is such a profound thinker in so many ways,’ gushed Yang.

Yang said the two clicked when talking about their kids – and a brief meeting turned into something more substantial.

‘His narrative and the courage it took for him to be the first Asian-American, with a real go of a presidential race – and I believed him,’ Chappelle listed as why he found Yang compelling.

Chappelle also pointed to what Yang’s signature policy – universal basic income, which he calls the ‘freedom dividend’ – could do for the people where he lives in Dayton, Ohio.

‘If you take a poll in Dayton and say what would you rather have, $12,000 or a year or health insurance, everyone’s taking the money. Like health insurance is great, but groceries are necessary too,’ Chappelle explained.

‘The Chappelle Show’ host noted how the wealth disparity between he and his neighbors is ‘immense.’

‘It’s heartbreaking. And if you know that a third of the people up the street can’t buy groceries then you start to feel an imperative concern,’ he explained. 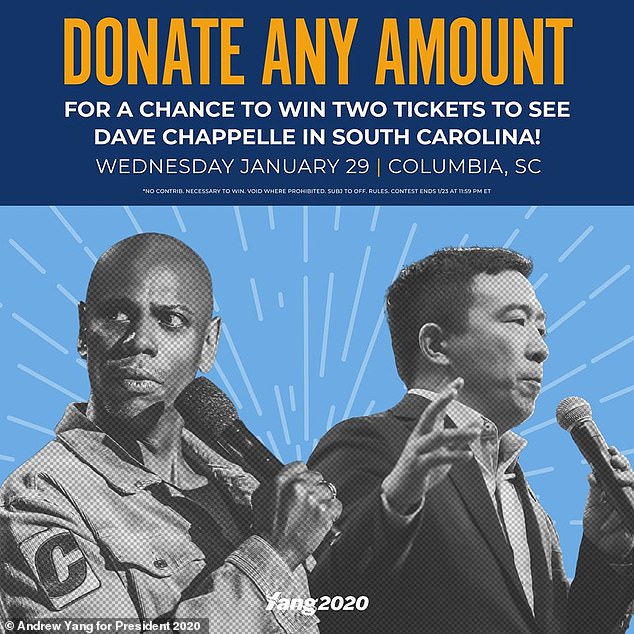 On Wednesdsay, Dave Chappelle (left) will travel to South Carolina and put on shows two nights in a row on behalf of Andrew Yang’s (right) campaign

Yang’s ‘freedom dividend’ gives Americans over 18 $1,000 a month and they can do whatever they want with it.

‘This would alleviate a lot of the bad feelings in the country, almost immediately,’ Chappelle told the small group of reporters gathered at Stephens Auditorium. ‘It’s an important idea and for some reason I feel like it didn’t get the appropriate media coverage.’

‘I don’t look at Trump’s supporters as my enemy at all,’ Chappelle said. ‘I understand why people vote for Trump. I understand people are desparate and I think Andrew’s right, you run against the reasons Trump got elected.’

Chappelle talked about having friends and fans on both sides of the aisle, and noted that it sometimes can’t taint a performer’s career to openly back a candidate.

‘But this idea is so good that I think it should exist,’ he said. ‘What I’m trying to do is make people aware of an option that I think is fantastic. People are always going to do what they want to do. I don’t want to be insulting to people – I’m a nightclub comedian, that’s what I do.’

Chappelle even admitted that he didn’t know anything about Iowa’s caucus process.

While onstage with Yang he asked the audience when it was, to laughs.

The Iowa caucuses are held Monday.

‘I’ve asked locals about it and they say it’s like playing musical chairs,’ Chappelle said. ‘But I know it does set the tone for the rest of the election.’

Chappelle will move on to South Carolina – the fourth state that votes – and do back-to-back comedy shows that benefit the Yang campaign Wednesday and Thursday.

His Tuesday night show at Iowa State University wasn’t part of the campaign effort, which is why Yang’s appearance was a surprise.

‘I just appreciate the hell out of him,’ Yang said of Chappelle’s endorsement.