A TV personality told how Dave Lee Travis groped her for his ‘weird sexual thrill’ backstage at the Mrs Merton Show.

She fled to her boss, BBC producer Peter Kessler, and told him: ‘Oh my God, Dave Lee Travis just grabbed my t*ts’.

Comedian Dave Gorman, who was a writer on the show, said he remembered hearing that the incident was ‘aggressive’ and not a ‘playful’ act

But no official complaint was ever lodged at the corporation which has come under fire for turning a blind eye to Jimmy Savile’s abuse of girls and boys on their premises.

Travis had a reputation for being a ‘bit of an octopus’ at the BBC studios in Manchester because he had ‘hands that go everywhere’, the woman said.

She was working on the spoof chat show when the ‘Hairy Cornflake’ cornered her in the corridor in the mid-1990s.

Seeing the victim, who was in her early 20s at the time, Travis chastised her for smoking.

He told her: ‘You shouldn’t be smoking think about what it is doing to your poor little lungs’.

Travis then touched her ribcage before sliding his hands up to her breasts in a ‘squeezing grope’.

The assault which ‘felt like ages’ lasted for 10-15 seconds before the ‘shaking’ victim escaped his clutches.

‘It was the weirdest thing that had happened to me,’ she said.

Comedian Dave Gorman said he had later heard that Travis had ‘grabbed’ the woman’s breasts.

He told the court: ‘My feeling was, if you think back to that time, the idea we’d call the police and say ‘Dave Lee Travis grabbed (the woman’s) t***’, it wouldn’t have gone anywhere.’

Travis was accused of assaulting a stage hand at the Hawth theatre in Crawley, West Sussex, where he was playing Aladdin’s evil uncle, Abanazar, in a pantomime in 1990.

The crew member said he pinned her to a door and ‘engulfed’ her, touching her ‘from top to toe’ as he towered over her.

She told how she felt ‘shaken up’, ‘humiliated’ and ‘scared’ after being cornered by the former DJ. 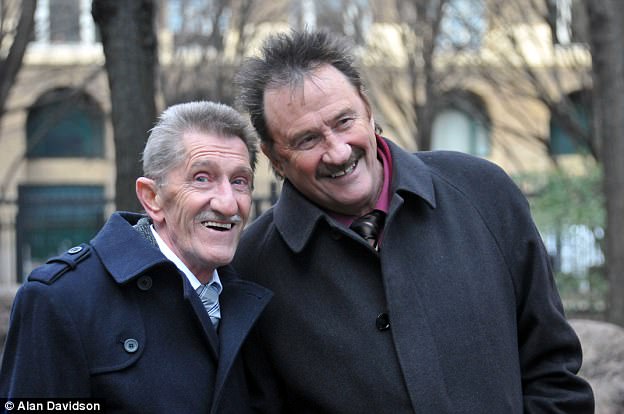 The Chuckle Brothers, real names are Paul and Barry Elliott, said they had not heard about the claims

The Chuckle Brothers, who shared the bill alongside Travis in the production, said they had never heard about the alleged attack.

The comedy duo, whose real names are Paul and Barry Elliott, said it was a complete shock when the allegations later emerged.

Paul Elliott told the jury: ‘The first that I heard about it was in the newspapers and it was a complete shock.’

He also dismissed claims that female staff had to be chaperoned around the venue and were advised to stay away from Travis’s room.

He said: ‘[I] never saw anything like that. We were sharing the bill and we would have been told of anything that was going on.’

Travis was cleared by the jury of this charge. 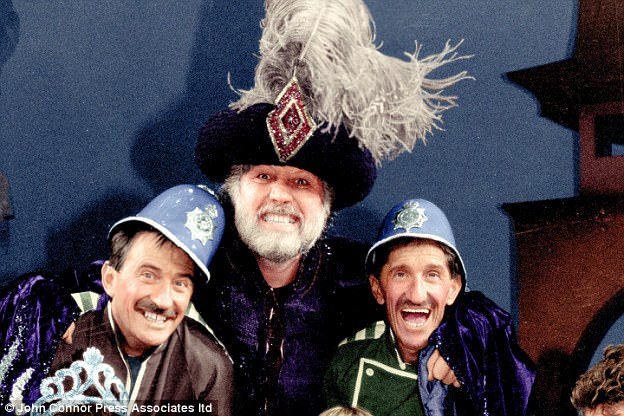 The pair starred alongside Travis at the Hawth theatre in Crawley, West Sussex, at the time of one alleged assault, which Travis was cleared of today

A national newspaper reporter told the how Travis grabbed her breasts after pestering her strip off for a photo shoot at his home.

Travis was said to have invited the 24-year-old to his home to reminisce about a Radio 1 Christmas party with stars including Jimmy Savile and John Peel, for a nostalgia feature.

He allegedly told the young woman she had a ‘good figure’ during his first attempt at persuading her to pose for a ‘tacky’ picture.

When Travis again tried to talk her into a photo shoot, she desperately tried to put him off by blurting out ‘my boobs are not big enough’.

The woman claimed Travis then kept his hands on her breasts for four seconds before pulling them away and carried on as if nothing had happened.

She added that she could ‘see it in his eyes’ before Travis groped her, and that he ‘took his chance’.

The jury failed to reach a verdict on this charge and a not guilty verdict will be recorded.