By Political Correspondent For The Daily Mail

Sir David Attenborough has waded into the Brexit debate, saying people are ‘irritated’ with the European Union’s ‘silly’ interference in British affairs.

The broadcaster and natural historian, 93, said: ‘The ways in which the European community has interfered with people’s lives on silly levels or silly issues has irritated a lot of people.

‘They’re just fed up with somebody over there who doesn’t speak their language, telling him how much money they’ve got to charge for tomatoes or something silly.

‘Maybe the EU didn’t pay enough attention to what sort of things members care about and have allowed themselves to do all sorts of things which irritate.’

Sir David did not say how he voted in 2016 but when asked whether he was more Brexiteer or a Remainer he said: ‘I think there had to be a change, one way or another. 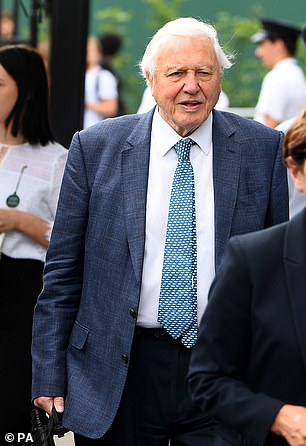 The broadcaster, pictured at Wimbledon, refused to say how he had voted in 2016

‘I am old enough to remember the last war. We had German Jewish refugees living in our house throughout the war.

‘When I see mobs.. mobs of people are a very, very ugly sight. And when I see people losing reason and just becoming enraged, that’s not a pretty sight.

‘And I just hope to goodness that people remember the lunacy that overtook Europe years ago… dreadful.’

In a wide-ranging interview he was also asked if he was concerned about the future of Britain.

He responded: ‘Yes. […] Our political system has got itself into this mess, this absurd mess. I just I don’t know what’s going to happen.’

Sir David said that he had been talking about the problem of plastic in the sea for 20 years, including in the Blue Planet series but said people didn’t take any notice.

This ‘suddenly’ changed for some reason, he said.

He also warned that as the world was ‘going to hell’, Britain was occupied with ‘silly squabbles about Brexit.’