Inter Miami needed nothing less than a win to keep a faint chance of making the play-offs alive and star of the season Gonazalo Higuain duly delivered.

David Beckham’s MLS team were locked 1-1 at home with rock-bottom Cincinnati at half-time knowing that a win was required to keep their postseason charge alive.

But Phil Neville’s side fought of the frayed nerves at Fort Lauderdale to battle to a thumping 5-1 victory thanks to top earner Higuain.

The 33-year-old found the net and recorded two assists in a dramatic second-half to earn a congratulatory hug from Beckham following his Man of the Match display.

Higuain proved why he is pocketing £4.1million-a-year with his masterclass and will be sorely missed by the Florida outfit if he follows through on his plan to quit the team at the end of a rollercoaster season.

And, although he may not be in firing form every game, Higuain showed the manager that he still has the magic touch. 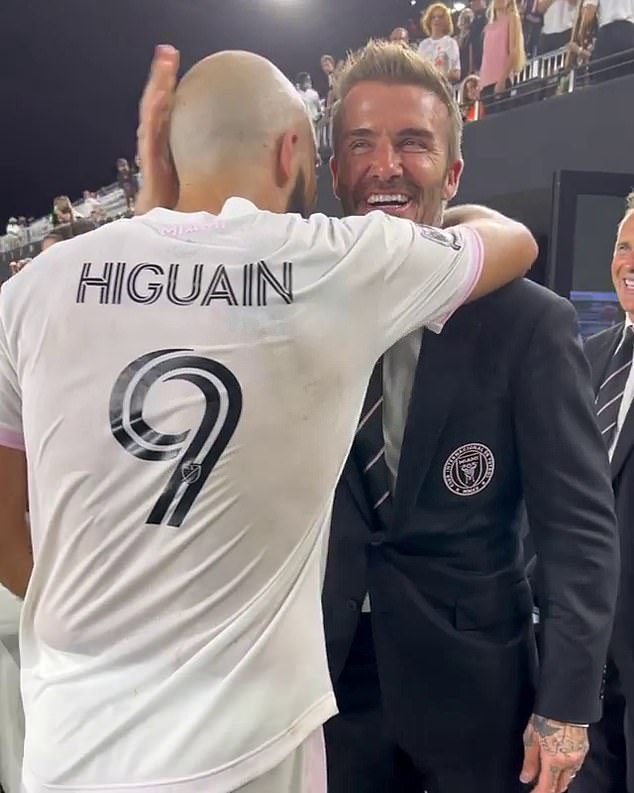 ‘Yes he’s been there and done it but I learned at Manchester United that even the best players in the world suffer from dips in confidence and don’t like criticism,’ said Neville, via The Sun.

‘When I went to Everton I remember talking about it with some of the lads there.

‘They have the same insecurities as everyone else. They are human beings.

‘I was going to take Gonzalo off but he looked like he was having too much fun. We need that world class performance from him again. He cares almost too much sometimes and defeats hurt a lot. 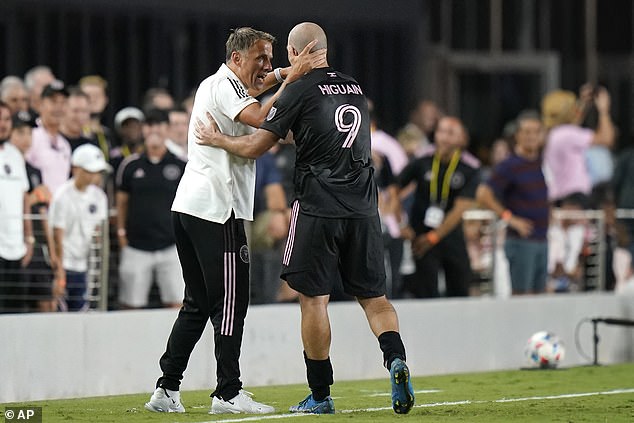 ‘We’ve had to work hard with him on that. It can be tough for a Designated Player who feels they are carrying the team.

‘But when he plays well, we tend to play well.’

Miami got off to the perfect start on Saturday as Lewis Morgan and Higuain cut through midfield to set up Rodolfo Pizarro.

But the side stalled in their charge as they missed several chances before the break, allowing Cincinati’s  Brandon Vasquez to level on 20 minutes.

The Higuain brothers Gonzalo and Frederico crucially combined on 53 minutes to provide Miami with a much-needed fast start to the second-half and restore their lead.

Former Aston Villa midfielder Indiana Vassilev lashed home from eight yards to keep Miami in the postseason hunt before Morgan and Julian Carranza’s first of the season completed the rout. 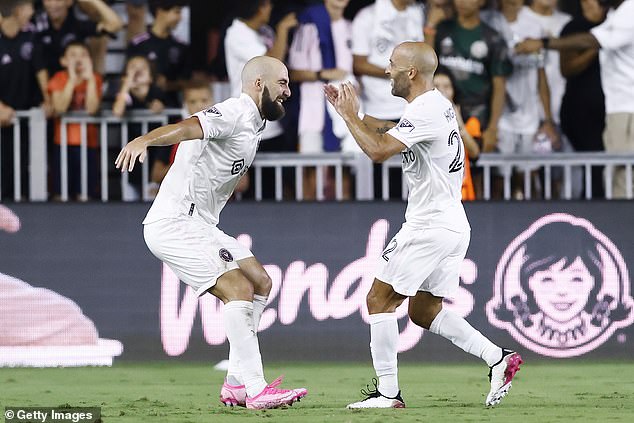 Despite the resounding win, Miami only have three games left to gatecrash the top seven, including a trip to runaway Eastern Conference leaders New England and the odds are very much stacked against them.

Neville’s side take on Atlanta United next who currently sit in the final play-off slot and are five points ahead of Miami with just nine left to play for.

Two crippling winless streaks during this term have pretty much scorched Miami’s chances of making the play-offs and another three points off the back of a midweek 3-0 trouncing of Toronto were vital.

Beckham’s struggling franchise ended a six-game losing streak against the Canadians and scored their first goals in 396 minutes to bag full points.

With play-offs looking increasingly unlikely, the former England Women manager has at least proven that he can develop a side who can challenge and compete in the MLS.

A side led by a serial winner like Beckham cannot aim for anything but the top and the play-offs are the bare minimum, but Neville take some confidence in his side into the next season.