The family were said to be distraught after their £6 million Cotswold mansion was targeted in two botched break-ins over the last two months.

Yet David Beckham put the robberies in the back of his mind as he enjoyed a day out with daughter Harper, seven, at the National History Museum in London on Monday.

The former footballer, 43, seemed in high spirits as he watched his youngest child whizz around the ice rink, before stocking up on snacks for the journey home.

Happier times: David Beckham enjoyed a day out with daughter Harper at the National History Museum in London on Monday

Beaming broadly, he snapped photos and gave his little one the thumbs up as she showed off her best moves on the ice.

Bundled up against the cold weather, the youngster donned a fur-lined scarlet coat and ear muffs.

The pair were enjoying some daddy-daughter bonding time, and were not joined by David’s wife Victoria or their sons Brooklyn, 19, Romeo, 16 and Cruz, 13. 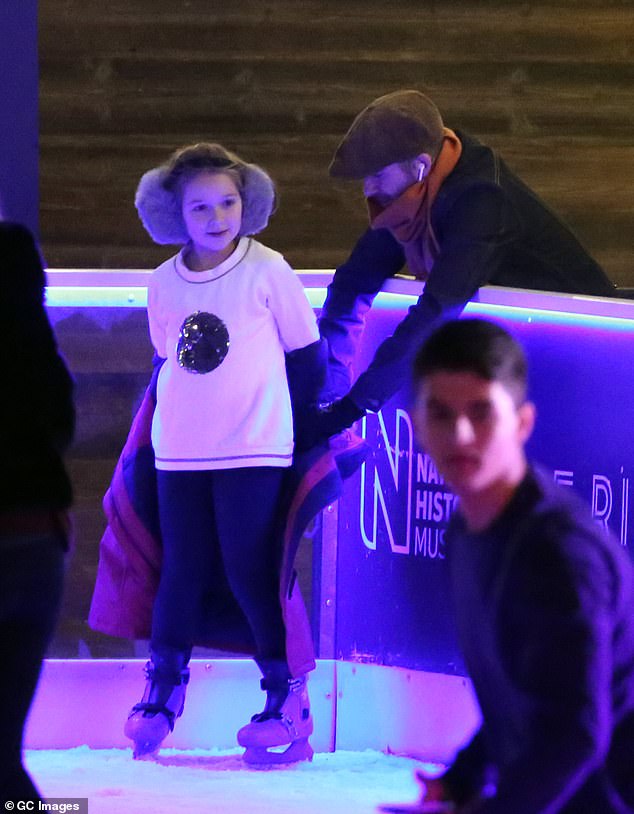 Fun day out: The former footballer, 43, seemed in high spirits as he watched his youngest child whizz around the ice rink, before stocking up on snacks for the journey home

Their outing comes after it was revealed a gang of travellers are said to be behind the raids on the Beckhams’ home.

The £6million mansion was targeted in two botched break-ins over the last two months.

The group – whose names cannot be revealed – have been linked to murders, drug dealing and extortion over the past 30 years. 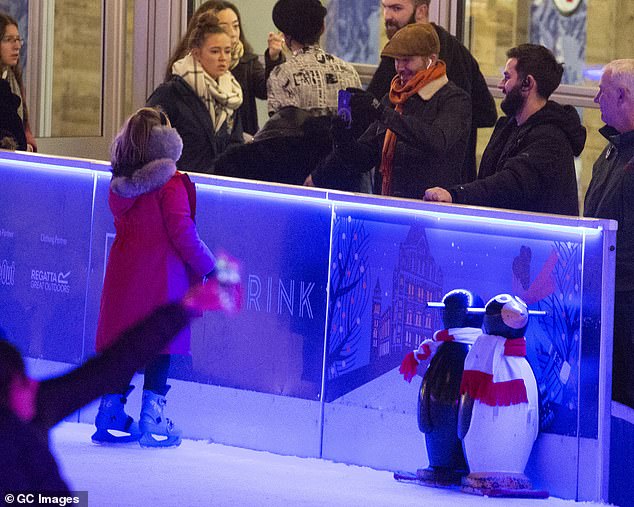 Smiling away: Beaming broadly, he snapped photos and gave his little one the thumbs up as she showed off her best moves on the ice 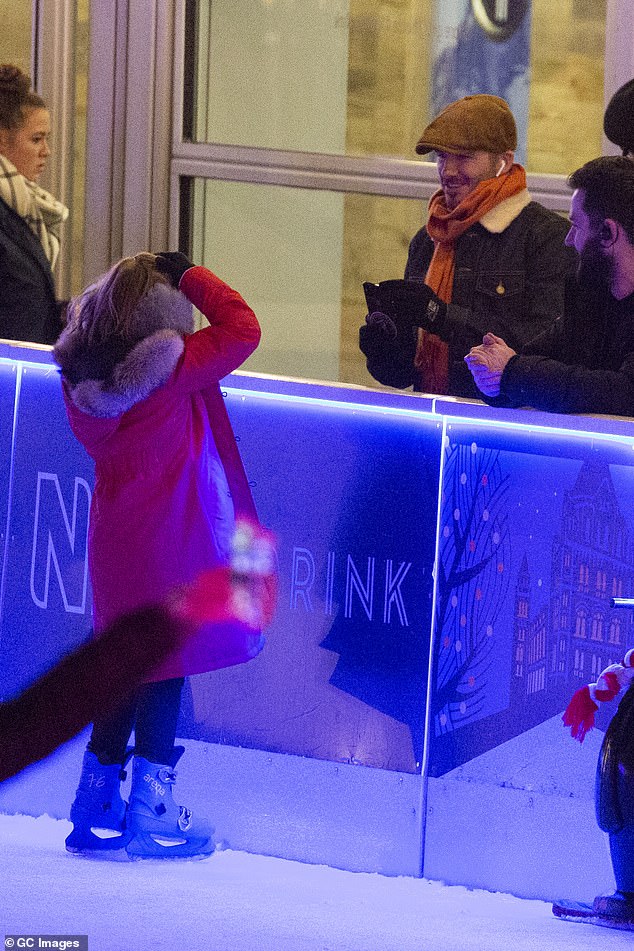 Cosy: Bundled up against the cold weather, the youngster donned a fur-lined scarlet coat and ear muffs 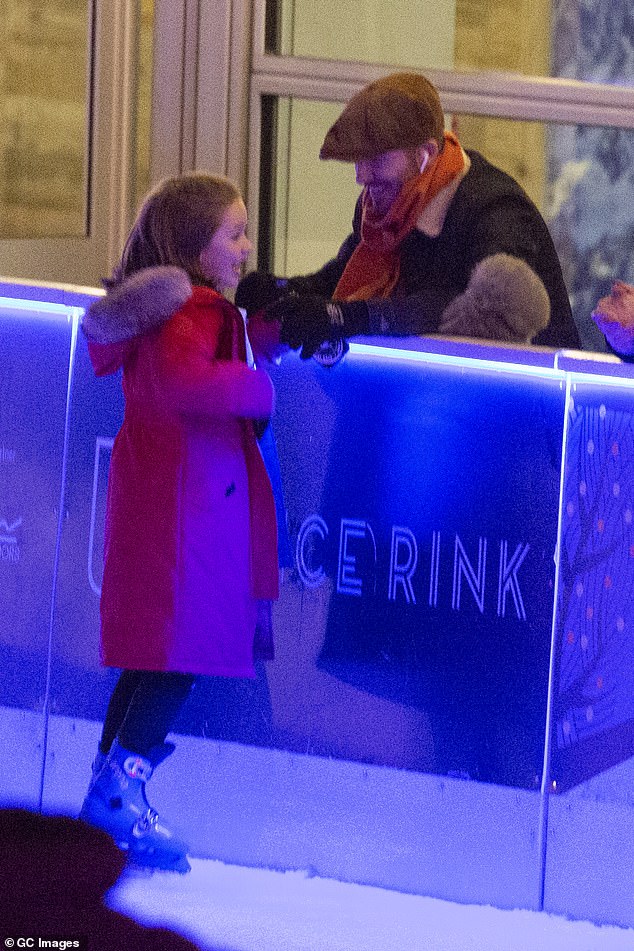 Two’s company: The pair were enjoying some daddy-daughter bonding time, and were not joined by David’s wife Victoria or their sons Brooklyn, 19, Romeo, 16 and Cruz, 13 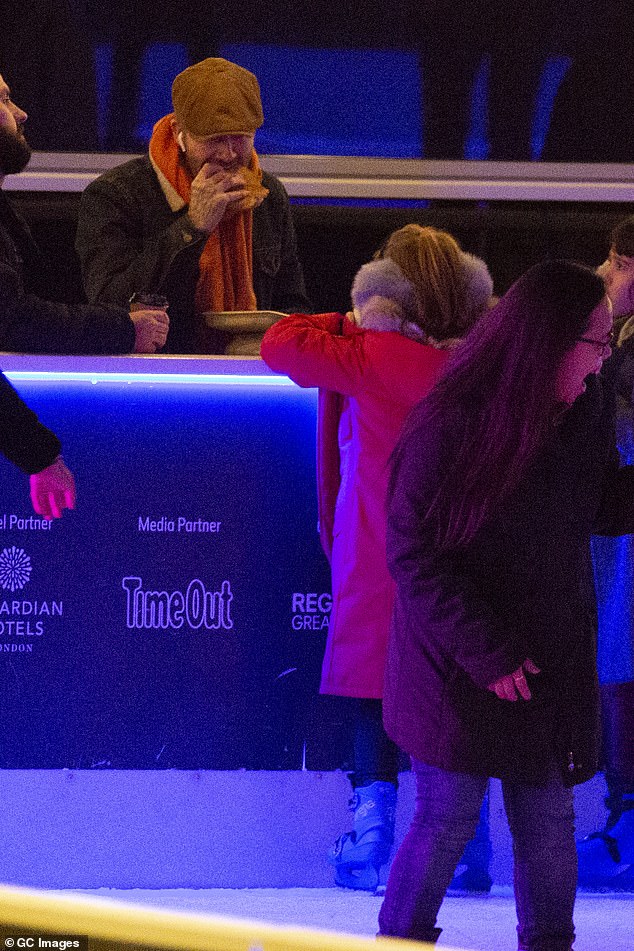 Yum: David tucked into a tasty treat as Harper made her way up to the rink 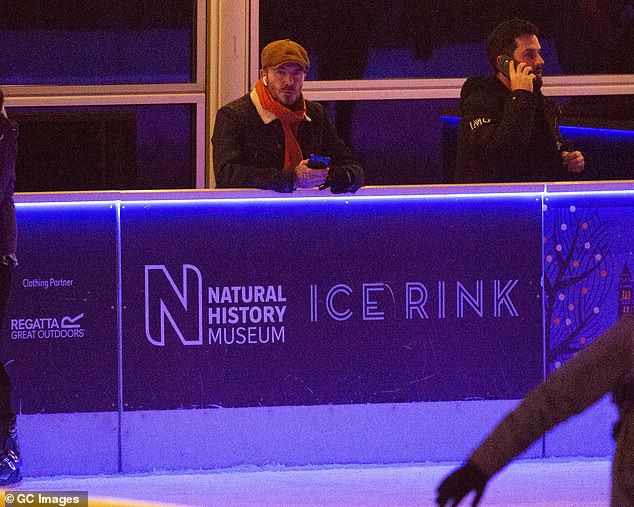 Out in the cold: David kept a watchful eye over his daughter as she zoomed around the ice

The family are based in the West Country and are known to carry out their crimes across southern England, Mirror Onlinereports.

David and Victoria Beckham were forced to up their security after the terrifying break-in at their family home.

The couple, who have four children were left distraught over the attempted burglary – which ended when the intruders were chased away. 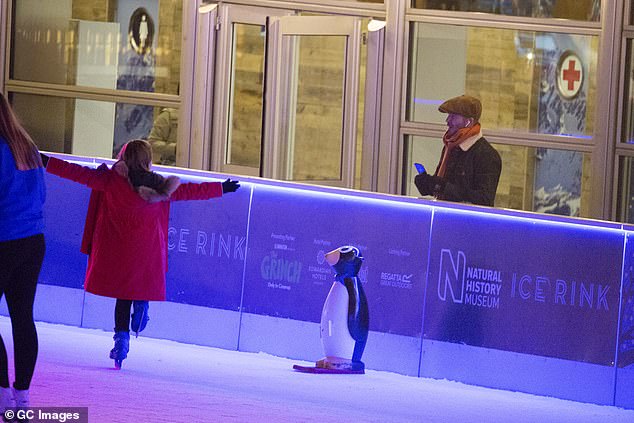 No help needed: Harper shunned the skating props as she zoomed off on her own 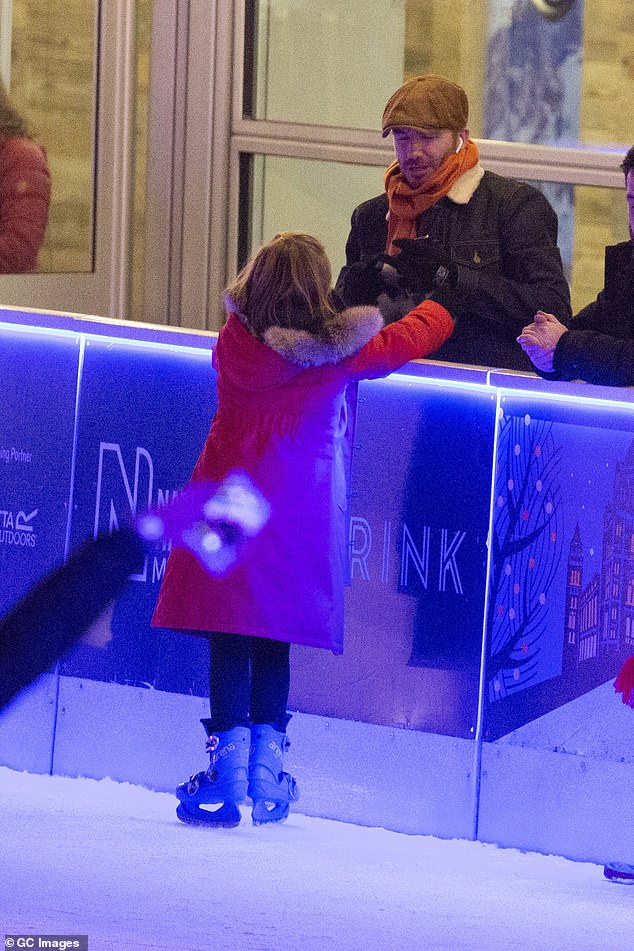 Doting: Harper leaned over and gave her dad a hug in sweet scenes on the ice rink

Police were called to the couple’s £6 million home in Oxfordshire after their 24 hour security surveillance team noticed the men on the property’s CCTV.

Now, David, 43, has now been forced to significantly increase security at the countryside home where he, Victoria and their children spend many of their weekends. 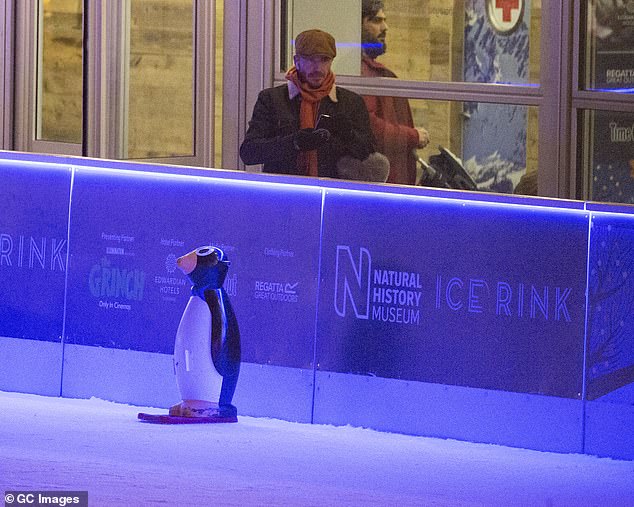 An icy reception: David was seen by himself waiting for his little one to skate back to him 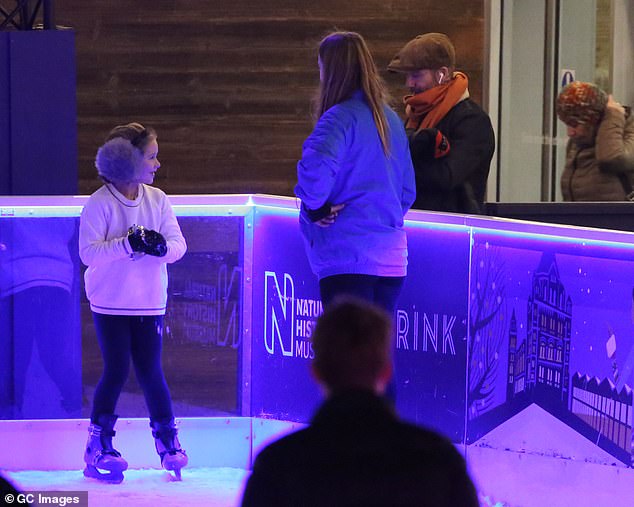 Loving life: Harper looked full of joy as she chatted with her dad

CCTV has shown how the trio, used a ladder to look into the windows of the upstairs of the house before running from the scene.

They were seen trawling the area and are thought to have been planning a break in. David and Victoria, 44, are understood to have been on their way to Australia with son Romeo, 16, Cruz, 13, and Harper, 7, when the attempted break in happened.

Hours later, Victoria Beckham was pictured looking distressed and speculation grew over what had happened. 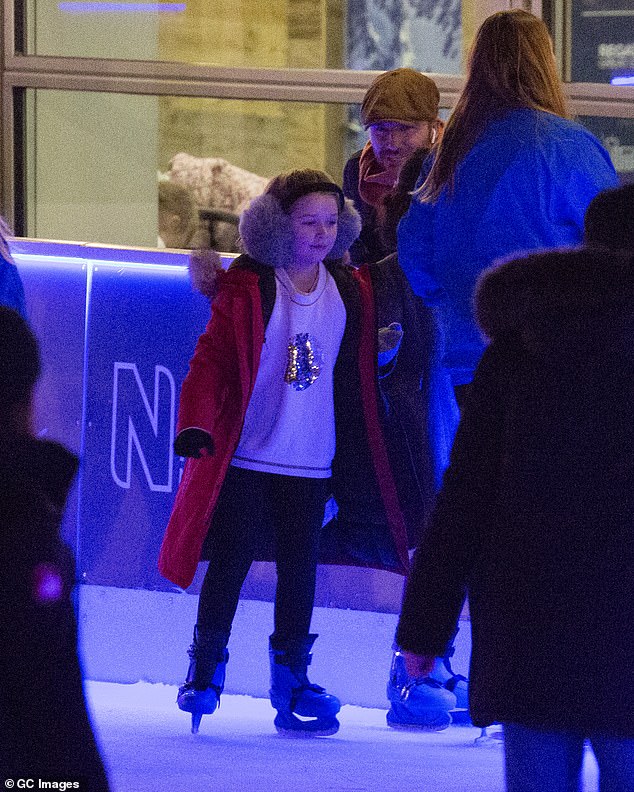 Words of encouragement: David cheered on his daughter from the sidelines but she may not have heard with her fluffy earmuffs on 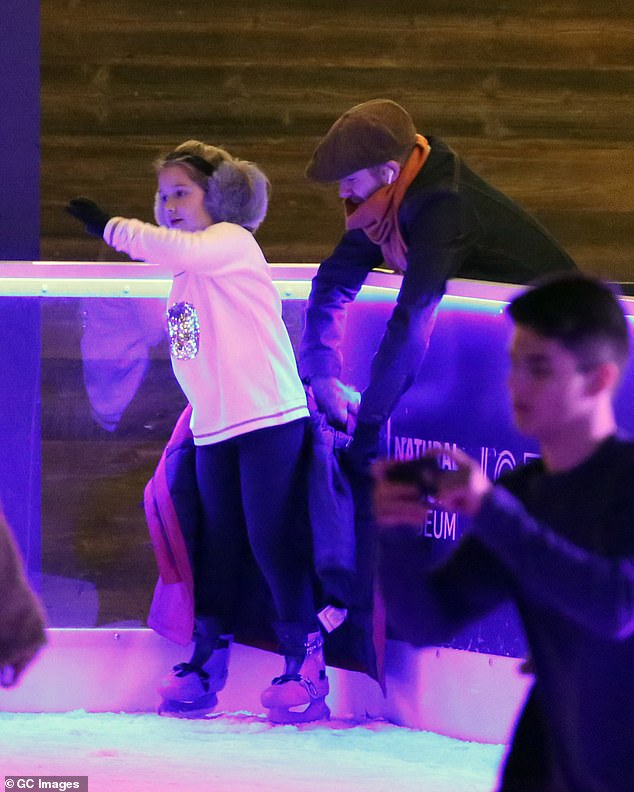 Need for speed: David helped Harper wriggle out of her coat as she took off on the ice

‘This has hit them hard. Victoria has been upset for the last couple of days about this, it has been so tough for her. It is frightening and dreadful to think someone would be intruding on their personal space. 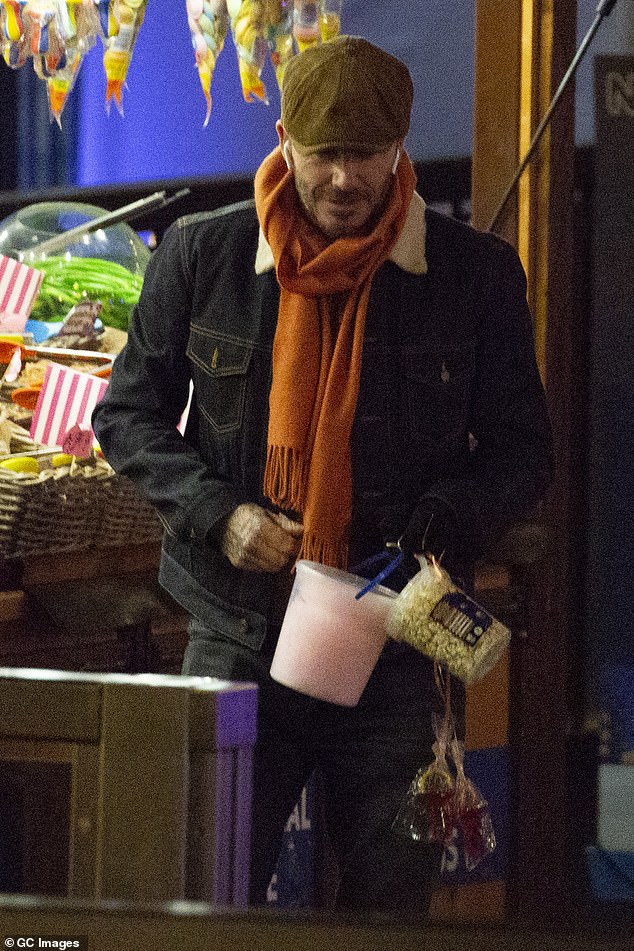 Snack time: David seemed in high spirits as he browsed the confectionery stand 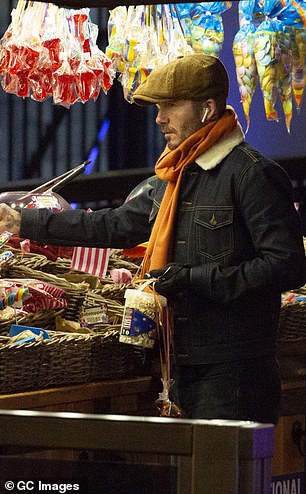 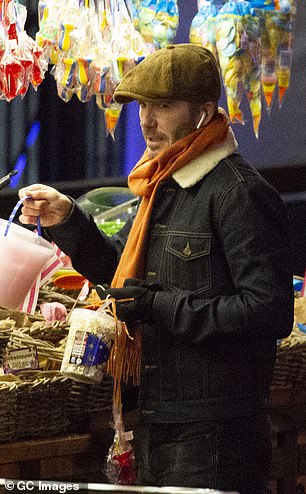 Yum: The former footballer seemed taken by the candyfloss on sale at the stand 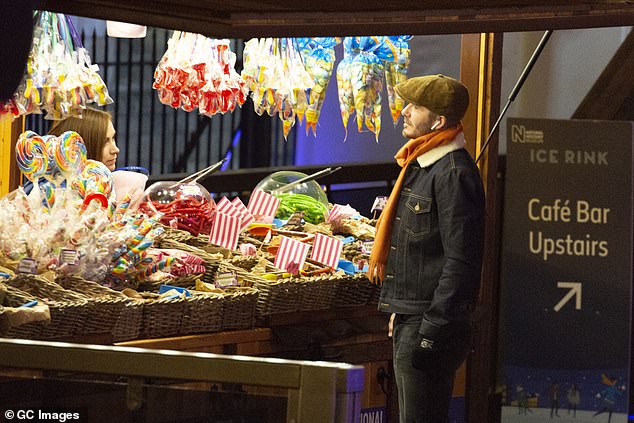 Taking his time: David was spoilt for choice as he browsed the snacks on offer 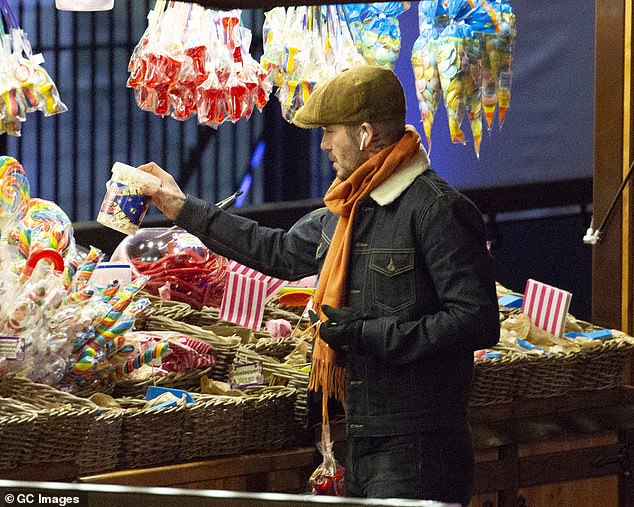 Once you pop you just can’t stop: David treated himself to some popcorn at the ice rink

‘He would love to be normal but his number one priority is to protect his wife, children and wider family. He is absolutely furious that he has now has to increase his security even more.’

Taking no chances, the security increase will include guard dogs, motion sensor alarms and regular patrols have now been installed to prevent any further intruders getting close to their home, which they’ve been refurbishing for nearly two years. 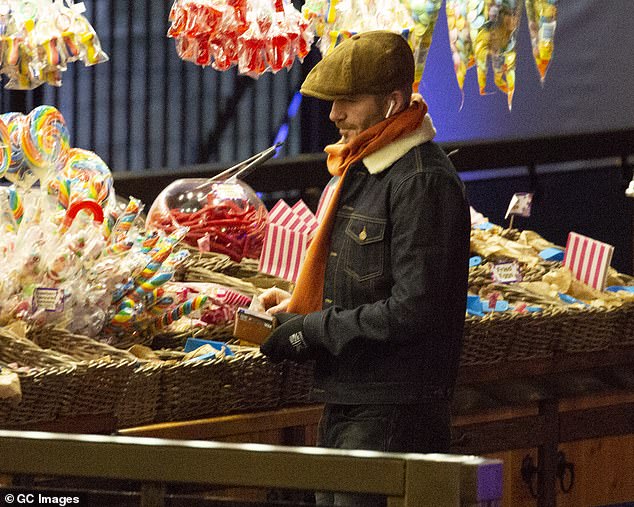 Pay up: David was seen digging deep to pay up for the snacks on offer